From time to time, Blizzard gives away free Hearthstone cards. Sometimes, they are good. But sometimes, as with the recently released free Legendary card SN1P-SN4P (pronounced “snip-snap”), they are great. Seriously, if you see this thing pop up while you’re playing a game of Hearthstone, you should be scared.

The card is a 3-mana Mech with 2 Attack and 3 Health, and it comes with a Deathrattle effect that summons two 1/1 Mechs when it dies. If you do the maths and add the stats of the Deathrattle minions to the base stats of SN1P-SN4P, you’ve got 4 Attack and 5 Health, which is already extremely powerful for a 3-Mana minion. Remember: In Hearthstone, 3 Mana is worth around 3 Attack and 4 Health on a minion or vice versa. Anything less, and its effect would have to be really good to justify its cost.

Anything more, and it’d need to come with some sort of drawback to justify its power level. Those two Mechs that are spawned when SN1P-SN4P dies aren’t a joke, either: Mechs have tons of synergy with other Mech cards, and even though they don’t seem like they pose a huge threat, they can get buffed by other cards if they’re not dealt with immediately. Very annoying. 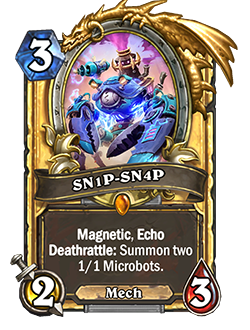 Not only does SN1P-SN4P have high stats and survivability for its Mana cost, but it also comes with the Magnetic and Echo attributes, which bring its power level to even greater heights. Magnetic means it can attach to other Mech minions, allowing it to buff other creatures and deal damage to the opponent on the same turn it’s played.

Echo means you can replay the card as many times as you want in a single turn. Since it costs 3 Mana and the Mana pool maxes out at 10, most players will only be able to play it 3 times in a turn, but if one were able to decrease its cost, it’d mean trouble. 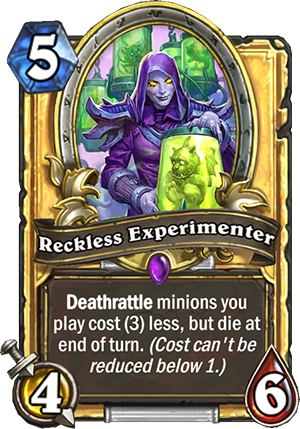 When the card was first announced with the “Rise of the Mechs” special event, players began to obsess over the combo potential of this card. Using a Priest card called Reckless Experimenter, Priests could discount SN1P-SN4P’s cost to 0 mana and, using the card’s Magnetic attribute, infinitely attach it to another Mech minion already on the board, allowing the Priest to stack infinite damage on the board and kill the opponent in a single turn.

As a result, Blizzard actually nerfed Reckless Experimenter so that it couldn’t reduce a card’s Mana cost below 1.

That doesn’t mean this infinite damage combo can’t be used in other scenarios. In Hearthstone’s Wild mode, where players can use every card that’s ever been allowed in competitive play, Warlock players can combo SN1P-SN4P with a card called Mechwarper, which reduces the cost of all Mechs by 1, and another card called Summoning Portal, which reduces the cost of all minions by 2, to pull off the combo in a more roundabout way.

Some streamers have put together compilations of all the existing infinite damage SN1P-SN4P combos, but many of them are so hard to pull off that they’re not actually viable in competitive play.

The thing is, even without the ability to use SN1P-SN4P infinitely in a single turn, it’s still ultra-powerful on its own. According to the Hearthstone stat-keeping site HSReplay.net, it’s currently played in about 26.7 per cent of decks, making it the second-most-popular card in the game after another extremely powerful Mech called Zilliax.

Decks that use SN1P-SN4P average a 55.6 per cent win rate, a full 5.6 per cent more than the baseline 50 per cent average win rate that one should typically expect from any given deck. It’s a high-power, high-versatility, high-synergy card, and it’s free until July 1.