1999’s Crash Team Racing for the original PlayStation is a kart racing masterpiece, equal parts challenging and charming. Crash Team Racing: Nitro-Fuelled for the PlayStation 4, Switch, and Xbox One is essentially the same game with a ton of extra content, lush modern graphics, and a bonus old-school throwback—really long loading times.

But before we can have a kart racing party, all the guests have to arrive, and that takes a bit of time. Let me get this out of the way first, because otherwise we’ll be here all day.

The load times in this game are atrocious. They’re not as bad on PlayStation 4 Pro as they are on Switch, but they’re still pretty lengthy. Yes, Beenox has done an outstanding job of making the ageing courses from Crash Team Racing and Crash Nitro Kart look vibrant and beautiful again. Here is the original Coco Park track.

And here is the new and improved version, running on the Nintendo Switch. 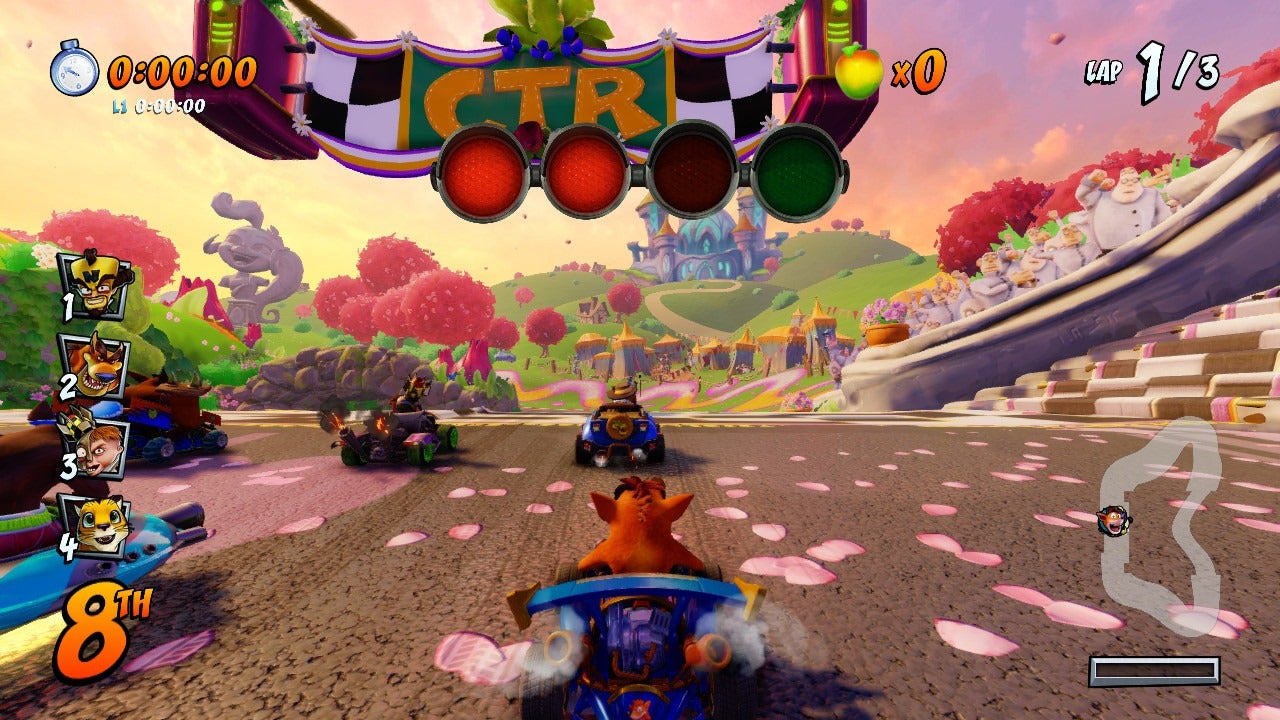 Gorgeous, right? Unfortunately the cost of turning the smudge at the top into the Coco Bandicoot wonderland on the bottom is at least 40 seconds of loading time in docked mode. I tried to make a GIF to demonstrate how frustrating that is. Try to watch it. Or just skip it, because you can.

On my PlayStation 4 Pro, the average load time is about 20 seconds. That’s not horrible, but certainly long enough to make me wish the solid-state drive consoles of the future were already here.

Upon entering a race, players are treated to a brief fly-by tour of its landmarks, which they should really soak in. Once the start light turns green, there’s no stopping to admire the scenery. Crash Team Racing was never an easy kart racer. I’m happy (I guess) to report that is still the case. Corners must be hugged. Brakes must be utilised on tight turns.

The game’s unique tri-level power-slide boost mechanic, requiring that players time button presses while drifting for a burst of super-speed, must be utilised. Strategic use of power-ups is highly recommended, like holding missiles and bombs for just the right moment and placing obstacles like TNT crates and poison beakers in areas opponents are most likely to race over. Anything less can quickly turn a substantial lead into a fifth- or sixth-place finish.

Players of more modern kart games might have trouble getting used to the aforementioned power-slide boost mechanic, which is a tad more complicated than today’s simple slide-and-speed action, but it’s nothing three or four races and a couple of minutes of loading time won’t solve.

Easy is a great way to get used to the game’s driving mechanics and the perfect difficulty to blast through single-player Adventure mode, unlocking boss racers, new decals, and kart parts along the way. Progressing through Adventure mode requires first-place finishes, so a little slack is appreciated.

Where the original game locked players into one character and kart in Adventure mode, a new “Nitro Fuelled” mode allows players to swap racers and customise karts on the fly, making the mode a great place to test out the strengths and weaknesses of the various racers as well. 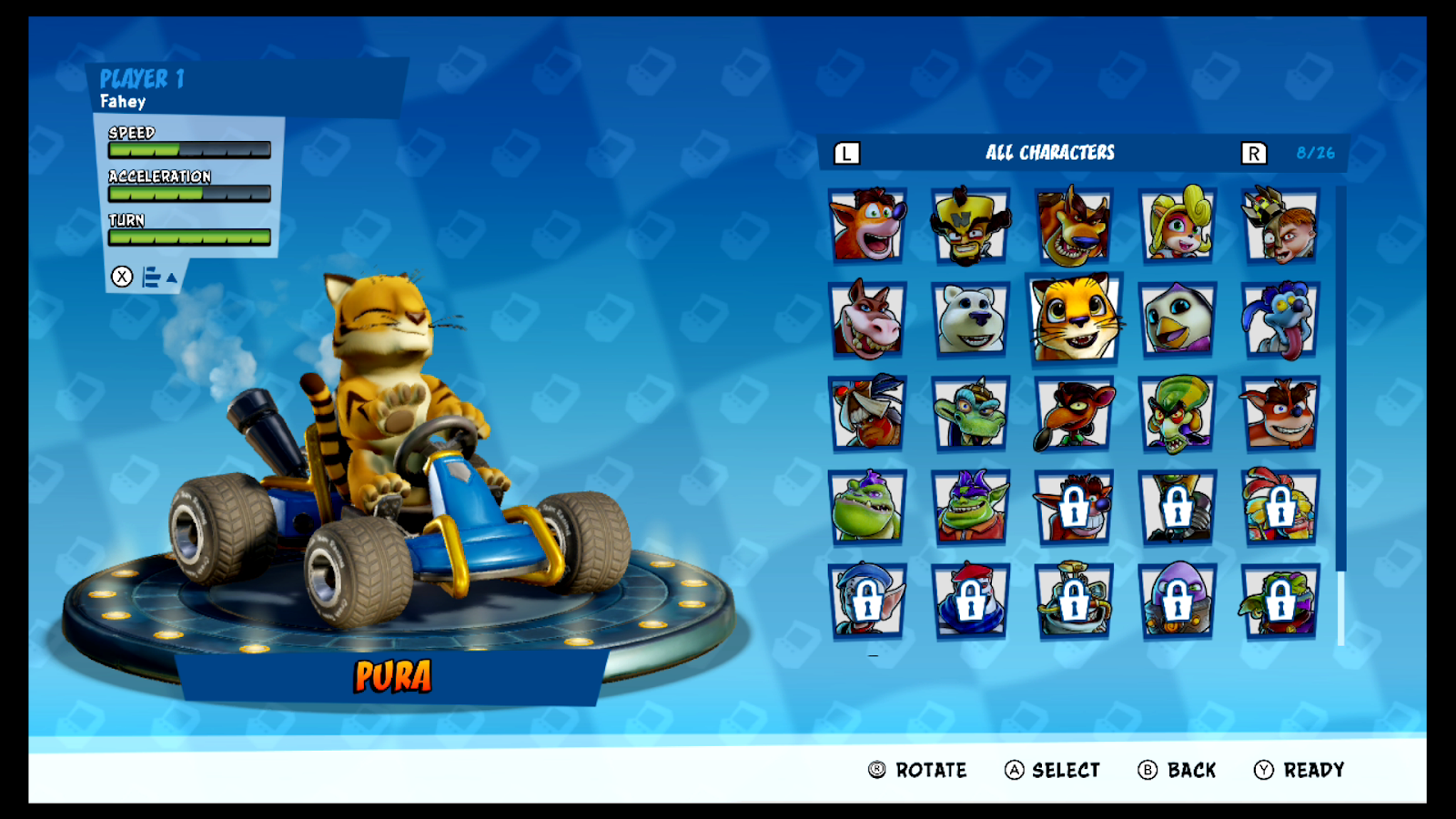 Adventure mode is, as it was, a series of themed areas connected together by tunnels. Completing all of the races in one area unlocks a race against a boss character. Defeating that boss character unlocks the next area and unlocks the boss as a racer. Complete all four areas and the player gets to race against the alien Nitrous Oxide for the fate of the planet. 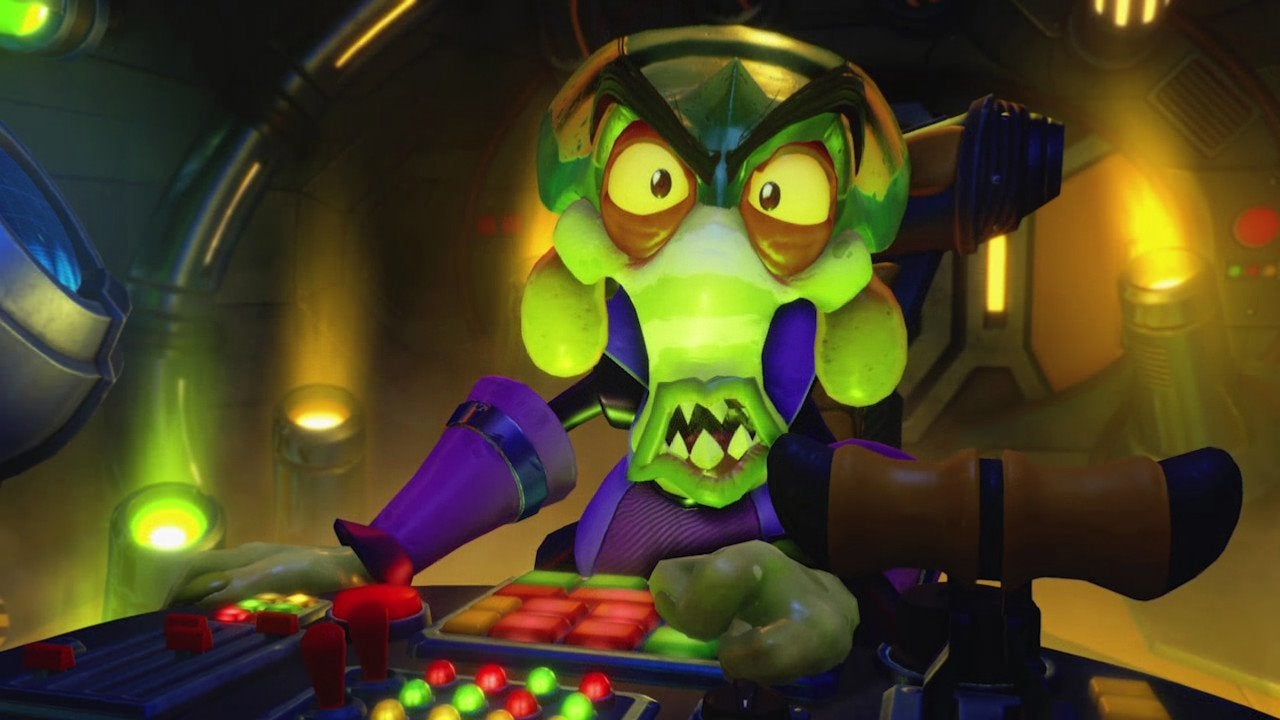 Beating the boss of Adventure mode the first time unlocks a slew of challenges on the modes map. Players can participate in relic races against the clock or collect coins in special event courses to unlock Gem Cups, which are special tournaments against CPU opponents. In order to truly finish Adventure mode, players must collect all the gems and keys and relics and coins, then challenge Nitrous Oxide one last time. It’s a whole lot of racing.

There’s a lot to do outside of Adventure mode as well. The Local Arcade mode is where the game really opens up, giving up to four players access to all 31 tracks in the game. There are basic races and four-track cup tournaments. Time trials, relic races, and CTR token challenges give players new ways to conquer tracks.

The game also features 12 different battle arenas, where up to four players can play a variety of more direct multiplayer modes, like capture the flag, crystal grab, or my personal favourite, steal the bacon, in which players must grab a piece of bacon and return it to their home portal before their opponents. As an extra bonus, battle arenas only take 15 or so seconds to load on the Switch. No, I won’t leave the load times alone.

What I will leave alone is the kart and character customisation. Normally customisation is a feature I crave, but I’m just not that into most of Crash’s characters to care what colour they are or what wacky costume they are wearing. Bigger fans will appreciate the feature more, I’m sure, grinding those races for coin to purchase the latest rotating cosmetic gear from the Pit Stop shop. No, you can’t buy currency with real money. 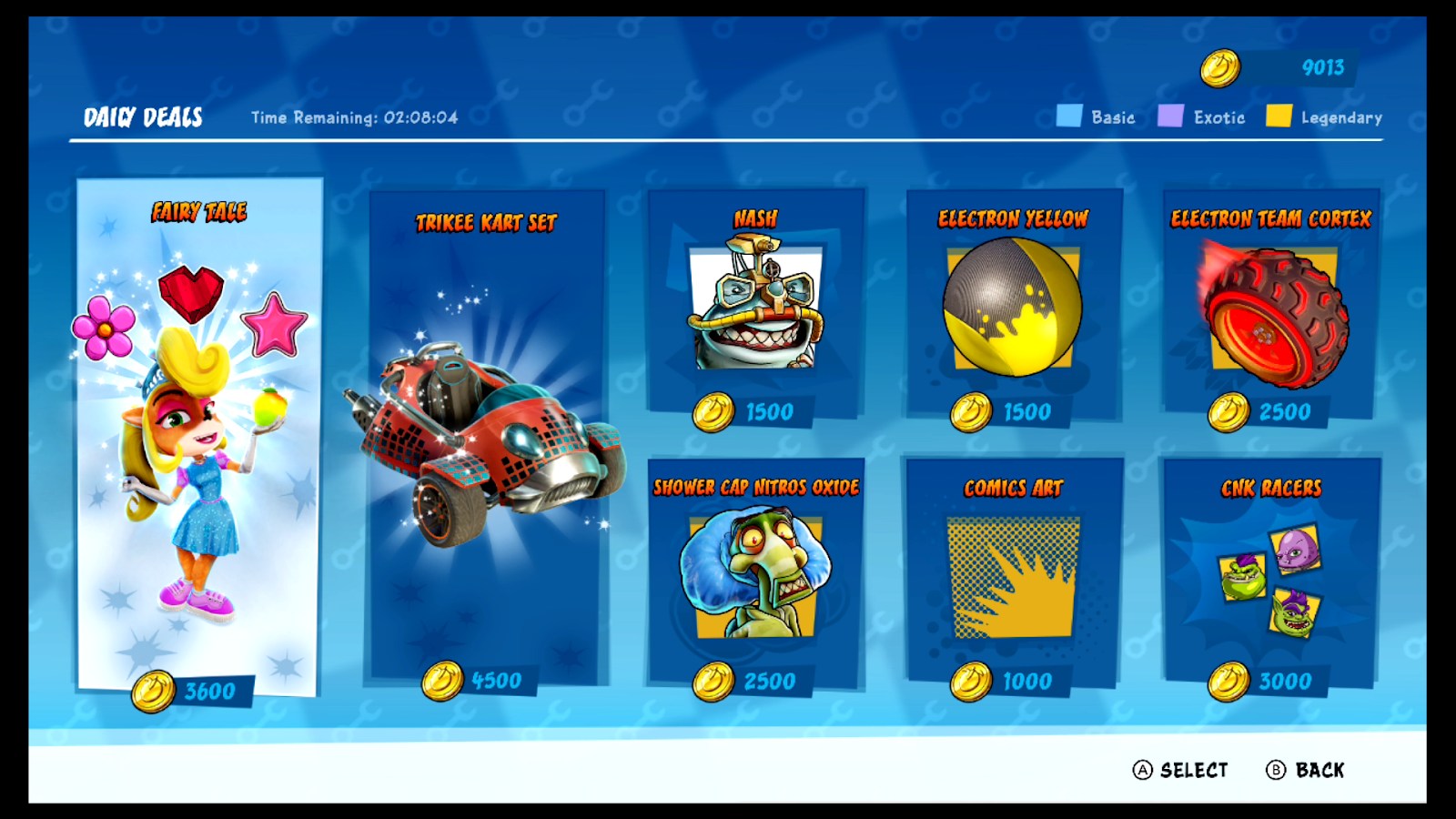 Unfortunately, I’ve also been left alone while playing my early copy of Crash Team Racing: Nitro-Fuelled, so I’ve had zero experience playing online. For many kart racing aficionados, online multiplayer, a feature the original game lacked, is a big draw. I can honestly say that of this writing I have no earthly clue how, or even if, it works. If there are any major problems, I’ll update this post.

But hey, we didn’t have online multiplayer in the original Crash Nitro Kart. Back then we were lucky if we had analogue sticks. Now we’ve got a slew of ridiculously colourful race tracks, dozens of rides to customise, and animalistic racers that are less polygonal and pointy and more soft and cuddly. If we have to wait 20 to 40 seconds to enjoy them, so be it.