This is the GameShell, a retro gaming handheld that I built from a kit. I clipped and trimmed the plastic pieces, inserted the circuit boards, connected the wires and snapped it all together. It plays old games, emulated titles and homebrew software. It’s pleasing that something I built does those things.

The folks at Clockwork did most of the work, to be fair. They created the ClockworkPi, the small development board that powers the GameShell. It’s a small chip powered by a quad-core Cortex-A7 CPU, a Mali GPU and 1GB DDR3 memory. It’s got Wi-Fi and Bluetooth, a micro HDMI port to output to a monitor and a slot for a micro SD card for storage. It’s an excellent base for a modestly-powered portable emulator box.

Along with the ClockworkPi, the GameShell also has a 8cm TFT RPG display that runs at 60 frames-per-second. There’s an input board with a directional pad, ABXY buttons and a couple of additional inputs. There’s also a tiny two-channel speaker, a 3.7V 1200 mAh rechargeable battery and an optional row of five additional buttons that can snap onto the back of the GameShell’s case.

I mention these components separately, because that’s how they are assembled. Here’s what comes in the GameShell kit. 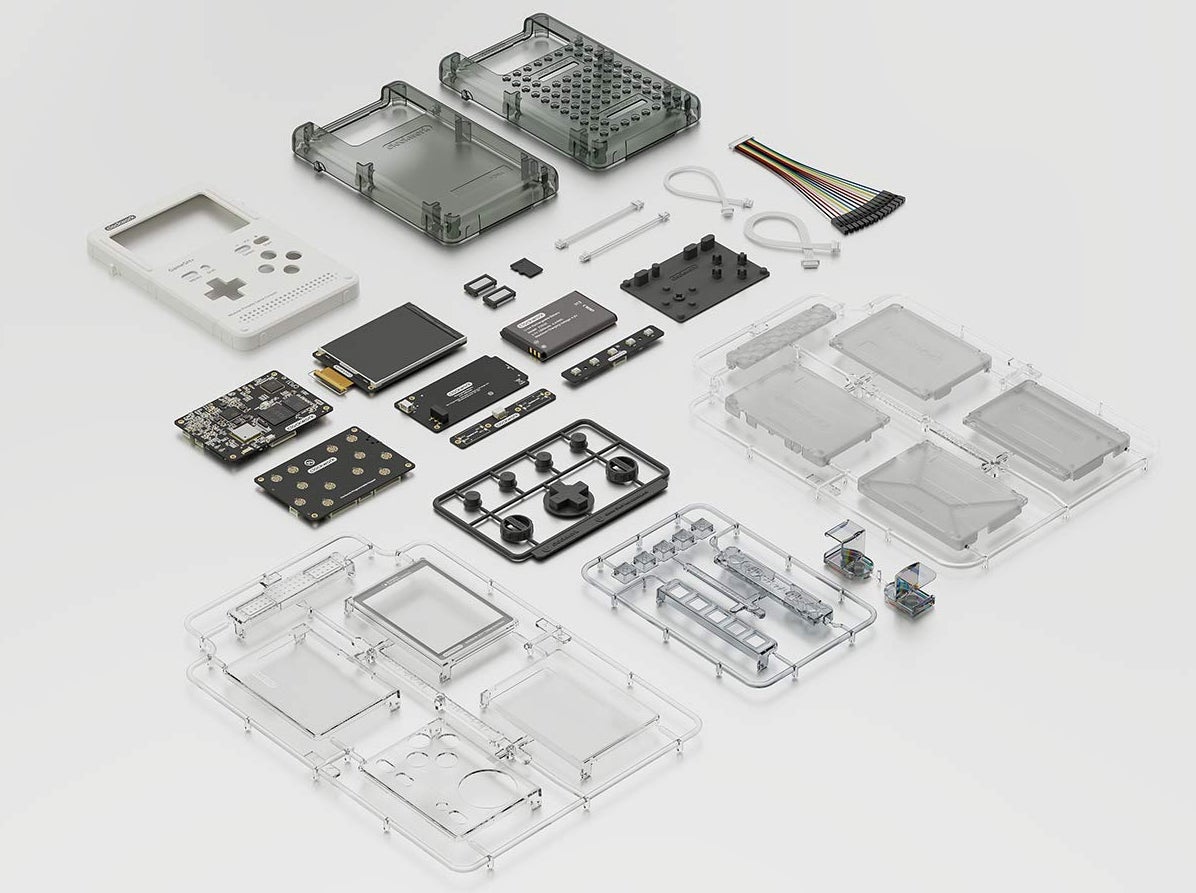 It looks like a lot, but it’s really simple. There are four main modules encased in their own plastic housings—the ClockworkPi, controller pad, display and battery. Once assembled, cables connect the ClockworkPi to the three other units. They are stacked within a Game Boy-esque plastic housing, two on two. The speaker bar is plugged into the main bar, and the unit is snapped together. 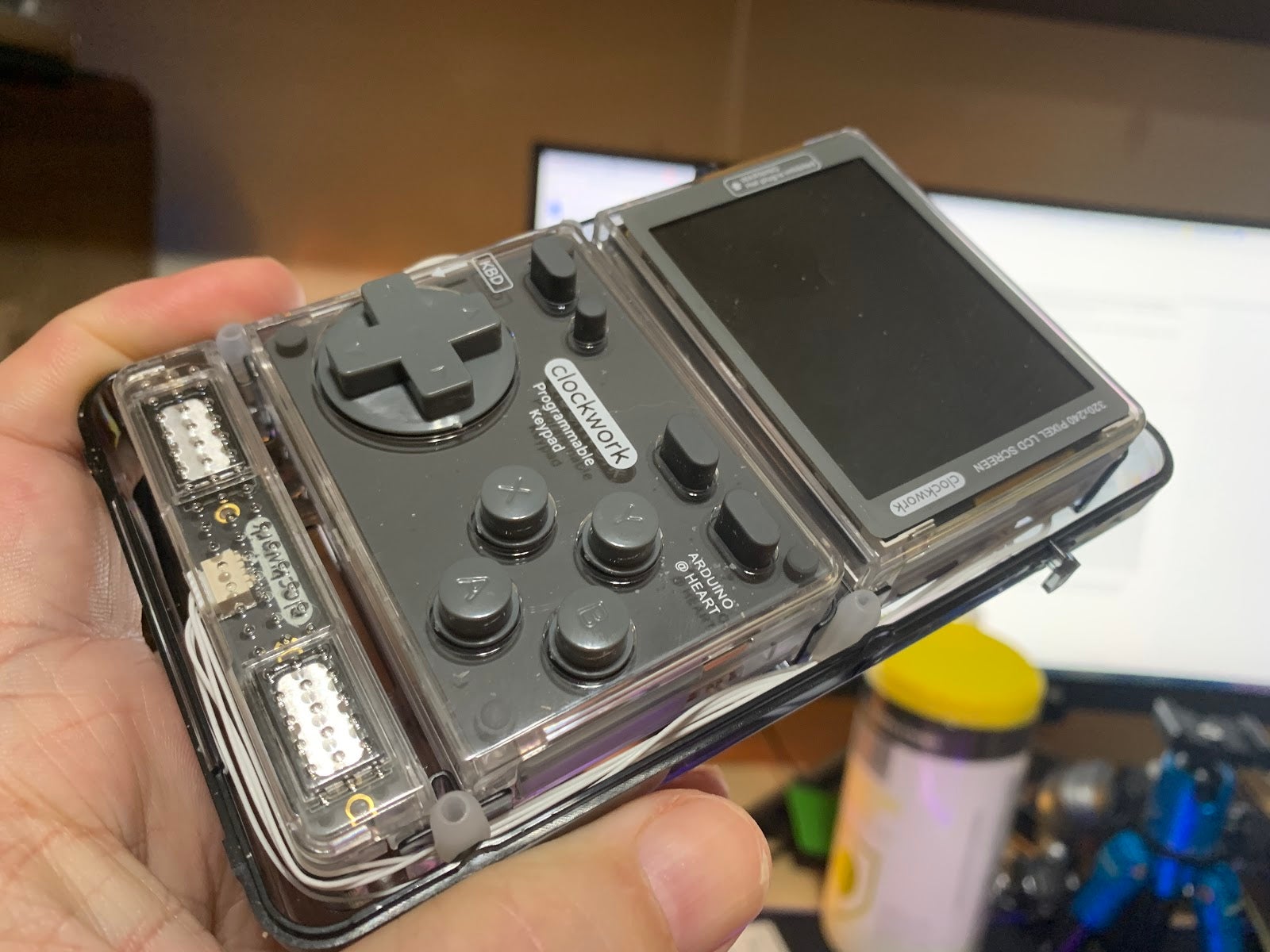 It’s a simple build that’s hard to screw up. If one were to say, bend the pins connecting the main board to the controller, that might make it harder to get it working. Also, from what I have heard, the screen will not survive being run over by a 213kg motorised wheelchair. But that’s what replacements were made for, right? OK, I made a few mistakes, but those were on me, and eventually I wound up with a nice little handheld that I could probably strip down to component parts blindfolded. 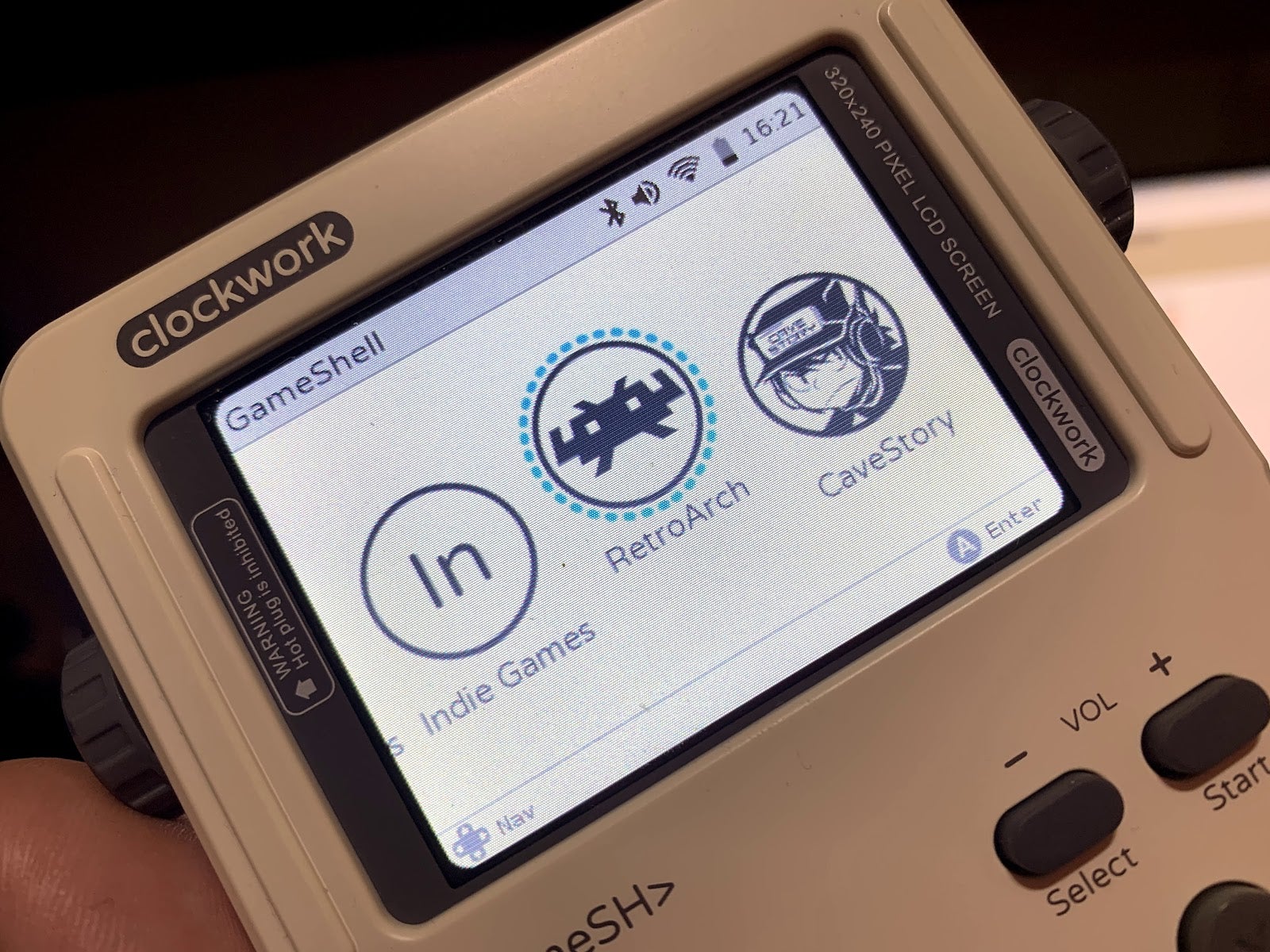 Once assembled, the GameShell is a tiny handheld Linux device. The 16GB micro SD card that comes with the kit is preloaded with Clockwork OS, based on Debian 9 ARMhf and Linux mainline Kernel 4.1x. It comes loaded with popular emulator front end RetroArch, and can run up to Super Nintendo and Sega Genesis games quite capably. There’s a standalone emulator for the original PlayStation, which can be hit or miss.

It comes loaded with the original Cave Story. There’s a free version of Doom on it, because any gaming system has to run Doom in some form in order to be validated. It even has a built-in music player, which I will never use. 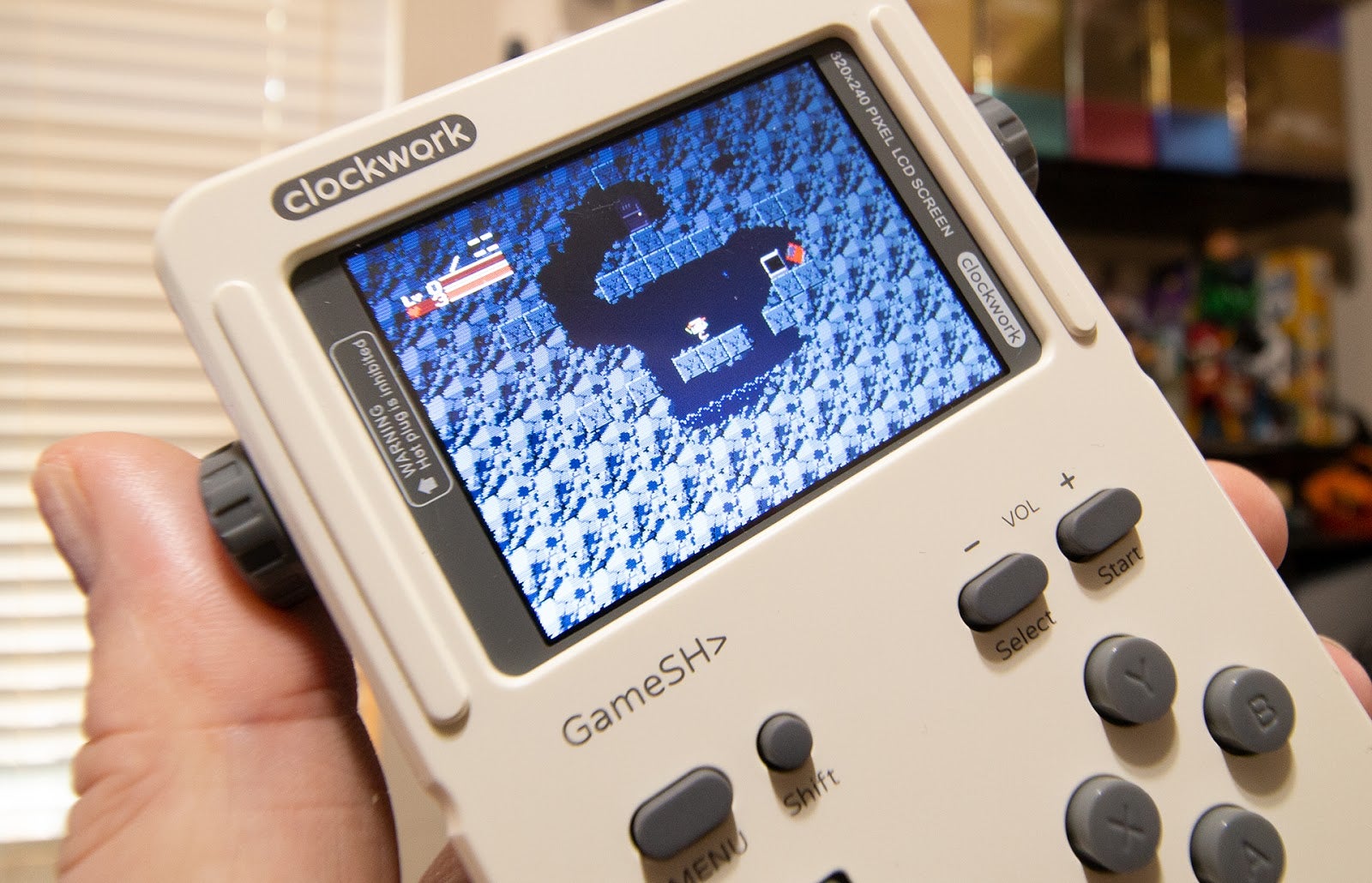 With its Game Boy look and feel and its pleasantly responsive controls, the GameShell is nice to play games on. I feel like game makers and electronics hobbyists will get the most out of the system. It supports Preset C, Python, Lua, JS and LISP programming languages and supports a slew of smaller-scale game engines, including PICO 8 and LOVE2D. It’s open source hardware, so users are free to take it apart, wire it to other devices and fiddle to their hearts’ content. The studded backplate used to connect the optional five-button input bar to the back of the GameShell is even Lego compatible. 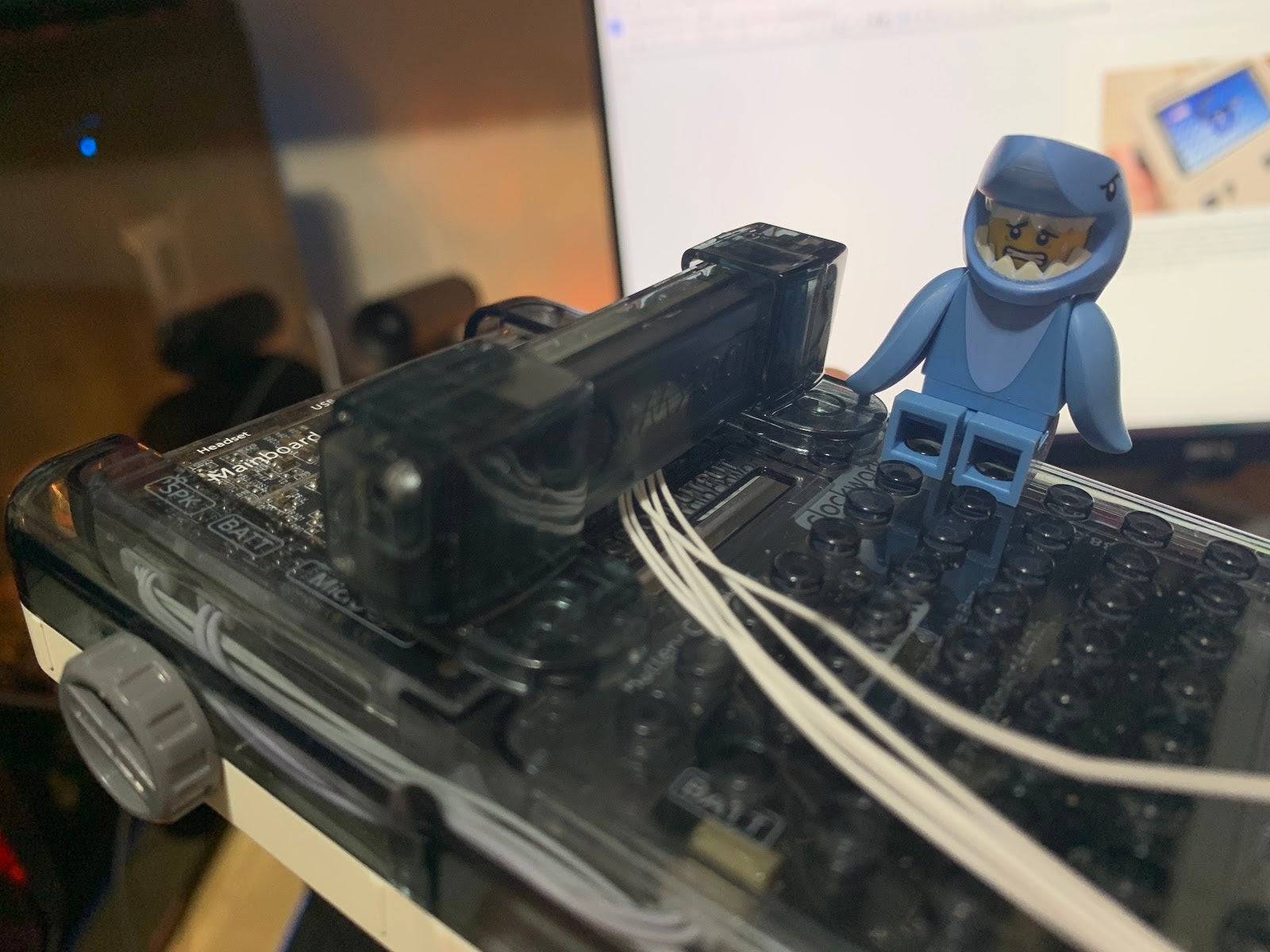 There’s a lot to do with Clockwork’s GameShell. I don’t know if I will ever build a game or program the GameShell into a television remote, but I will always be proud of this quirky little piece of hardware I put together.