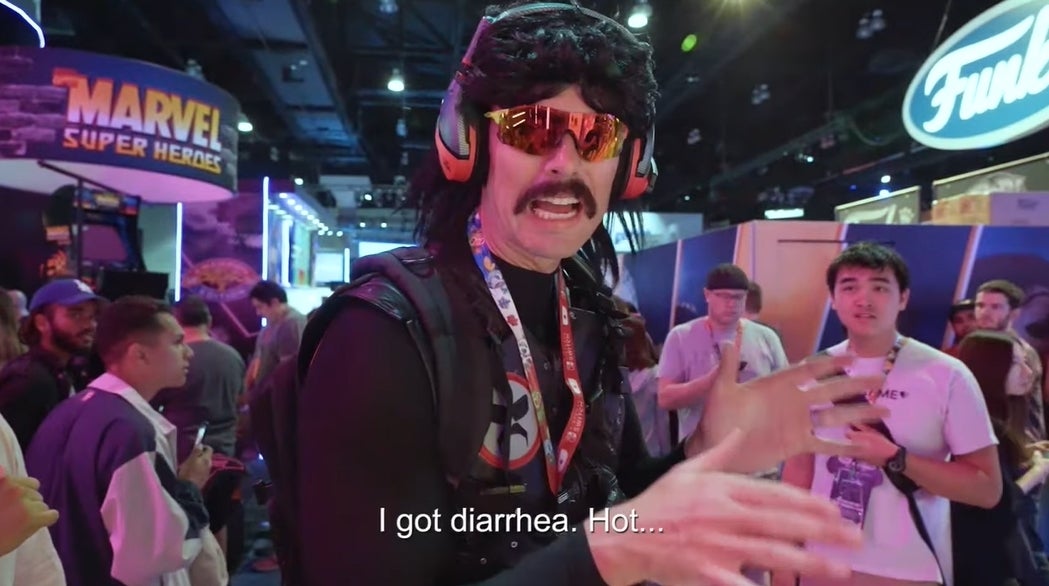 Image: <a href="https://www.youtube.com/watch?v=Uz_2U3lHyys&feature=youtu.be">Dr Disrespect</a>
To sign up for our daily newsletter covering the latest news, features and reviews, head HERE. For a running feed of all our stories, follow us on Twitter HERE. Or you can bookmark the Kotaku Australia homepage to visit whenever you need a news fix.

Last week, Dr Disrespect, a popular streamer who parodies toxic gamers by just straight up being one (except in a wig), got banned from Twitch and booted from E3 for streaming from inside a public bathroom, an act that’s illegal in the state of California. Immediately after, he went radio silent. But not for long.

While Dr Disrespect remains banned from Twitch for a still-unknown period of time, he’s resumed posting to Twitter and YouTube. Last Thursday, he broke his silence with a tweet promising an E3 recap video and saying he’d “fired” his director, whose name is apparently Alex. This, however, was likely a reference to a long-running joke in which Doc yells off-screen at Alex, who fans aren’t even sure is a real person, and sometimes ‘fires’ him.

Dr Disrespect proceeded to spend the next 24 hours talking trash to other big streamers (mostly Ninja) on Twitter.

The recap video dropped over the weekend and largely depicts Dr Disrespect interacting with fans and developers, talking shit about mobile gamers, and yelling a lot. In line with his Whole Thing, it’s heavy on bravado, bluster, and cheesy ‘80s music. It only briefly alludes to the bathroom incident, with Doc complaining about “diarrhoea” toward the end of the 11-minute video and then running into a bathroom. It then cuts to a now-infamous shot of him standing in a stall with only his head visible, referencing a portion of the stream that got him banned. He doesn’t discuss his ban, apologise, or otherwise reference the E3 incident.

Dr Disrespect has also used his mandatory time off to create new Twitch emotes of himself peeking out from a bathroom stall. I’m sure they’ll get plenty of use when he inevitably returns to Twitch in the coming days or weeks. After streamers reach a certain level of magnitude on Twitch, suspensions and bans only turn them into bigger stars—a phenomenon Doc himself is already very familiar with.