Fallout 76’s Battle Royale Mode Is An Odd One 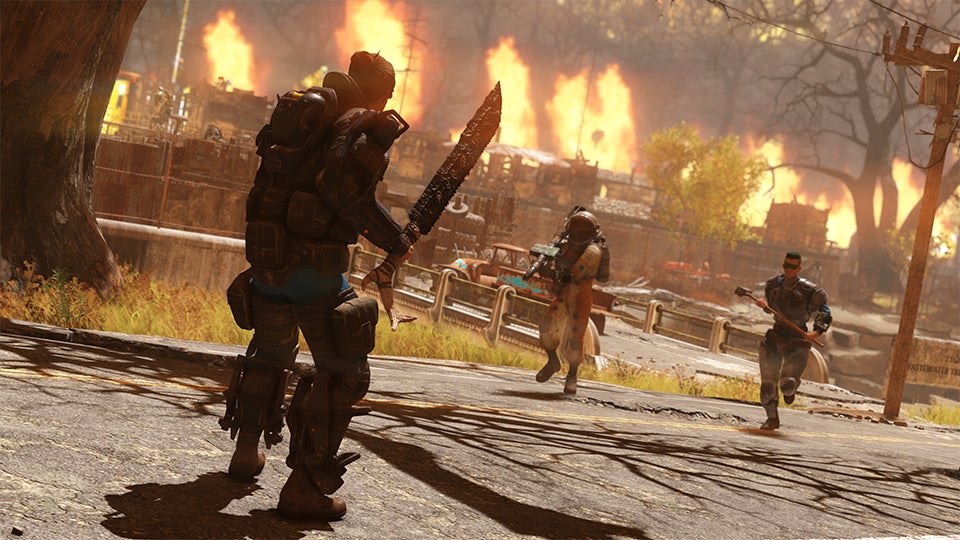 It’s become a joke at this point: If an online game is in trouble, the fastest way to turn it around is by adding a battle royale mode. It’s funny because it’s true—that’s how Fortnite turned things around, and what game studio wouldn’t want to dramatically snatch victory from the jaws of defeat? The developers of Fallout 76 certainly would. Surprisingly, it’s actually pretty fun.

The beleaguered-yet-fascinating online game has slowly been working toward becoming more recognisably Fallout, but it’s still going to be some time before the big stuff, like non-player characters, is introduced.

In the meantime, we have Nuclear Winter, a 52-player battle royale mode set in the forest region of Appalachia. You can play it from now until June 17, while the mode is available in “sneak preview.” Fallout 76 proper is also free during this period.

I already like the conventions of battle royale games a lot. A bunch of unarmed players on a map, scrounging for weapons and gear as they fight to be the last one standing in a constantly shrinking safe zone? I love that shit. It’s a naturally dramatic format that allows for loads of variety and plenty of tension without even switching to a different map. Add in the idiosyncracies of the particular game you’re playing—the building of Fortnite, the fluid movement and character abilities of Apex Legends, or the reliable, familiar gunplay of Call of Duty’s Blackout—and the genre has a ton to offer.

So what does Fallout 76 bring to the table? Well, it’s odd. Odd in the ways Fallout 76 is. That is to say: It is a perplexing and dissonant take on familiar ideas that also seems to be barely holding it together. But hold together it does, and the strangeness of it all is compelling.

In Nuclear Winter, your regular Fallout 76 character is stripped of all items and perks (cosmetics remain, of course) and you’re given a new set of perk cards, drawn from a brand new deck of Nuclear Winter-specific perks.

When you load into a world from the game’s menu, you’ll find yourself in Vault 51—the Vault that, in the fiction of Nuclear Winter, had no Overseer, because it was designed to facilitate this bloodsport instead. Be the last one standing, and congrats: You’re the Overseer.

It’s not a premise that holds up to scrutiny (what will be left for you to oversee?) but it’s the exact kind of frivolous black comedy that latter-day Fallout has traded in, and there is apparently more to learn here.

As you play matches, you rank up your Overseer level, which is independent from your character level in the main game (although playing Nuclear Winter will net you some XP for Adventure mode, too). The higher your Overseer level, the more of Vault 51 you can explore in the time while you wait for a match, time you might be able to spend learning more about the social experiments that took place in its corridors. It’s a neat hook, even though I’m not sure how compelling it might be. (Mostly, people just punch each other here.)

What is compelling is actually being out there, doing battle royale nonsense in Fallout 76. Nuclear Winter comes alongside an update that tightens up the gunplay across all modes, and while shooting guns in Fallout games will never feel as tight as shooting guns in other games, it does feel better than it’s ever been—at least on PlayStation 4, where I played.

The map in Nuclear Winter is small, and you don’t drop onto it—rather, you pick from a set of about 20 spawn points on the map with your squad. You can’t see where anyone else is spawning, but you can see where your squadmates have chosen, and smart money is on spawning there with them.

Once the match is ready to begin, you can see everyone’s spawn point and get an idea of how crowded your start is going to be. It’s a bare-bones alternative to actually flying in, but I like it a lot.

Once you’re out there, you’ll gather gear from the usual lockers and bags in the wastes, but you’ll particularly want to look out for small, medium, and large supply crates, which always have a weapon and ammo of some sort, and usually have armour. Find one or two of them, and you’ll be kitted out enough to survive a scrape.

The peace of mind that comes with this loot system is nice, but it can be hard to find loot. There aren’t nearly as many lootable objects in Fallout 76 as there are in previous Fallout games, and many of its buildings are boarded up and inaccessible, which can leave you flailing in the open with nothing significant to defend yourself with.

There are creatures roaming the map, too. Not many, and most aren’t all that threatening—just the odd mirelurk or hound. Occasionally though, things will get extremely threatening, like when a Scorchbat arrives to mess you the hell up.

I played a few hours of Nuclear Winter and wanted to play more. Granted, my squad won our first match by being a bunch of vigilant cowards, and that did a lot to endear me to the game. But even as I had less successful matches (and one really thrilling match where my last squadmate and I beat the last remaining squad as a Scorchbat tried to blow us all to hell), I found Nuclear Winter to be a whole lot of fun, as cynical an addition as it may seem.

Besides, Fallout 76 is an extremely cynical game already. It’s not narratively cynical, with its strangely optimistic story about resettling the post-apocalypse. But it takes everything Fallout games were sceptical of—the cheery optimism of the Greatest Generation, the extent to which we can actually “rebuild” a society that doesn’t merely repeat the flaws of the old one—and eschews them in favour of playing with all the kitschy iconography the series has accumulated.

Nuclear Winter is the logical end of this line of thinking: a premise that abandons all pretense of making the world safe for the reinstitution of civilisation and society and instead just lets us all kill each other, with nukes, even, if you can find them. (Just like in the base game!) It’s the antithesis of whatever shaky point 76 is trying to make about community. I can play it and enjoy myself, but that whiplash is always going to be there.

Nuclear Winter is another atonal note in the off-key symphony that is Fallout 76. What makes it stand out is how well it works right now as a “sneak peek.” Bethesda has not said when the full, finished version of Nuclear Winter will be available, or what will happen to the mode after the sneak peek window comes to a close next week.

It could be gone for a little while, or a long one. It could change a little, or a lot. As is, it’s surprisingly fun, and it’s a fascinating new chapter in Bethesda’s ongoing efforts to rework Fallout 76 in real time. Maybe war never changes, but this game sure does.