Hotel Dusk: Room 215 Is A Compelling Story About Loss And Guilt 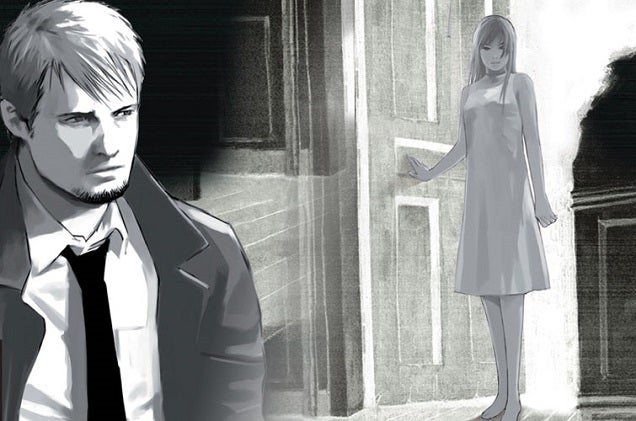 I still have a classic Nintendo DS that even plays the old GBA games, but I only take it out when I go on aeroplanes. Recently having finished Phoenix Wright: Trials and Tribulations, I turned to Hotel Dusk: Room 215, knowing nothing about the game. I quickly became addicted to the mystery interactive novel developed by Cing in 2007, playing it for the majority of a heavily delayed plane trip. Hotel Dusk quickly became one of my favourite DS games with its rich story and intricate characters.

I’ll be diving into a deeper analysis of the story so warning, there are lots of spoilers. 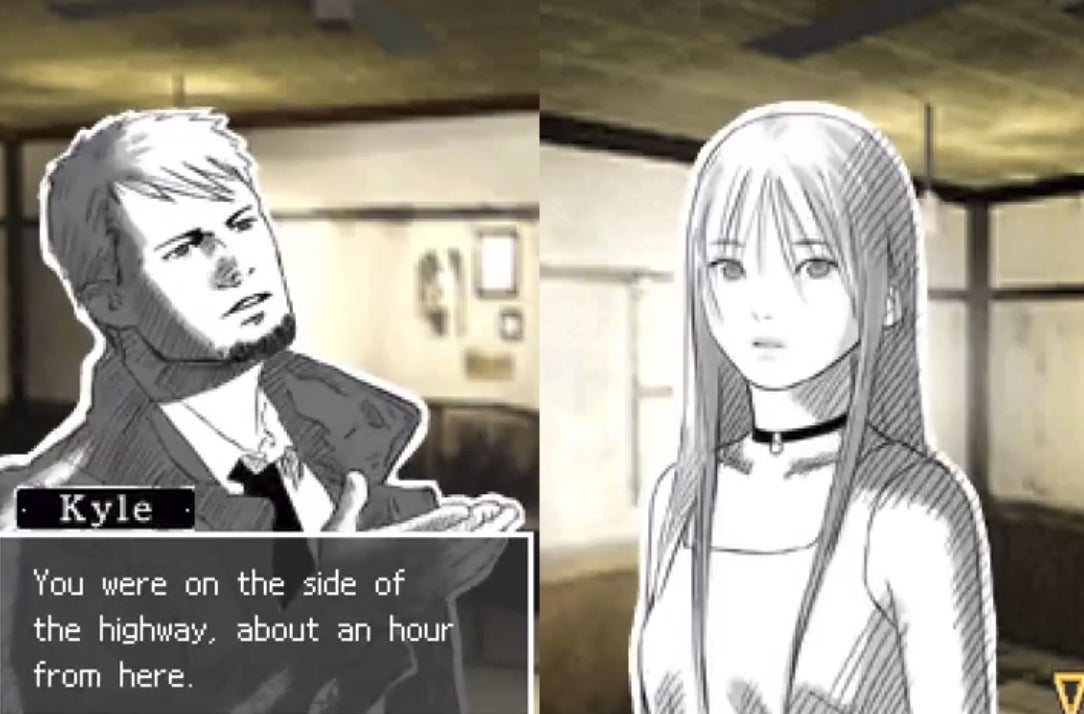 The game reminded me in the best way possible of Twin Peaks if the eponymous town were limited to a hotel, as in this case, Dusk.

Taking place in 1979, each of the characters has a memorable personality and a mysterious connection to main character, Kyle Hyde’s, search for his partner (is the first name of Kyle a nod to Kyle MacLachlan who played FBI agent, Dale Cooper, in Twin Peaks?). Hotel Dusk is broken up into ten chapters and feels like an intricate mystery novel with Dusk looming in the background.

The first thing I noticed when I started the game was that I had to turn the DS to the side to play it. Holding it vertically made me feel like I was experiencing a living book, and the point and click adventure game immediately grabbed me with its bold visual style.

The rotoscoped animation made the characters feel real with their subtle movements, while the sketch-like quality of the characters represented the shady undertones of their muddy pasts. 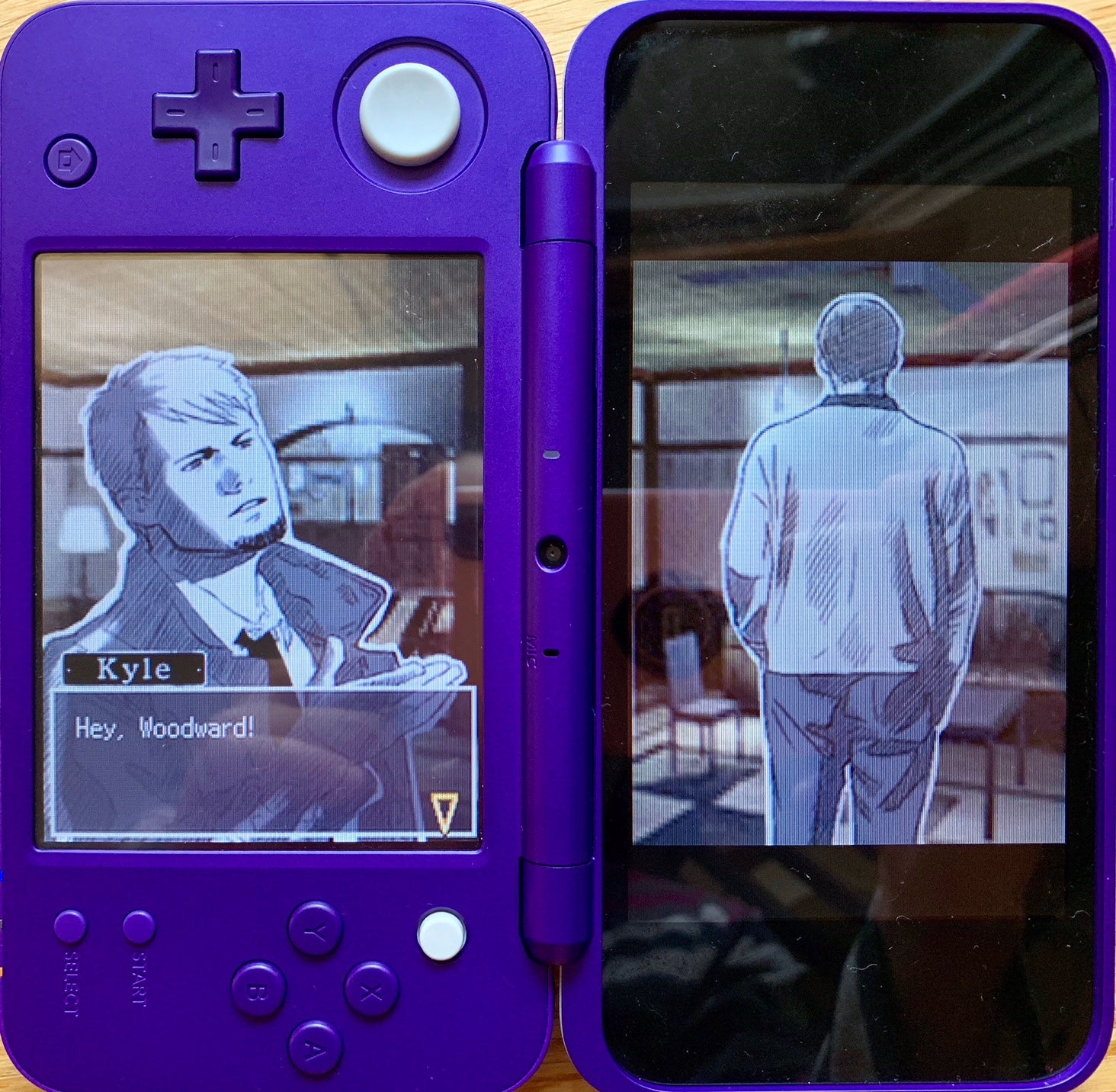 Kyle Hyde is a retired police officer who works as a salesman for a company called Red Crown and believes his old partner, Bradley, is somehow connected to Hotel Dusk.

From the moment you check in, it really feels like you’ve stumbled into a microcosm of America. Hotel Dusk’s emphasis relies primarily on its characters.

Every one of the people you encounter seems like a trope, hoping for something, whether it’s redressing a regret, or finding a lost family member. But as you quickly learn, each of them, from the annoying punk, Jeff Angel, to the mysterious woman, Mila, is not who they appear to be. 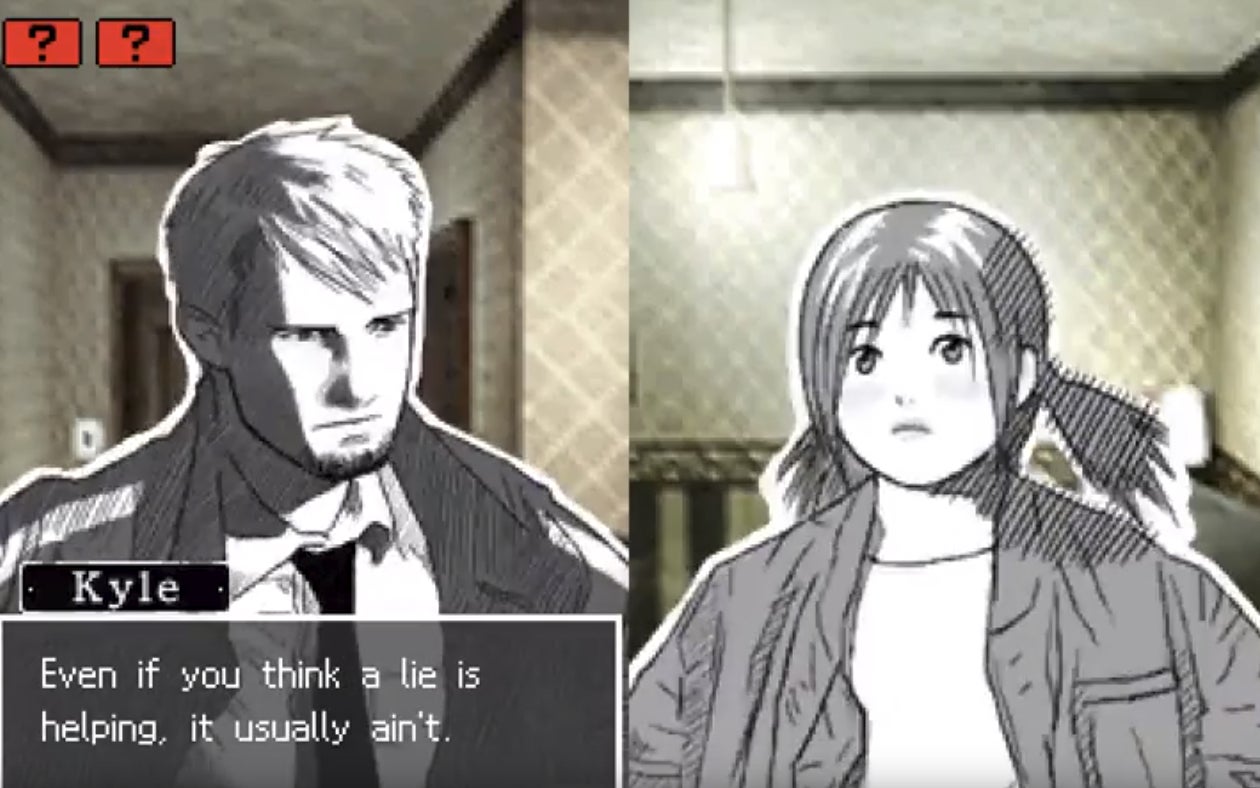 One of the earliest people you meet is a young girl named Melissa who feuds with her father and yells furiously at everyone around her. There’s more to her than her angry facade.

You learn that she’s looking for her mother, who left them recently. Melissa clutches the doll her mother gifted her, filled with remorse from having yelled at her mother the last time they saw each other.

In many adventure games, puzzles are the focus and resolving them opens doors to the next section. While there are some puzzles in Hotel Dusk, the focus is less about solving them and more about their significance to the story.

One I really liked was a jigsaw puzzle involving a cartoon rabbit that Melissa gives you. It wasn’t the actual jigsaw that I liked though, as it was when you finish it and realise there’s a message on the back. The way you access it is to close the DS, then reopen it so that the puzzle is flipped to the other side.

You can read a message from Melissa’s mother to her before she left under mysterious circumstances. Had her mum somehow been forced to leave? If so, why? 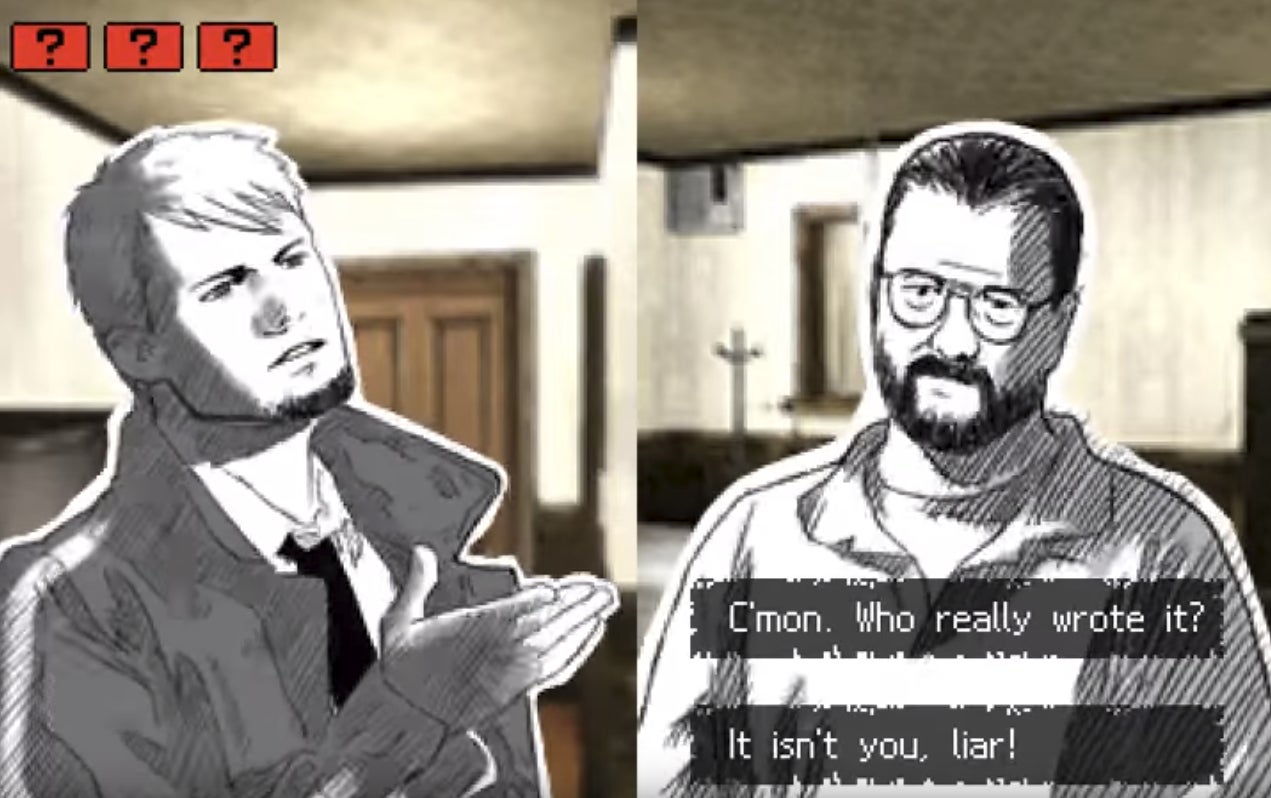 The entirety of Hotel Dusk is a big puzzle; everyone has a secret, and the writing (and localisation) is done so well, I was constantly surprised by the characters and their motivations. There’s the mystery bestselling author, Martin Summer, wanting to uncover the life of a brilliant painter named Osterzone to help inspire his new book.

At least that’s what it seems like on the surface. But you slowly begin to realise that Summer is hiding a dark secret, which is uncovered thanks to a mistaken shipment and comments from other residents of the hotel that while Summers’ first book was brilliant, his following novels were subpar.

The truth he’s hiding is that he actually stole the novel from his friend, Alan, which he then typed up himself and took credit for. Someone else found out and is blackmailing him. This parallels the broader themes in Hotel Dusk about creation and the extent artists will go in order to fulfil their personal voids, as well as their vanity.

But there’s another layer of complexity that you find after you meet an old woman, Helen who has a tragic connection to Summer’s friend, Alan. 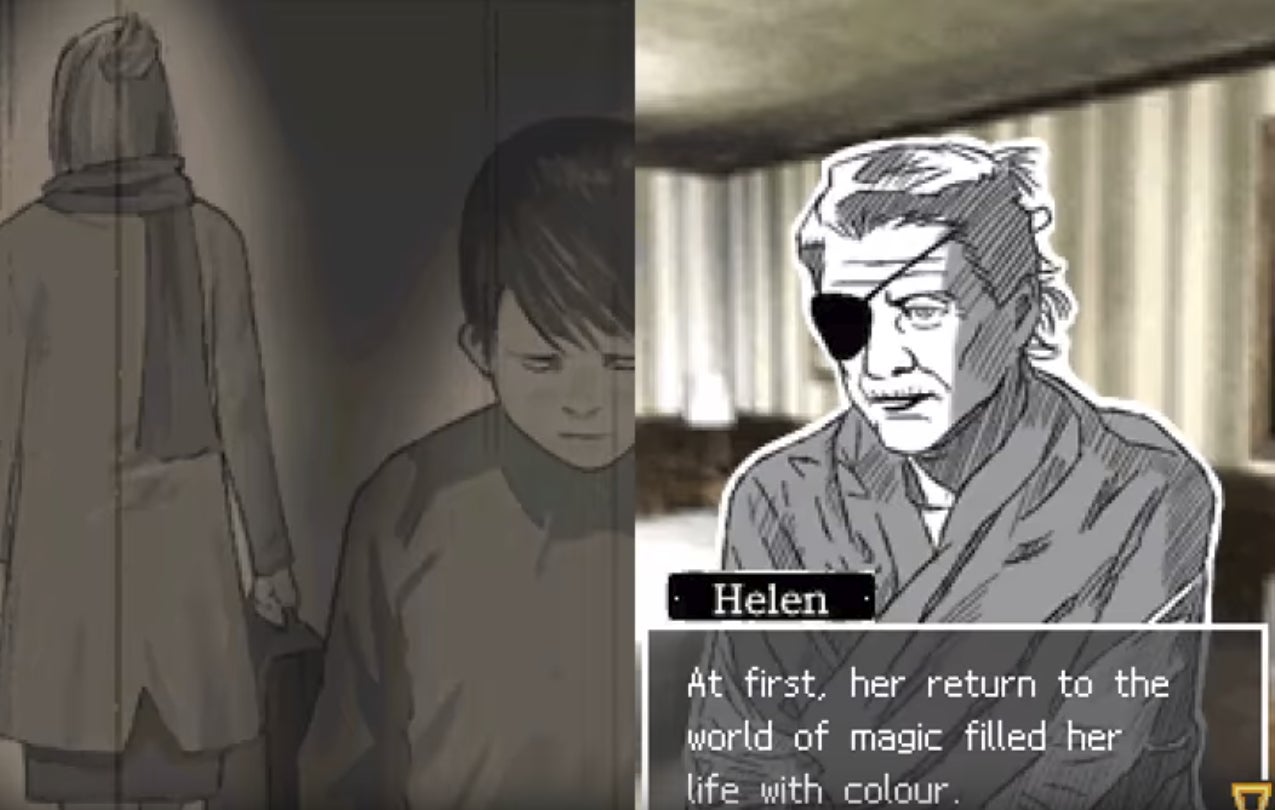 Helen seems like a sweet old lady and asks Kyle to have a drink. As the two become closer, she reveals that she abandoned her son and husband to pursue her career as a magician. But the more famous she became, the emptier she felt.

By coincidence, she met her son again at Hotel Dusk when she was performing there for their opening night twenty years ago. Alan was that son and he forgave her. They promised to meet again there in ten years and when they did, Helen gifted him a special pen to wish him the best in succeeding as a writer.

That’s the pen he used to write the manuscript that Summers would steal. But Helen’s pain and regret is palpable, all while reflecting on Summers’ own sins, both of whom achieved success only to meet with the same sense of dissatisfaction.

I held back tears while stuck in a Southwest plane that was several hours late to my destination. Even as we were asked to deplane for an hour, I couldn’t put the game down. An hour later, when we went back on board, I was still playing.

Hotel Dusk is a world with a schedule and even if the experience is mostly linear, since there’s people coming and going all the time, it makes Dusk feel like a dynamic place. The little details add to the authenticity; I love the fact that the restaurant serves steak and eggs, and that Kyle really seems to relish his dinner, as well as some cake as dessert.

When your friend and bartender, Louis, serves Kyle up some bourbon, it made me want to go out for a drink. “This, my brother? This is an eight-year bourbon from the grasslands of Kentucky,” Louis explains. People stop by the bar for impromptu greetings. You engage in a game of bowling in the hallways. You can buy gifts for other residents at the vending machine as long as you got change in the fourth chapter.

The music, composed by Satoshi Okubo, is superb and changes depending on the state of the dialogue. The jukebox in the bar lets you listen to any of the tracks at any time. It’s like hotel music if hotel music was actually good. The beats are rhythmic and convey the mood perfectly, especially Rainy Night which plays during the questioning scenes.

As I was playing the game, there were times I looked up from the DS at the people around me on the aeroplane. I wondered about their lives, the secrets they held, and where they were in a rush to get to.

What really makes Hotel Dusk poignant is that ultimately, none of the characters find the resolution they’re looking for; Melissa doesn’t find her mum, Helen doesn’t find her son Alan, and Kyle Hyde fails to find his partner.

Kyle helps us understand each of the characters by opening doors into their lives, giving us a peak at their sorrow, their joys, and their possible road to redemption. He is both excavator and witness, putting the pieces together and getting each of the character to come to terms with their private sins. 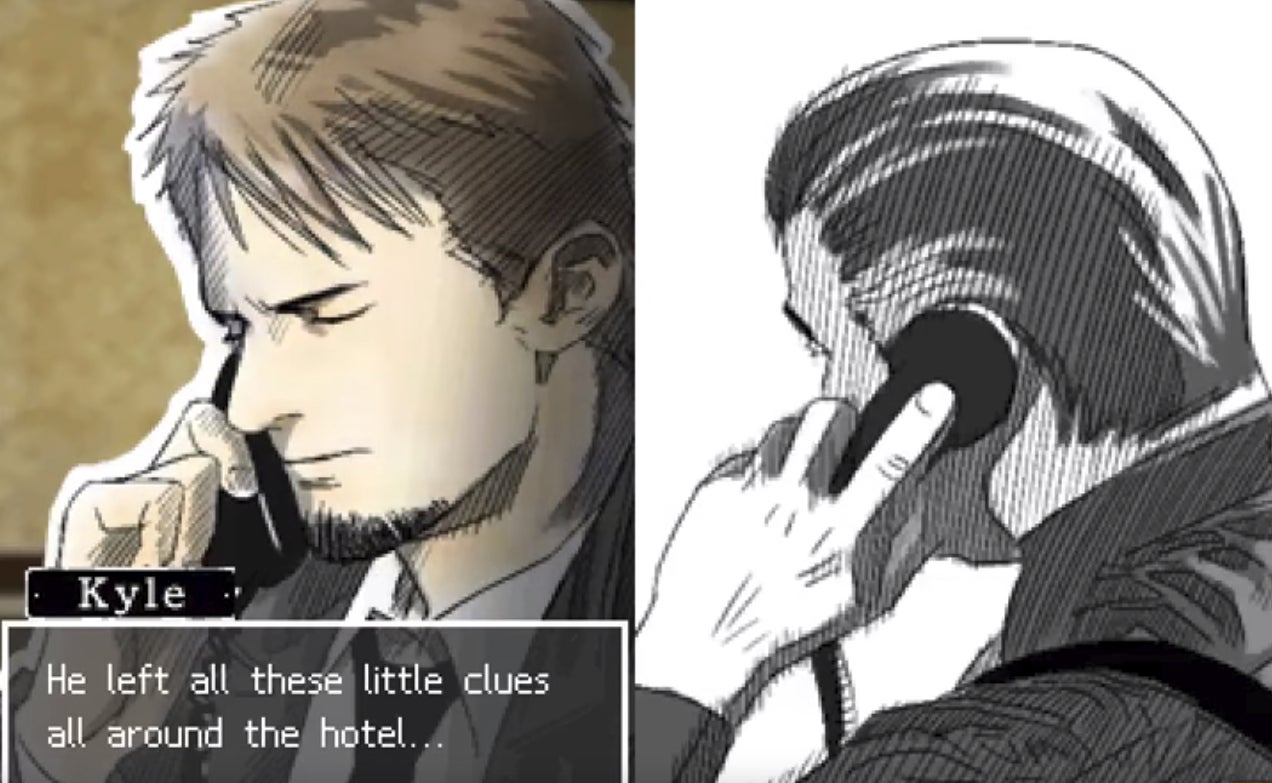 The disappearance of Kyle’s partner is intertwined with a criminal organisation called Nile, an old artist called Osterzone who isn’t who he purportedly is, and an attempt to salvage a marriage destroyed by a malpractice suit.

Family is at the heart of most of the experiences. Art (in the broadest sense of the term) is corrupted by greed, so that it becomes a divisive force, rather than a uniting one. We learn that the hotel owner, Dunning, pretended to be a famous artist, Osterzone, in order for him to gain fame and money.

It worked beyond their wildest imagination. But when he decides he no longer can paint, all hell breaks loose as the Nile organisation wants him to continue so they can earn more money. When he refuses, they kidnap his daughter, setting of a domino effect that would lead to the maelstrom of Hotel Dusk.

Dunning’s ownership of the hotel is as much a prison sentence as it is a wishful longing that he could one day meet with his daughter again.

To anchor all of the chapters are Louis and Kyle. Louis seems like a flaky worker and was actually busted by Kyle while Kyle was in the NYPD. Louis has made amends and does his best to help Kyle every step of the way.

Some of my favourite parts in the game are their light bantering and camaraderie. You feel their friendship and trust grow through the ten chapters. Their rotoscoped animation really shines as Kyle and Louis express themselves like real people with flaws, foibles, and occasional charm.

Honestly, after I finished the game, checkout time was rough for me. Even though it’d only been a few hours, I didn’t want to leave Hotel Dusk. I wanted to stay longer, hang out, and get to know the residents more. But I wasn’t the only one checking out. Everyone else was moving on too.

Kyle Hyde leaves like a modern cowboy riding off into the sunset. I wished I could go along for the ride too. But my flight had finally come to an end. Time to close the DS and head back home.