How Dragon Quest 11 Tells An Entire Story With Haikus

The wind blew you here. Surely it was not by chance. Will you hear my tale?

These are the words spoken by Miko, the leader of the village of Hotto in the role-playing game Dragon Quest 11, which came out last year for PC and PS4.

Like most of the other villagers, Miko speaks almost entirely in haikus, a practice that exemplifies Hotto’s penchant for politeness. There are no explicit lore reasons for the haikus, just an unspoken social code to which the villages adhere.

Haiku, a classic form of Japanese poetry, has origins in the 17th century and follows a strict formula. There are three lines, containing five, seven and five syllables respectively.

“This was a collaborative effort between our duo of haiku masters,” said John Taylor, lead English translator for Dragon Quest 11, in an email to Kotaku. “Mark Boyle, who translated the Hotto scenario, and Oli Chance, who edited it.”

Nearly every person in Hotto speaks in haikus. The main quest line of Dragon Quest 11 takes the player through the town more than once. The first time is in the early hours of the game when the party meets Veronica, a talented and dangerous magician. The second quest that requires a visit to Hotto comes much later, near the end of the game.

Both visits are story-critical events, and what’s fascinating about them is that the quests that take place in this city are handled almost entirely by dialog written in haikus. The late-game quest in particular is an impressive feat of video game writing.

“It was certainly very time consuming,” Taylor said. “The main quests posed a particular challenge, as it was crucial that western players would not only be able to follow all the story developments as easily as Japanese players but that we put across all the emotional and dramatic moments too.”

Hotto serves as the gateway to Mount Huji and the Crucible within, where the hero of Dragon Quest 11 must forge the legendary Sword of Light to vanquish the evil Mordegon and save the world from his dark rule. Before the party can do that, however, Hotto’s leader Miko requires some help.

A monk was sent to pray, yet

A beast blocked his path.

Mount Huji also happens to be the site of a ritual sacred to the Hotto people. With the path to Huji blocked by a dangerous monster, though, the ritual cannot proceed.

And so Miko tasks the party with slaying the beast in her stead. She’s been sidelined by a leg injury, suffered against a great fire dragon named Tatsunaga the Terror. Miko claims that Tatsunaga is no more, but she seems apprehensive. 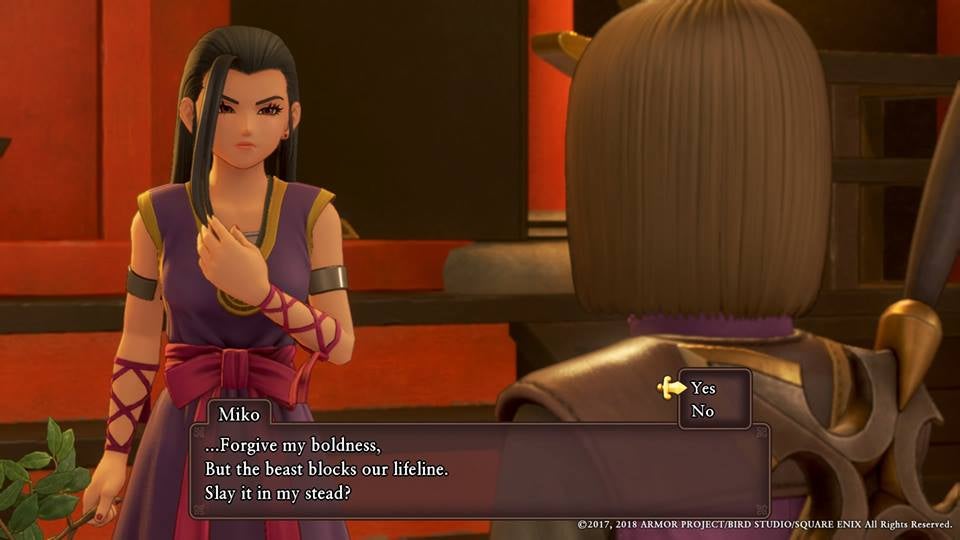 The party makes its way to the base of Mount Huji and comes face to face with the beast that Miko sent us to dispatch, its bulky and threatening silhouette looming. After a short struggle, the truth is revealed: The beast is no beast at all, but two children dressed up to deter travellers.

One of the children, Atsuo, explains their motives. At first, he forgets his place and speaks plainly, but quickly realises his mistake and slips into the haiku formula.

We have done no wrong

Miko’s rite has to be stopped.

“We decided on a rule where children would occasionally forget their manners and slip into plain text, and short exclamations didn’t need to receive the full haiku treatment,” Square’s John Taylor said. 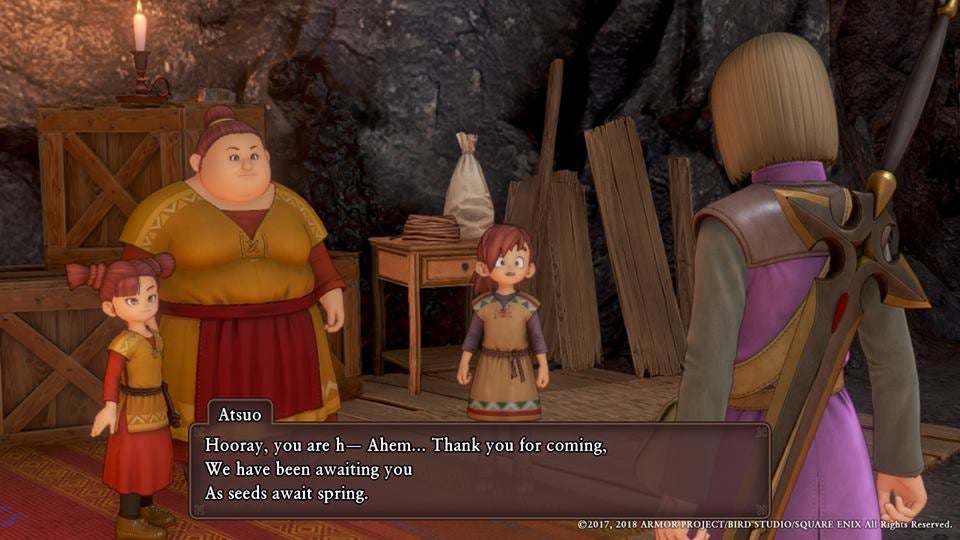 Atsuo and his sister Atsuko are adamant that Miko’s motives behind the Mount Huji rituals are nefarious. At this point it’s noteworthy that Atsuko, the younger of the two, does not speak in haikus, implying that the practice is a learned thing, something that the citizens of Hotto must grow into.

Whatever the case, the party agrees to hear the pair out, and they are escorted to a nearby hideaway.

The rite is sacred,

Or so we have long been taught.

…But this is just wrong!

Atsuo explains that Miko’s ritual is sacrificial, and that she has chosen Atsuo and Atsuko’s mother to be thrown into the fiery depths of Mount Huji.

To appease the gods,

A sacrifice will be made —

Our own dear mother!

Living flame will consume us,

Unwilling to turn a blind eye to human sacrifice, the party agrees to confront Miko and unravel the mystery surrounding her rite. Atsuo says that his mother saw Miko sneaking up Mount Huji. Miko caught her, and very soon after chose that she ought to be the sacrifice to volcano. This is no mere coincidence to Atsuo and Atsuko.

Venturing through a secret passage and into Mount Huji itself, the party soon discovers what Miko has been hiding. The great fire dragon Tatsunaga is not only alive, but it has taken up residence in the volcano.

This is her secret!

She did not beat the dragon —

She left it to live!

That liar! That cheat!

Mother will not die for this!

Miko must be stopped!

Back in Hotto, the party confronts Miko. At first she denies the accusation that Tatsunaga is indeed still alive. Soon, an argument between Miko and Atsuo breaks out.

A beast blocks the way upward!

You could not have passed!

The unholy fiend you feared?

Me and my sister!

We took our mother,

And sought to keep you from her,

With a bold disguise!

Your games will see us all killed

By the mountain’s rage!

Ha! Why believe you?

You whose tales of bold conquest

Were naught but hot air!

This argument, the entire back and forth between Atsuo and Miko, is delivered entirely via haikus. What’s remarkable is that none of the emotion and frustration that a true argument evokes is lost. In fact, it may be amplified. Poetry is a language of emotion, and this argument is absolutely teeming with it. 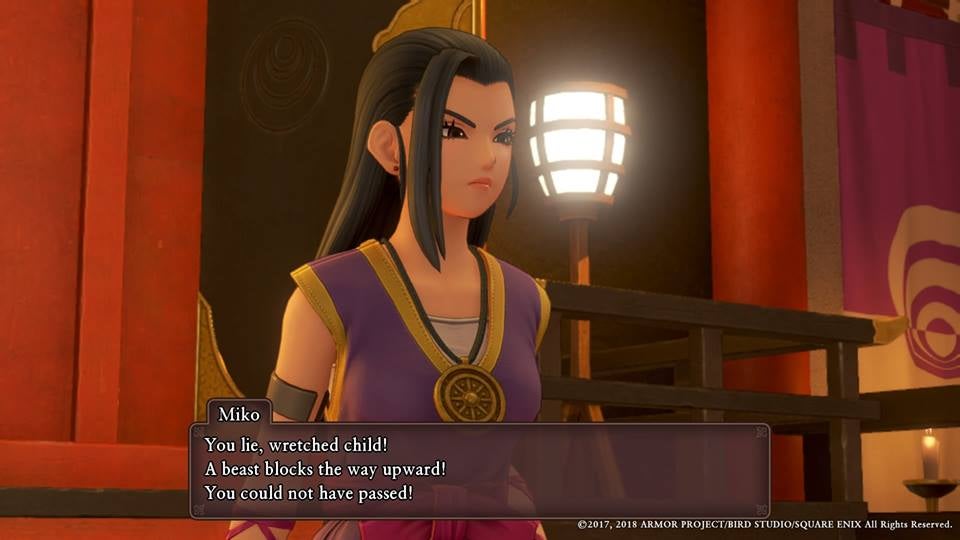 “I really like the scene in the second act of the game when Atsuo confronts Miko in the shrine — it’s a hugely dramatic scene, full of accusations, threats, counter threats and a shocking revelation,” Taylor said.

“Almost every line is written as a haiku, with all the artifice that that necessarily involves, and yet it comes across as a real argument between two real people. That’s exactly what we were aiming for.”

The scene is soon interrupted by the sound of Tatsunaga attacking Hotto. The guards take aim with their crossbows, but Miko steps in before they can fire.

Though this may seem a dragon,

To sate your hunger

I give up my mortal form.

The fox feeds her cub…

With those words, Tatsunaga lunges toward Miko, gulps her down, and retreats back to Mount Huj. The dragon, it turns out, is actually Ryu, Miko’s lost son. Cursed by the real Tatsunaga before he was killed, Ryu was transformed into a fiendish dragon. The entire story is chronicled in Miko’s diary, given to the party by her maid. 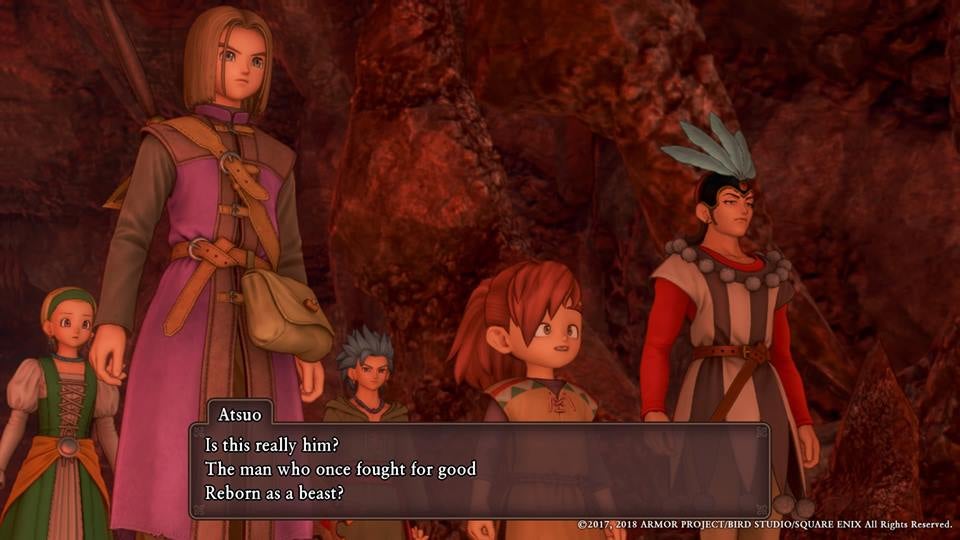 My sins rend my heart,

I must confess them or scream.

Thus, I record them…

-Miko, in her diary

Miko sought to keep Ryu’s new form a secret, so she left him in Mount Huji where no one was likely to find him. The problem was that he was bound to get hungry. So Miko came up with the only solution she could: Human sacrifice. While she lamented the practice in her diary, she also speculated that Ryu’s transformation could be undone.

In which true forms are revealed —

-Miko, in her diary

The rub, though, is that Miko was wearing the magic mirror around her neck when she was eaten by Ryu. Truth in hand, the party steps once more into Mount Huji in order to fight the dragon and retrieve the mirror.

The fight with Ryu is one of the tougher mainline boss fights Dragon Quest 11 has to offer. He often gets two attacks each round, and tends to alternate between single-target attacks and breathing fire on the entire party. Taking down Ryu requires a great deal of foresight and savvy reactions, like it’s designed to be one last skill check before you head off to the final dungeon.

Once you’ve defeated the dragon, the magic mirror inside his stomach activates and he is transformed once again to his human form before passing on from life.

I am free at last…

I shed my shell of torment…

And walk in the sun…

Though great, could not show the truth…

That truth lay within…

With it inside me…

At last, the miasma cleared…

The curse was broken… 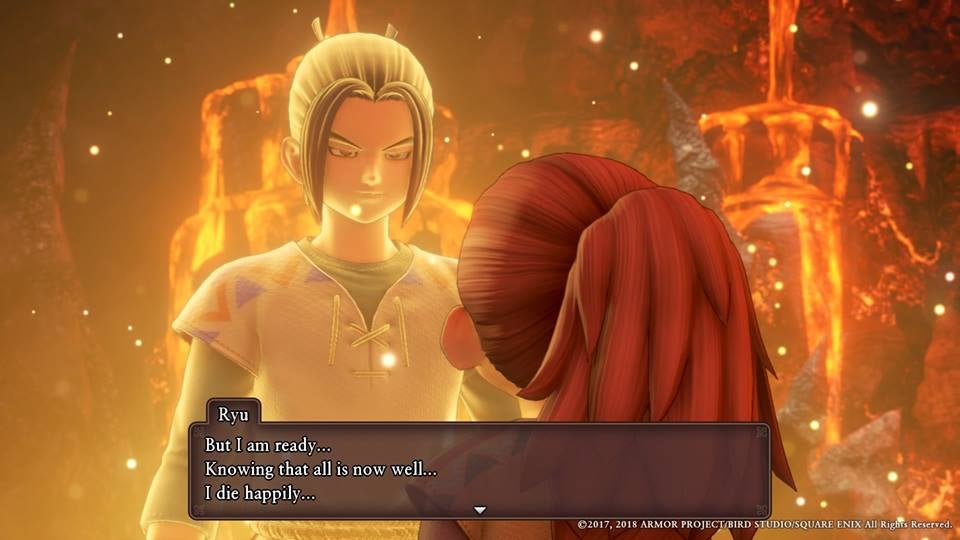 The story of Miko and Ryu is an impressive and sprawling tale, filled with emotion, unexpected twists, fantastic character moments and a surprisingly touching conclusion. That it’s entirely driven by haikus speaks to an impressive level of creativity on the part of Dragon Quest 11’s English localisation team.

For all the challenge this task presented Taylor and his team, he said that they never once considered anything else. “Even with all the extra work it entailed, I don’t think we ever considered abandoning our haiku plan at any point,” he said. “We were confident that we would be able to achieve this even with the constraints we’d set ourselves.”

The Hotto quest stands as one of the best-written stories in an RPG filled with memorable characters and epic quests, and a large part of why is the haikus.