Detective Pikachu is already a pretty weird movie—it’s a noir film for kids starring outlandish creatures, one of which wears an incredibly adorable deerstalker hat.

But it takes an even weirder turn for its climactic third act. A turn that required VFX studio MCP to explore not only the games for inspiration, but one of Marvel’s biggest blockbusters.

After Bill Nighy’s seemingly benevolent benefactor Howard Clifford reveals himself to be not quite as benevolent as we’d been led to believe—by hijacking Mewtwo’s body with his mind and going on a maniacal spree to fuse Ryme City’s citizens with their Pokémon pals—Detective Pikachu sets up a climactic duel between its titular hero and the controlled villain that is unlike any Pokémon battle ever seen.

While Pokémon battles have been portrayed in various mediums before—from the myriad manga to the long-running anime and its various movie spinoffs—in the games themselves, or at least in the mainline titles, Pokémon battle animations have always been a little…let’s say basic.

You might get a little hop and a growl while a damage effect lights up over your opponent. If you’re lucky, you’ll get an energy blast. But the limitations of the hardware on the original Gameboy that necessitated such restraints means fans have spent decades imagining just what iconic Pokémon moves really look like … creating a very specifically daunting challenge for the team behind the fight’s special effects.

“Where we ended up was very calculated,” VFX supervisor Pete Dionne told io9 in a recent phone interview. “Rob Letterman, our director—the first thing he said was, ‘This can’t look like magic, and it can’t look like cartoon-y glows, this needs to look like real, physical events. Like, I want to see electricity and plasma. Things I understand, physically, what they are, but at the same time—I want these to be moments for the audience and fans to not roll their eyes, but get excited and see the respect we’re paying to the Pokémon world.’”

Letterman’s mandate was an already challenging one to consider for Dionne and his team, but then they were thrown another curveball directly from the Pokémon Company itself. “We were informed by the Pokémon Company that for each battle, to limit it to three attack moves, because of the games,” Dionne revealed—even though in most games, Pokémon can learn up to four total.

“So, when we were mapping out what the final battle would be, we worked through it narratively to try and figure out what three powers did we want to have to move the story and the battle forward.”

Eagle-eyed Pokémon fans can already hazard a guess at the moves Pikachu and Mewtwo used in their fight, but Dionne revealed that each kit was pretty iconic for the two characters. “For Pikachu, it was Volt Tackle, Iron Tail, and Electro Ball,” he told us. “Then for Mewtwo it was Psycho Cut, Shadow Ball, and then Barrier. We had their full list of powers we could use, and those were the ones that worked with their give-and-take of battle.”

Once Pikachu and Mewtwo’s move-sets were sorted, the team at MCP could move on to the next challenge: translating pixellated sprites hopping around on Nintendo handheld screens into movement that felt believable in Detective Pikachu’s world. The first port of call, according to Dionne? How they were represented in the Pokémon anime.

“Volt Tackle, for example, we gathered all the references from anime and video games, how it was previously represented—an overall form and overall how it formed around Pikachu,” Dionne said. From there, they could interpret the real-world energy source they could use to inspire the film’s final look. “In the anime, [Pikachu’s Volt Tackle]’s just a glowing silhouette with zig-zag shapes around him that slash infrequently,” Dionne continued.

“So, our interpretation of that was we use Pikachu’s body as if the glow, the powered energy, is coming from deep within—and illuminating his body from within, as the light is transmitting out of it, so his entire form is glowing.”

The team then layered over electricity and plasma effects to truly capture the speed and energy of Pikachu’s charge. “[We ended up] having electricity flowing from him, using the 2D anime structure, but with the physics of lighting within filling the space with super-heated plasma,” Dionne explained, “as if the amount of heat he’s giving off is enough to create a plasma trail behind him. By kind of making up with made-up logic that works within the real world, it opened the door to real-world references of plasma and electricity and body glows we could reference—and recreate this event in a powerful manner that pays respect to the anime.”

Ken Watanabe’s Detective Yoshida and his Snubbull find themselves looking up at Mewtwo in horror. (Image: Warner Bros./Legendary)

But there’s also the reason for Pikachu and Mewtwo’s fight that made another headache for the VFX team—mushing human beings’ sentience into their Pokémon is, when you step back and think about it, kind of a nightmare to have in a movie for kids. “You’re kind of touching on a sensitive topic for the development of that,” Dionne laughed.

“Because, that’s exactly how it went! Narratively … it’s Thanos wiping out half the population, all turning to dust. It represented this narrative that’s represented in so many films in a kind of dark manner,” Dionne noted. “We needed to kind of tell the same story, but not have it too dark for a PG audience.”

And Dionne wasn’t joking when he invoked Marvel’s Mad Titan and his scheme to snap away half of reality in Avengers: Infinity War and its sequel, Endgame—early versions of the effect MCP had to show humans being absorbed into their partner Pokémon were particularly evocative of Avengers’ dust effect.

“The first versions that we developed were very articulated simulations, visually, of the kind of interior form and spirit of humans flowing out of them and into the Pokémon as the human physical form dissolved away,” Dionne revealed. “There’s lots of cool stuff to play with, and it looked cool, but it was also much too visually graphic.”

What MPC ended up doing to keep that idea, but in a manner that was less trauma inducing for kids and adults alike, required a lot of effects-based obfuscation.

“We had all these complex simulations that were of this transfer, but then in our treatment, what we did was really try to add as much lens glow and atmospheric glows around it, just to hide it all within a pool of light,” Dionne said of the final transference effect. “It’s more than just a flash of light—there is, underneath, this sense that there is something happening, it’s just not clearly articulated. We found a way of doing that for the entire transformation.”

Dionne also added that the film’s story actually provided another convenient way to hide the dusty particle effects too—the gas Clifford uses to prepare Pokémon for their uplifting. “It also helped we had the majority of it happening within this purple ‘R’ gas, because we could really illuminate it to obscure a lot of the detail from there.”

“From a technical point of view, transforming from one form to the next, the next, the next, rapidly—also having to do it in layers to try and form whether its the flesh or fur of each character transitioning through this more slimy textural, purple Ditto form is really challenging,” Dionne said of the design, which once again came back to the mandate MPC received from the Pokémon Company: Pokémon are always cute.

“Fundamentally wanting every Pokemon to be cute and adorable at all times—how do you translate that?” Dionne questioned. “We were very careful with trying to design this effect—not only design this effect in a way where it told the story narratively, and looked cool and complex, but it never looked really grotesque.” 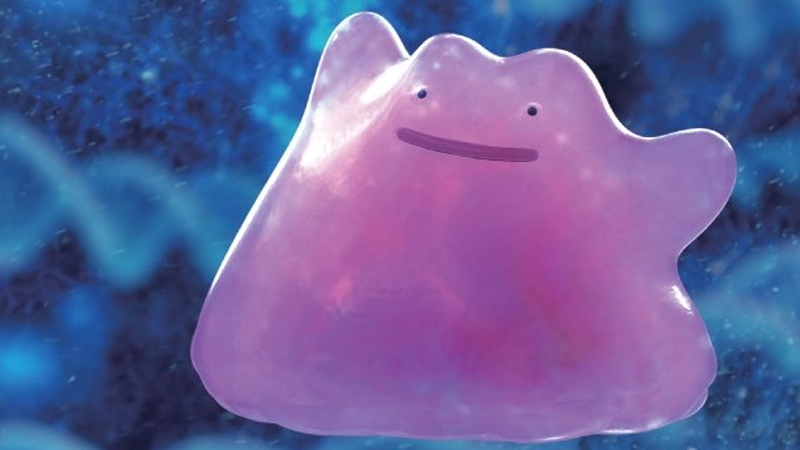 merchandise opportunities, but when Detective Pikachu’s Ditto needed to copy a human, things got horrific all over again.

According to Dionne, early iterations MPC went through were pretty nightmare-inducing. “We explored all sorts of variations of having the eyeballs stay the same size, but just turn black,” Dionne said. “We tried versions where the eyelids would suck in and just become these little nipple-like black spots. We tried so many ways to use human eye anatomy to transform into a Ditto eye. But they all looked straight out of a horror movie!”

Thankfully, Detective Pikachu’s director Rob Letterman came to the rescue. “Rob was the one who was like, ‘cover the eye cavity with skin, pop a little black button on it—and don’t ask any questions’,” Dionne continued. “It seemed way too simple compared to what we were prepared to do, but we tried it and went, ‘Oh, that looks adorable.’ So we ran with it.”

Still a little creepy, for sure. But better than the visual horrors the phrase “eyelids would suck in” conjures any day of the week.