John Wick Hex Is A Portal Into John Wick’s Mind 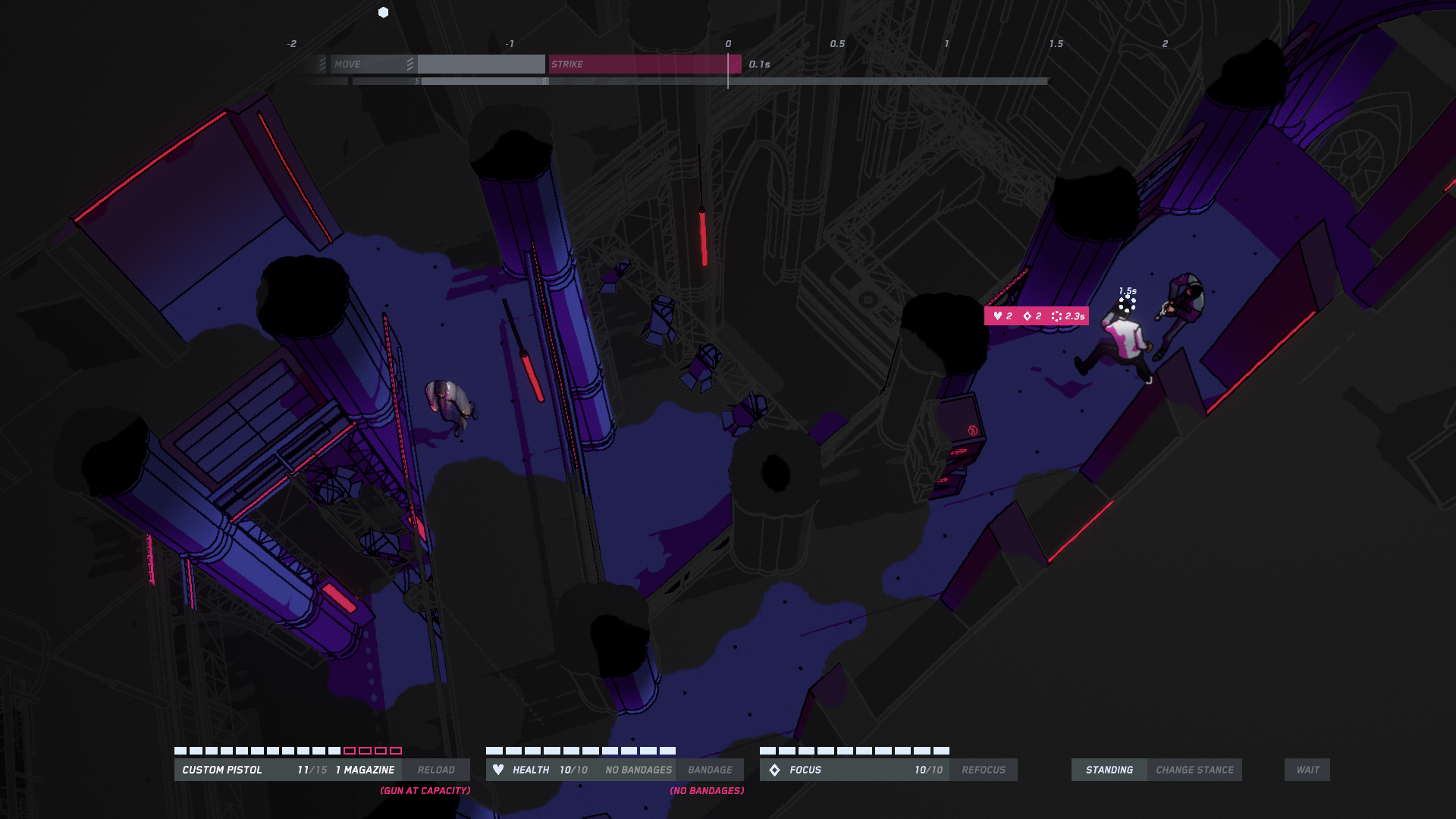 At a Keanu Reeves-filled E3 last week, I played a demo of John Wick Hex, a forthcoming action game directed and written by creator of acclaimed indie games Thomas Was Alone and Volume Mike Bithell.

Playing John Wick Hex was like being transported inside of the titular assassin’s mind via a mashup of the best things about Transistor’s combat and Superhot’s time mechanics.

On the top of the screen is a timeline that shows how long not only your actions take, but the actions of the enemies you can see. As soon as you lock in an action, time moves forward. If two guards are moving toward you, you can mouse over the option to dodge out of the way and see if it’ll take less time to reposition than it will take for them to get to you.

You’ll also have to manage your focus meter, which helps calculate how well you aim when firing a gun, and your ammo. John Wick Hex hews more closely to real-life rules of guns and ammo than other games. If you reload your gun, not only does it take time, but you’ll be expelling valuable ammo if the chamber isn’t completely empty.

Bithell said that this was because of the logic of the source movies. Bithell has been working closely with John Wick trilogy director Chad Stahelski in order to get the tone right. Part of that was understanding the underpinnings of the combat in the films.

Although they take place in a fantastical world, the combat has rules, like a video game would. Wick isn’t impervious to damage — he deals with its effects later. He isn’t superhuman — he just knows exactly the right move to make when surrounded.

Guns hurt and kill people, usually in a limited number of shots, but more importantly, weapons can be spontaneous and improvised, as long as they have the intended effect of murking some dudes. 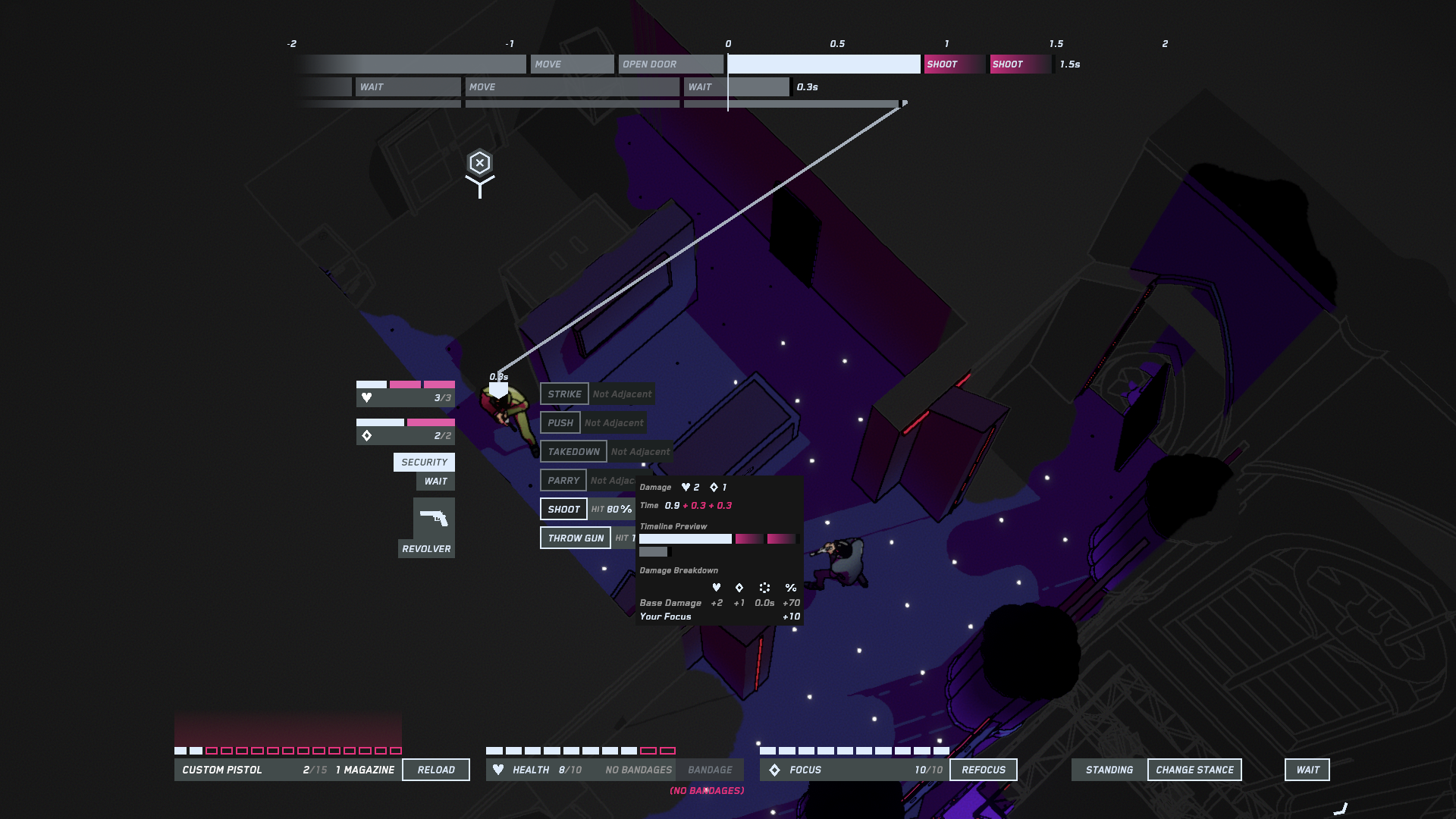 We were talking in what can only be described as a John Wick-arse room, complete with dim lighting from exposed bulbs, high-backed leather chairs, and waiters occasionally coming through with appetisers.

Bithell told me that he had often forgotten to eat between interviews and demos at E3 this year, so the waiter tended to dote on him. Later during the interview, she came through again and thrust three or four pieces of bruschetta onto his napkin.

“I want you to have fun with that logic.”

Essentially, John Wick Hex is a John Wick Action Setpiece Simulator. It gives you an alleyway or a spiral staircase, a gun and a couple of guys, and it asks you to imagine how Keanu Reeves would gun-kata his way out of it.

Your actions take only a fraction of a second, but with the help of the timeline, you’re able to make complex calculations about your odds. It’s implied that this is John Wick’s thought process.

How the game works is clearest when you fail. In one level, I was able to sneak up behind a guy and disarm him using the takedown move, which knocks someone out while moving John into a different position. Bithell noted that John Wick doesn’t really stay still for long in the movies, so even his silent takedowns move him around the map.

I decided to roll forward while taking the guard out — right into the view of two more guards who had been on an obscured part of the map. I had my back turned to them now, so I was particularly vulnerable, and using a takedown had already used up some of my focus. I tried to crouch and then roll into cover, but the guards were able to shoot and kill me.

The next time, I was able to anticipate the second set of guards with the same kind of supernatural spatial awareness that John Wick has in the films. I used the available cover more strategically, slipping in and out of the guards’ vision so I could take them on one at a time.

I even got to use the gun-throwing move I’d wanted to try out — it stuns enemies, giving you more time to reposition yourself, reload or refocus. I managed to take out all three guards with no damage, and I would have gotten out of the entire level scot-free if it hadn’t been for one last guard near the end. Bithell said that while he and his team are “quite clever”, the success of John Wick Hex is in part because of its source material.

“It’s actually largely because the thing we based the thing on is built in that way,” Bithell said. Bithell also got some time with the stunt coordinators for John Wick, giving him first-hand experience in the physical aspect of action movies.

“The great thing about stunt artists is that the victim leads in stunt choreography,” Bithell said. “So because I’m the novice idiot, when I do stuff with the stunt team, usually it’s them pretending I’m beating them up.”

“It ruins action cinema,” he continued. “We trained with the six best stunt martial artists in America. It ruins every American action movie. Cause you see like, ‘Oh, that’s Bob. Oh, that’s Bob in a beard.’”

I wonder, whenever John Wick Hex comes out, if it’ll ruin John Wick movies for me as well. Hopefully, I’ll just end up with a great appreciation for the mountains of information that man apparently stores in his head. I’ll keep it in mind if I’m ever cornered in an alley.