Mario Maker 2 Online Multiplayer Is Laggy, Too Basic And A Ton Of Fun

Super Mario Maker 2 is the first Mario game to include online multiplayer, and it’s exactly what you’d expect from Nintendo: The tech kinda sucks, the implementation is extremely bare-bones and, despite all of that, it’s a lot of fun.

You can access the various multiplayer options by going into Course World, the online portion of Mario Maker. There, you can choose to play online cooperatively or competitively, or link up to four Switches locally to play these modes with friends in the same room as you.

If you want to hold hands and sing Kumbaya with your fellow Mario makers and play levels cooperatively, that is certainly an option available to you, you ray of sunshine. Just pick “Multiplayer Co-Op” and you’ll be immediately teamed up with three other randoms.

You’ll be asked to vote on what difficulty of level you want to play (Easy, Normal, Expert or Super Expert), and then you’ll be thrown into a random user-created level with said randoms. 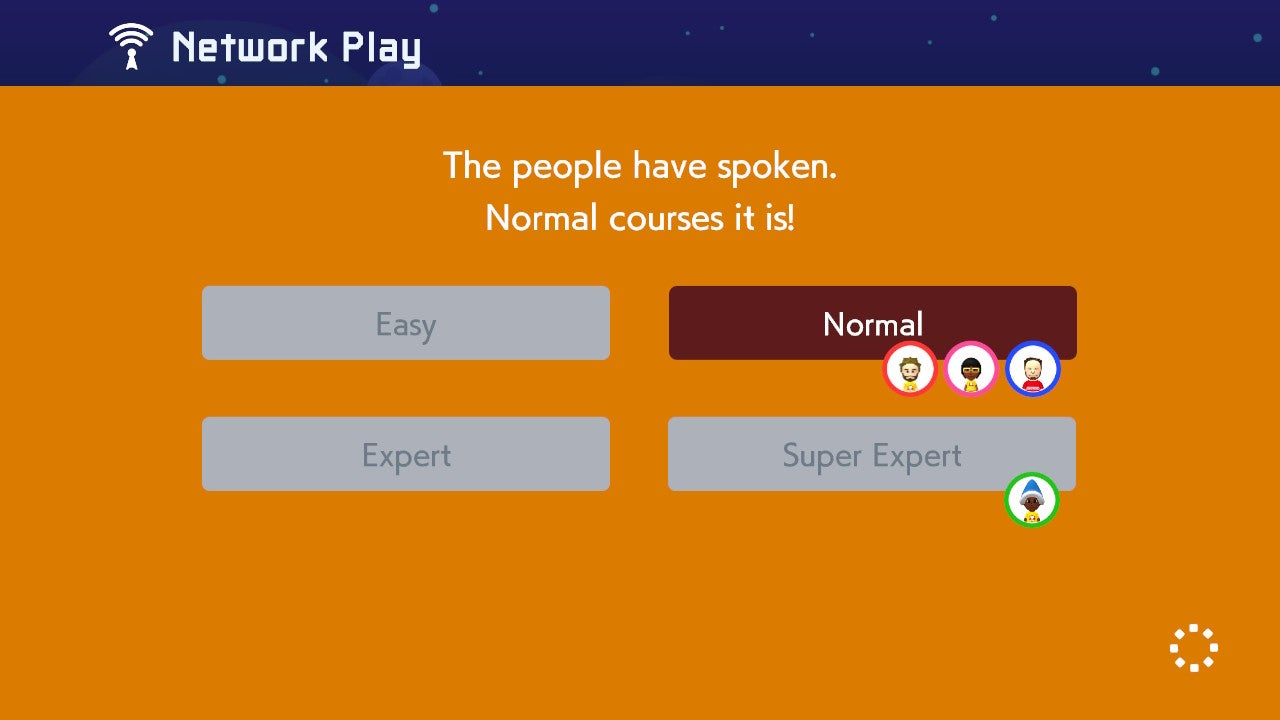 The level proceeds just like a standard game of multiplayer Mario, except if you die, you don’t enter a bubble as you would in a local multiplayer game. Instead, you can choose where to respawn, either at the beginning, the checkpoint flag (if you hit it), or next to other players.

As long as one person touches the goal, you all win! Congratulations! You can choose to play another level or quit.

But really, you know you want to test out those Mario skills you’ve been building up since 1985 against the rest of the world, right? In that case, you’ll jump into Multiplayer Versus. This is more built out than Co-Op, but only slightly. 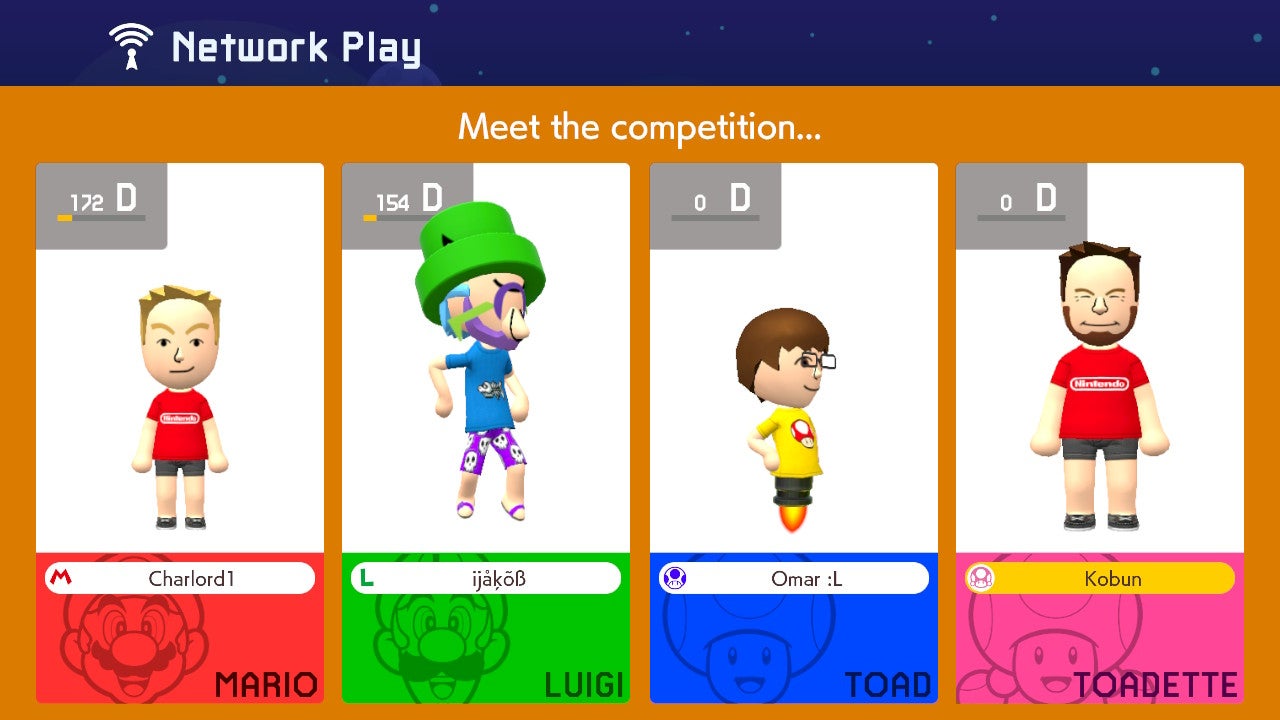 You’ll first notice that you are currently ranked D. You’ll be paired up with three other low-ranked players. When the match begins, everybody will be in a tiny dotted-line prison as a timer counts down to the start of the level.

Even at this point, you can jockey for position — since you’re going to be racing to the goal, it’s probably more advantageous to be in the upper-right corner of the box when things start, for a big leap off an opponent’s head.

Let me take a moment to talk about lag. Sometimes, I started up levels and they played just fine. Sometimes, there would be a little bit of lag. Sometimes they would be total crapshoots. You can tell if a match is going to be laggy right from the beginning, when you’re still in the box, because it’ll be like a cage full of sloths.

Once the rope drops, it’s every man and Toad for themselves. You have one objective: Touch the goal first. If you do, you win, and you get points that raise your rank. If you do not, you lose, and (a very small amount of) points are taken off of your cumulative total. If the course has a “clear condition”, such as “get all 100 coins before touching the post,” you have to do that, too.

Since it’s using user-created levels, there’s an element of chaos that makes each match truly anyone’s game. Players who run forward like rockets might end up in a trap which a slower player who grabbed a power-up can sail right through.

Players who find keys can go through doors first, getting a slight advantage. But other players can attack them to steal the key. So any time keys and doors get involved, the matches turn from races into brawls. 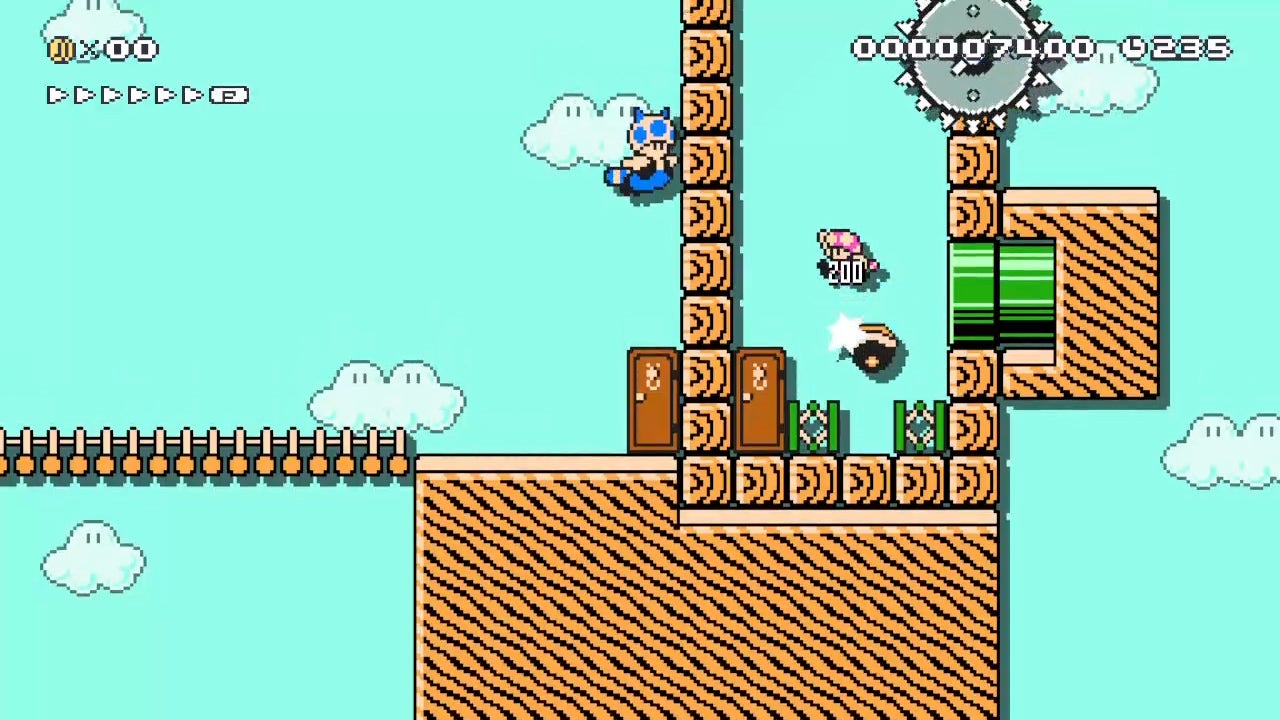 The annoying part is that the only way to get any points is to be the first person to touch the goal post. There are many levels where everyone just ends up smushed together at the end, and the only person who has a positive outcome is whoever happens to come out of that mosh pit closest to the flag.

Nintendo could have done a great deal more with this. What if there was a mode where the goal was to get a high score, and touching the flag counted for many, but not all, of the possible points? What if you got slightly less points for touching the flag a millisecond after the first person?

Heck, last time I checked, this is Super Mario Maker; why not let players design multiplayer rules, too? 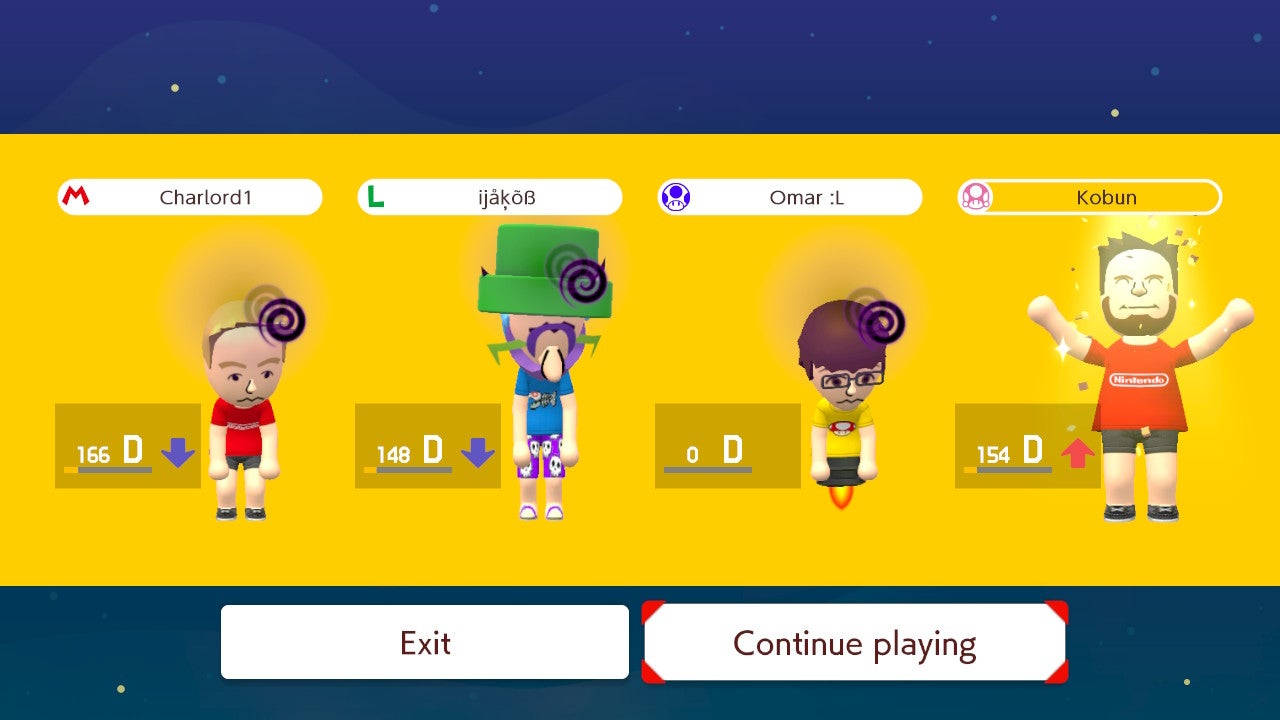 What Mario Maker 2 multiplayer really has going for it is the sheer low-impact nature of it all: You don’t need to commit to playing a lengthy versus session with a group; you can simply jump in, play a match, and be done in minutes. Even when you lose, another victory might be right around the corner.

But what would make it even more addictive is if you gained something even if you aren’t the first one on the flagpole.