A new era has begun for the world’s most morphinominal heroes. Not just because the series has a new creative team in Shattered Grid’s Ryan Parrott and Daniele Di Nicuolo, but because after some time away, the original Power Rangers are back. And things have changed in some huge ways, both expected and unexpected for die-hard fans.

Mighty Morphin’ Power Rangers #40 informally kicks off the next big event for Boom Studios’ series, Necessary Evil. And while it doesn’t pick up immediately where we last left Tommy, Jason, Kimberly, Billy, Zack, and Trini at the climax of Shattered Grid, it begins to explore the aftermath through a very intriguing lens.

Time has moved beyond the series’ original premise of being set in the months shortly after Tommy Oliver joined the team as the Green Ranger. Now, it’s the early days of a second wave of changeups to the team. 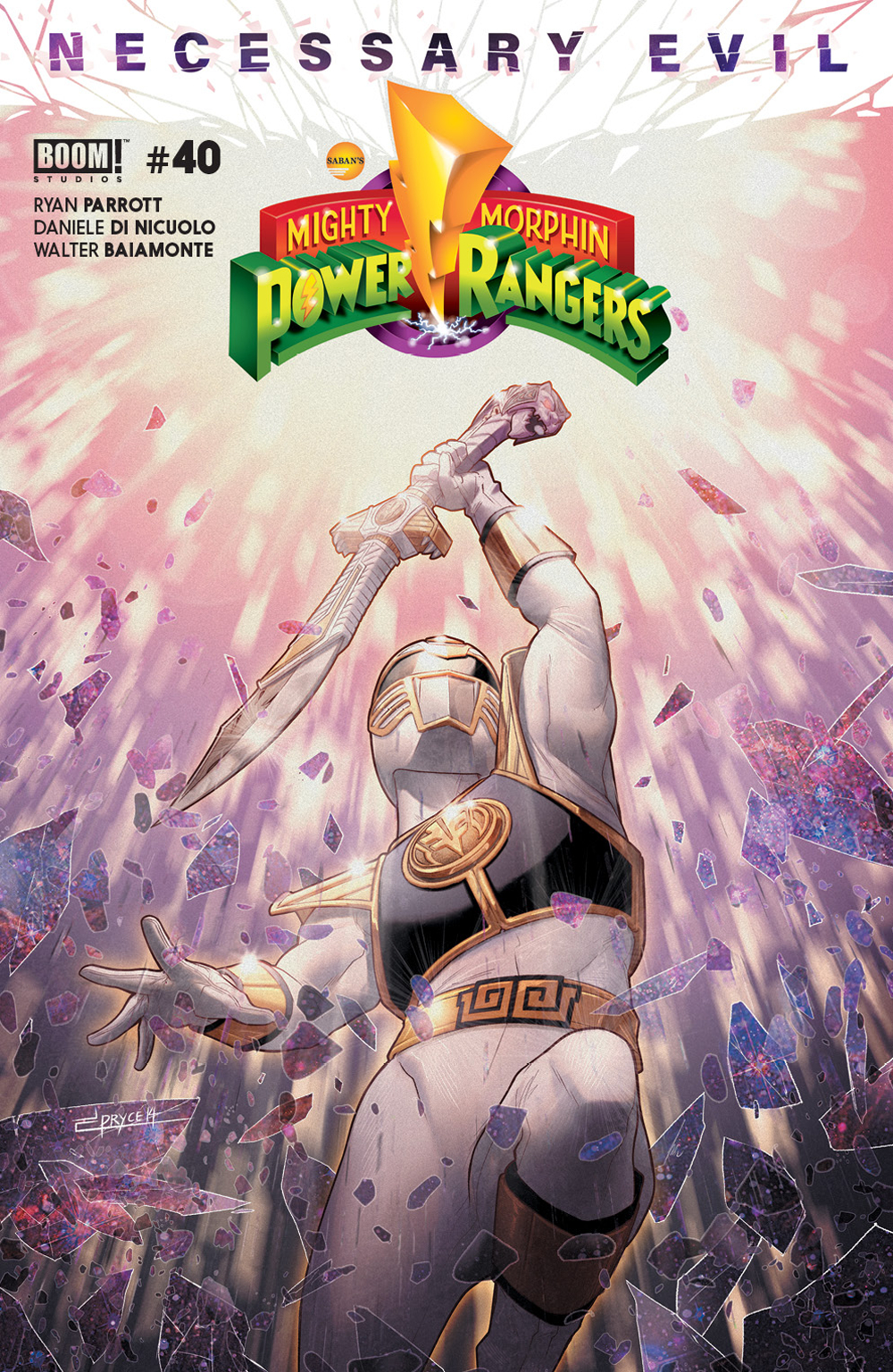 it had run out of (even asking Super Sentai owners Toei to film brand new footage specifically for the show), Tommy was transformed into the White Ranger – the extra Ranger from an entirely different Sentai series, Dairanger, which was never adapted into Power Rangers proper.

Behind the scenes, contract disputes and poor working conditions for the young actors that now suddenly found themselves the faces of a global phenomenon led to the departure of Austin St. John, Thuy Trang, and Walter Jones, necessitating new Red, Yellow, and Black Rangers in the form of Rocky DeSantos (Steve Cardenas), Aisha Campbell (Karan Ashley), and Adam Park (Johnny Yong Bosch).

MMPR #40 sets itself firmly in the midst of those transitory times, setting the stage for new trials and tribulations for both the Rangers and their foes (who are also in the process of some mix-ups, with Lord Zedd taking over after banishing Rita Repulsa). But like this series at its very best, it sets the stage for some big new twists to what fans know.

To break down how all these new changes will bring a fresh dynamic to the book, and tease what’s to come from that huge twist in the final pages of the issue, we got on the phone with writer Ryan Parrott. Seriously, if you’ve not read MMPR #40 yet, turn back now!

Gizmodo: The series is taking this big step forward in the timeline of the original show. What do you think is going to start changing, tonally, for the comic going forward?

Ryan Parrott: That’s a good question. I think, for me, it’s sort of finding a sound storytelling balance. The hardest thing about writing a comic book is making sure you give everybody equal time. Everybody has a favourite character, everybody has elements they want to see in the series.

Tonally, I got to speed up the storytelling a bit more than in Go Go [Power Rangers, the spinoff series Parrott has helmed with Dan Mora since 2017]. Because Go Go was pretty slow—it was like, “let’s have lunch,” and there’s a page of lunch. But, like, you don’t have that luxury here while hopefully keeping and finding time for the character beats.

That’s what I, as a fan of Power Rangers, love so much: looking at what being a Power Ranger is under a modern lens. That balance is the hardest thing, for me. Balancing action and character in a way where it doesn’t feel like nothing’s happening. 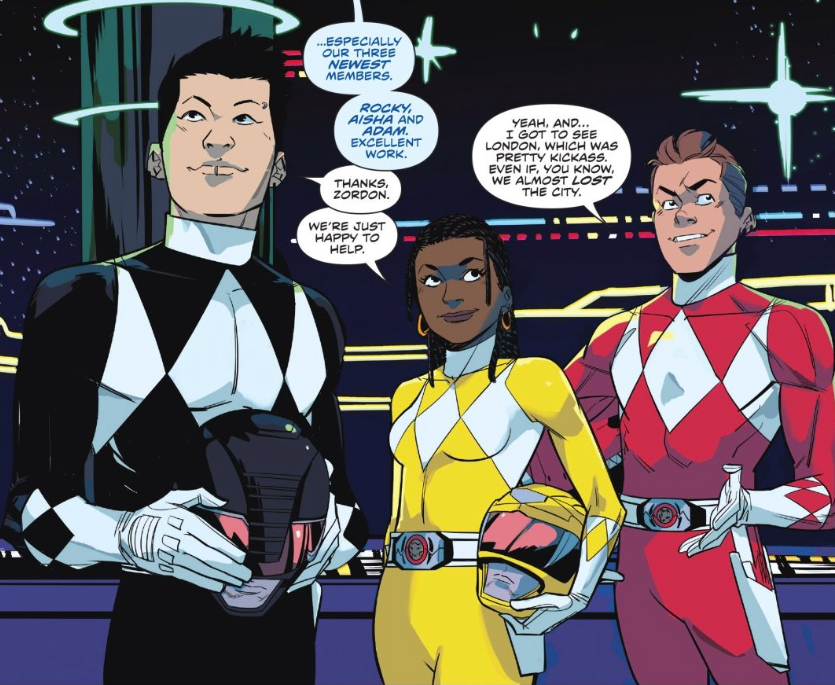 Gizmodo: In terms of plenty of things happening, we’ve now got Aisha, Adam, and Rocky joining the team and going through a few growing pains as they adapt into the Power Rangers fold. What can you tell us about the dynamic they bring to the book?

Parrott: You know, the original Rangers all became Rangers at the same time, barring Tommy. But they got their powers at the same time, they went through all the same experiences, they’d learn and they’d grow – that’s what Go Go grappled [with]—growing from fledgling Rangers to, you know, seasoned Rangers.

What was so cool about bringing the Stone Canyon Trio in is that you’ve got these Rangers, who for the first time have to deal with a legacy that they aren’t involved with. In the first issue, you see them using catch phrases and commands that are shorthand—that they already have.

In the TV series, they were pretty seamless. They sort of stepped right in and they worked ostensibly, but I feel like, what was fun about bringing them in now was it wasn’t really as seamless as that. You’ve got the Old Guard and the New Guard. And you’ve got a brand-new leader like Tommy stepping in, to balance those two sides and points of view.

That was one of the most fun things I found while writing the series—looking at the divide and seeing, “How did they eventually come together? How did they coalesce into a team again?” And so, just also as a writer, I’ve written the original five for so long, bringing in Aisha and Adam and Rocky, I’m finding their voices the same way they’re finding their place on the team. And that’s been really exciting. 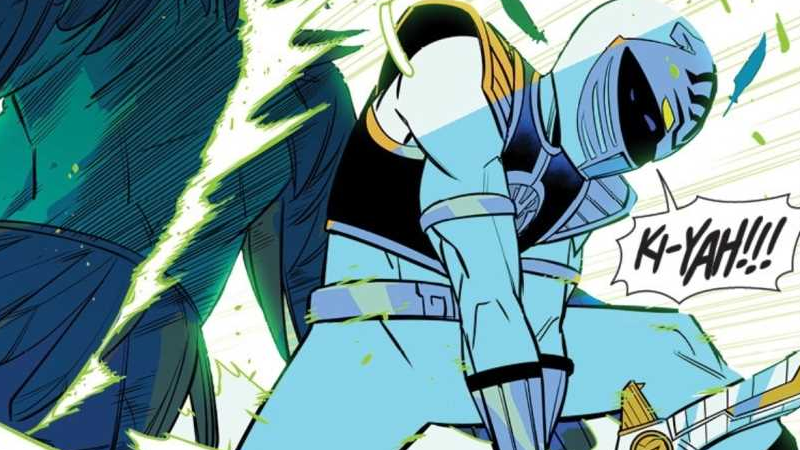 Gizmodo: Another change on the Ranger side is, of course, Tommy is now the White Ranger — he’s got this whole new power set. One of the most fascinating things I’d found reading the issue as a fan was the way you play with a potential that the show only barely touched on before, of Tommy coming to terms with the way his new power set is physically changing his body. How much of that storyline can fans expect to see Tommy going through, going forward?

Parrott: I think that was one of the fun things when we first started talking about the series. In Go Go, we dealt a lot with the nature of the Green Power Coin—how it worked and what it did, and how it would charge up and stuff.

And so, when we talking about the White Light, that’s a whole other source of energy. A whole other entity. It was just like, “Wouldn’t it be interesting if it came to him in a different way?” It’s so powerful and strong, what would it mean to him? Can we find ways to manifest that shift in a personal way?

We dealt a bit in Go Go with the idea that the colours and coins change your personality—or rather influence your personality—and so obviously it just seems like it would influence him in interesting ways. That’s what’s fun about doing long-form comics, you can actually take a little bit of time to do that.

Gizmodo: On the villain side of things, we’ve got Lord Zedd formally established up on the moon and Rita banished. After the predictability of Rita’s schtick—she raises the wand, the monster grows, the monster’s beaten, she does it all over again—what energy does he bring to the villains now, and what does Zedd’s presence in that area bring to you, as a writer?

Parrott: Well, I think with Rita I was originally excited about digging into the…like you said, she has a very predictable attack. And so I thought, well, there’s got to be a reason behind the madness, which was the important thing for Rita.

With Zedd, though, I think what was different for me was trying to find a way to differentiate him. He’s a rival of hers in the series, and he’s terrifying. He is a force to be reckoned with. So I was like, “how do we make him a threat, how do we make him somebody who doesn’t use the same tactics all the time?” Let’s find a way to really make him up the game, to make his approach and his attacks smart and aggressive.

And hopefully find a way to differentiate him in both the same way he treats the Rangers and his own minions, sort of flesh him out as a character. That was the fun part for me—he’s such a visually stunning character, now we have to try and find a way to make him as rich, personally. 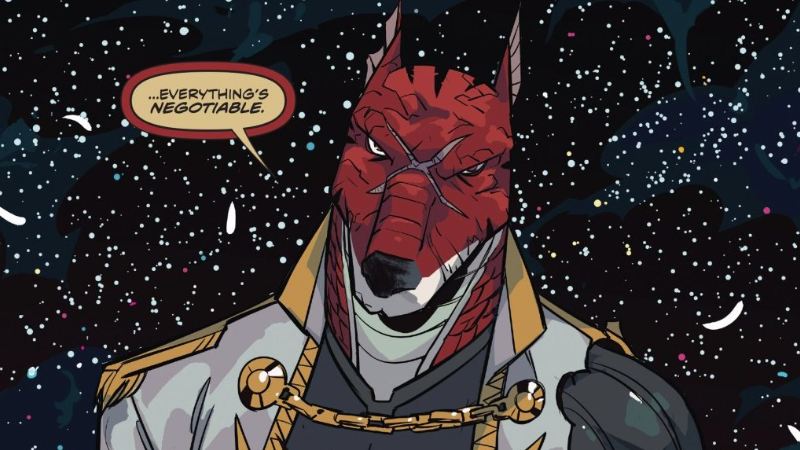 Gizmodo: Up on the moon we’re also introduced to Dane, who has that cool SPD connection that he is another Sirian, like “Doggie” Cruger was. Can fans expect to see more connections like that, or is it just the case you’ve got this new character in Dane and there was the opportunity to make that connection, anyway?

Parrott: Well, I think Shattered Grid opened up the door for more of that. It sort of slowly opened the comic book up to every Power Ranger team, shined a light on corners of the universe. “Hey, we’re all here—now we’re all part of the story!” We should feel free to use the universe. And it’s a real universe, so, there are more than one alien per race!

We were looking for an opportunity to bring in a new villain, somebody who would change the game. And Dane, the visuals—I always loved “Doggie” Cruger as a visual. The idea of bringing in somebody else like that who’s a little different, with the scars and the rags, I loved all that.

I think wherever we can find ways to make those connections and tie them into the [Mighty Morphin’] ranger team, while at the same time addressing the mythology, it makes the world feel more unified and realistic. I’m always looking for stuff. There’s probably a few more things peppered in there as you read that definitely connects to the other Ranger series, in both Mighty Morphin’ and Go Go. We tried to make it all feel like one big world. 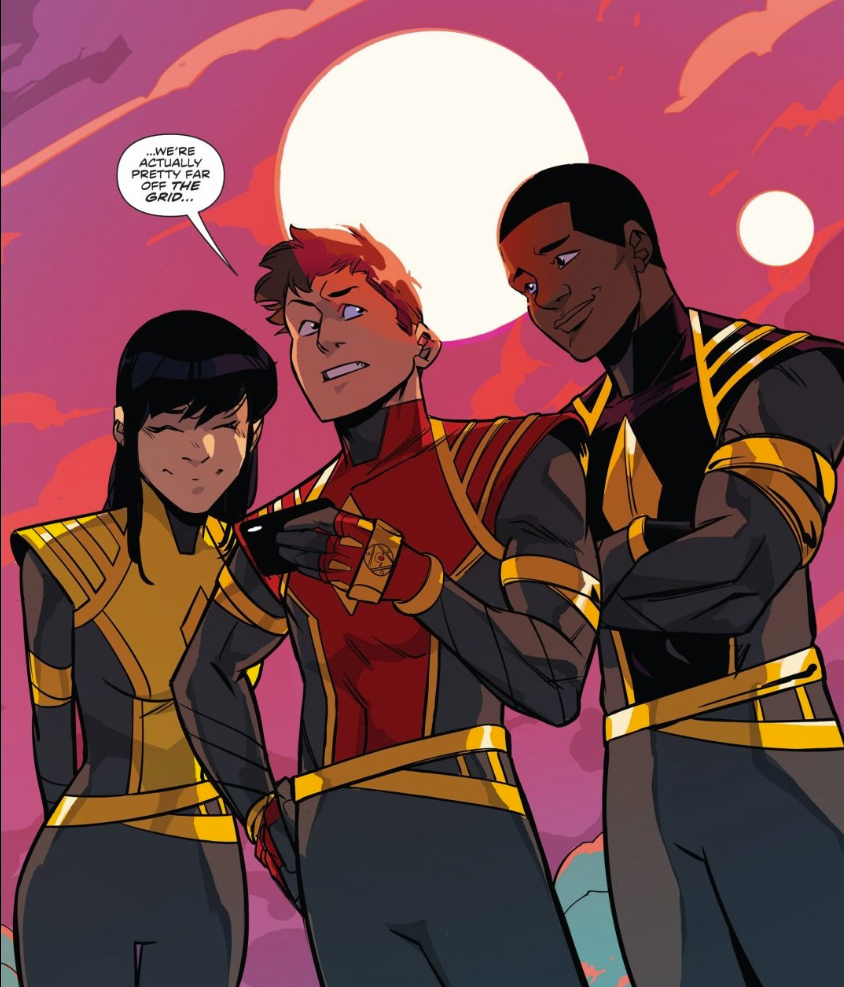