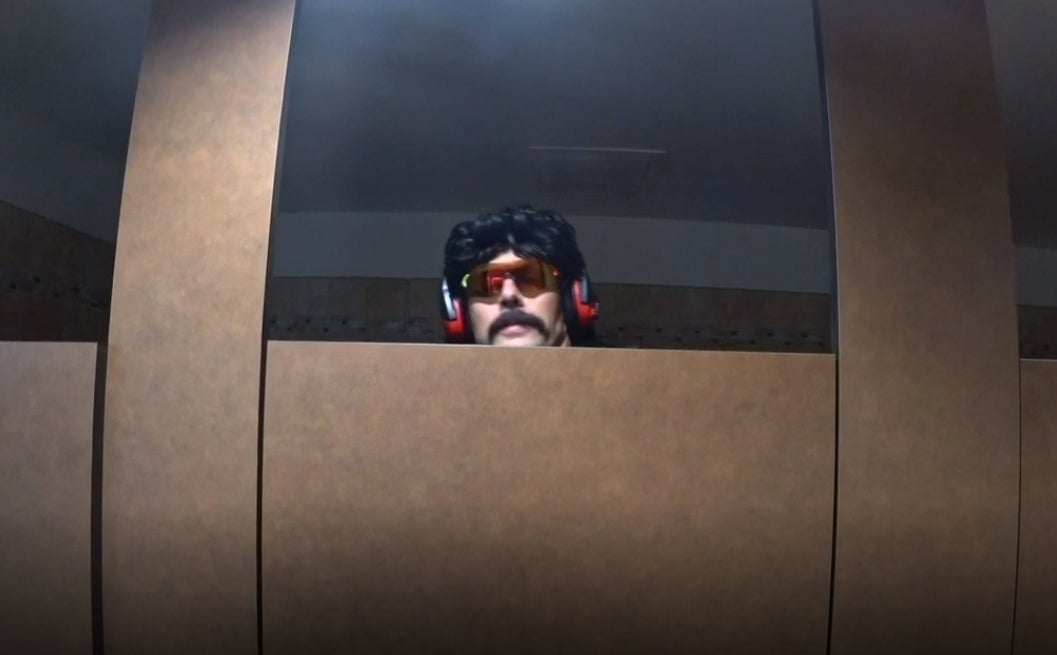 Yesterday, popular Twitch streamer Guy “Dr Disrespect” Beahm walked into an E3 bathroom and walked out without a Twitch channel. This action likely violated the platform’s terms of service. His E3 badge got revoked shortly after. It’s incredibly rare for a streamer of Dr Disrespect’s popularity to get banned, and already, it’s creating ripples.

Streamers from countless corners of Twitch have weighed in on the ban, on which neither Dr Disrespect nor Twitch have commented so far. Foremost among those streamers has been Jaryd ‘Summit1g’ Lazar, who believes he’s gotten a boost from the disrespectful non-doctor being out.

“I think I’m getting viewers because Doc got banned,” he said during a stream yesterday evening, suggesting that people were rushing into his stream to come and tell him about the ban. “This is working out for me really well.” He continued in a joking tone: “Listen guys, if [Dr Disrespect’s subscriber-based] Champions Club is no longer available, then the only place left is the 1G Squad. We’ll accept you, I guess. For five dollars.”

It’s tough to measure what kind of impact Dr Disrespect’s disappearing act is having on viewership across Twitch. Some particularly loyal viewers probably only tune in to Dr Disrespect and don’t use Twitch in his absence, but others watch multiple streamers. Odds are, those people are fanning out to watch other streamers in Twitch’s upper echelon, rather than checking out the channels of well-meaning randos, because Twitch’s browser and algorithmic recommendations largely favour bigger streamers.

Also, big streamers tend to play with other big streamers, so Doc’s fans already have plenty of exposure to Summit, Shroud, TimTheTatman, and streamers of the like, so they’re likely go to check them out in Disrespect’s absence.

Broadly, streamers seem understanding of the ban because, well, Dr Disrespect strolled into a public bathroom with a camera in tow. Multiple times. It doesn’t get much more clear-cut than that.

“When he first started walking into the bathroom, I said to myself, ‘There is no way—no way—he’s gonna let that camera follow him in there.’”

“It’s a no brainer, dude,” said blue-haired Twitch god-king Tyler “Ninja” Blevins on Twitter. “I love him, but when you break the rules you get punished. It’s that simple.”

TimTheTatman had a similar, albeit more surprised take. “It was the best content I’ve ever seen—until he walked into the bathroom,” he said during a recent stream. “When he first started walking into the bathroom, I said to myself, ‘There is no way—no way—he’s gonna let that camera follow him in there.’ And he just went in, and I don’t know who the camera guy was, but he’s getting close [to people]. And then after they left, I was like ‘OK, thank god, we’re out of the bathroom,’ but then he walked back in with the camera guy. What are you doing, man? I love Doc. I would like to think it was just a lapse of judgement.”

Problem is, Dr Disrespect has a pattern of lapses in judgement, such as when he jokingly threatened the lead developer of PlayerUnknown’s Battlegrounds with physical violence or when he used a mock-Chinese accent on stream.

Other streamers were less charitable in their assessments of Doc’s character.

“Doc [a] is fucking moron,” said longtime streamer Ezekiel III on Twitter. “I enjoy people who are crass, tasteless, and fearless. What’s unforgivable is total stupidity. This was SO dumb even I wouldn’t have done it. The thought process behind this must have been written on a napkin with shit stains on it.” 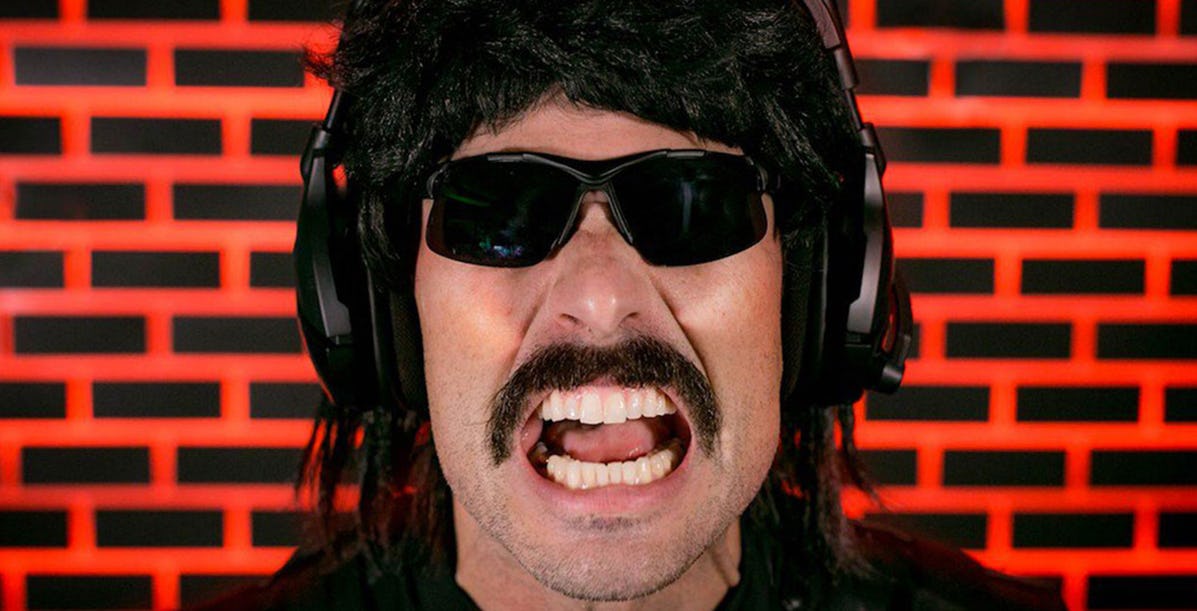 “All I’m saying is if anyone ever filmed my child using the bathroom, and ESPECIALLY if they streamed it to thousands upon thousands of people, I would do anything possible to absolutely ruin him in every way,” said Twitch partner BijouDemi. “Fuck Dr Disrespect.” She also says that Dr Disrespect fans stormed her mentions for making those comments.

There are, of course, Doc sympathisers. Whether joking or not, Fortnite star Turner “Tfue” Tenney tweeted out a picture of himself photoshopped to look like Dr Disrespect with the message “Free Dr Disrespect.” That sentiment has been expressed more broadly in Dr Disrespect’s community, where many understand that the ban was deserved, but sadness, disappointment, and defensiveness are rampant.

Some are suggesting that this wasn’t a representative moment for Doc and that the community should put its best foot forward in his stead while he’s getting so much attention. Others are spewing vitriol at folks speaking ill of the displaced doctor. There are also a few different strains of denial running through Doc’s community.

Foremost, some are splitting hairs over whether or not a person in the bathroom stream was actually a minor, citing E3 rules that disallow minors (rules, by the way, that I’ve seen people bypass countless times over the years while attending E3).

“I like people trying to justify how a grown man filming himself inside a public restroom 4 times is totally acceptable because it somehow might not have been a minor lol,” wrote one fan, responding to a Dr Disrespect subreddit thread on the subject. “The minor detail isn’t even the main point. It’s the fact he walked into a bathroom on 4 different occasions and filmed random people.”

Others are penning tearful farewells, saying that if this really is the end of Dr Disrespect’s Twitch run, he went out on his highest note ever with his first IRL stream. You know, until the bathroom thing.

“They don’t want those viewers—those millions of viewers—to go elsewhere and watch.”

But is this really curtains for Doc? Probably not. He screwed up, but Twitch has a history of giving oodles of leeway to its biggest assets—a pattern streamers think the company will repeat with Dr Disrespect and his 3.5 million followers.

“It’s gonna make big news,” said satirical streamer Kaceytron during a recent stream. “It’s gonna be what they’re saying about Twitch. It’s bad publicity for Twitch. So of course it’s going to piss them off, and they’re going to give him probably a lengthy ban for somebody of his size.”

She does not, however, believe it will be permanent. Neither does streamer and game developer CrankageGames, who published a lengthy video on the subject.

“He brings in a lot of following and a lot of money, but that’s not quite the reason they would keep him,” he said, noting that he doesn’t expect the ban to last any longer than a couple of weeks.

“The guy is a publicity magnet,” he concluded. “He’s gonna be bigger now than ever, when he comes back. This was a blessing in disguise for the guy. I guarantee it.”

Last time Dr Disrespect went on an extended Twitch hiatus due to poor decision-making, his return brought him nearly 400,000 concurrent viewers—a personal (and nearly Twitch-wide, at the time) best.

If you’re big enough on Twitch, even blatant public failure is just a brief detour on the road to further success.