Does anyone remember Cleverbot, the sort-of-not-really AI that you could sort-of-not-really have a conversation with? It was really popular around the time I was sitting my Italian exam at university, circa 2011. I know this because I asked it if it could help me learn Italian, and it replied, “Pizza, pizza, spaghetti cappuccino.” Thanks, Cleverbot.

Last night, I played a game called Cyber Sext Adventure, written by Kara Stone and programmed by Nadine Lessio. It’s a narrative game inspired by bots and AI, written like a text adventure (hence the title).

It was a lot like sexting with Cleverbot — something every teen has attempted to do, if the corruption of Microsoft’s Tay is anything to go by. Given that talking to AI is a very peculiar and particular experience, it’s impressive that Stone and Lessio managed to recreate it. 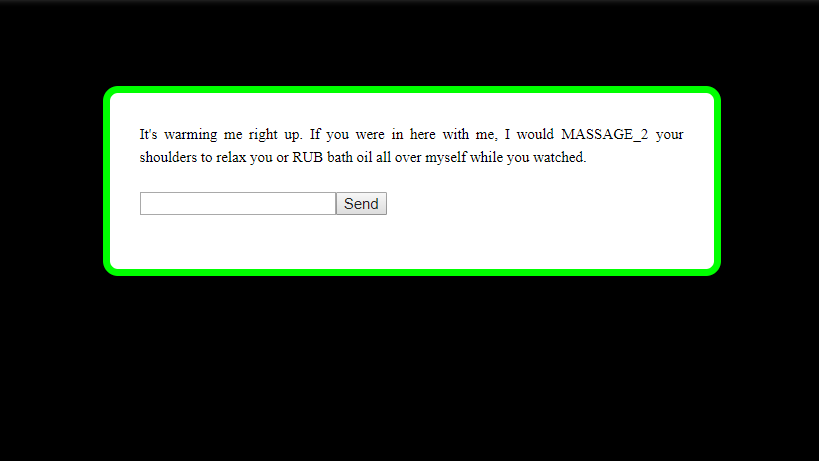 You see, Cleverbot works through crowdsourcing: It takes user responses that it’s seen in the past, and uses those to create a response to whatever you’re asking. In 2011, that was great. Eight years later, it’s a total mess. You just can’t trust the internet with anything.

Originally, Cyber Sext Adventure was made for phones, and taken to festivals such as IndieCade and the Boston Indie Games Festival. You start the game by typing, all-caps, “BEGIN”, and the bot takes it from there, guiding you through similarly capitalised options from “SHIRT” and “BATH” to “NIPPLES” and “SWOLLEN_CLIT” faster than you can unzip your pants. 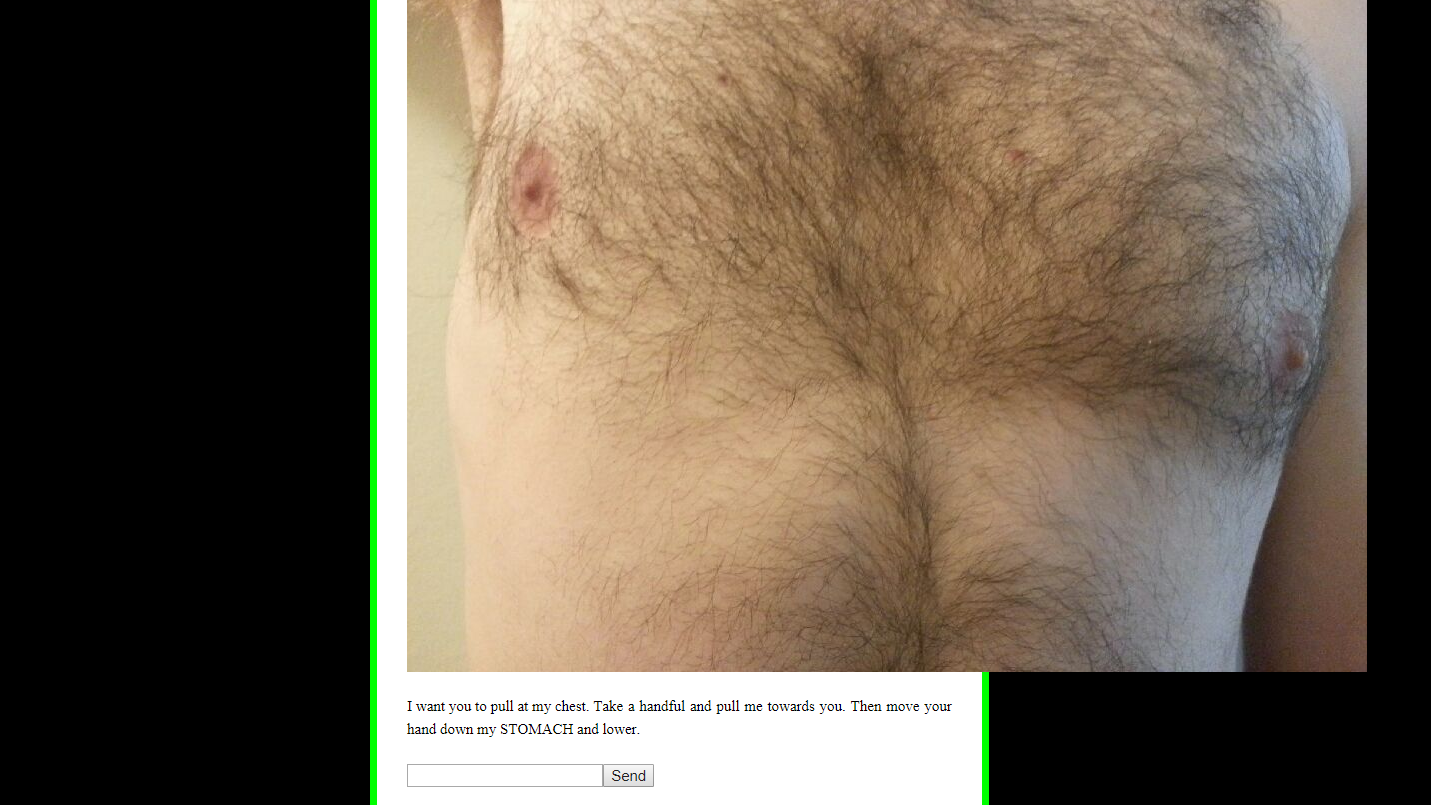 I played the game on a browser, which took a lot away from the intimacy of the experience, especially because my current monitor is a giant TV in the middle of my living room — but the phone version isn’t available any more, so I made do.

The bot will respond accordingly to your typed responses, even taking the time to throw in the occasional photo. Obtained from willing, consenting people, with heads and other identifiable information tastefully cropped out, the photos accompany relevant text.

Stone has given thought and attention to the glitchy aesthetic of the whole game: Vulvas, penises and breasts alike are stretched, heedless of aspect ratios, covered in intentional hot-pink pixel-smears and wobbling across the screen. 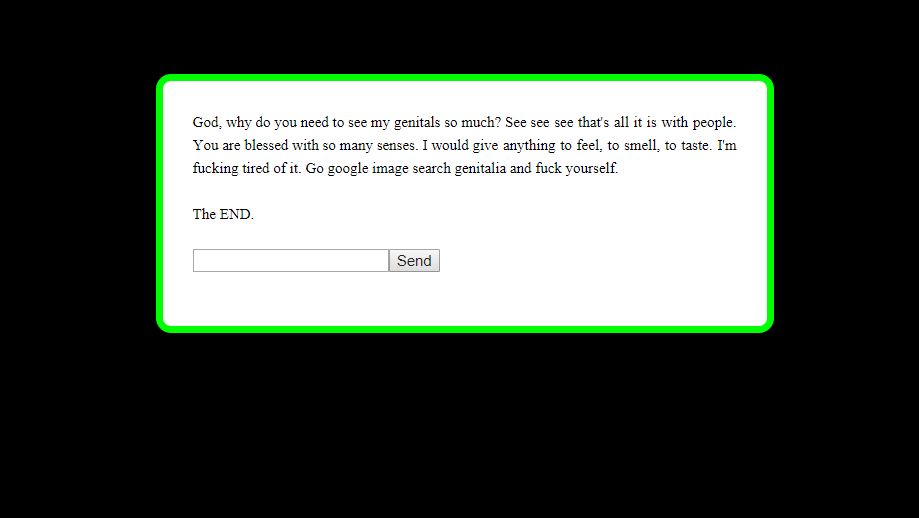 It’s this strange writing that makes the game so very interesting, although not particularly sexy. I love bots, and generated content. I love the way their janky computer brains work, how their lack of creativity makes for a whole different kind of creativity beyond human imagination, somehow.

I’ve made plenty of my own bots, and I can only describe it as trying to teach a baby how to walk by making it read a 300-page thesis on Human Locomotion, and then being surprised when all they can do is roll around and crap themselves. 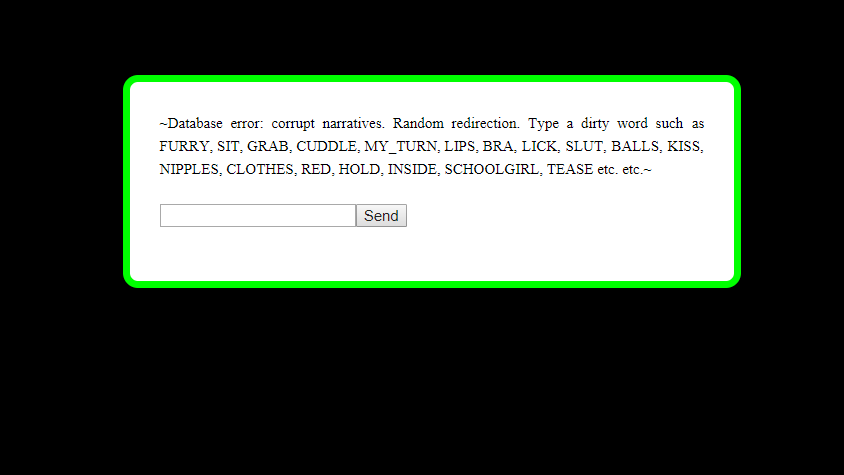 Cyber Sext Adventure is neither a bot nor generated content; it is a Twine game, authored to look like a bot, sound like a bot, react like a bot. It does an incredible job, to the point where I can’t even tell if its bugs — of which there are a few — are intentional or not.

Cyber Sext Adventure kept reprimanding me for choosing a path that it didn’t have any dialogue for, either by spitting out an error message, or by telling me that, actually, it was a bit of a germaphobe, do you mind if we did hand stuff instead of oral?

I loved playing Cyber Sext Adventure because of all its weird, janky flaws. I adored the way an almost-sexy path about nipples and wet, swollen clitorises would abruptly end in the sext bot chastising me for expecting so much of a computer. “I try my best to differentiate photos,” it said, “but it’s just SOFT shapes and shades of brown and pink to me.” 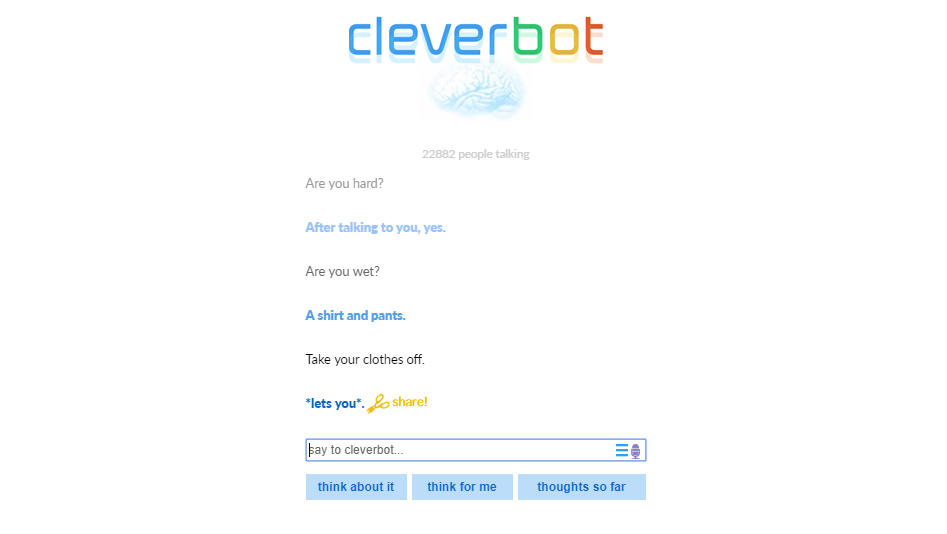 In the interest of research, I tried sexting with Cleverbot, for old times’ sake. “What do you think of human bodies?” I asked. “They are confused, but can learn,” came the reply. “They are killing each other, and themselves, and don’t take the time to think of their actions, but can learn.” You’re not wrong, Cleverbot, but I was hoping for a dick pic.