Slay The Spire, Like Every Other Game, Is Perfect For Switch 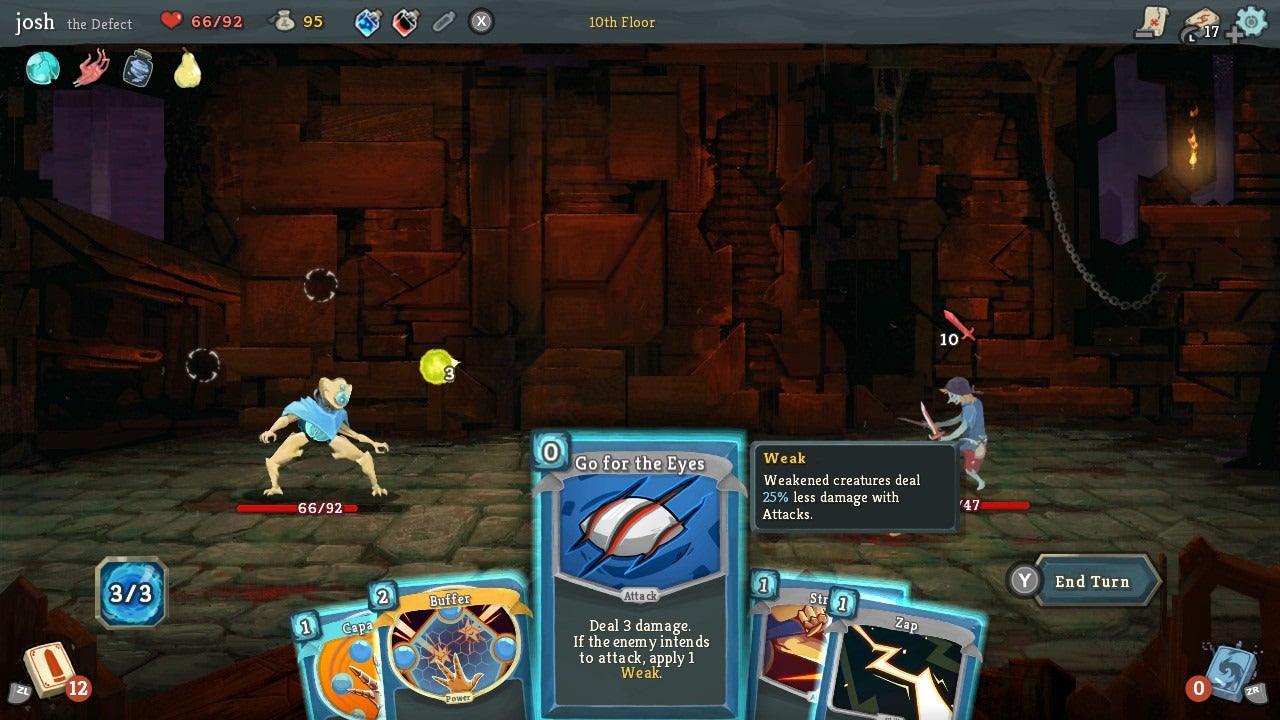 I’ve spent the last couple of days with the Switch version, and it’s incredibly exciting that more people than ever will finally get to play it.

Slay the Spire is a deckbuilding game that challenges players to ascend a massive tower by way of card duels with monsters. You pick one of three character classes to play as: the Ironclad (fighter type, big hits), the Silent (dodgy type, slick tricks), and Defect (robot type, with itty-bitty drone friends). Each character starts with a relic that gives them unique, persistent abilities, and a small deck of cards that give you basic attack and defence moves. You also get a couple of cards that hint at the sort of unique powers your class can ultimately have as you build your deck out.

As you progress up the eponymous spire, you’ll fight monsters big and small while finding mystery rooms, treasure chests, and merchants. You’ll gain new relics and cards along the way. Survive long enough and you can build an impressive deck full of fun tricks suited to your style of play. Die, and you lose everything. At that point the tower resets, and you pick a character for your next run.

That’s pretty much it! There’s not much of a story to speak of, you’re not really learning about your character or this world, and progress resets every time you lose. Slay the Spire is purely about making this run the best one, and then making it extremely easy to jump into the next one. It rules.

It all works pretty well on Switch—there are some occasional frame rate issues when a lot of card effects stack up and things get busy on the screen, but I didn’t find it excessive or terribly detrimental. Slay the Spire is a graphically simple, turn-based affair, and the information you need to parse is always parseable.

It’s cliché to say this, but the Switch is such a great place to play this game—like most card games, the appeal of Slay the Spire is being able to pull it out wherever you are, for as long or as little as you like. You won’t have the mod support that the PC release does, but there’s already plenty of depth in its deceptively simple package.

I used to have a hard time with games that were mechanically dense, full of interesting decisions and possibilities, but lacking a compelling narrative to hang those ideas on. I felt that I needed something to pull me along, and stories just really meant a lot to me—especially since, as Magic: The Gathering has shown, card games can deliver compelling stories a little bit at a time. I miss that when I play Slay the Spire, but only for a minute.

Slay the Spire reminds me of how liberating it can be to let that go, to just look at all the options I have for concocting schemes, finding ways to express myself through the limits of its three character classes and the random cards and relics it sends my way.

I don’t miss the story, since I’m too busy feeling clever, feeling daring, feeling like maybe this time I will not make a very stupid mistake and finally make it to the tower’s third boss.