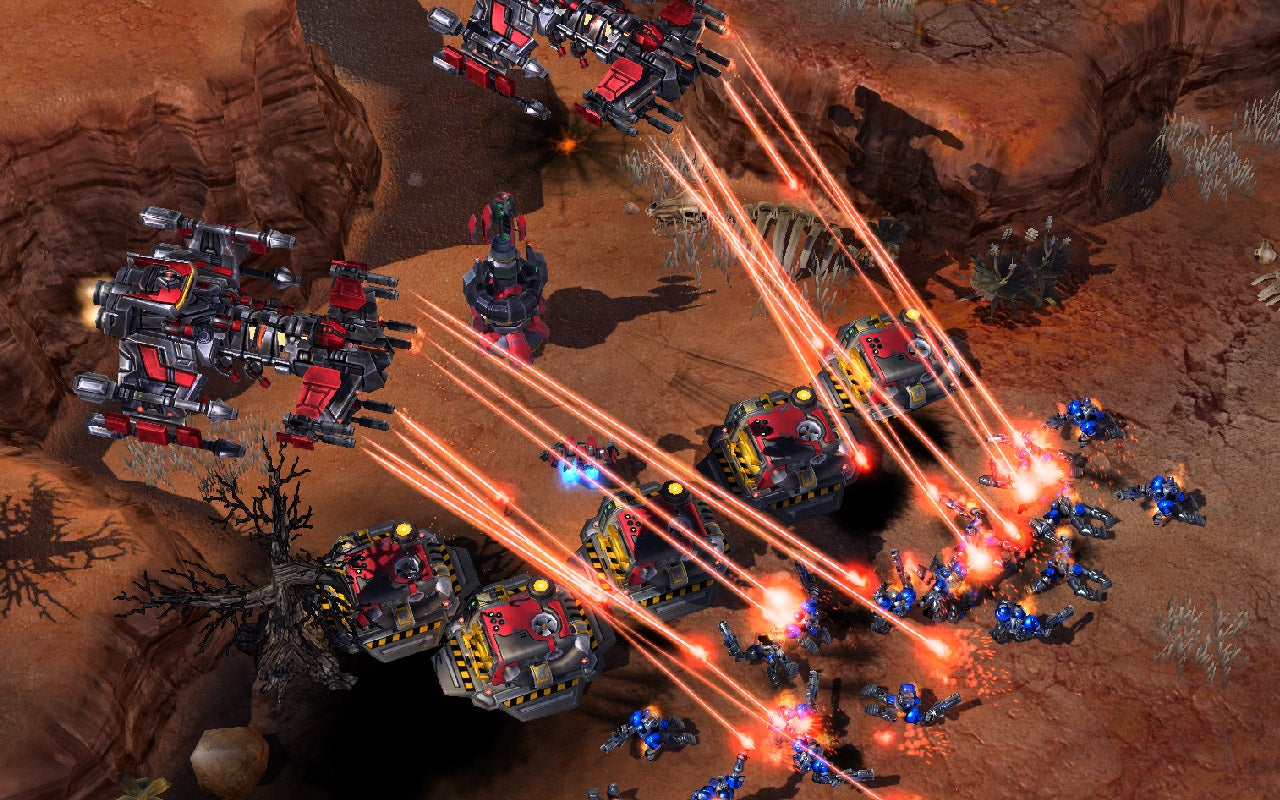 The project, which was code-named Ares, was described to me as “like Battlefield in the StarCraft universe” by one of those people, all of whom spoke anonymously because they were not authorised to talk about the project.

The team had built prototypes in which the player, as a Terran marine, could gun down Zerg aliens, and there were plans to experiment with playable Zerg as well. Although one person who saw builds of the game last year told me that it seemed like development progress was slow, a second said it came as “a massive shock” when Blizzard canceled it a couple of weeks ago. A third person said it was “looking quite good.”

When asked for comment, Blizzard sent over a lengthy (and non-specific) statement, which you can read in full at the bottom of this post. “We always make decisions about these things, regardless of the ultimate outcome or how things might be interpreted, based on our values, what we believe makes sense for Blizzard, and what we hope our players will enjoy the most,” the company said.

Nobody was laid off as a result of the cancelation, and according to two staff, Blizzard told the team that Ares was getting axed (alongside a second unannounced mobile project) so that the company could move many of them to the upcoming Diablo 4 and Overwatch 2, both of which are expected to be Blizzard’s marquee announcements at this year’s BlizzCon.

(Of course, as we saw last year, when it comes to BlizzCon announcements, anything can change.)

Both of those games will be key parts of Blizzard’s strategy in the years to come. We reported extensively on Diablo 4, code-named Fenris, late last year, and what we’ve heard about Overwatch 2 (or whatever it winds up being called) is that it’ll have a large PVE element. (A couple of Blizzard people have compared it to Left 4 Dead.)

Ares first entered development in 2017 as an experiment to see what the team could do with StarCraft on the Overwatch engine. An engine is a suite of tools and reusable code that developers use to make games, and Blizzard has been hoping to move as many games as possible on the same technology in order to make their infamously slow game productions more efficient.

(That plan revolves around the new shared engine that’s being adopted by multiple Blizzard projects.)

Heading up Ares was the veteran Blizzard director Dustin Browder, who formerly led Heroes of the Storm and StarCraft II, and it was planned to be the next game in the StarCraft universe.

Of course, this isn’t the first time Blizzard has canceled a StarCraft shooter. The infamous StarCraft: Ghost, a third-person shooter-stealth game that would star the Terran Ghost Nova, went through several developer changes and public delays after its 2002 announcement before it was finally axed in 2006.

We don’t generally comment on unannounced projects but we will say the following:

We always have people working on different ideas behind the scenes – including on multiple projects right now – but the reason we tend not to discuss them publicly is because anything can happen over the course of development. As has been the case at Blizzard numerous times in the past, there is always the possibility that we’ll make the decision to not move forward on a given project. Announcing something before we feel it’s ready stands the risk of creating a lot of frustration and disappointment, both for our players and us, not to mention distraction and added pressure for our development teams.

We pour our hearts and souls into this work, and as players ourselves, we know how exciting it can be to see and know with certainty that a new project is coming. Knowing that changes or disappointments can happen doesn’t make it any less painful when we have to shelve a project or when an announcement doesn’t go as planned. We always make decisions about these things, regardless of the ultimate outcome or how things might be interpreted, based on our values, what we believe makes sense for Blizzard, and what we hope our players will enjoy the most. The work that goes into these projects – whether they ship or not – is extraordinarily valuable. It often leads to great things and helps foster a culture of experimentation here.

With all that said, we’re very much looking forward to revealing other things we’re working on when the time is right.