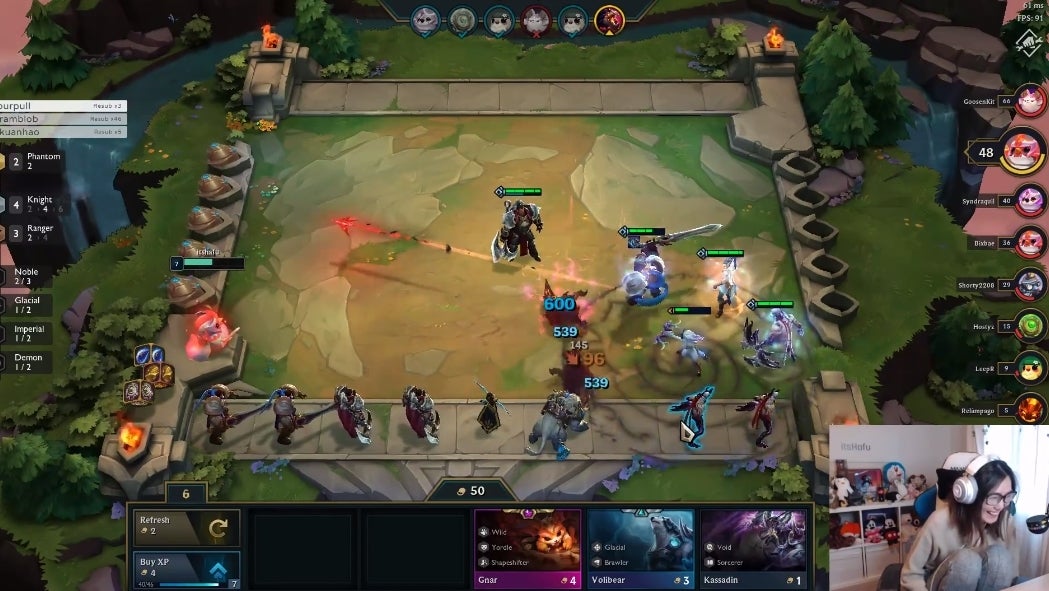 Rumay “Hafu” Wang’s record is nothing to sneeze at. She’s won multiple major World of Warcraft tournaments, and she’s dominated Hearthstone’s rankings month after month. Still, she feels as though people don’t hold her accomplishments in the same regard as those of some of her male peers. That’s why she was thrilled to close out the Teamfight Tactics beta in first place.

Teamfight Tactics is Riot’s spin on massively popular Dota 2 mod Auto Chess, in which players purchase units, combine them, and synergize them in order to make tiny armies that automatically duke it out on a round-by-round basis. With the Riot auto battler’s unsurprisingly successful beta recently coming to a close, the company has decided to deploy data about how it all went down. This includes a list of the top players as sorted by matchmaking rating, or MMR. With 2,466 MMR, Wang was at the very top of the list, beating out a stacked field of talented streamers, players, and pros. Fans, devs, and other players showered her with congratulations. During a stream yesterday, she talked about why this moment was especially vindicating for her.

“I’m gonna cry talking about this, but like, it’s kinda hard for girls to get respect in gaming in general,” she said. “And I’ve always had my accomplishments kinda squandered. Even when I won tournaments, people would say, ‘Oh, you got carried,’ or whatever. In two different games! With multiple tournaments! It always felt so bad, man. People never give me any credit!”

She went on to say that at one point, while she was streaming Hearthstone, she checked with Blizzard on a hunch that she was better than popular players like Octavian “Kripparrian” Morosan and Jeffrey “Trump” Shih, and the company told her she was 8th while the aforementioned players were “like 400th and 1,000th.” But Blizzard didn’t publicise that kind of data at the time, so Wang was forced to deal with people assuming she just wasn’t as good.

“People thought I was just worse than them,” she said. “Like, not even equal, but worse. Anytime I saw my name on Reddit, people would just throw my name in the mud and say I was so bad. And people wouldn’t watch me because I was a girl. It sucked.”

Data came out later that proved those people wrong, but until then, Wang couldn’t help but feel frustrated and powerless. That’s why she’s so glad she’s getting credit right off the bat in a big new game in an enormous new genre.

“I’m so thankful to Riot, for them posting it,” she said, visibly tearing up. “It means a lot to me.”