The Conflicted Legacy Of The Marvel Netflix Experiment

With the release of Jessica Jones’ third and final season, a TV experiment four years in the making is over. Whether laid low by Disney’s own streaming plans or because simply it began to be more trouble than it was worth to Netflix, its legacy is now etched in stone: chasing a comic book weirdness that it had once proudly eschewed.

It’s hard to imagine that it’s “only” been 11 years since the Marvel Cinematic Universe kicked off, and with Iron Man, found success in a tone that respected its comic book material while grounding it in a way that made sense.

After all, right now we’re still coming off the audacious highs of Avengers: Endgame, the culmination of the last several years that delivers, for all that’s good and all that ails it, a completely batshit, time-travel induced smörgåsbord of comic book event storytelling that wildly, gleefully revels in the sugar rush of its own ridiculous high.

In the midway point between that tonal transformation for the Marvel brand, we found Daredevil, then fronted by Stephen S. DeKnight, in 2015. At a time when the movies themselves were starting to lean into that weird spectacle a little more – god, that earnest time when we were all thinking, “How is Marvel gonna make a talking raccoon and a tree that says its name over and over work?”…and —the arrival of the first show in what would grow into the Defenders project felt like a breath of fresh air.

Or really, a smash to the face.

Daredevil’s commitment to a dark, grounded tone as Charlie Cox’s Matt Murdock limped and punched his way through the Kingpin’s thugs in that bloodied, slick first season represented the boldest statement a Marvel show could make at the time.

This was a street-level story, away from the sheen and glitz of Avengers Tower, one that didn’t need elaborate superpowers or cosmic beings to sparkle. Give Matt a black headwrap, some batons, and a corridor, and watch him make visceral, violent storytelling art.

By treating its battered and broken protagonist as the consequences of an existential struggle with the act of heroic vigilantism itself, Daredevil presented a complexity to the superhero formula that the Marvel movies couldn’t even dare to contemplate.

Like a one-two punch, Netflix followed up with an equally daring mirror to the Marvel formula in Jessica Jones, helmed by Melissa Rosenberg. While Krysten Ritter’s less graceful protagonist couldn’t quite land a hit as slickly as Daredevil could, Jessica Jones offered a more emotively cerebral examination of comic book weirdness.

In taking a supervillain like the Purple Man and turning him not into a simple opposing force to punch into submission (that’s something that even now, the Marvel movies still kind of struggle to do effectively), but a haunting specter that chased Jessica and her own struggles with trauma over the first season, Jessica Jones offered a fascinatingly timely, foreboding take on what a world with superpowers could realistically look like. 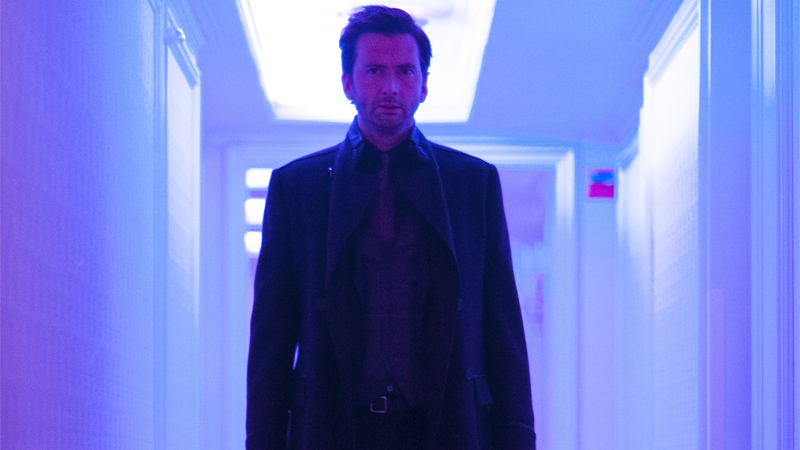 Like Daredevil before it, this was not the sort of gritty storytelling you could get from Marvel at the box office. The Defenders characters and stories quickly established themselves as a street-level manna from that still-occasionally embarrassing goofiness we felt sitting down at the movies for the latest Spandex-clad bit of spectacle.

But that initial boldness began to falter after Guardians of the Galaxy’s gleeful release the year prior served as a wake up call to Marvel that it could not only get away with practically anything from its source material and not turn general audiences away, but openly and joyfully embrace that source at all times.

When the Netflix universe tried to play catchup in that regards, things started falling apart. In season two, Daredevil’s rapid descent into the ninja underpinnings of the character’s most famous comics tried to square the circle on the comic book ratio, sacrificing the tone of its beloved first season, but never really going far enough to commit to the inherent, joyful pulpiness behind the premise.

Its greater success was more in creating the grounds for a Punisher spinoff with guest star Jon Bernthal than in service of the rest of Daredevil’s characters.

Cheo Hodari Coker’s debut with Luke Cage showed an early promise, but it never quite reached the highs of its companions in Daredevil and Jessica Jones, treating the more outlandish aspects of Mike Colter’s version of the character with a corniness that was only charming at a surface level.

Iron Fist’s launch is perhaps the most emblematic of the push and pull between grounded tone and a yearning to be as weird as the source material. To scathing critique, it tried to take the most supernatural and superheroic of all the Marvel Netflix characters and desperately run away from any hint of comic book silliness or scale.

Infamous Inhumans showrunner Scott Buck’s first (and only) season on the show told a mystical martial arts tale that lacked the vibrancy of the mysticism or, for the vast majority of the first season at least, the energy of some actually good martial arts.

The fact that Danny Rand spent more time in a business suit than he did in any form of costume was symbolic of the series’ fumbling, seemingly a fear of acknowledging the roots of its character (and yet, it was blinkeredly beholden to them when it came to casting Finn Jones as its protagonist). 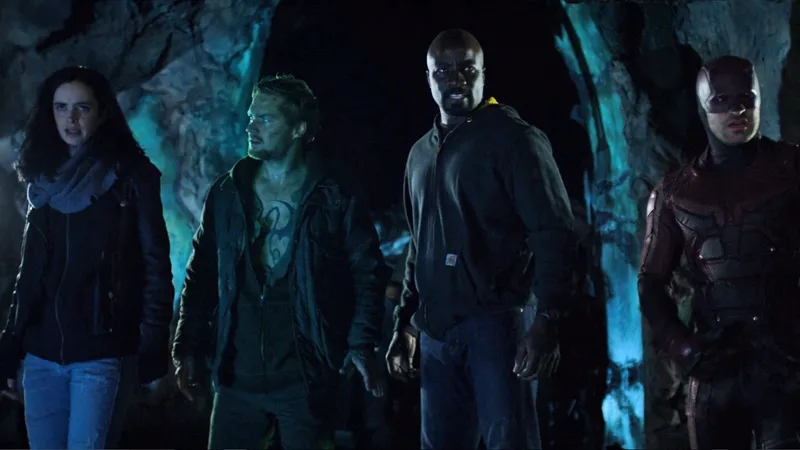 more than it did jamming together comic connections, but that even this grand coming together couldn’t really be as weird as a superhero team up should be, even for grounded heroes, was telling.

The Defenders culminated in a single building crashing down in Hell’s Kitchen, the end of a confusing plan its villains spent eight episodes only vaguely hinting at.

The same year, its movie siblings sent Thor to space in Ragnarok, made you care about a sentient arsehole of a planet in Guardians of the Galaxy Vol. 2, and had a new Peter Parker debut, meant to be the closest thing to a “street-level” hero the films had, high-fiving Tony Stark and fighting the Vulture in Spider-Man: Homecoming. 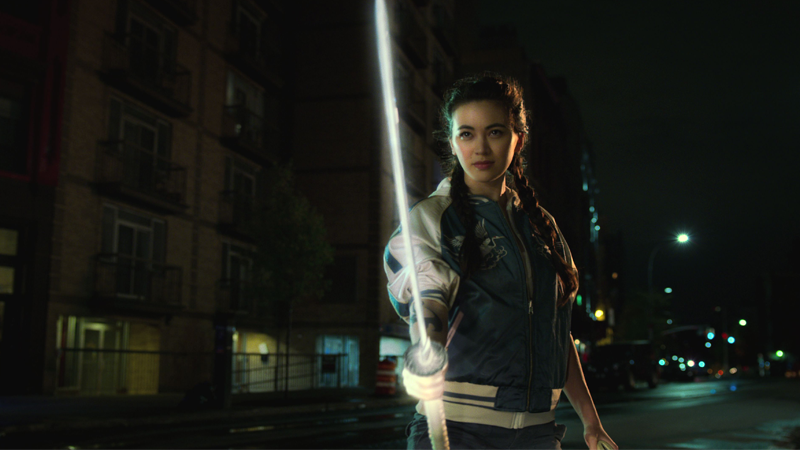 We’ll never get to see Colleen Wing as the Iron Fist, and that’s sad. (Photo: Netflix)

Yes, vastly different budgets create vastly different spectacles, but this was something different. By this point, the Marvel movies had truly embraced the silliness and grandeur inherent to their source material, while repeatedly brushing aside questions of just how interconnected the TV shows were to Marvel’s movie projects.

Another Marvel show, Agents of SHIELD, had gone a bit more wild too, catapulting its little superspies-that-could into their own intergalactic adventure, a far cry from its early days.

The Marvel Netflix shows were starting to feel like they were being left behind by a general acceptance of the weirdness they had once been praised for eschewing—making the conversation of just why these seemingly all-connected shows continued to feel more and more distanced from their cinematic cousins all the more awkward for Marvel to try and dance around.

This isn’t to say that these shows couldn’t surprise, even as the MCU continued to evolve into the bonkers, all-consuming titan it now is.

Part of the reason that Iron Fist’s initial cancellation announcement was so shockingly unexpected was because it had, in a lot of ways, just gone about drastically improving itself and offering a bold direction for its future.

Luke Cage, while perhaps the most sedately received of all the Marvel Netflix shows, was likewise throwing curveballs for its lead character that felt like the ignition of its most fascinating spark yet.

Daredevil’s third season refocused the show on what made its initial debut so intoxicating in the first place (and yeah, we’re still mad that incredible fight scene can’t get Emmy recognition).

While the decisions had already been made by that time, Jessica Jones’ farewell gave some much needed superheroic oomph to its world while exploring a fascinating, intimate character evolution for Trish Walker.

The Punisher’s preponderance of simple violence might have made it a weaker link, but it still had some fascinating reflections between its compromised heroes and villains. 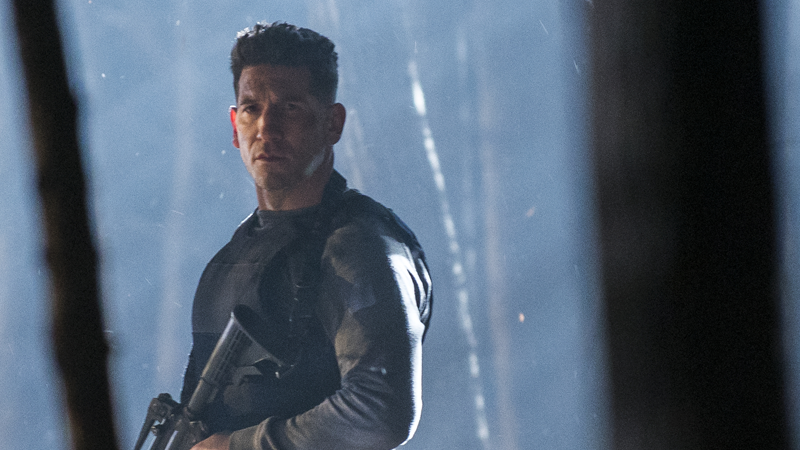 apparently didn’t, so maybe there was indeed going to be a move toward the weirder, comic-bookier side of things going forward—just as the Marvel movies themselves had begun to embrace it over the years—even if it was too little too late for some viewers.

But now we won’t ever know, and the teases for that exciting future left in each of these shows now-final seasons sting with the sadness that these heroes won’t get more time in the spotlight.

At least fans got some time, albeit brief, to see these Marvel heroes brought to live-action for the first time. With Marvel Studios’ streaming plans now firmly focused on Disney+—and the might of getting to namedrop characters and stars from the films, instead of having to rely on building up new inductees from the comics as Netflix did.

It’s clear it’ll be a while before we see characters as innately, intriguingly challenging to adapt like Matt Murdock, Jessica Jones, Danny Rand, and Luke Cage were back in 2015.