godzilla king of the monstersio9kaijulegendarymothratohowarner bros.

Godzilla: King of the Monsters does a lot of things—the vast majority of them delectably silly—in order to rapidly veer its dumb-as-rocks human heroes from Monster Fight A to Monster Fight B.

But at one point, the movie was barreling along so fast, it dropped a very sneaky, very cool throwback I was almost unsure had actually just raced past me.

Over the course of King of the Monster’s globe-hopping chase to stop eco-terrorist Alan Jonah (Charles Dance) from using the Orca—a sci-fi MacGuffin developed by Doctors Emma and Mark Russell (Vera Farmiga and Kyle Chandler) that can influence the gigantic titans of Godzilla and his ilk—to unleash havoc across the planet, we’re introduced to a whole host of new scientists acting as part of the no-longer-super-secret monster research organisation, Monarch.

There are familiar faces, like Doctors Serizawa (Ken Watanabe) and Graham (Sally Hawkins) from the 2014 Godzilla, but they’re mostly new characters—including Zhang Ziyi as Ilene Chen, who for a very brief moment, drops some major hints to a piece of classic Toho monster lore. 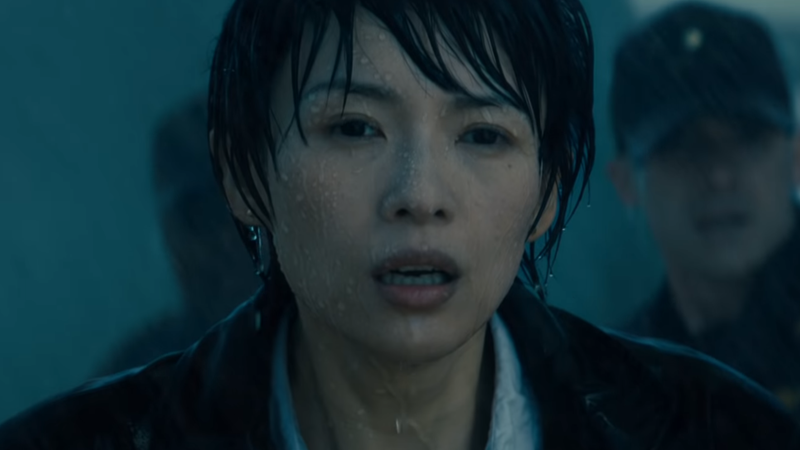 Mothra enters and exits the picture in Michael Dougherty’s King of the Monsters early on—after hatching in the opening scenes before Emma and her daughter Madison are faux-captured, the beast scurries away to a waterfall nearby to Monarch’s base in China to cocoon and recover.

Later on in the movie after Godzilla is seemingly knocked down for the count by a combination of Ghidorah’s frenzied assault and the U.S. Military’s new Oxygen Destroyer bomb—itself a callback to the weapon used to slay Godzilla back in the 1954 original—Mothra is glimpsed as emerging in her final, beautiful winged form by … Zhang Ziyi, despite the fact we’ve just seen her thousands of miles away witnessing Godzilla’s seeming death aboard Monarch’s flying battleship, the Argo.

Because it’s not Ilene Chen that Ziyi is playing in that moment, the character we’ve seen across the rest of the movie so far. It’s a Doctor Chen: her twin sister, named in King of the Monster’s credits as Ling Chen.

She’s out in the rain, quietly watching over Mothra’s rebirth as an ethereal version of the kaiju’s iconic Toho theme swells into the soundtrack. That’s all there is to her appearance—the movie, bafflingly, just refers to her as Doctor Chen, and never addresses that she’s Ilene’s sister, so for a moment you suddenly think she’s learned how to teleport herself from place to place.

The film brushes past it as quickly as it brings it up, but it doesn’t really confirm anything until after the fact when at one point in the ongoing chase for the Orca, Ilene reveals to Mark that she is actually the latest in a long line of Chens who’ve worked for Monarch. Her grandmother and her mother, and their female siblings, all worked for the organisation prior, dedicating themselves to researching the mythos and history around Mothra’s slumber on Earth specifically.

Back aboard the Argo Ilene shows Mark old family photos, pictures as being marked as taken on Infant Island—and you see an eerie similarity between the prior generations of Chens, beyond just being sisters, or mothers and daughters.

While it’s never explicitly acknowledged in the film, having a set of female twins so intimately linked to Mothra’s backstory and evolution in the movie is itself a subtle acknowledgement of over half a century of Toho moviemaking history. 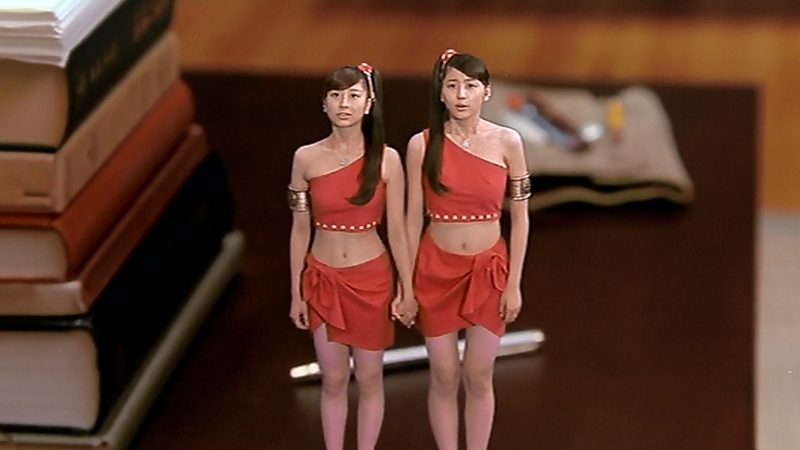 Back in Mothra’s self-titled cinematic debut in 1961, the gigantic creature resides on the isolated Infant Island—but when a Japanese expedition lands on its shores, they discover miniature twin priestesses who act as both guardians and translators for the legendary beast: the Shobijin.

The Shobijin have been a part of Mothra’s cinematic legacy from the beginning, and have appeared in nearly every one of Mothra’s movie appearances. Sometimes, they have different names: in Godzilla vs. Mothra, they’re called the Cosmos, sole survivors of an ancient civilisation destroyed in Mothra’s fight with its dark nemesis, Battra. In the Rebirth of Mothra films, they’re the Elias, and there’s actually a trio of sisters rather than a set of twins.

In the most recent CG animated series, Godzilla: Planet of the Monsters, they’re represented as human-sized characters named Maina and Miana, part of a human subspecies called the Houtua that were biologically altered by Mothra’s presence.

In all their appearances, the fairies have similar roles—they’re agents of Mothra, who act as not just her guardian but her ambassadors to the human world. Capable of psychically communicating with the creature (often through song—the original Shobijin were played by Emi and Yumi Itō, a twin pop act known as The Peanuts), they could both act as translators for whenever Mothra encountered humankind, but when the threat of various kaiju made themselves known to the world, the Shobijin would often venture out beyond Mothra’s hiding place on Infant Island and communicate her will, or be capable of summoning her out of her larval states across vast distances. 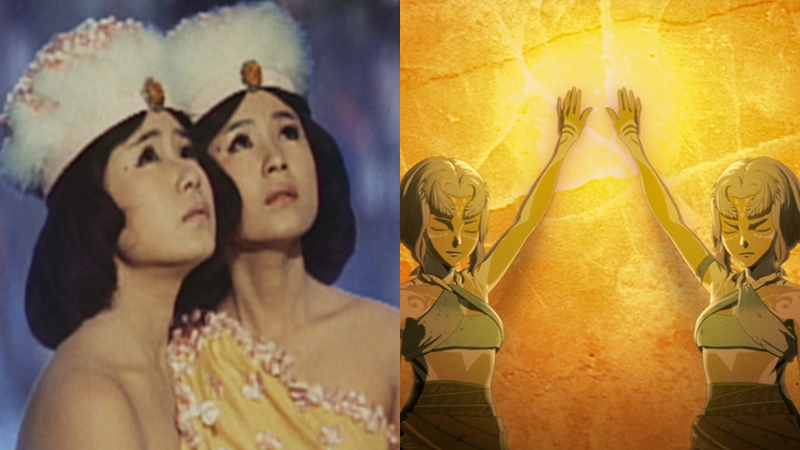 From 1961 to 2017, in one form or another, psychic twins have been a part of Mothra’s legacy. (Image: Toho/Polygon Pictures)

As far as we get to see in King of the Monsters, the Chens are simply human twins rather than secret psychic fairy people. Even in a world of futuristic stealth jet battleships, sonic monster cry manipulation, and even titanic, atomic-breath-spewing monsters, such an idea might be a little too out there.

Ling Chen only appears for a tiny scene, and although she and her sister share a connection to Mothra, it’s all left in a rapid series implications for diehard fans rather than made particularly clear, swept passed unsuspecting audiences as quickly as it’s brought in.

But among the monster carnage King of the Monster gleefully engages in—and all the other classic Toho easter eggs it weaves throughout—it’s a moment that stands out as one of the coolest, weirdest throwbacks to the bizarre monster movie history that inspired King of the Monsters in the first place.