The Cruel, But Cute, World Of Pikmin

Pikmin is a weird, but beautiful, 2001 game for the Nintendo GameCube where you play as a villainous alien intruder, Captain Olimar.

Olimar is from the planet of Hocotate and has crash-landed on a strange planet that has high levels of oxygen. Unfortunately, oxygen is poisonous to the captain and his life support will fail in 30 days.

A lot of unfamiliar creatures inhabit the planet and many of the areas are inaccessible to Olimar. Coming to his aid are the eponymous Pikmin, which are half-plant, half-animal creatures that look like walking flowers with two beady eyes stuck on their heads.

They’re totally obedient, but also totally helpless without someone to guide them. Olimar eventually accumulates an army of hundreds of Pikmin to help him recover his ship parts so he can escape.

There is a serenity to the real-time strategy of the game in that there’s not the typical adversaries that are at the heart of most RTS games: no grand army to fight, no malevolent evil to overthrow. The principal enemy is time. Pikmin is about survival and warding off the threats of nature. 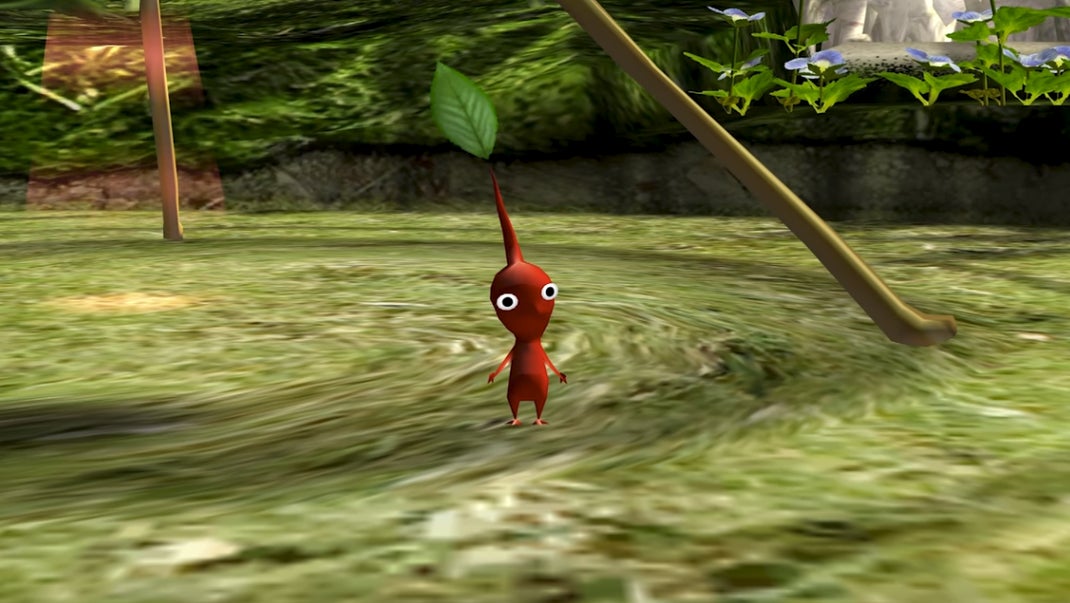 The Pikmin come in three vividly-coloured variants. The Red represents the majority of the working force and are the first you encounter.

Shortly after, you meet the Yellow Pikmin who can be thrown higher and can also carry bomb rocks. But as the captain soon finds out, the effect of the bombs can be devastating. “Oh, horrors! A bomb-rock explosion engulfed my Pikmin! That last horrified facial expression is burned into my memory.”

While the two other Pikmin types can’t go into water, the Blue Pikmin have gills so they can survive underwater. Together, the three types allow Olimar to explore the world and collect his ship parts.

The controls are smooth as Olimar guides the Pikmin like a herd with his whistle. He can toss the Pikmin to areas they can’t access by themselves and use their cumulative numbers to overcome most obstacles. No matter how tense the situation, the music is calm and almost meditational in contrast to the violent conflict surrounding them.

The Pikmin designs are super cute, reflecting their whimsical nature, while their voices are very endearing. They sound like curious babies and their helplessness without Olimar reinforces how much they need him.

It’s a symbiotic relationship where both appear to benefit each other. A lot of that assistance comes in the form (at least on the Pikmin side) of carrying heavy objects or moving things out of the way, like in the introductory chapter where 10 Pikmin have to move a cardboard box so Olimar can access his engine.

In turn, Olimar helps their numbers grow, saving them from extinction. Many Pikmin do die in the process. They let out weak cries as they do and their tiny souls ascend from their bodies, wracking me with guilt after each death.

Captain Olimar struggles with his guilt as well and his actions haunts his subconscious, as he notes in his voyage log: “I had a horrific dream last night. I was home. My wife was cooking the Pikpik brand carrots I love so much, and I was eating them. Though I had eaten my fill, she kept bringing more fresh carrots until my mouth was full. I awoke gasping for breath. I am certain it is because these Pikmin remind me of these carrots that I had such a dream.” 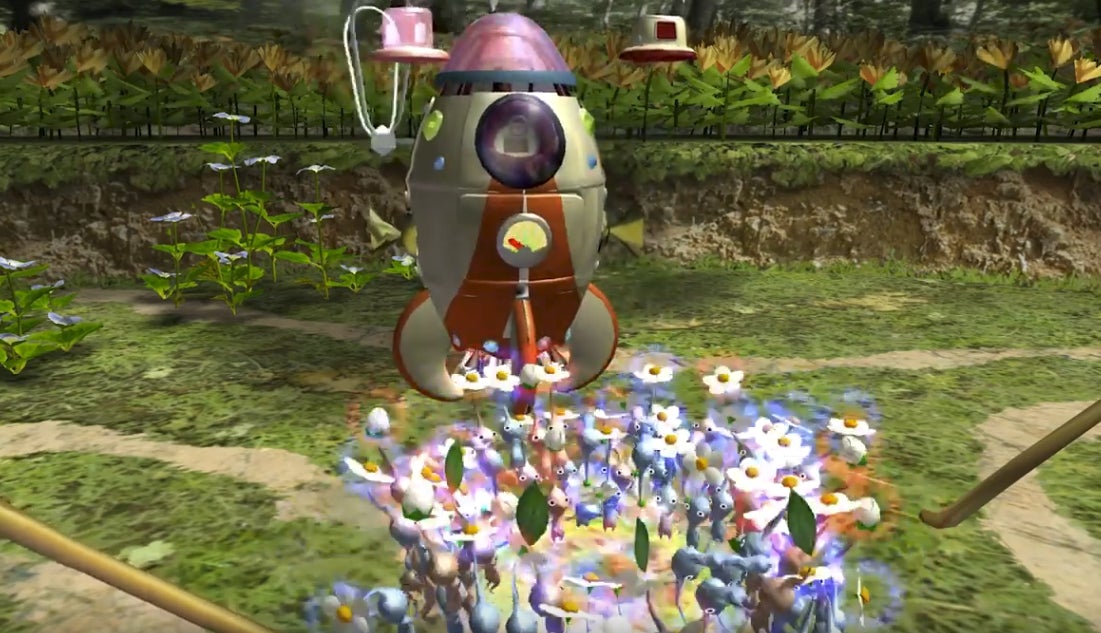 But who exactly are these Pikmin? Are they as helpless as they seem? Olimar struggles with the question: “At times, these seemingly emotionless Pikmin act with a blind urgency. For instance, the Pikmin who so tirelessly dig up grass… What could be driving them to do so? Is it merely the promise of a sweet taste of nectar? Or is it some base instinct that is beyond my capacity to understand? Will I ever know?”

From the perspective of the indigenous life forms, Captain Olimar is the evil force disrupting their natural order thanks to parts from his ship that have crashed all around their neighbourhood.

There are entire families of Bulborbs who are minding their own business until hordes of Pikmin come stomping their way and annihilate them. But death isn’t enough. Even though their souls escape, their corpses are carted to the Onion ships where they are harvested and recycled into more Pikmin that do the bidding of Captain Olimar.

Even Olimar has doubts about his actions as he wonders in one of his logs: “No matter how many of their compatriots fall in battle, the Pikmin fight on. Would this have been a peaceful planet had I never come?”

He replies to the negative and tries to justify his actions. “Surely the Pikmin lived like this before my arrival. They MUST have. In any case, I must not waver if I hope to return home. My task now is to do whatever I can to recover all of the Dolphin’s missing parts.”

The more of the areas I explored, the more I slowly begin to realise that the planet Olimar crash landed on is Earth. In the Final Trial, you have to gather your Pikmin, go across a fortified area to track down the Emperor Bulblax.

He’s the final boss and by far the toughest opponent in the game. He’s also totally innocent, just chilling in his place and relaxing by himself until the Pikmin invasion force arrives.

What’s worse is that his defeat isn’t essential to the ship’s function. It just allows Olimar to retrieve the Secret Safe, where he stashes his money. In Olimar’s greed, he’s upset the meticulously crafted ecosystem that has evolved over time. 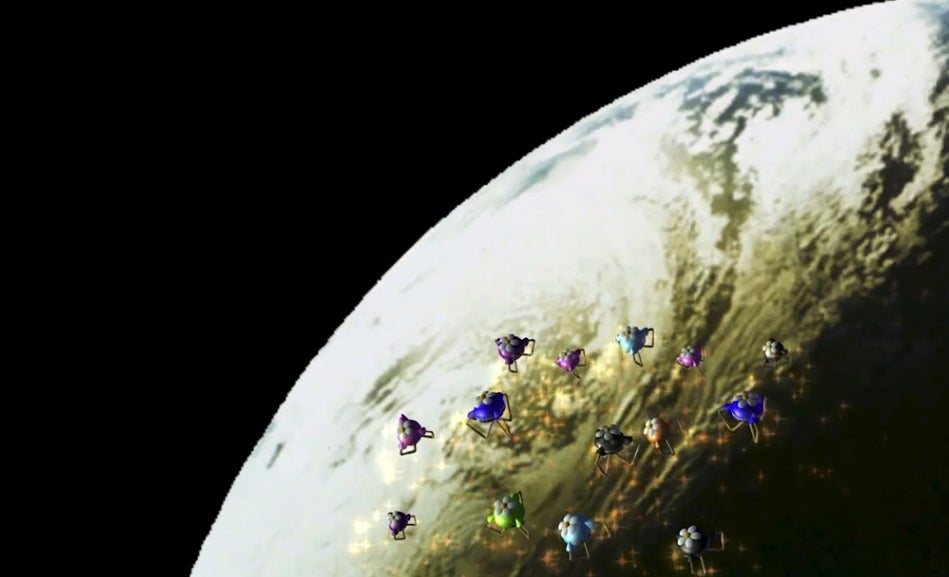 That made me wonder: What happened to the humans? Did the Pikmin have anything to do with their disappearance? If animals can be recycled and turned into more Pikmin, did that hint at humanity’s fate?

Is it possible Pikmin are recycled humans (they have their own language, have more than basic intelligence, and also follow strong leaders without question even if it might mean death)?

Had I unleashed a parasitic force, similar to the Tribbles of Star Trek, that the Earth creatures had fought so hard to vanquish? Just after Olimar finds all his ship parts and returns home, a bunch of Pikmin attack a wandering Bulborb without provocation. In the Earth’s atmosphere, numerous Onion ships appear, ready to take over the planet.

I had gone into Pikmin believing it to be a fun real-time strategy game that evolved from the Super Mario 128 demo, but I realised it was a horror game masquerading as a kid’s game.

Only the monsters weren’t vicious looking with obvious visual indicators.

They were cute colourful flower-like creatures, bent on global domination. All along, we thought Olimar was the conductor. But in reality, he was the one being manipulated to do the will of the Pikmin.