The Elder Scrolls Online: Elsweyr Adds A Shot Of Cat Charisma And A Lot Of Dragons

The Elder Scrolls Online has always seemed strangely reluctant to get weird. Even though Elder Scrolls games are at their best when they’re at their strangest, the opening hours of ESO’s main quests have always been surprisingly low-key. But ESO’s latest expansion, Elsweyr, takes us all to the eponymous home of the series’ beloved cat people, the Khajit, and it’s plenty weird. While it’s not an expansion that makes ESO a better game, it’s definitely one that presents a better version of itself.

Elsweyr resembles a fantasy take on what I, an ignorant American, imagine Australia to be—80 per cent scenic wildlife and 100 per cent trying to kill me at all times. Starting with 2017’s Morrowind expansion, ESO has established an update rhythm that works pretty well: Each year brings a big marquee new zone with a self-contained story, followed by three updates with quest and endgame content between. You can pay for all additional content individually or subscribe to ESO Plus and have everything available to you at once.

It’s a pretty good system that lets you buy into as much or as little as you like, with each expansion feeling like a fully fledged game of its own. 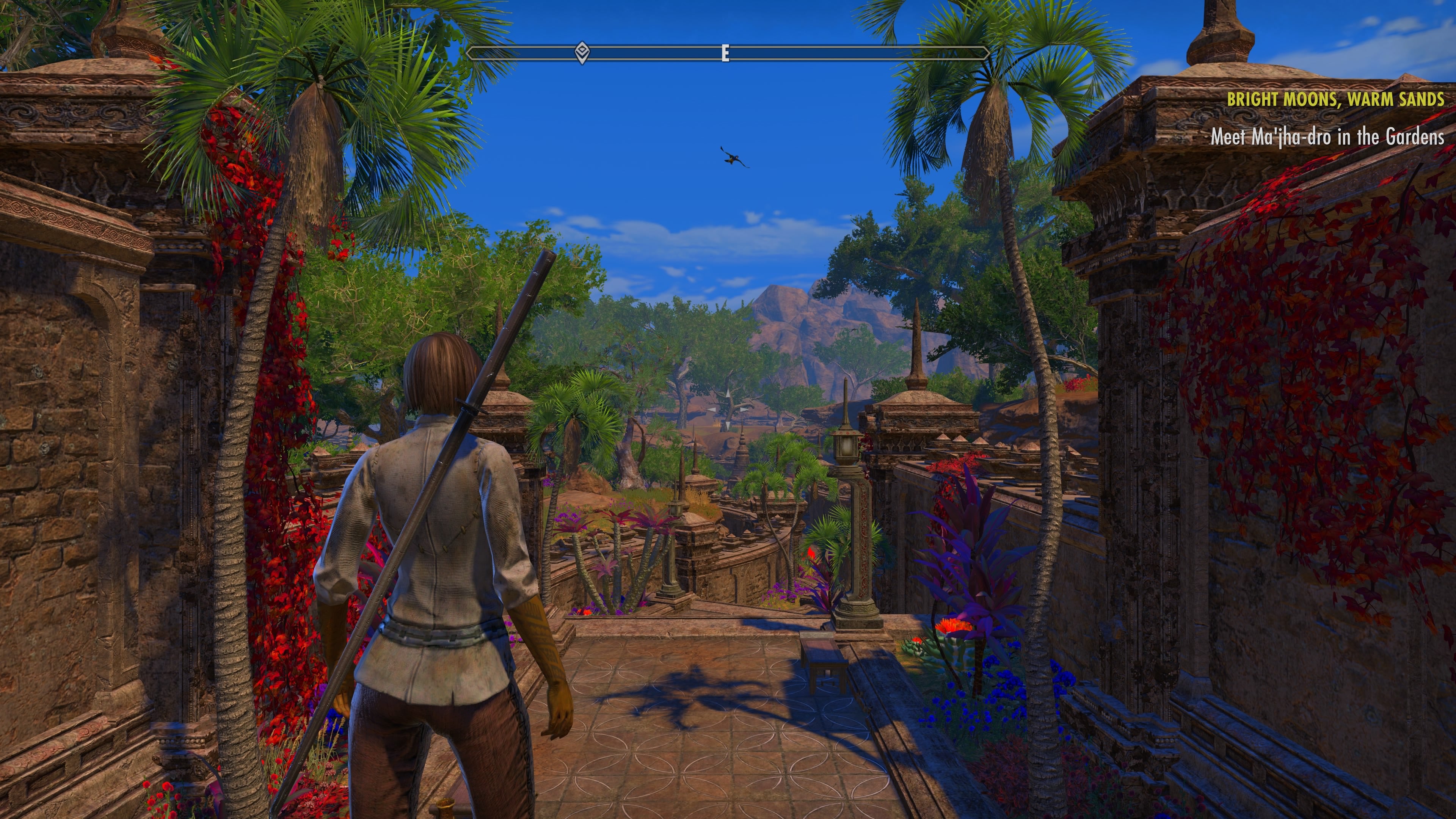 The best thing about this approach is the way that it’s allowed developer Zenimax Online Studios to streamline the onboarding process every year. If Elsweyr is your first time in ESO, then you’ll be given a brand-new tutorial quest, just like in Morrowind or Summerset. Elsweyr swiftly teaches new players the fundamentals of combat and immediately throws them into a fight with a big-arse dragon. (If you already have a character and create a new one in Elsweyr, you’ll begin at level 3 just outside of the tutorial area in Northern Elsweyr.)

Elsweyr wastes no time getting to the stranger, more colourful aspects of Elder Scrolls games. Part of this is just due to the Khajit, who are furry shots of charisma in what can be an otherwise stodgy fantasy world. They’re easily the most fun of the series’ fantasy races, which are mostly the sort of poncy humanoids and unloved orcs that are a staple of fantasy fiction—the Argonian lizard-people are the only other exception. If you imagine a bunch of cats walking, dressing like people, and talking like Antonio Banderas, you have a good idea of what the Khajit bring to the table.

If you need more of an idea, meet Mizzik Thunderboots, a self-styled (and very stylish) private detective you’ll meet in the village of Riverhold. 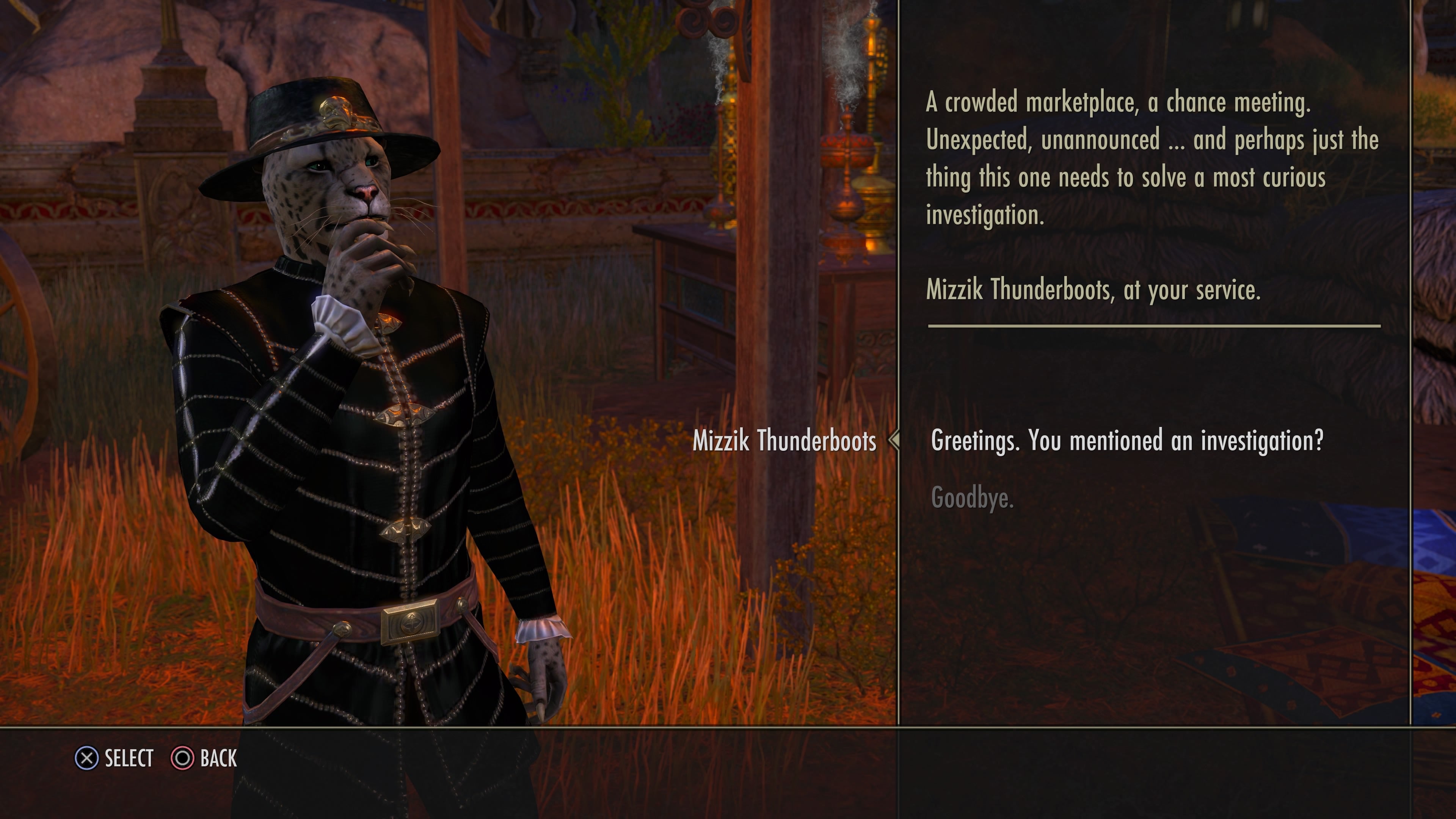 Or this dude, which my girlfriend dubbed a “hookah jungle cat.” 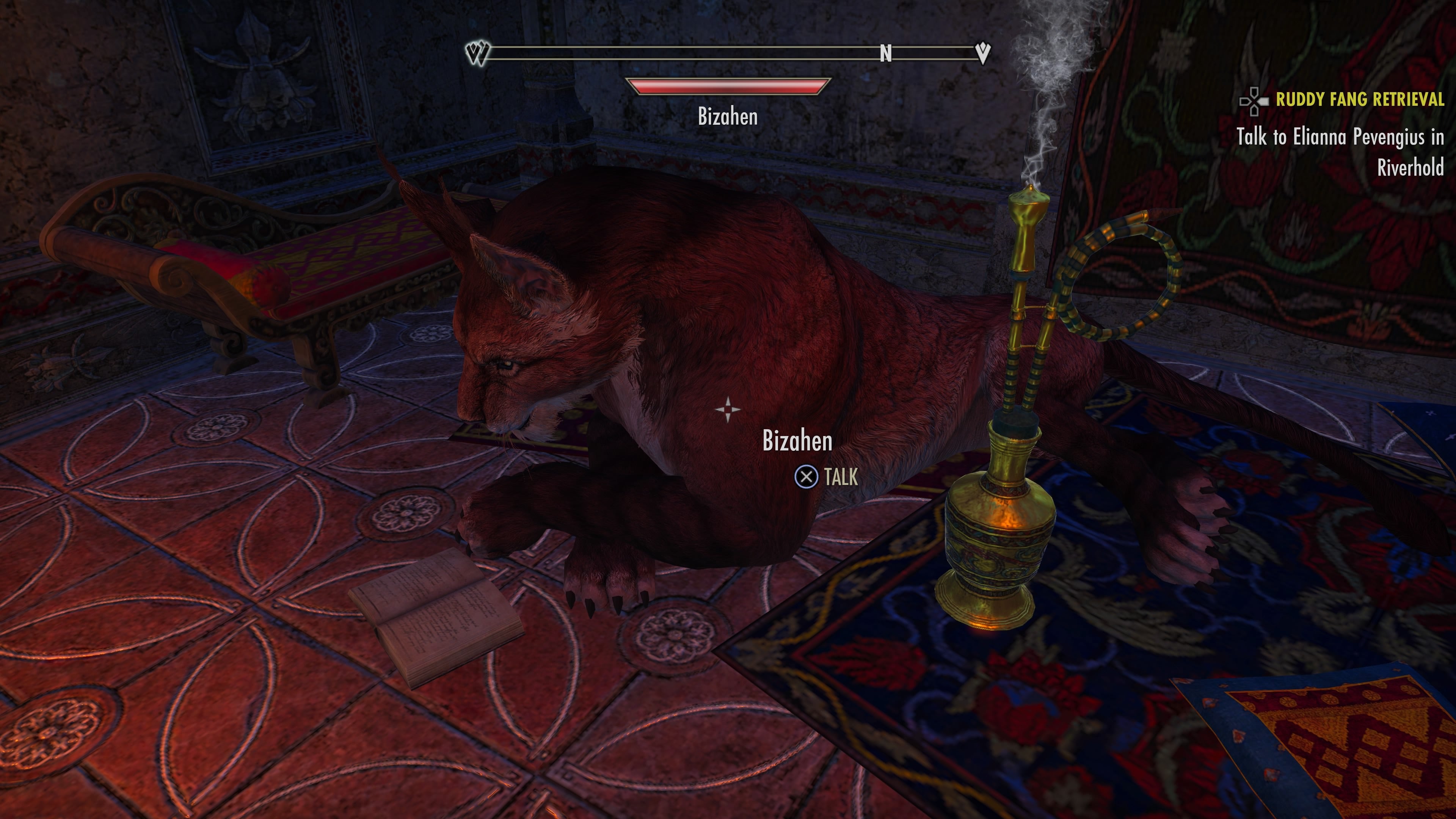 The story in Elseweyr is as narratively tight as ESO has ever been. When you arrive in Elsweyr, you’ll find a notice calling adventurers to Riverhold, a small hamlet in Northern Elsweyr. Once you show up, you get the main quest: An usurper queen has used her power to take over the capital city of Rimmen and, you’ll eventually learn, has been subjecting the Khajit to subtly discriminatory policy. Fantasy species as a stand-in for real-world marginalized groups will never be as good a fit as RPG writers seem to think it is, but considering the limits of storytelling in online RPGs, I appreciate Elsweyr’s gesture at depth.

Then you get the good stuff: undead hordes on the march. A goofy soul shriven named Caldwell who can walk through portals and seems displaced in time. A disembodied head that might also be Caldwell, but evil, somehow. Also, dragons. Chatty dragons. If you wanted to lay out the Elsweyr trifecta, it’s this: cat people, dragons, and necromancy.

There’s also fun to be had with Elsweyr’s side stories and characters, which embrace the weirdness of The Elder Scrolls early on in a way that I appreciate. Agree to help dapper detective Mizzik Thunderboots, for example, and you’ll find yourself in the middle of a missing person case that only gets more and more absurd as you progress. It’s good, bizarre stuff, if you can roll with the goofy theme-park approximation of Elder Scrolls that ESO trades in.

The last part comes courtesy of both the expansions plot and the new Necromancer class, the first new class since Morrowind added the Warden. The Necromancer class brings the total number of playable classes to six. Early on, it’s fine. I’m about eight hours and nine levels into a new Necromancer character, and it feels like a few of the other classes rolled into one, with the added edge of Necromancy being a criminal act—so if you summon a skeleton in the sight of civilians, they’ll report you, and you’ll have a bounty on your head. 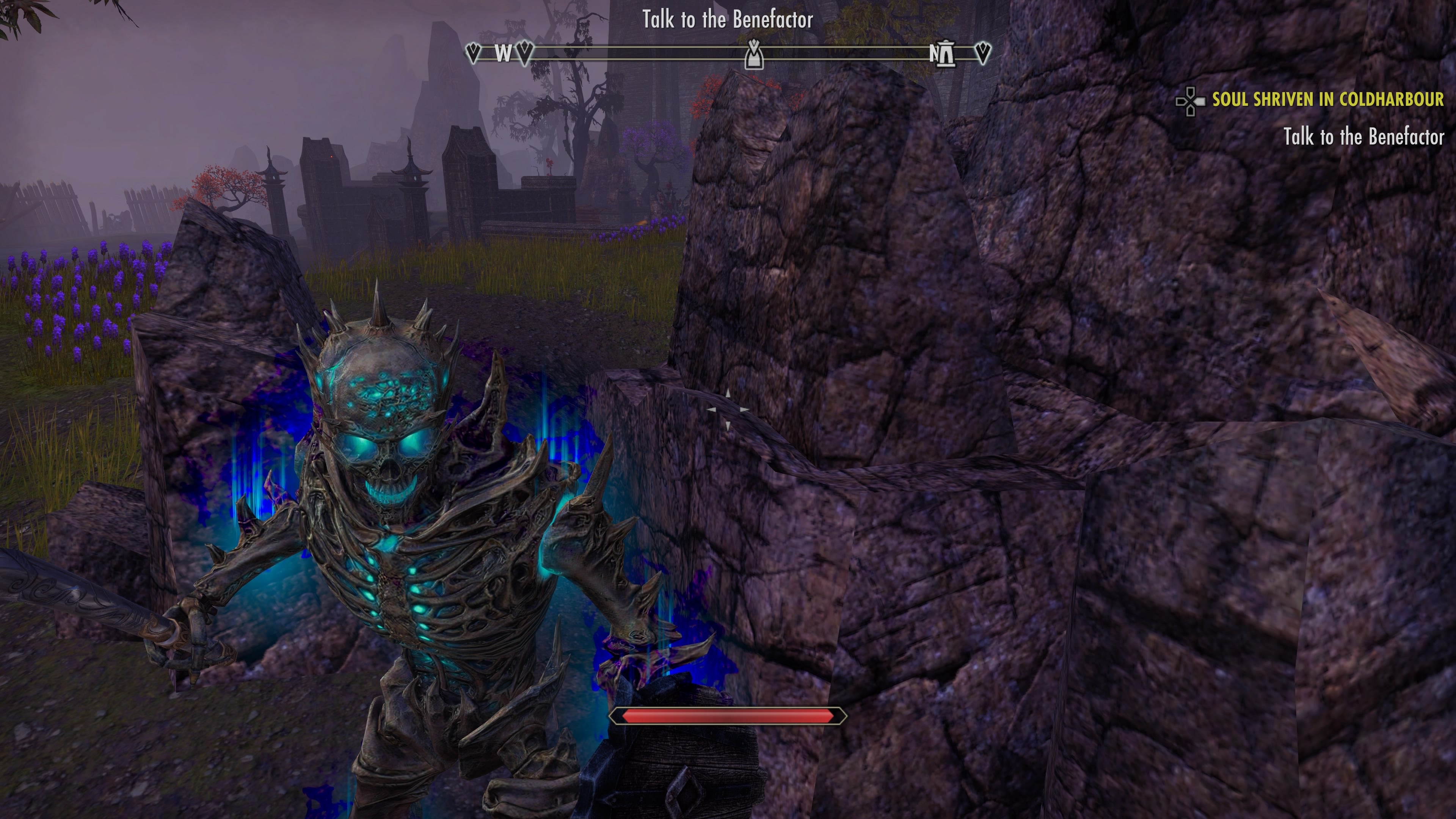 One of the Necromancer’s ultimate abilities lets you turn into this massive bone ghoul.

The Necromancer skill lines are varied enough that you can build a character around any standard party role—tank, healer, or damage—with a few undead quirks to navigate and optimise. I’m a little lukewarm on it, but that’s mostly because I’m lukewarm on combat in ESO in general. I come to these games for story, and putting together a satisfying character build isn’t really compelling until the endgame.

Elsweyr doesn’t fundamentally change ESO, but it does make it much easier to fall into. It is still an online game that takes a series defined by an intimate, solitary experience and asks you to do it again, but in public. For that, it’ll always feel uncomfortably dissonant, even as its pleasures are roughly the same: slipping away into another world that is wholly open to you, where you can explore caverns and temples or just take on a fantasy day job in a guild.

Having fun in ESO is just a matter of acclimation, and Elsweyr is better at that acclimation than any previous iteration of this game. It’s still early goings for me, but I feel more invested in ESO than I have for a long time.