Trials Of Mana Has No Manual, So Here’s How To Play It

The good news: Seiken Densetsu 3, the sequel to Secret of Mana, is finally available outside Japan for the first time, and it’s now called Trials of Mana. The bad news: Collection of Mana, the Switch game that includes Trials, doesn’t have a manual, and Trials is a complicated game. Here’s what you should know before you start.

The other two games in the collection, Secret of Mana and Final Fantasy Adventure, are easier to pick up as you go than Trials of Mana, but you should probably still read their instruction manuals.

Fortunately, since both of those games were released in the West, there are already English-language manuals out there for each. Nintendo has a nice digital version of Secret’s manual online, and there are some fan-scanned versions of Adventure’s instructions too.

As for Trials of Mana, there’s a lot of information out there in the form of FAQs and fan sites, but here are the absolute basics that you should be aware of before you start playing.

The characters you pick will dramatically change the game.

The first thing Trials of Mana asks you to do, before it even starts, is to pick three of its six characters.

The first character you pick will be the main character of the story, which will change some elements of the plot. The other two will be your support characters, and join the party very shortly into the game. You’ll then be able to swap between any of them in battle by pressing the Minus button.

The characters are vastly different, and can evolve along multiple pathways as you play. Duran is a swordfighter, Angela uses offensive magic, Riesz is a spear fighter who can use buffs and debuffs, Charlotte uses healing spells, Kevin is a powerful physical attacker, and Hawkeye is a thief who can learn ninja magic. 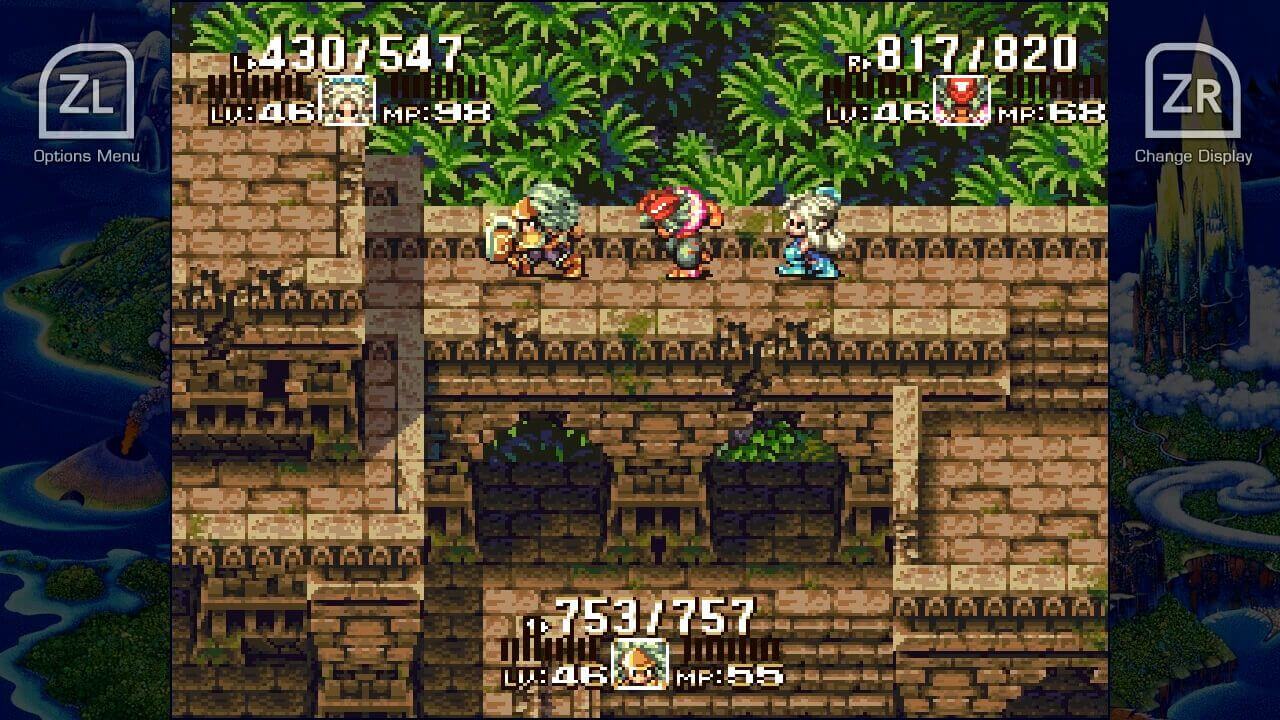 You can play the game with any combination of characters, but some paths will be more difficult than others. For example: If you don’t have Charlotte in your party from the beginning, get ready to have to use a lot of consumable items to heal. If you don’t have a powerful physical attacker, you’d better get used to using lots of buffs and magic.

If you just want a relatively simple party with which to go through the game for the first time, the advice I’ve seen online (and what I’m doing for my first playthrough in a long time) is Kevin, Hawkeye, and Charlotte. This gives you two powerful physical attackers plus healing magic.

Familiarise yourself with the menus.

You can press the X button to bring up the classic Mana “ring menu” around your character. It’ll default to your consumable items. Press Up or Down to go to your character’s magic menu. Press L or R to switch characters.

Unlike Secret of Mana, you can’t do everything in the Ring Menu. Press Y to go into the game’s pause menu, which is divided into nine screens like the side of a Rubik’s cube. Browse around and you’ll get a sense of what the options are. (Yes, this menu was always this laggy on the SNES, too.)

The one you’ll probably use the most is in the upper right, where you can equip new weapons and armour. In here, press the Minus button to swap between characters so you can equip everybody.

Take note of the day-night cycle, and the days of the week.

Trials of Mana has a beautiful day-night cycle, and it’s not just for looks. Different people might be out and about in towns at night, or different businesses might be open.

The game will generally clue you in to this stuff. Monsters will be different at night, too, and if you’re playing as Kevin, he’ll turn into a werewolf at night and his strength will increase. 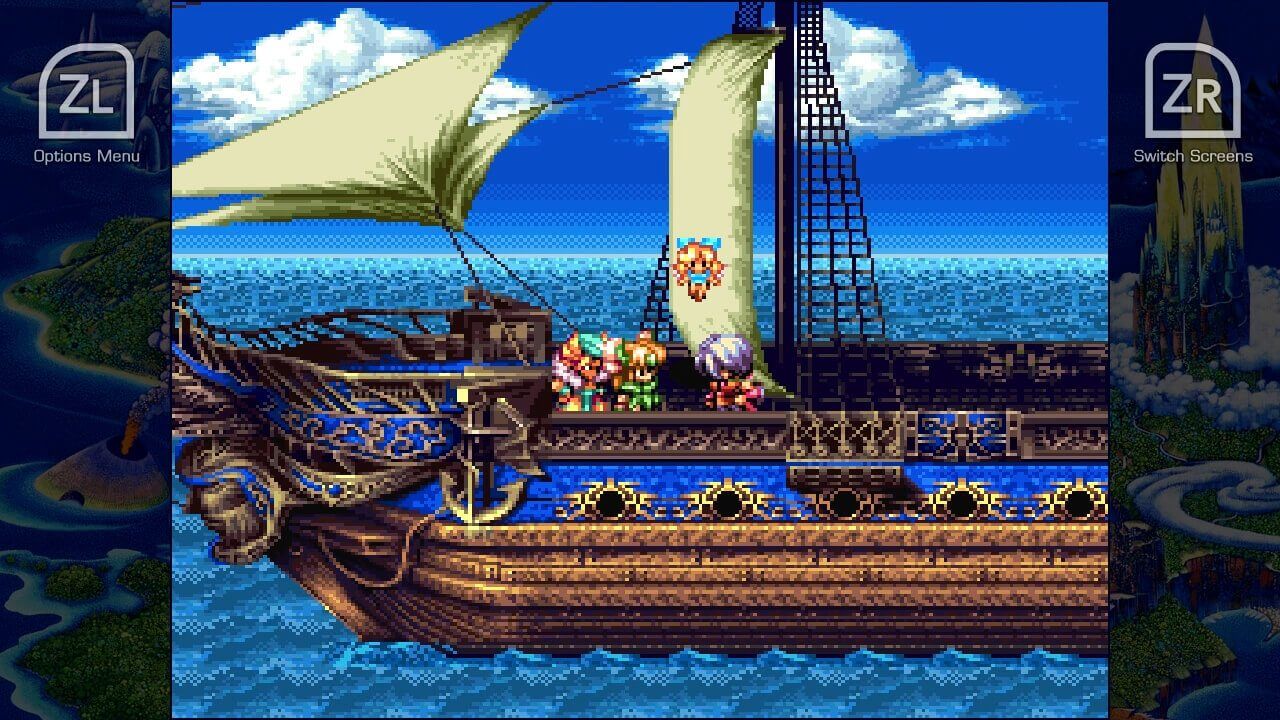 When you stay at an Inn you’ll notice that each time you sleep, the day advances. Each day is associated with a different elemental spirit, and that elemental’s powers are stronger on its day. So if you’re going into battle with an ice monster, waiting for Salamando Day will cause your fire spells to do more damage. You don’t necessarily need to worry about this, but it can be a help!

Plant seeds at the Inn.

In addition to getting a good night’s sleep at Inns in town, you might notice a little empty planter in each one. Check it out and you’ll be able to plant any Seeds that are dropped by enemies, which will immediately blossom into useful items.

When you level up, you’ll be asked to bump up one of six stats: Strength, Dexterity, Stamina, Intelligence, Spirit, or Luck. Definitely don’t increase these equally; instead add points to stats that your characters actually make use of.

Strength is purely for physical attack power, so don’t bother putting any points into this for Charlotte, but build it up for Duran et al. Dexterity will boost the special attacks of Hawkeye the thief, but will do little else. Stamina is important for everyone, since it boosts physical defence and adds to HP.

Intelligence and Spirit boost magic powers and magic defence; these are much more important for spellcasters than fighters. Luck pretty much only comes into play regarding the treasure chests that monsters drop. It may help you avoid being hurt by a booby-trapped chest, or get a better item.

Also, don’t overly worry about doing this “wrong,” since all stats are bumped up to their respective caps whenever you do a class change. 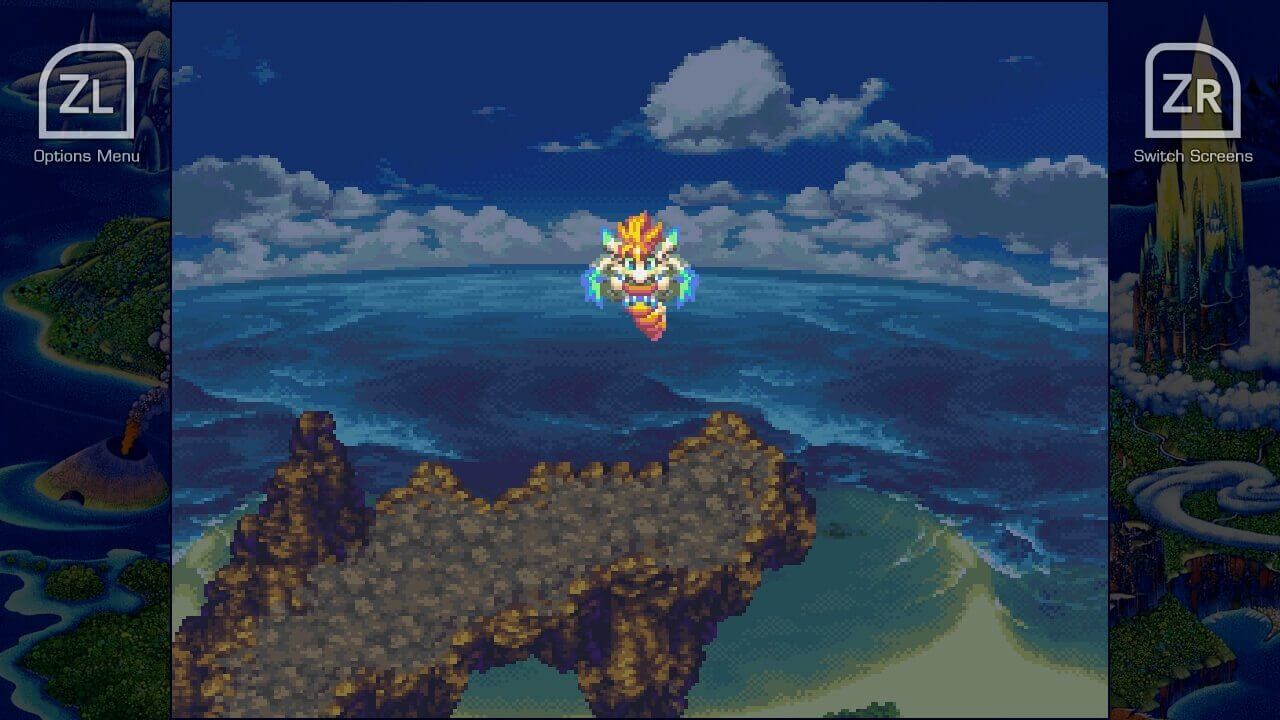 You’ll be asked to pick between two different classes; for instance, the thief Hawkeye can become either a Ranger or a Ninja.

This selection, too, is very important since the character’s powers will change quite a bit depending on what you pick—and there are no takebacks! Read a class guide before you commit – you can beat the game with any combination of classes, but you should know what you’re getting into.

Grind when you can.

In general, Trials of Mana is not a game where you can skate by at a low level on twitch skills and luck. If your levels are too low, enemies will pretty much wreck you while you’re dealing single-digit damage. Take the opportunity to grind when you’re in dungeons and you’ll stay ahead of the game. If you’re right next to a gold Mana Statue, which refills your HP and MP for free and lets you save your game, you’re in a good spot for some risk-free grinding.

You can only hold up to nine of each item in your ring menu. But Trials has a storage option for many more items, and types of item, too. Press the Plus button and you’ll bring up the storage menu, where you can swap things out of your ring menu and put them into storage, and vice versa. 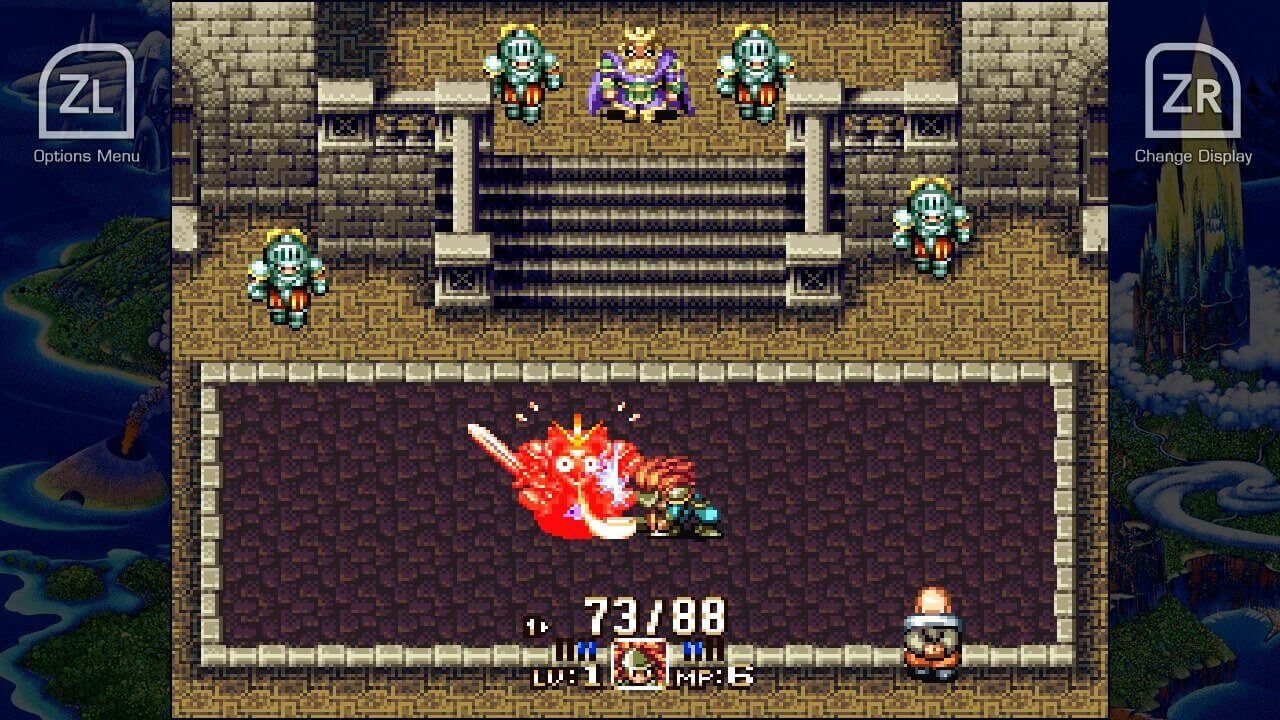 It’s not like Final Fantasy Adventure’s or Secret of Mana’s battle systems, where you have to wait for a meter to fill before you can attack at full power. Just start whackin’ away at everything full blast with the A button.

There will be a power meter that fills up, next to your character’s icon on the bottom of the screen. When that turns yellow, press B to do a special attack that will automatically target the closest enemy. That’s it! You can press Minus to change which character you’re controlling.

In battle, you can open the Ring Menu with X, but you can’t open the pause menu or your item storage. So make sure to fill up your Ring menu periodically so you can access your stuff in battle. When you’re in the Ring Menu, press L and R to swap to your other characters.

Some characters will learn MP-consuming magic and skills as they level up. Make sure to put points into Dexterity for Hawkeye and Intelligence for magic users, because this makes them learn new skills. You can access these by going into the Ring Menu in battle and pressing Up or Down to cycle from items to magic. At first, Charlotte can only cast Heal Light to one party member at a time, but once she does her first class change she can target all allies with it.

Remember, most online FAQs were written for the fan translation.

When Seiken Densetsu 3 was translated by fans nearly 20 years ago, the translated names they came up with were different than the official version. So when you see someone’s FAQ talking about “Carlie,” that’s Charlotte. And a thousand other little differences.

There’s still a lot to learn about Trials of Mana, but this is the stuff you should know before you even begin.

Hopefully Square Enix’s upcoming 3D remake of the game will integrate all of this learning into the game itself, in this woeful era of no manuals.