Void Bastards Is Good But Getting A Bit Repetitive

I fell in love with Void Bastards before I even played a moment of it. The art style just instantly clicked with me in a way that rarely happens. I didn’t even know what kind of game it was until I started playing it earlier this week. It turns out this beautiful and stylish game is like a randomised Bioshock mixed with Rogue Legacy.

The basic gameplay loop in Void Bastards is simple and easy to understand. Players control a space prisoner who is sent out to gather things or complete objectives. To do this players explore a randomly generated map filled with space stations, starships, and other cosmic things and events. Each ship and station you explore is also randomly generated and filled various enemies and loot. My favourite enemy, by the way, are the small ones called juves. They just chase you around and call you a buttface constantly.

Essentially, Void Bastards breaks down into two quests. A larger and longer quest to collect something in the galaxy map and a smaller quest found in each ship to collect a specific part, which can be used to make new gear or weapons. Travelling around the map costs fuel and food. Run out of food and you will starve, run out of fuel and you are stranded. 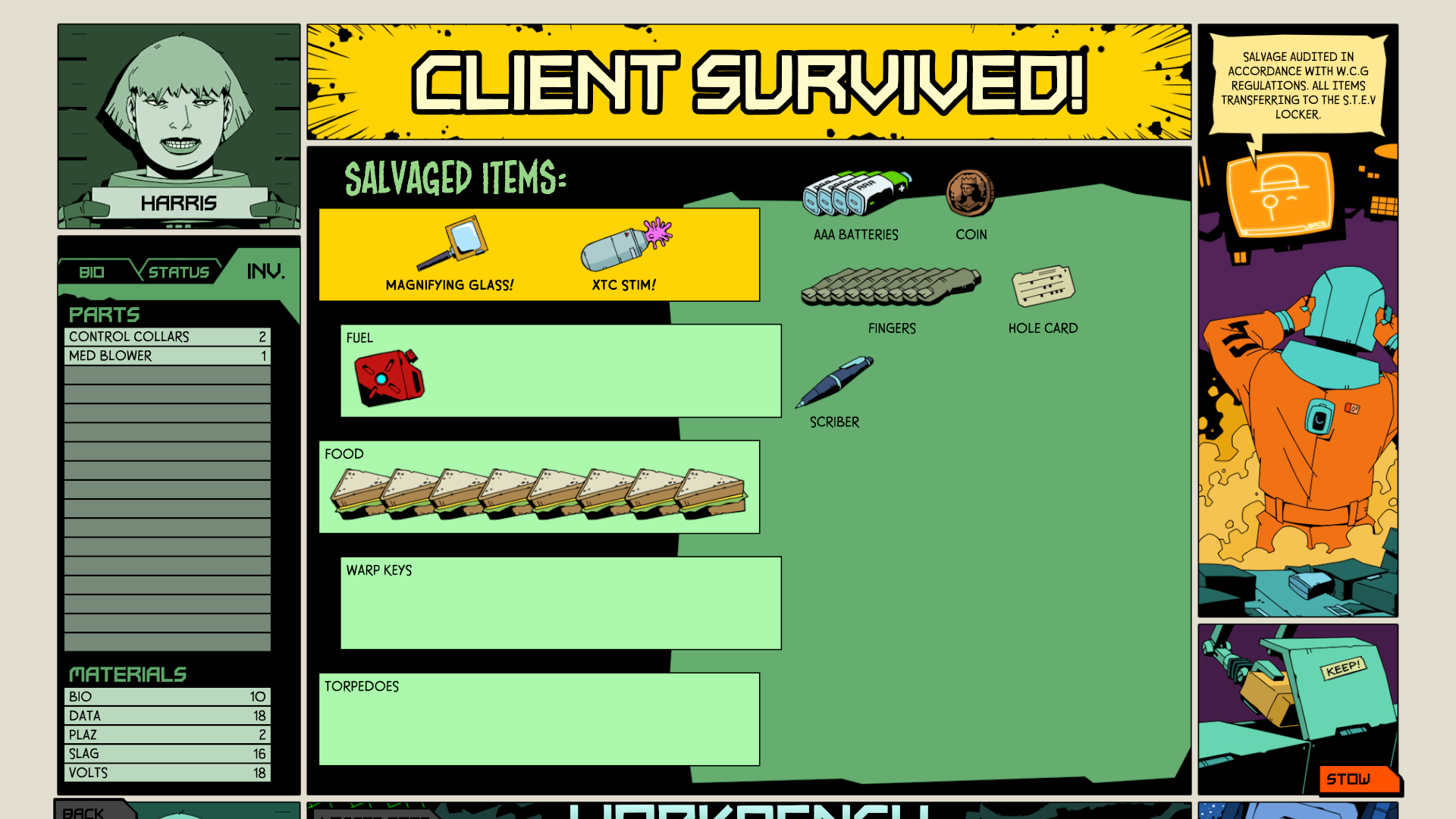 This means you need to stop at ships to get more resources to continue your journey. Once you enter a ship, you can leave whenever you want, but it is usually smarter to first find the specific part that the game has marked before leaving. But these ships can be dangerous places.

For starters, each ship only contains so much oxygen. Every second you explore, your oxygen is ticking down. With smaller ships, this isn’t usually a problem. But bigger and more elaborate vessels become harder to fully explore and with more enemies to dodge and rooms to search, it can become very easy to stop monitoring your oxygen. Then suddenly you might end up in a situation like I was in, where I was surrounded by tough enemies, low on health, nowhere near the exit and almost out of oxygen. Things didn’t end well for me in that scenario.

But like Rogue Legacy and other roguelikes (or whatever the term is, I don’t care.) death is just part of the game. Each time you die, players keep their gear and weapons. But the in-game currency, Merits, are lost as well as food, fuel, and ammo. You respawn, as a new prisoner with some new traits and begin your adventure again from the start of a newly generated star map.

These traits can be helpful, like finding more ammo or being more accurate with weapons. They can also just be silly, like a character calling everyone by their last name.

After a few deaths, I found my desire to push forward diminished. I also found the excitement of exploring ships began to lessen as I started encountering the same ship sections over and over within my first hours of play. As players put more time into the game, I could see this becoming very tedious and boring. 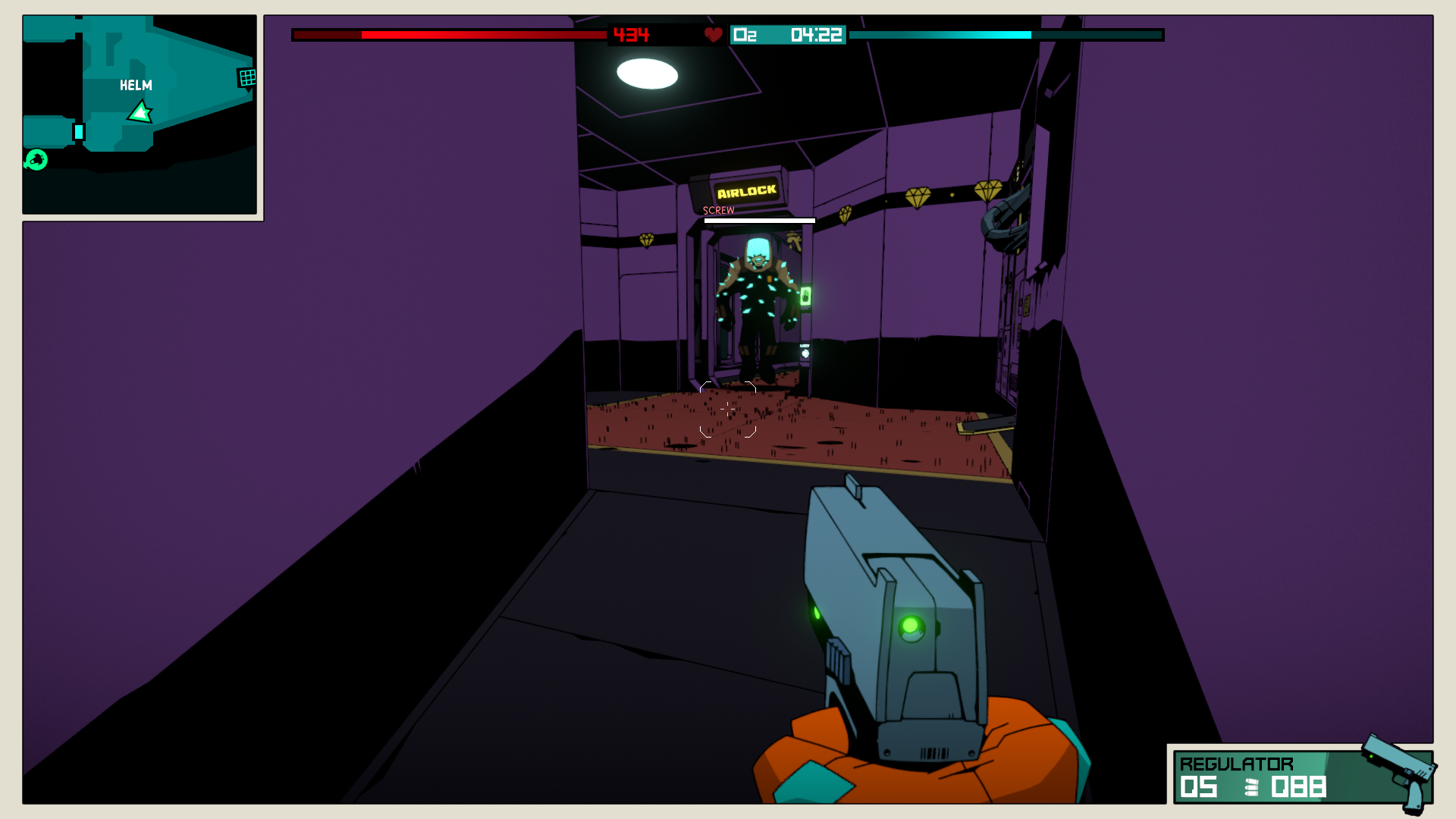 Luckily, the ships are gorgeous, even if you’ve seen them before. Different companies and factions have totally different styles. Some ships are very fancy, while others are dingier and reminded me of something out of the first Alien film.

While exploring these ships, players need to loot containers and deal with baddies. Players have a lot of options to deal with enemies and it heavily reminded me of Bioshock or the new Prey. You can sneak around enemies and use quiet weapons to take out any in-the-way enemies OR you can bring a heavy staple-shooting-shotgun and explosives, going full Rambo style.

If you are chased, you can run away and hide or lock doors to stop enemies from following you.

As I pushed forward, I unlocked new pieces of gear to build, which helped make ships easier to explore. More health, to take more damage. Better boots, which helps stop players from sliding after stepping in oil and other gadgets and gizmos.

All of this gear can be upgraded and all of it stays with you, even if you die. This makes each new character a little easier than the last time you played. 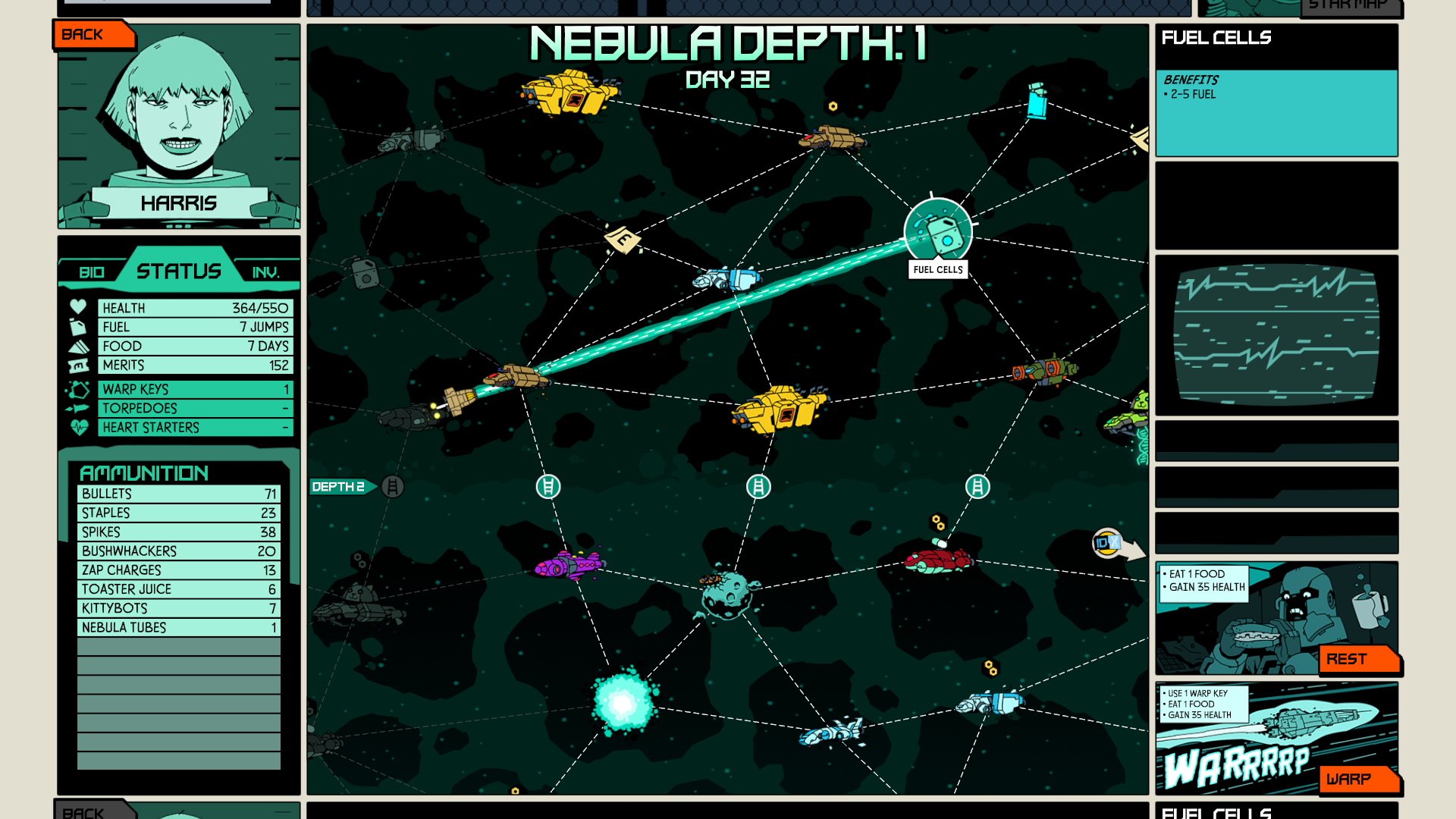 Unfortunately, the randomness of ships and enemy placement can cause some really weird spikes in difficulty and fun. Playing Void Bastards made me miss the handcrafted worlds of Bioshock.

Void Bastards really leans into its comic book art style in some great ways. Enemies make sound effects, which are represented in the world via comic book inspired text pop-ups. Menus all feel ripped out of a digital comic book too. Void Bastards just looks and feels cool in more ways than a lot of other games I’ve played this year.

I want to spend more time with Void Bastards, but I can also feel my excitement for the game starting to dwindle with each death and repeated ship layout. Though I’ll never get tired of the way this game looks, I might get tired of exploring the same rooms soon.