Wit And Charm Are Powerful Weapons In Vampire: The Masquerade Bloodlines 2

While I was playing Vampire: The Masquerade Bloodlines 2’s demo at E3 last week, I was feeling pretty smug about bluffing my way through a problem. Then, the developer holding the controller hit the wrong button, and a fight broke out regardless.

Bloodlines 2 looks like it has a wonderful breadth of experiences to offer the player, and it has a lot of vampire murder power options on top of that. The game isn’t just about picking what kind of powers you want to use, although that is a cool part of it; I picked the power set that allowed my vamp to turn into mist.

Bloodlines 2 is also about deciding the kind of vampire you want to be, personality-wise. Are you a brute, using your powers to get your way, or are you more seductive? Is your word your bond, or are you willing to screw people over to get what you want?

In the mission that the Hardsuit Labs developers showed me at E3, I could run the gamut from being like NoHo Hank in the HBO dramedy Barry—in other words, a total softie – to becoming the ultimate dirtbag.

In the E3 demo mission, one of the factions of vampires in the game needed me to get some data from another vampire called Slugg who was in hiding. The faction gave me ten thousand dollars to exchange for it, though it was also really clear that I could just murder him if bribery didn’t work.

Slugg is a Nosferatu, which is a vampire who has been scarred by their transformation into a creature of the night, and he was also on everyone’s shitlist for generally being a shady guy.

When I met up with Samuel, the contact who could find Slugg and an amusing character who had been turned during the ’80s tech boom, Samuel asked me to let Slugg live and come into the Nosferatu fold for protection. Samuel even said that I could still take the data and deliver it to the faction leader, as long as I didn’t kill Slugg.

I chose to side with Samuel, because, why not? I was still figuring out what kind of vampire I was.

It turned out, up until my vamp accidentally ended up in a shoot-out, I was a vampire who was very respectful of the masquerade, but generally disdainful of hierarchies. Using my misty powers, I was able to traverse buildings and choke out unsuspecting humans. This allowed me to keep to the masquerade, which is the lingo this game uses to refer to the secrecy vampires have about their existence and powers.

There are clearly delineated areas in the game where the masquerade is in play, meaning that vampire authorities will get pretty upset if you flaunt your powers there.

Other areas are blindspots, which are areas where you won’t break the masquerade by using your powers. These are nice spots to grab a snack or try out Thaumaturgy, which is blood magic that makes people vomit blood ’til they pass out. You can also explode them. It’s very fun.

All that sneaking around brought me to Slugg, who ran into the sewers as soon as I spotted him in an underpass. I followed him, getting into a few scrapes with humans I very easily overpowered along the way.

My vamp tracked him to what was very clearly a drug dealer’s house. There was a line of people outside who all had strong traces of delirium in their blood, which I could see, thanks to the emotional resonance system.

“We actually have a few ways to incentivise feeding, besides just the blood,” Rachel Leiker, the lead UI/UX designer on Bloodlines 2 said. “You of course have blood, which fuels your vampire powers, but we also have a secondary resource called resonance, that’s sort of the emotional flavour of the blood.” 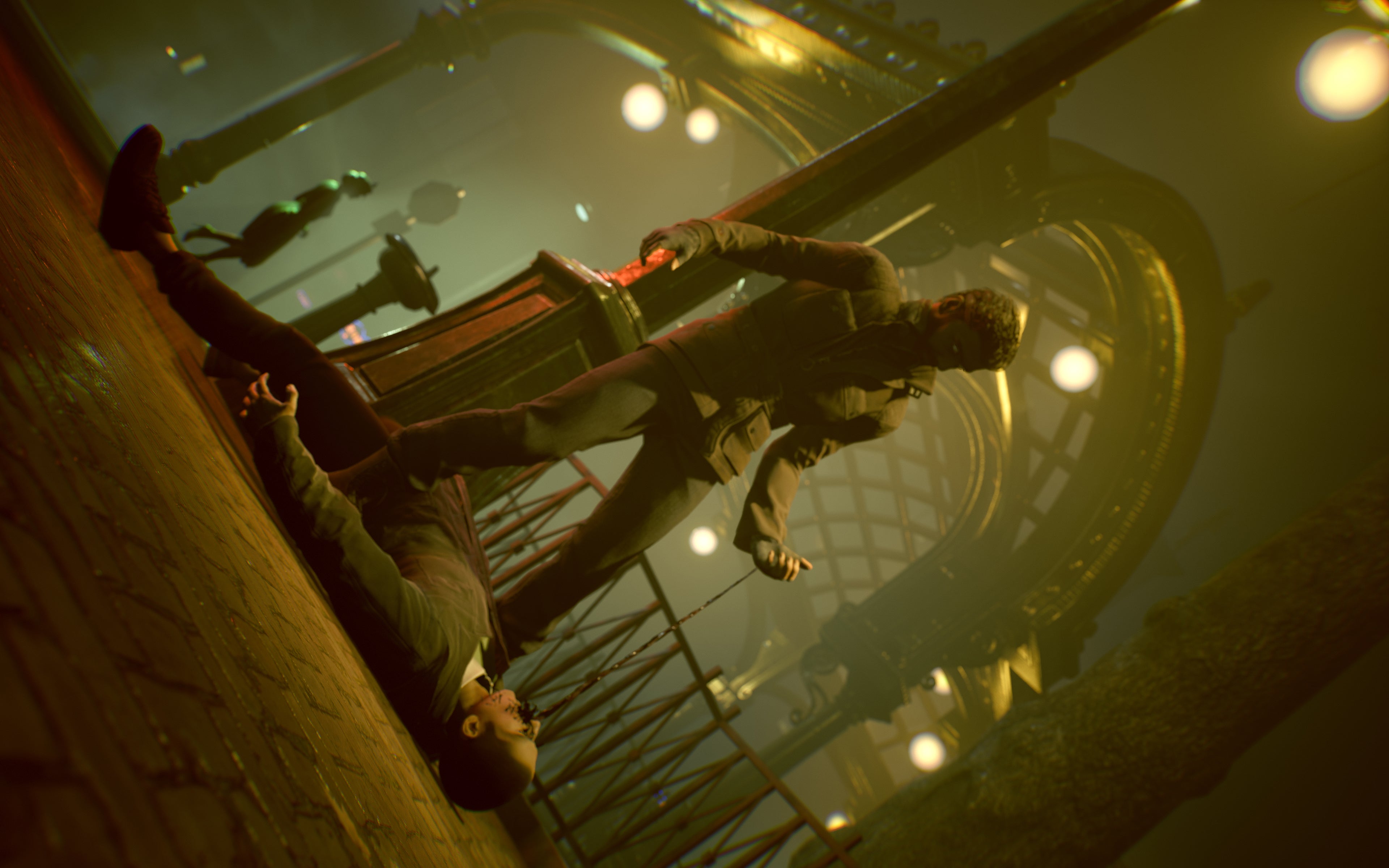 “The difference resonance types are delirium, desire, fear, pain and rage,” she continued. The more you feed on people with a certain type of resonance, the more of that emotion your vamp will feel, which in turn benefits certain actions you can take.

Leiker was vague about these details, saying she couldn’t share too much just yet. “It incentivizes frequent feeding, so even if you have full blood, you can still hunt for a resonance type. It also makes it a little bit more meaningful and strategic as to how you’re feeding.”

If you want to be a friendlier vampire, you can also feed on animals like rats, which Leiker called a “little Capri Sun of blood.”

It was at this dealer’s house that my vamp accidentally stole a whole lot of drugs. Clearly, that upset the dealer and his cohorts, and the guns came out, and we had to kill them all.

That wasn’t my intention. I had already more or less established myself as more of a talker than a fighter, and I was proud of having navigated this conversation with an angry drug dealer without it rising to violence. I had even been able to convince him I was there to see his boss with an offer on pharmaceuticals. They were going to let me through.

Alas, it was not to be, but it was cool to learn that there was basically no way to render the mission unwinnable. Combat is usually an option, but it’s sometimes at odds with the goals of vampire-kind. If you do opt for combat, you can use human weapons, but they’re not necessarily something you can rely on.

The most effective combat choices are going to involve using your vampiric powers, but that has the potential of breaking the masquerade. The other vampires in Seattle might not take too kindly to that, as it puts the entire vampire community at risk.

“Their main aim is to drink blood and continue to drink blood for the rest of eternity,” said Cara Ellison. She’s a writer on the game, as well as a former Kotaku contributor and a friend of mine.

“They really want that low risk, high reward, traverse the city and continue to drink blood until the end of their life. So, a lot of the time, the options are there to strong-arm your way through conversations. It really tries to give you the most amount of options possible.” 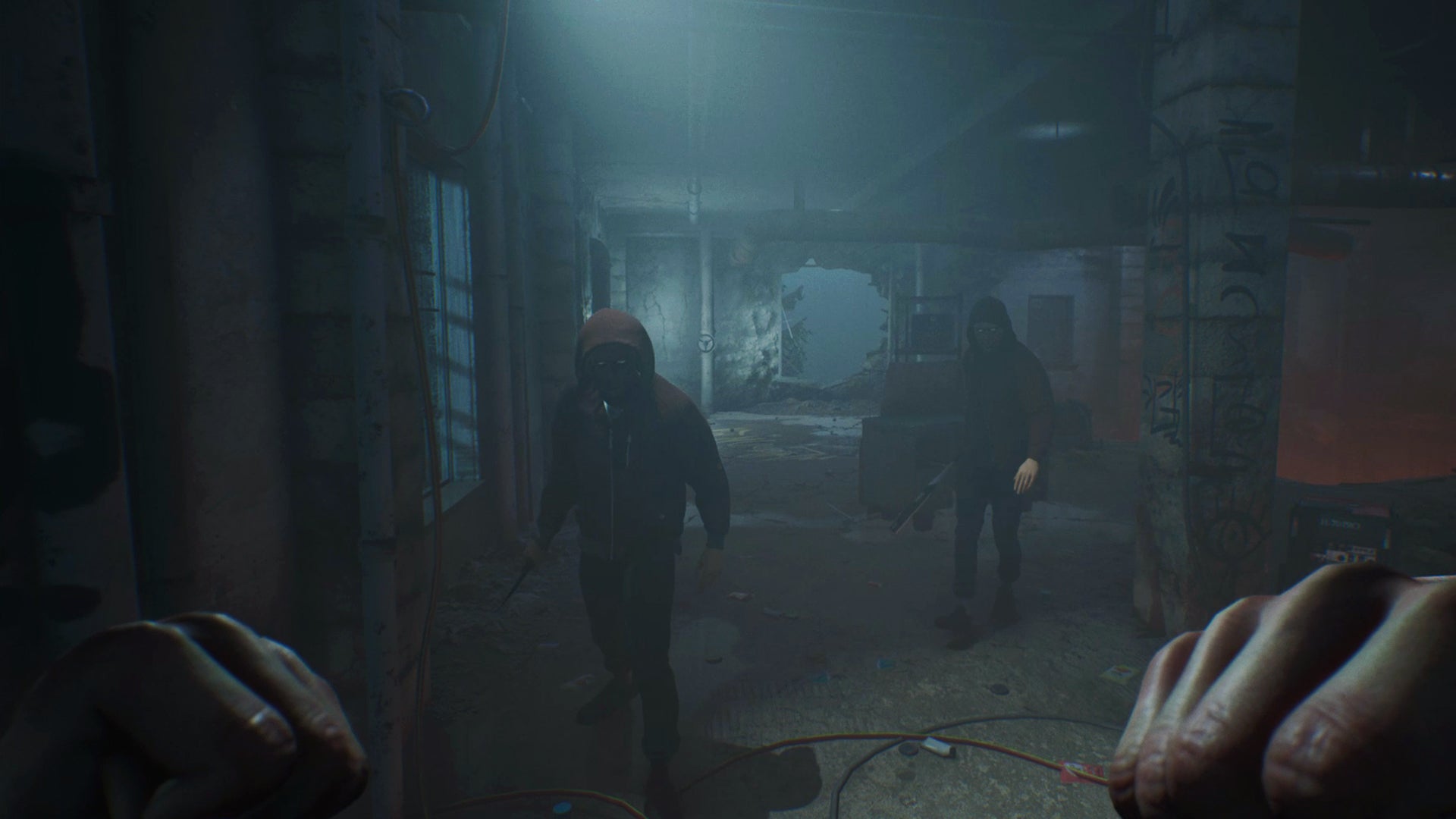 I saw that when we finally caught up with Slugg. He was on the defensive, which was understandable, as we had been chasing him. At first, he was reluctant to join up with the Nosferatu, but we eventually persuaded him to go.

It was at this point that I realised that we had forgotten to get the data from him and would be going back to the faction leader empty-handed, most likely locking my character out of friendly interactions with that faction. Still, we had done a favour for the Nosferatu, and that might come in handy for my vamp later.

“There are multiple ways to finish the quest as well,” Leiker said. “You can go directly into combat. You can negotiate, you can give him the money and he exchanges the data.

You can also threaten him, and he exchanges the data. You can keep the money. There’s also another option where you can be like, ‘Oh, they gave me five thousand to give to you,’ and you can pocket the other five thousand.”

Roleplaying the way I had done ended up putting my vamp into a very specific social situation that would affect the choices they could make later in the game. The Nosferatu would appreciate the favour I had done them, but that other faction would now dislike me.

The way that Bloodlines 2 asks the player to roleplay makes them really examine the social cost of sticking to their guns when it comes to their personal ethics. I personally didn’t want to murder poor old Slugg, and I didn’t even really care about the data that faction wanted. But pursuing the mission the way that I thought was best had social ramifications for my character.

I don’t know what the end result will be of my throwing Slugg a bone, but when Bloodlines 2 comes out in 2020, I’ll get to really figure out what kind of vampire I’ll be, when push comes to shove.