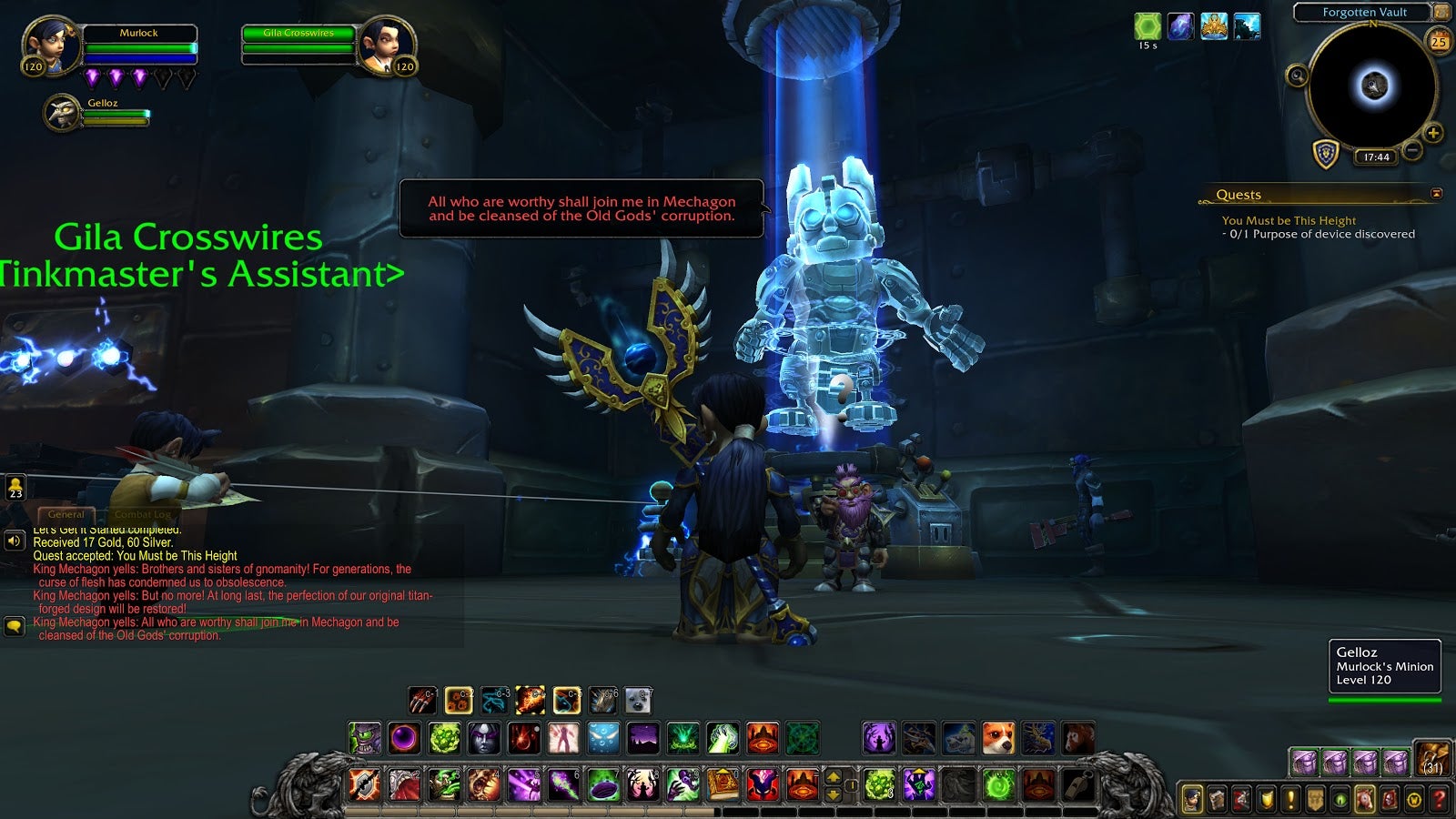 In August I wrote about the Abandoned Junkheap, a small patch of rust-covered, robot-infested land on the island of Kul Tiras in World of Warcraft that had captured my heart. Now there’s the Mechagon Island zone, an entire zone of junk, robots, cybernetic gnomes and joy that was introduced to the game in this week’s Rise of Azshara update. I just like to call it home.

The Rise of Azshara update takes its sweet time getting players to Mechagon Island. First they’ve got to work through an hour’s worth of quests in the update’s naga-riffic Nazjatar zone. Then they’ve got to stop by Sithilus and go on an adventure to get an upgrade for the Heart of Azeroth, the Battle for Azeroth expansion’s power-enhancing gimmick artifact. Only after all that rigamarole is sorted out can players get to the ticking heart of the expansion.

The adventure begins with one final trip to the Abandoned Junkheap. The giant rusted gear door in the back of the area opens, revealing a hidden lab. Inside, players discover the coordinates to Mechagon, the fabled realm of gnome King Mechagon. On the Alliance side, as I couldn’t possibly play through this content as anything but a gnome, I assembled a team of explorers and set off in a fleet of small airships in search of the legendary land.

The mysterious hidden continent of Mechagon Island is right were the in-game map says it is: off the northwest coast of Kul Tiras. Instead of being greeted by King Mechagon, however, they are met by his son, Prince Erazmin. The king has taken his love for technology too far and plans to transform all living beings in Azeroth into mechanical creatures. As the leader of the Rustbolt Resistance, Prince Erazmin recruits players to fight against his father and preserve at least a little bit of living tissue.Maybe a torso and some hair. And yeah, the brain. Sure.

The gnomes of Mechagon Island don’t want to be fully roboticized, but they are incredibly fond of upgrades. Cannot say I blame them. Who wouldn’t want to look this cool? 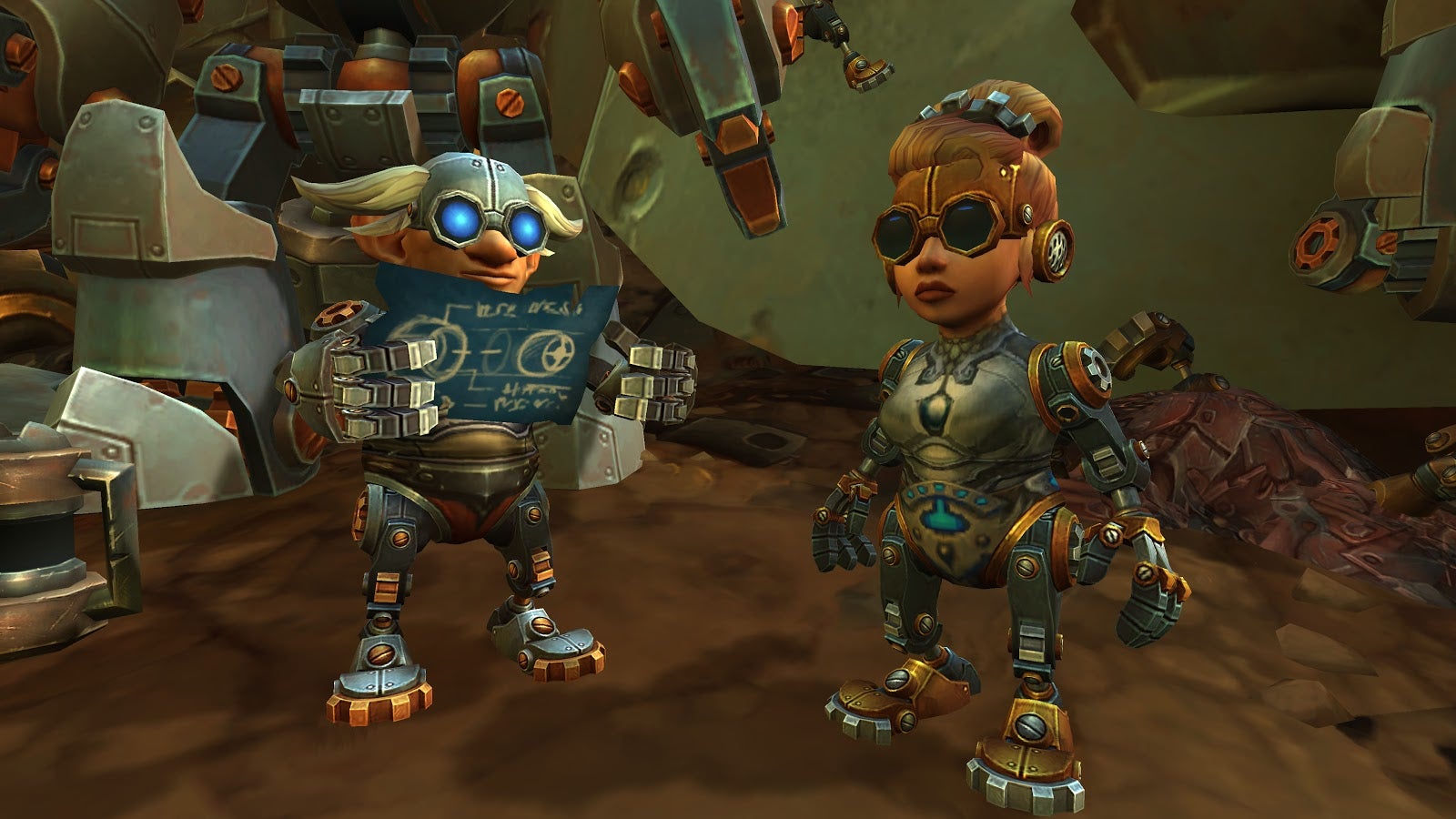 Mechanical upgrades are a theme in the new zone. One of the first quests players receive rewards them with a device called an “Experimental Adventurer Augment.” It’s a trinket that can fit up to three buffs±haste, versatility, stats, and the like±encoded on computer punch cards. The cards can be collected and swapped out. It’s cutting-edge tech.

There is a lot of tech on Mechgon Island. Every creature players fight drops scrap metal used in the new Junkyard Tinkering crafting feature. Killing rare monsters or completing quests unlocks new crafting recipes, which can be given to robotic NPC Pascal-K1N6 to be added to its recipe book. Players can craft special mounts, gizmos, and items used in Mechagon Island-specific quests. It’s a building junk adventure. 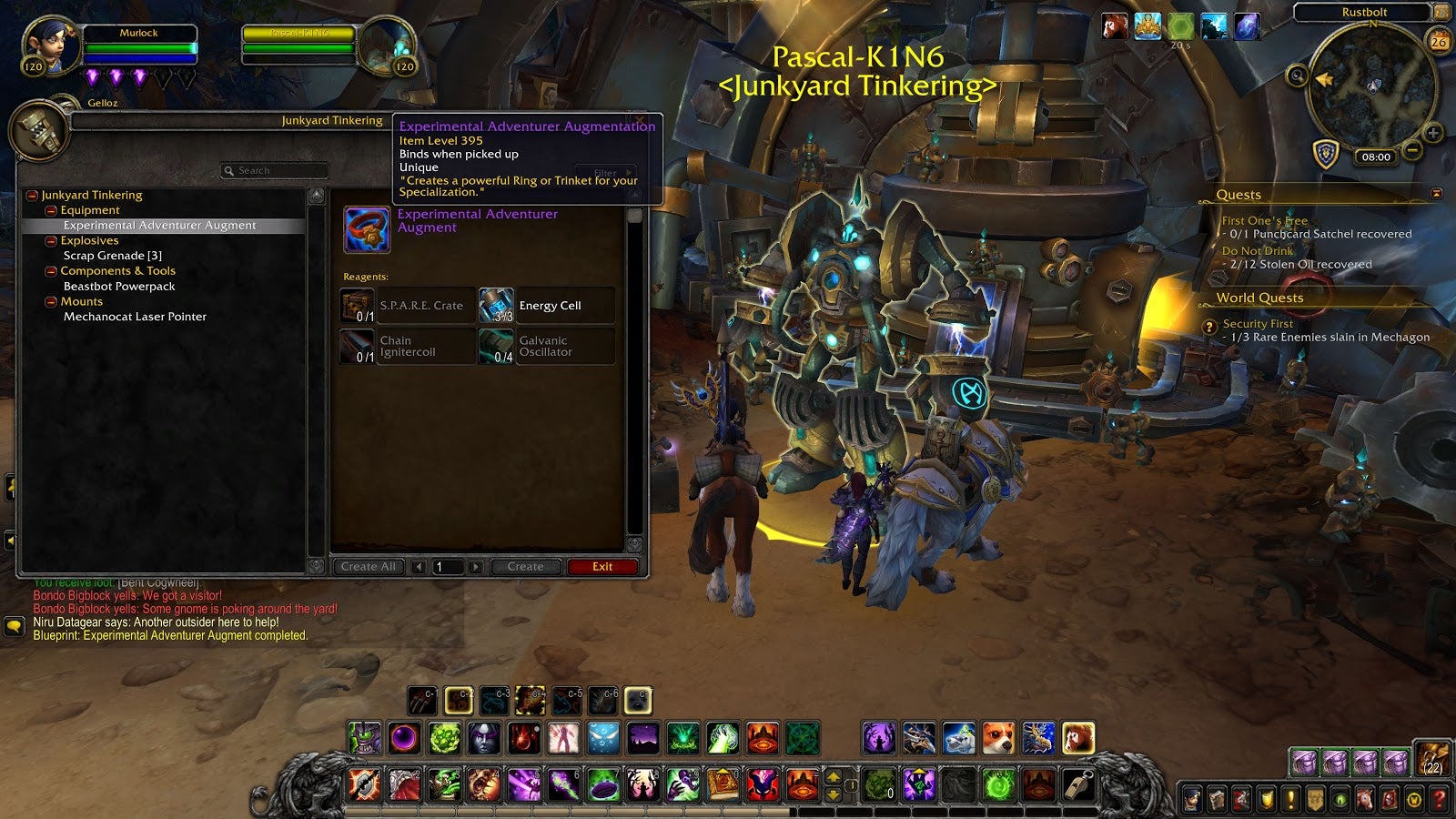 While the ultimate goal on Mechagon Island is to challenge Operation: Mechagon, the new eight-boss dungeon, there’s a lot of daily quests to be done. One character has regular daily tasks that eventually lead to the player earning a spider tank mount.

Another gives the players the ability to create and collect Azeroth Minis, a sort of mechanical action figure completely separate from the game’s existing pet system. I can be a gnome toy collector. It’s all I ever wanted. 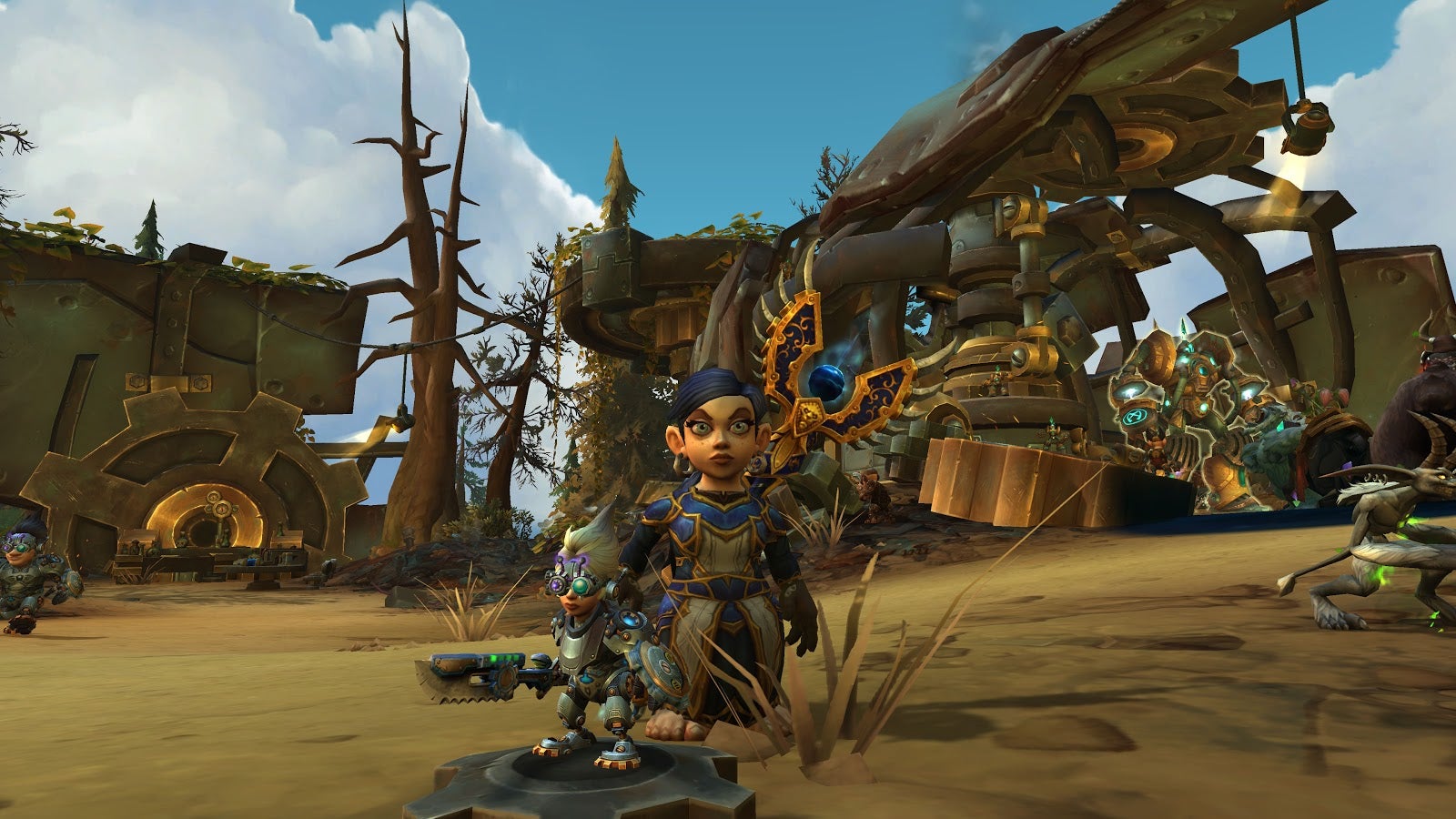 All of this joy and wonder and world quests are set against a gear-strewn backdrop brimming with possibilities. It’s 100 per cent my aesthetic. This is where my gnome warlock lives now in World of Warcraft. She’s never leaving and no one can make her. 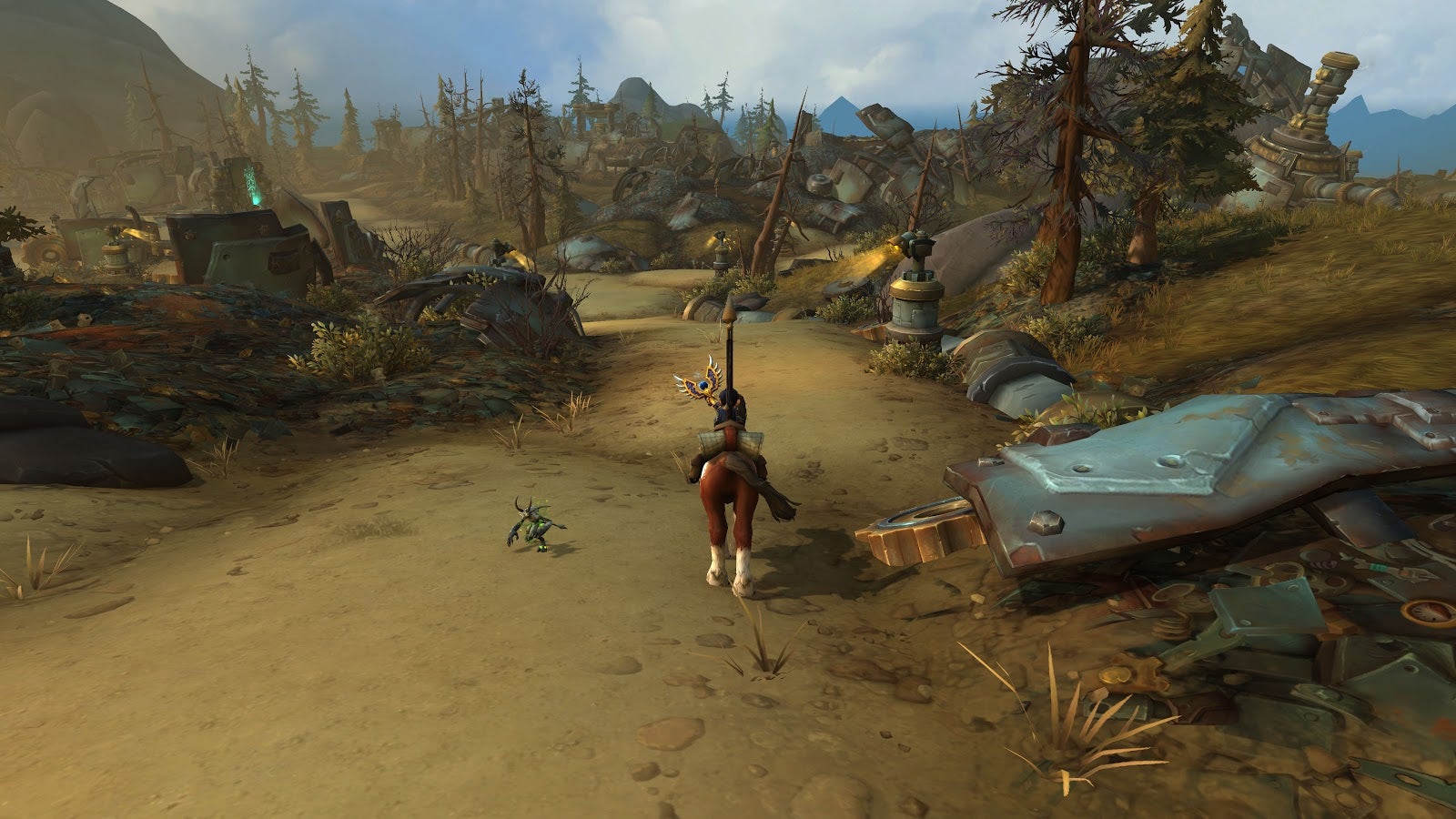