A Game-Changing Look Inside The Next Issue Of Jughead: The Hunger Vs. Vampironica

Archie Horror’s bold crossover between its Jughead werewolf series The Hunger and the Veronica vampire tale Vampironica has already given us a slap-up supernatural war with the Riverdale kids caught in the crossfire. But we have a wild look inside this weeks issue that could change the series — and Archie Comics itself — forever.

Coming from the creative superteam of Frank Tieri, Pat and Tim Kennedy, Joe Eisma, Bob Smith, Ryan Jampole, Matt Herms, and Jack Morelli, Jughead: The Hunger vs. Vampironica has so far seen two alternate horror Riverdales — the one where Jughead Jones occasionally turns into a bloodthirsty lycan and the one where Veronica Lodge is a thrust together.

At the end of their respective series, these Riverdales had seen an all-out war between vampires and werewolves end, but in Jughead’s universe, the werewolves were the victors, while in Ronnie’s… well, you get the picture.

But with them smushed together and the war re-ignited, just what could possibly be behind this horrifying multiversal mashup? Jughead: The Hunger vs. Vampironica #3 will give you the answer, but first, you have to meet its first intriguing new character: perhaps the most powerful woman in either horror universe over at Archie: Jinx, a mysterious young woman from Vampironica‘s Riverdale who, after dabbling in dark magics she doesn’t quite yet understand, could be the key to undoing the damage of fixing not one, but two realities. Check out a preview below! 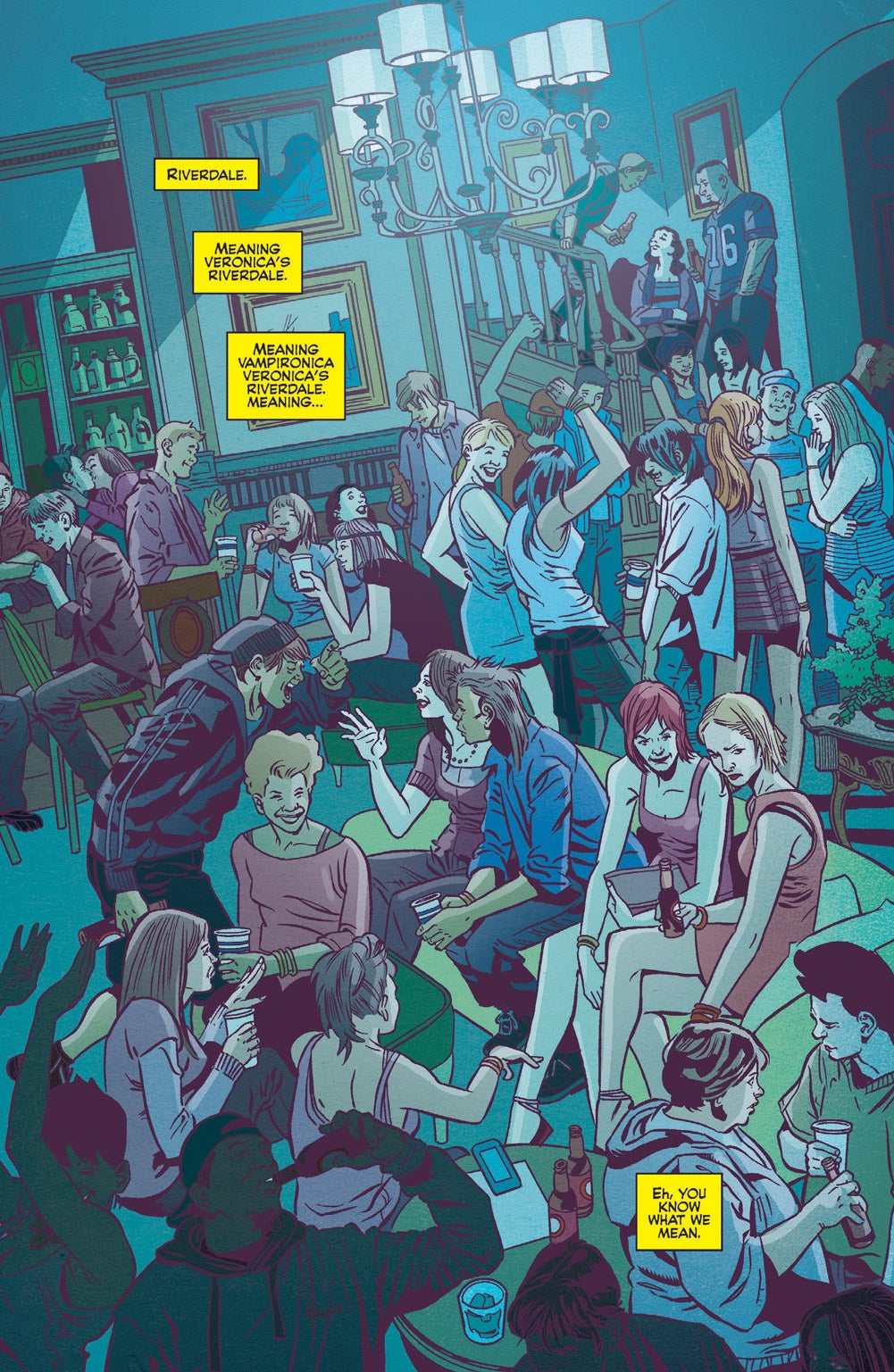 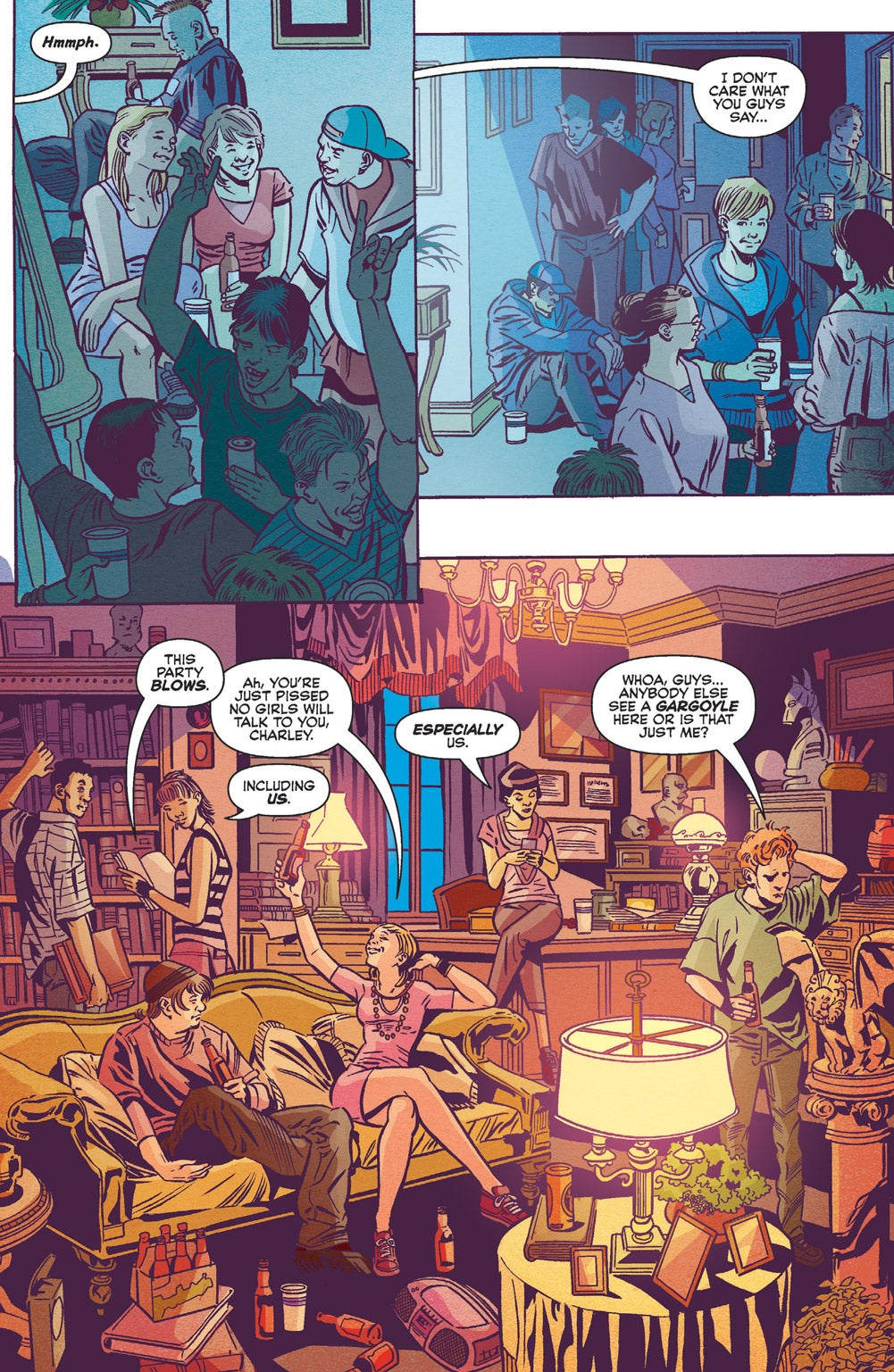 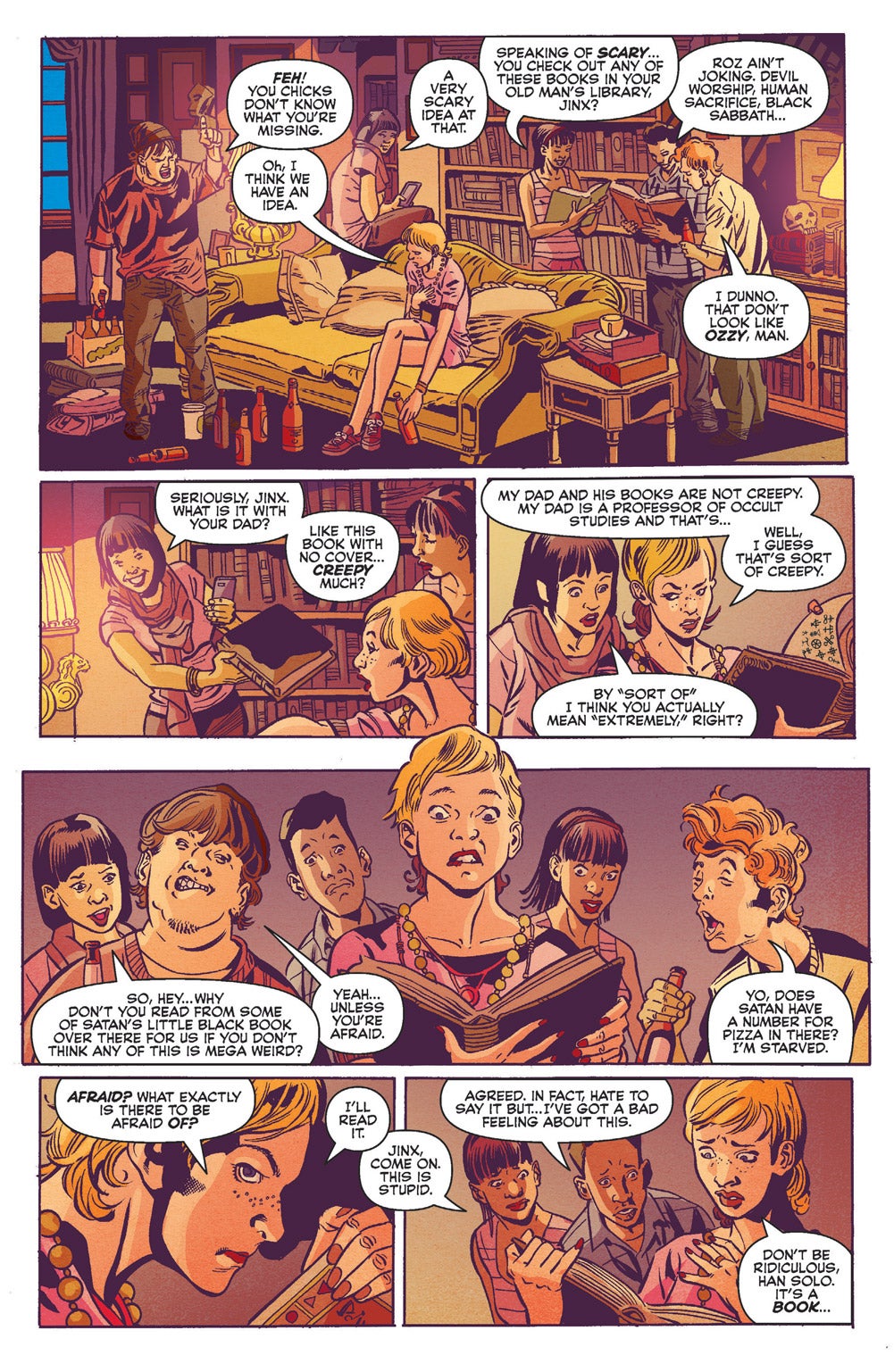 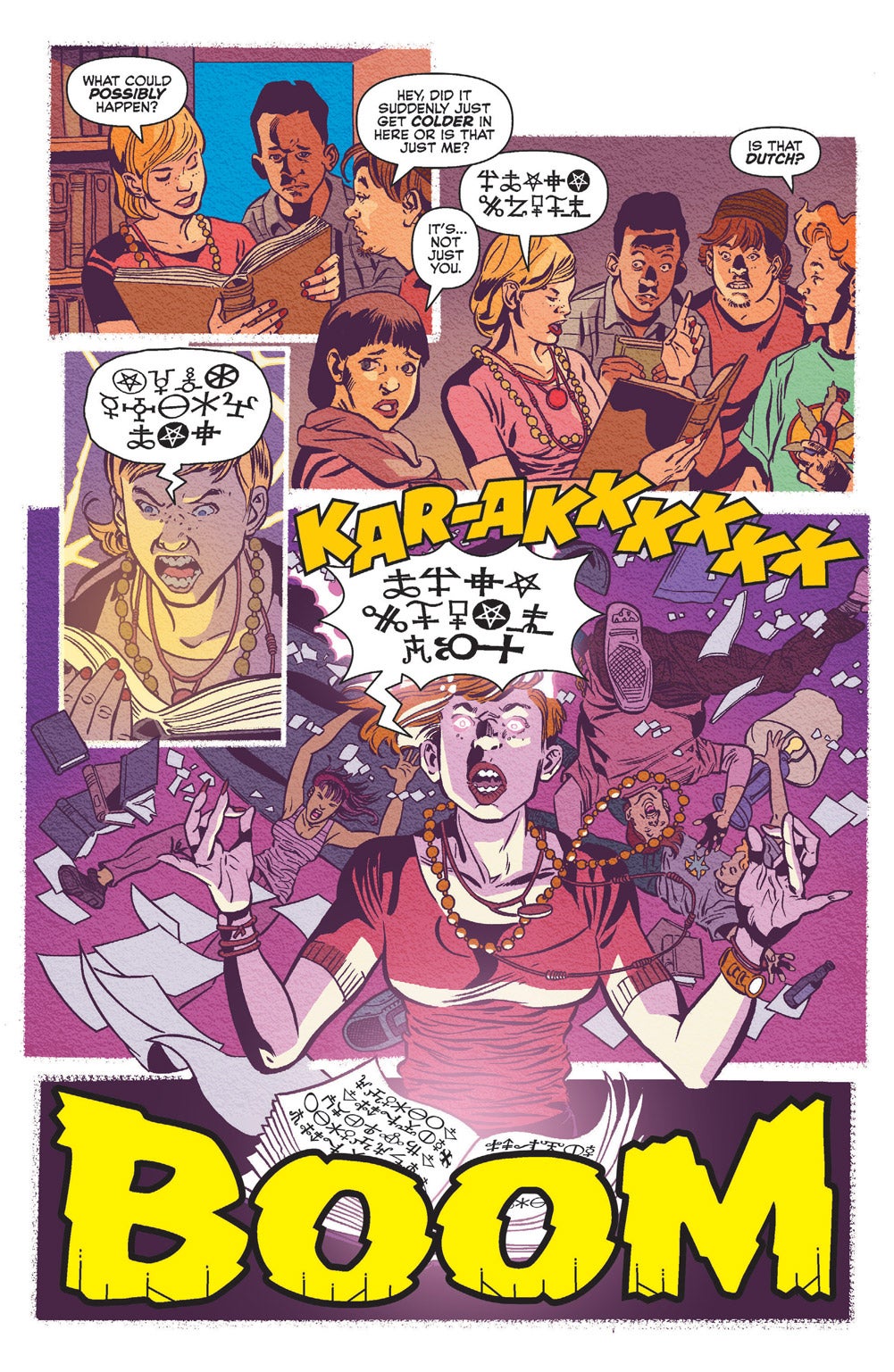 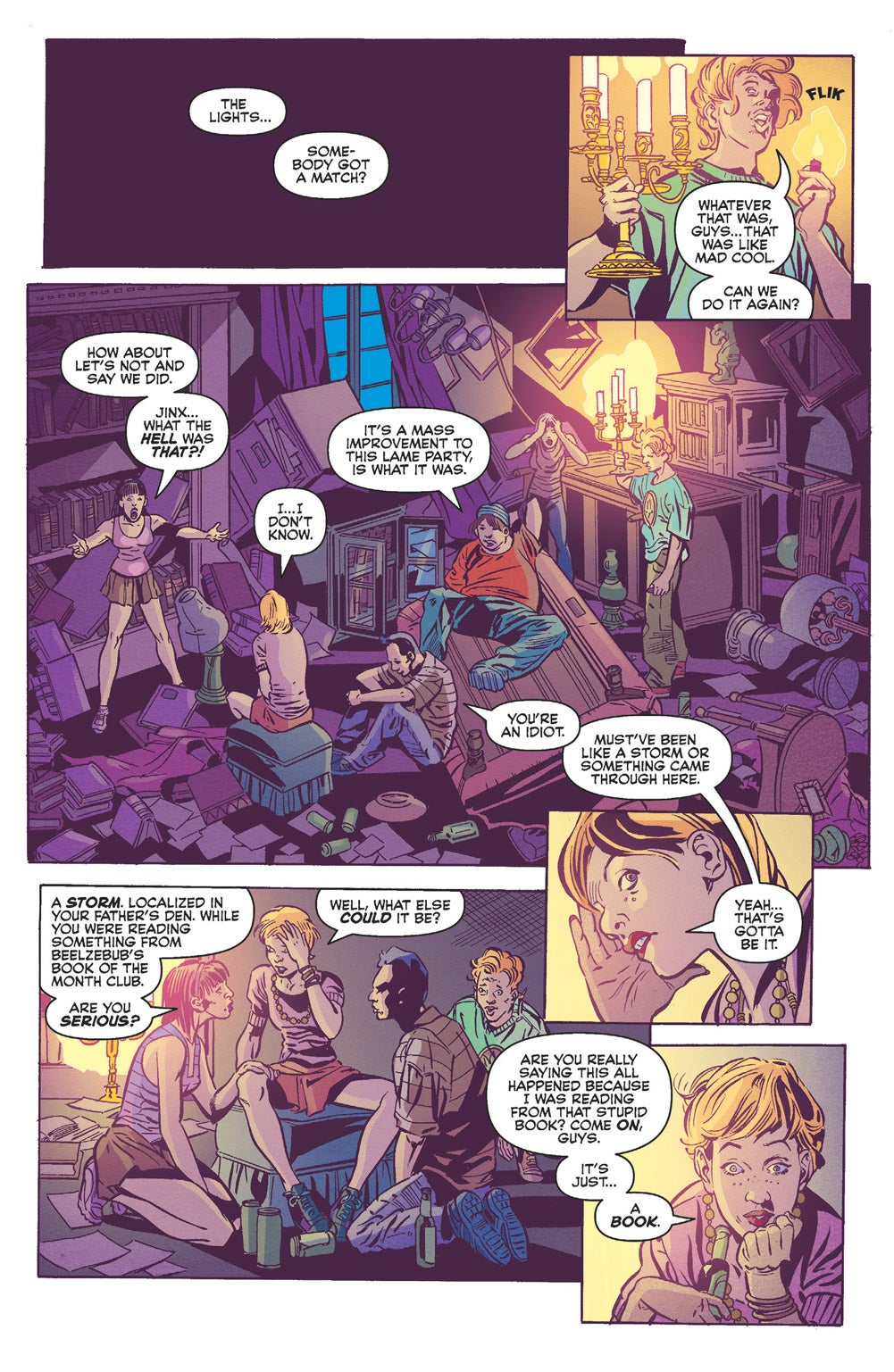 Cool, right? But Jughead: The Hunger vs. Vampironica #3 isn’t done there.

We can exclusively reveal a brand new preview of the final page of the issue, which unveils the real reason behind this mashup of universes… and something that doesn’t just affect Jughead: The Hunger vs. Vampironica, but Archie Comics at large. If you want to save the reveal until this Wednesday, this is your chance to turn back”because there’ll be major spoilers beyond this gallery of variant covers for the issue. 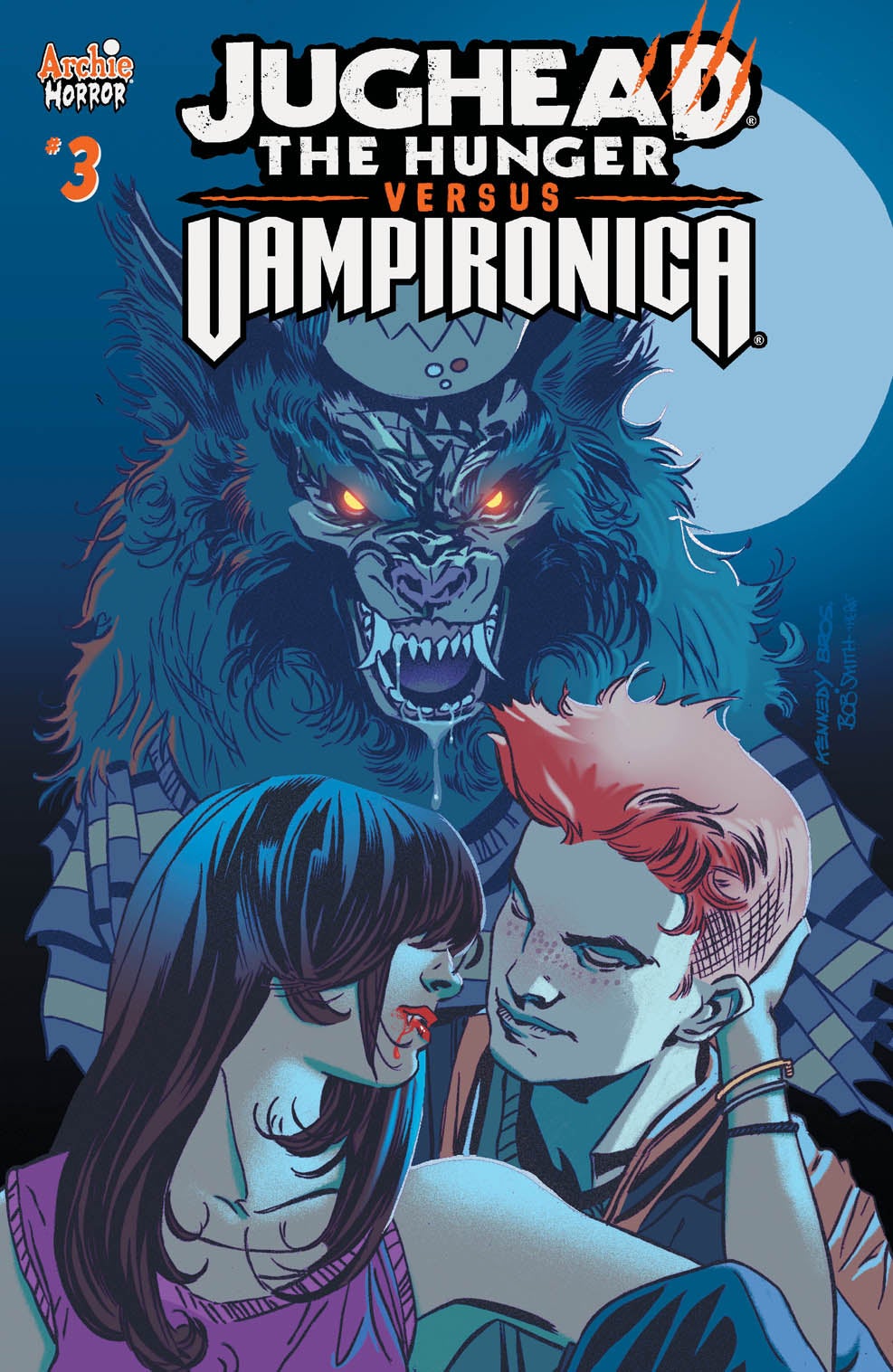 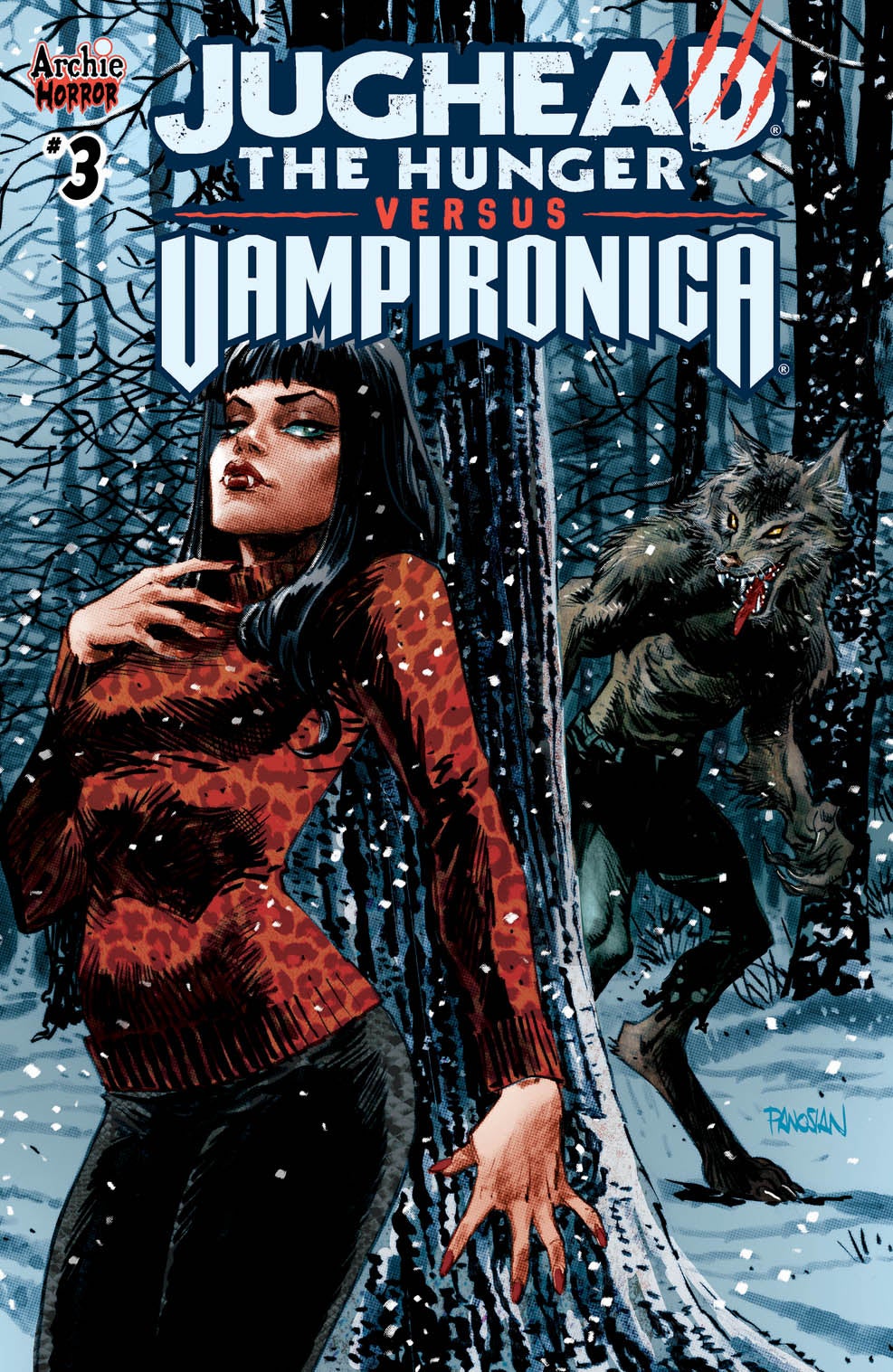 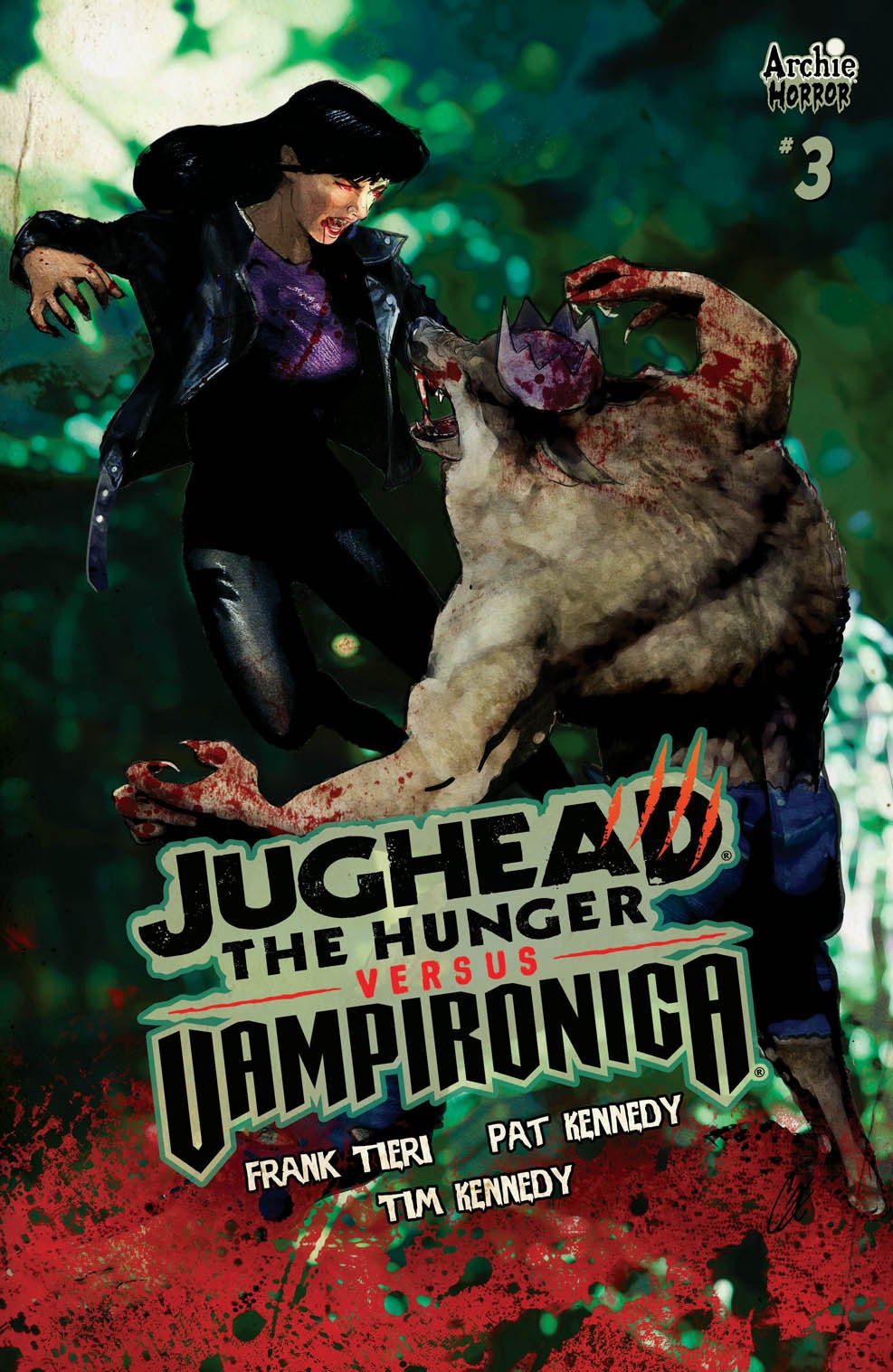 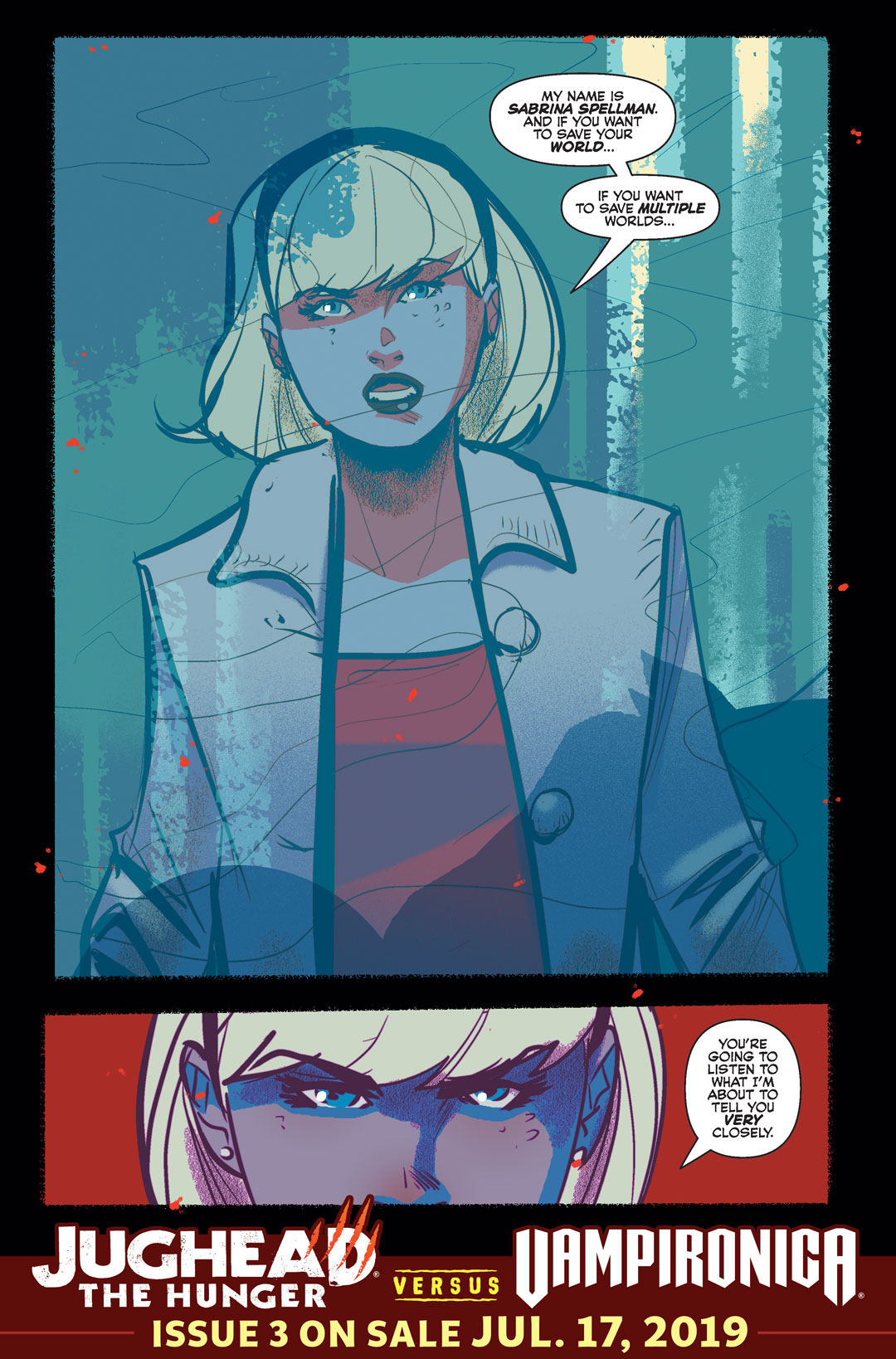 Yes, that is Sabrina Spellman! Sabrina the Teenage Witch, star of her own Archie Comics series, and current paramour of Archie himself in the main Archie book. No ifs, no buts, but the genuine article.

“So, about that last page of JTH Vs Vamp #3… yes, that is indeed Sabrina,” scribe Frank Tieri said in a statement provided to Kotaku. “And yes, this may be the biggest thing we’ve ever done as far as the Archie horrorverse is concerned.”

“With issue four, we delve in deeper and really find out what the significance of the Sabrina reveal actually means,” Tieri continued. “For the purposes of our story, she lets Jughead and Vampironica in on how their universes were affected by Jinx and what they have to do to fix it. But to a larger, more significant effect, she’s introducing them and the reader to the concept of an Archie multiverse… and it’s safe to say Archie Comics will never be the same as a result.”

This is, officially, one of the first hard confirmations that the wild worlds of Archie Horror aren’t just all linked, but are linked to the other Riverdale books the comics publisher releases as part of a vast multiverse, rivalling the likes of DC and Marvel for bonkers comic book gloriousness. Hell, it might even be more bananas than Riverdale itself!

“Which Sabrina, from where — that’s to be revealed, but it does cement something we’ve been teasing for a long time: that there is a wide, sprawling expanse of Archie universes, just a frequency away from each other,” novelist and Archie Comics Co-President Alex Segura added in a statement also provided to Kotaku. “This is more than a fun one-off — this sets the stage for big plans in the Archie universe for a long time. The stakes just got a lot bigger.”

Let’s just hope those stakes aren’t being raised against Vampironica. Jughead: The Hunger vs. Vampironica #3 changes the Archie Comics multiverse forever on July 17.