BioWare hasn’t announced when Anthem’s upcoming Cataclysm event will begin in earnest, but recent clues have players hopeful the game’s next phase is imminent.

It doesn’t take much these days to get Anthem’s remaining players excited. On Tuesday one player discovered a countdown timer in the game that indicated that it was seven days and 17 hours until “The Oncoming Storm.” A community manager for BioWare announced on Twitter that it had gone live early and would be removed. It was a frustrating tease for a live game that’s felt like anything but in the last couple of months.

Dipping back into Anthem recently, I can understand why some players are still combing through the game for signs of something new. I was immediately reminded of just how beautiful and mysterious the sci-fi shooter’s world can be. I’m desperate for a good reason to return to it, even in spite of the game’s lacklustre story and incomplete end game. Scanning the game’s subreddit earlier this week, I found one: a haunting screenshot of a strange object floating in the sky. 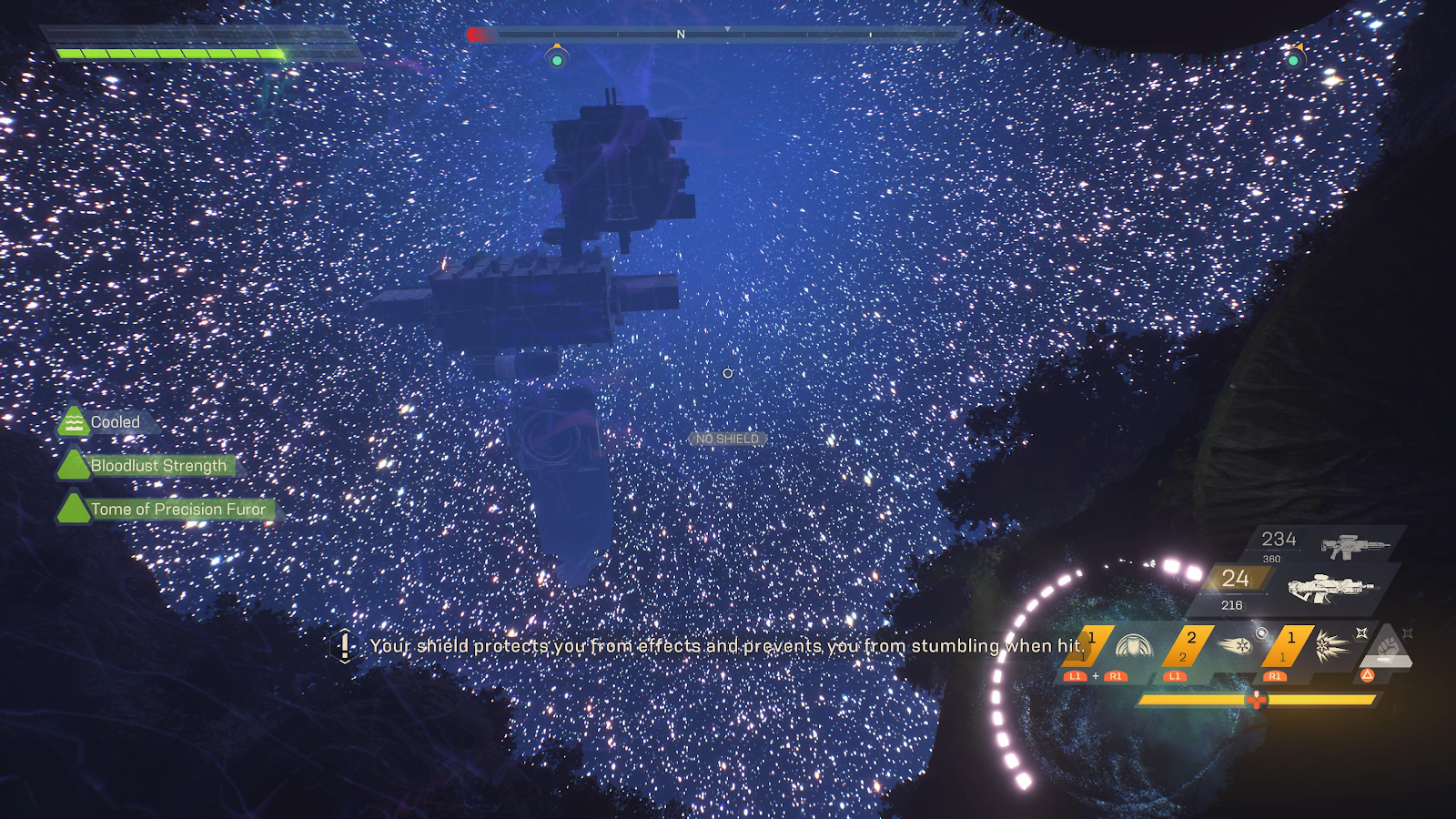 “A space station?” a player named David Bower wrote in his post. “Have I just missed this? I can’t remember seeing this above before.” In the comments readers argued over whether it was a bug and if so what the cause might be. “It looks like an interior loaded into the open world,” wrote one person. “A while back, weren’t there people who found ways to glitch out of strongholds and discovered that the strongholds were in the sky?” speculated another.

Bower said he originally spotted the celestial object while in the northern part of the map during freeplay. “I zoomed way in and it’s three separate things. They don’t appear to be connected,” he said, adding that it took him a long time just to be able to fly far enough to try and see it from a different angle.

I decided to go and see if I could recreate what Bower saw. In an email to Kotaku he shared his exact location in the Great Falls Canyon part of the map where it had appeared. It wasn’t there when I finally showed up, but something else was: a storm raging in the distance. 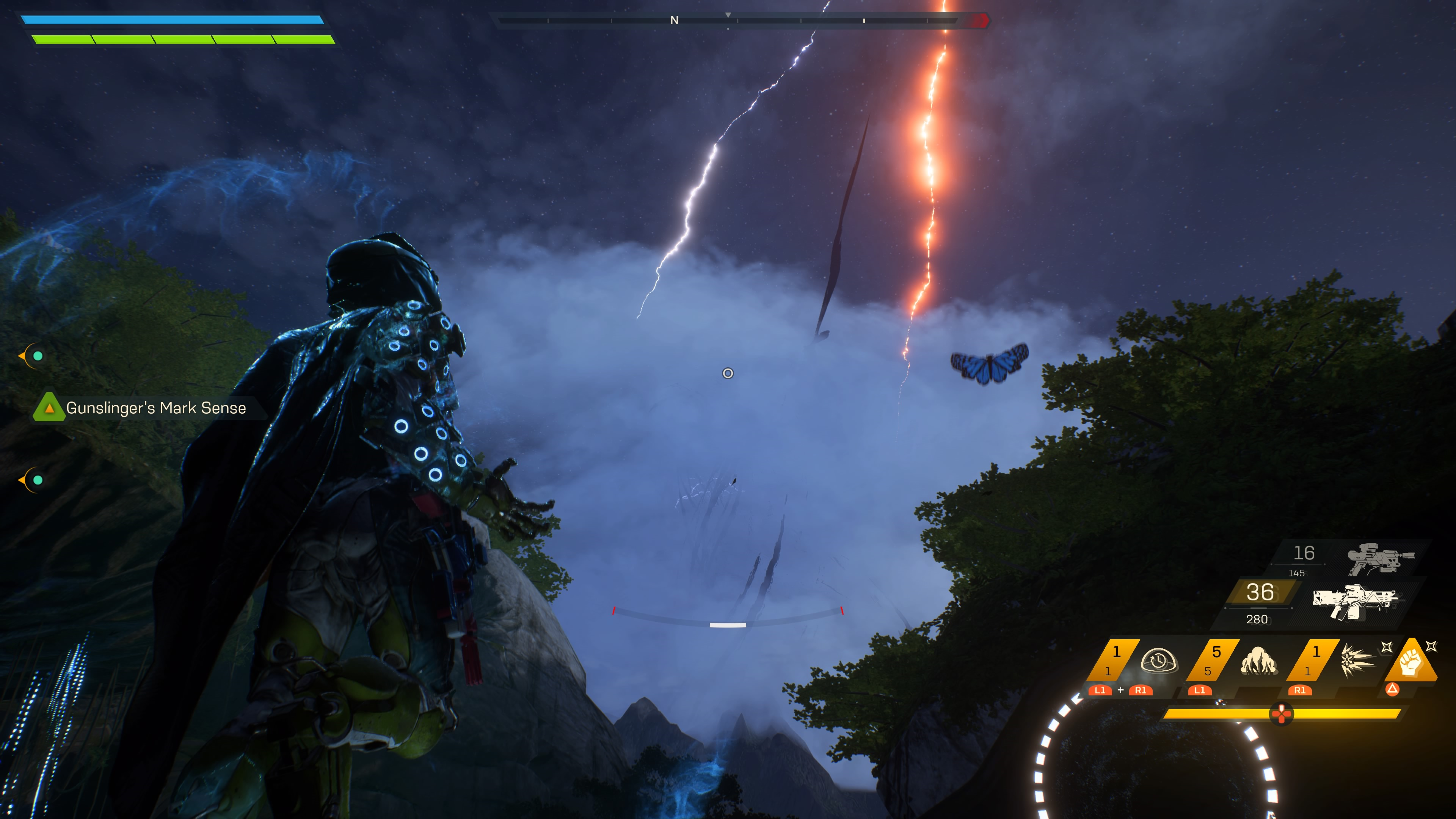 This latest anomaly, a swirl of grey and black pierced by flashes of white and orange lightning, has been visible for everyone. Players started circulating footage of it online late yesterday, and earlier today BioWare executive producer, Mike Darrah, retweeted pictures of it as well. Bower’s mysterious space station may have just been a bug, but it also appeared almost exactly where the new storm is, making it feel in retrospect like an eerie omen. Whether for good or bad remains to be seen.

Anthem’s first Cataclysm event has been raging on the game’s public test server for PC players since June, but this is the first time any sign of it has appeared in the official game.

While BioWare has already shown what the event’s main activity will consist of, the story around it and how it will interact with the rest of the game’s world remain unclear.

Given much of the disappointment surrounding Anthem up to this point, players are understandably hesitant to invest too much in what amounts to a fancy thunderstorm, but for those who have found something to love despite all of the setbacks and delays, it’s a possible sign that the game’s new chapter is finally about to begin.

Even if Cataclysm does turn out to be anticlimactic, it’s better than nothing at all. And after a month and a half without any new content, it can’t come soon enough.