Blazing Chrome Is A Fine Love Letter To 16-Bit Contra 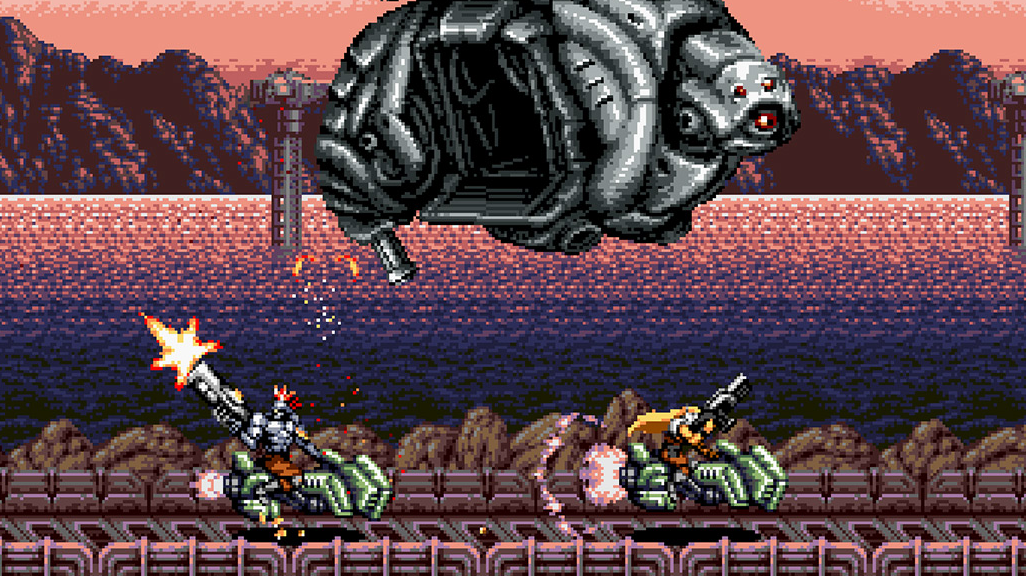 I didn’t know I needed more Contra III in my life until I started playing Blazing Chrome.

The run-and-gun action platformer, out today on PlayStation 4, Xbox One, Switch, and PC, is set against a backdrop of a futuristic world in which humanity has been overrun by an army of evil cyborgs. Blazing Chrome succeeds at recreating the experience of sweatily fumbling for quarters while hunched over an arcade cabinet screen on which a giant number is slowly counting down, taunting you with the knowledge that all your work will be for naught if you don’t pay up quick.

Blazing Chrome does a solid job of honouring the 16-bit action games from which it draws direct inspiration, while providing modern-day players the benefit of making it all look prettier and run more smoothly. Though it’s packaged like the Contra arcade games, with continue screens and arcade cabinet CRT filters for the visuals, Blazing Chrome plays most like 1992’s Contra III: The Alien Wars on the SNES.

You navigate a handful of stages blowing up enemies and dodging their attacks, each of which ends in a beautifully-animated boss fight where the environment itself can be just as deadly as whatever’s chasing you down. 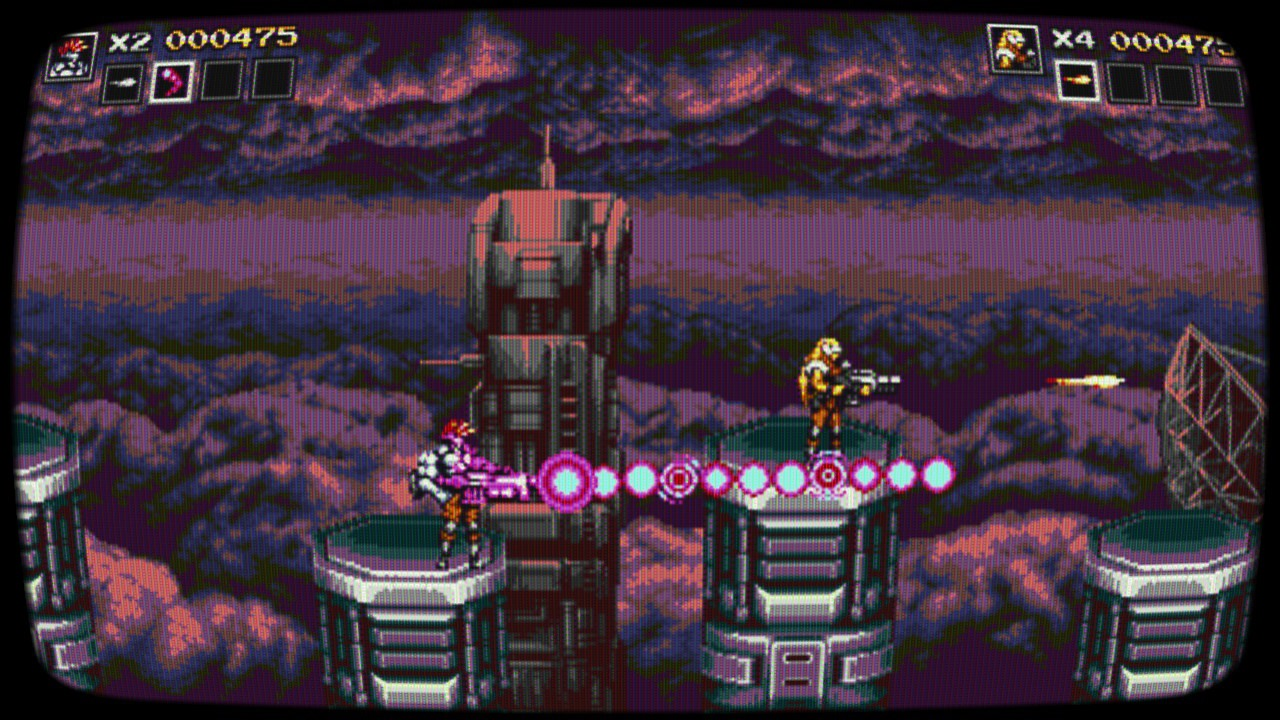 You’re stuck with a limited number of lives at the start of each level, but there’s also generous checkpointing and lots of extra lives on the easier difficulties for those who want to ease into the experience. Beating the game on normal then unlocks a harder difficulty that gets back down to the brass tacks of the early Contra games, with all of the dying and restarts you’d expect from something you rented at a Blockbuster in the 1990s.

Instead of swapping between two weapons, you can collect up to four, my favourite of which remains the grenade launcher, which spills out death in wonderfully satisfying arcs of destruction. There’s also speed, defence, and attack power-ups, as well as mechs you can pilot and vehicles you can drive. The whole game only takes between one and two hours to complete, but there’s also an option to play levels in reverse, and speedrunning, spurred on by leaderboards, is heavily encouraged.

Though Blazing Chrome is a much more detailed and graphically complex game than Contra III, it does lack some of the visual variety. The levels look pretty as they flash by but outside of the boss fights, no part of them is exceptionally memorable. As fun as it is to play, there aren’t many ideas of the game’s own on display. But then, it never really pretended to any of that. 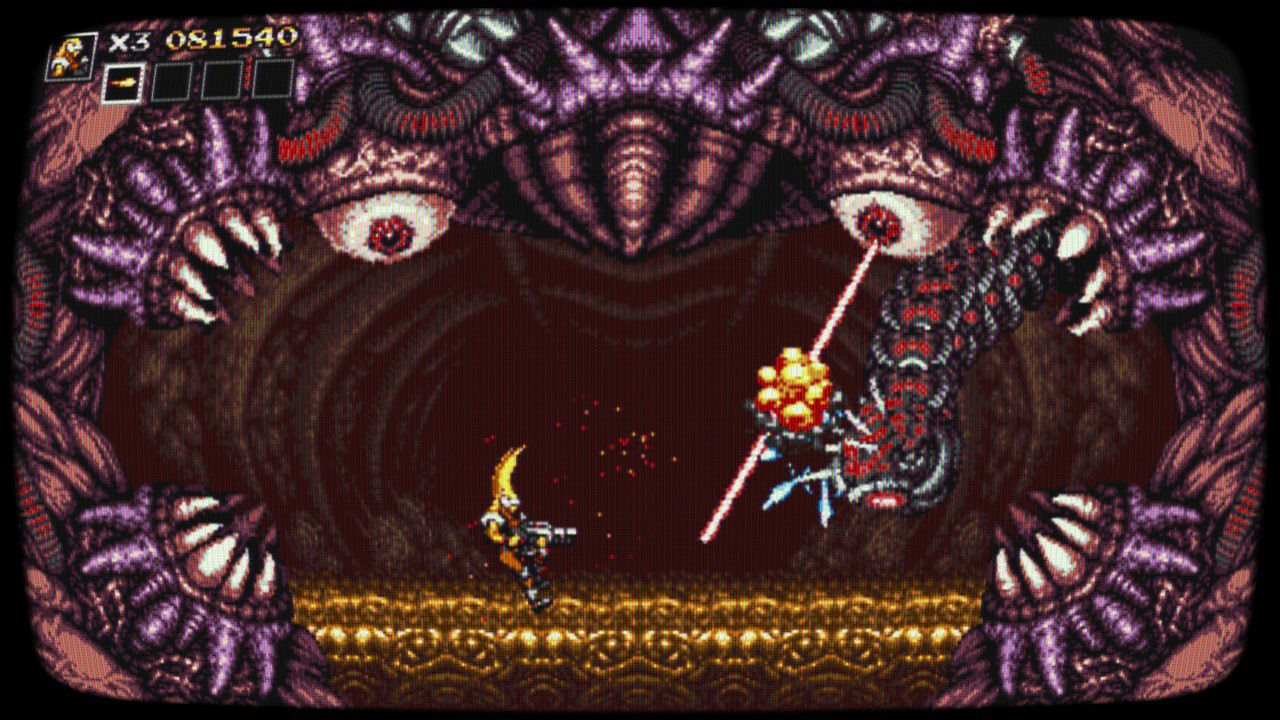 Developer JoyMasher’s two previous games, , were also both unabashed homages to action platformers of the late 80s and early 90s.

And though Blazing Chrome‘s style is ultimately less distinctive than its influences, it’s beautifully executed, down to the pure joy I felt every time I went from prone position to a forward roll, or effortlessly sliced open a particularly gnarly-looking cyborg with my laser katana.

It doesn’t feel like there’s enough variety in the stages or differences between the four playable characters to keep me playing much beyond my first completion, but Blazing Chrome is certainly a worthy compliment to Konami’s own recently released Contra Anniversary Collection“especially on the Switch where, within just a few seconds, you can detach the Joy-Con, turn on the CRT filter, and pretend like you’re back in the summer of “˜92 reliving the shoot “˜em up’s glory days.