While it’s impressive seeing games like Minecraft being turned into weird little computers, there’s something about achieving the feat in Cities: Skylines that makes it seem so much more impressive.

Daniel Bali has, with the aid of some wind turbines and water pumps, managed to build a very small, very slow “4-bit adder” machine that is Turing complete.

To do this, he needed to build two types of gates. The first, an AND gate, was made by adding power lines to a water tower and sewage pipe. The AND NOT gate, though, was a little trickier, and involved building a wind turbine that had to be flooded. 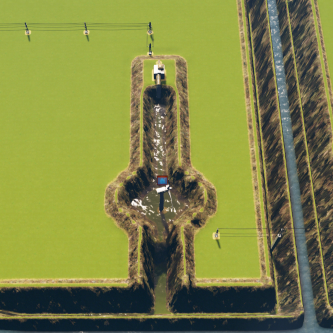 And the easiest way to make sure you could flood a wind turbine on command? Build a nearby city that generated sewage, which could then be piped into the “computer” on command (when flooded with sewage, the turbine will stop working).

All of which works, albeit very slowly. “This would make a very slow computer”, Bali writes, “one 4-bit addition took roughly 15 months in game which is about 20 minutes in real life.”

Not ideal, but then, you don’t make stuff like this for the actual computing power, you make it for the challenge. And if you’d like to read the finer details of how he came to accomplish this, and how it all works in more technical terms, Bali has a write-up here.