Competitive Farming Simulator Is Like An Adorable Tortoise Race

Gif: Kotaku, <a href="https://www.twitch.tv/videos/459082565?tt_content=full_vod_button&tt_medium=clips_watch_page&t=3h16m6s">Twitch</a>
To sign up for our daily newsletter covering the latest news, features and reviews, head HERE. For a running feed of all our stories, follow us on Twitter HERE. Or you can bookmark the Kotaku Australia homepage to visit whenever you need a news fix.

Farming Simulator, a game about planting and harvesting crops using giant pieces of agricultural machinery, held its first tournament since launching an esports league this past weekend. The results were surprisingly chill and wholesome to watch.

The team Trelleborg, which came in second at last year’s FarmCon competition in Germany, found itself on the winning side of the finals this time around against Landwirtschaft3.0.

Though the final score was only 556 to 523, the returning runners-up seemed to have things well in hand throughout the match. That was despite a handful of minor hiccups that, while fascinating to watch unfold in real time due to their intrinsic Farming Simulator-ness, didn’t end up slowing them down that much in the long run.

Trelleborg took home $US13,000 ($18,838) in prize money and are well positioned now going into the rest of the rest of the season, but even among the infamously reserved crowd of esports champions, these winners seemed particularly lowkey about their victory.

A gift certificate with the word “Yay” in all caps held up by one of the Trelleborg players on stage at the end was the only thing close to an exclamation on stage. To say that competitive Farming Simulator is a sleepy affair might be an understatement, but that quality is also one of its greatest virtues.

When the league was first announced in January by the game’s creators, Giants Software,a lot of people, including me, had… questions. How does one “win” at Farming Simulator? What makes someone especially good at virtual farming? And why would anyone find it exciting to watch?

I haven’t found answers to all of those questions, but having witnessed the inaugural tournament’s grand finals at FarmCon 2019, I now have an appreciation for the extremely anti-esport vibes surrounding the game’s competitive scene.

The rules, it turned out, are relatively simple. Two teams of three players compete in separate areas to see which can harvest the most wheat in 15 minutes. There are some wrinkles that add some opportunities for cheeky plays. For example, teams can get point multipliers by selling excess wheat to a local town.

This boosts the points they get for each subsequent bale of wheat harvested while also decreasing their opponent’s multiplier. Teams also get more points for loading their wheat into the top door of the barn through a conveyor belt, although it takes a little bit more time and requires extra precision to get the bale situated on a conveyor belt just right. Each field is also separated from the barn area by a small drawbridge that occasionally moves, which is the competition’s only map hazard. 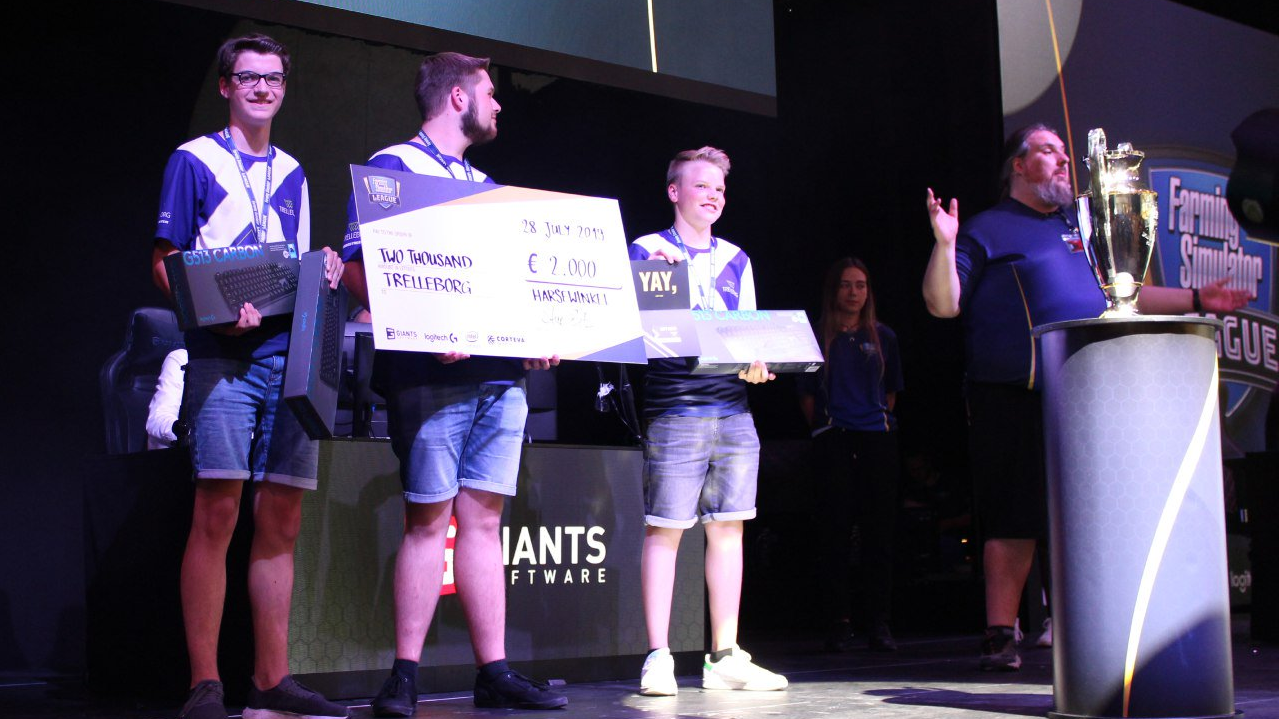 Often in competitions there are sharp contrasts that can be drawn between different characters or team playstyles. One fighter might be bigger and slower while another is smaller and faster. One soccer team might be cautious, waiting to counter-attack, while another dominates the game and takes big risks. Farming Simulator eschews these archetypes, with the core strategy taking a cue from Aesop’s fable “The Tortoise and the Hare.”

In Farming Simulator, everyone is a tortoise. Players slowly navigate vast fields of wheat and deal with the intricacies of detailed mechanical equipment until each individual task, gently accomplished in turn, eventually brings the toil to an end. Try to imagine the golf of esports and you’ll probably end up with something close to the tranquil plodding of a Farming Simulator match.

One of the first things esports newcomers tend to notice when watching a tournament is how loud the casters are. Commentators in traditional sports may get worked up every once in a while, like during a big play or when something otherwise shocking occurs.

In esports, casters seem to excitedly speed up and increase the volume of their speech as a matter of course. In Farming Simulator, that’s not the case. Commentators Joe Barnes and Paul Seal sounded more like they might have been auditioning for NPR than trying to drum up faux-enthusiasm for a new esport.

Instead of playing up the sense of urgency while commentating about a losing side, they would say things like, “This is when the bales are gonna start going on big time.” A small tractor getting snagged on the dirt and flipping sideways provoked a casual “Oh no.”

The most tense moment in the finals came when team Trelleborg’s upper barn window appeared to get blocked by a rogue bale. Situated perfectly perpendicular to the opening at the top of the conveyor belt, the commentators speculated that Trelleborg might be resigned to stowing the rest of their haul in the lower door, significantly decreasing their possible points.

It would have been poetically tragic for the team that had done almost everything right up until the last few minutes to be foiled by such a small detail.

The Farming Simulator gods had other ideas, however, and whether through glitch magic or some unforeseen physics, the bale eventually dislodged itself, freeing up Trelleborg to bring home the W in the unassuming, workmanlike approach they’d taken to the rest of the match. No fancy maneuvers or trick plays.

Sometimes, it’s enough just to get the work done.