DC Universe’s upcoming the people who need to understand them the most. Batman, for example, is a grown man who dresses up in bat-themed fetish gear, making it perfectly reasonable for Harley to assume that Batman fucks bats. That’s just logic.

In order to give audience members a better idea of what to look forward to, Harley Quinn‘s first episode premiered during DC Universe’s panel at this year’s San Diego Comic-Con, with executive producers Justin Halpern and Patrick Schumacker and producer Jennifer Coyle in attendance. The biggest takeaway from the pilot is that there’s definitely more than a little life left in the streaming platform.

Like DC Universe’s other big animated offering,Â Young Justice: Outsiders, Harley Quinn makes use of DC’s deep catalogue of supporting hero and villain characters in order to immediately give itself a larger sense of place and identity. But what sets Harley apart is its decidedly more adult, hyper-violent, and raunchy sense of humour that’s much more in line with DC Universe’s live-action series like Doom Patrol and Titans.

But those comparisons don’t exactly do Harley Quinn justice, because the show’s very much its own beast, and the most impressive thing about it is how it connects to the larger idea of Harley Quinn as a character who exists far beyond DC Universe’s walled garden of streaming content.

Between its machine-gun fire, joke-a-minute hit rate and fondness for zooming in on people whose bones are being viciously broken, Harley Quinn often feels like the sort of show FX’s doomed Deadpool series might have been had it ever seen the light of day. But there’s a charming sense of inevitability to Harley Quinn that Deadpool never quite had.

As a character within DC’s pantheon, Harley’s star has been ascendant in the decades since her first appearance on Batman: The Animated Series. She’s evolved from being the Joker’s abused henchwoman into a dynamic antihero with her own drives and motivations.

As Harley’s profile’s grown larger across Warner Bros.’ brand, the concept of who Harley is has only grown more complicated and sometimes difficult to follow (in a good way). What this new series does most effectively is synthesise a huge chunk of the big Harley ideas into a concise jumping-off point for newcomers that’ll also delight longterm fans.

Harley Quinn opens with a story you’ve undoubtedly heard before, about a brilliant young woman who’s head over heels in love with a truly garbage clown of a man who’s open about the fact that he doesn’t give two shits about her.

When we meet Harley (Kaley Cuoco), she’s already well into her life of crime with the Joker (Alan Tudyk, doing double-DC duty here) in a way that feels more than slightly left of Batman: The Animated Series.

Here, Batman (Diedrich Bader) is always hot on the criminal couple’s tails as they’re terrorising Gotham’s streets, and it’s exactly what the Joker wants out of life, but the old song and dance has grown wearisome for Harley. It’s not that she doesn’t wanna do crimes anymore ” she definitely does, but Harley just wants her crimes to mean something the way her relationship with the Joker means so much to her.

But Harley Quinn is a series that immediately understands what Harley herself takes much longer to accept: that she’s a much more fascinating and fun character when she’s been decoupled from the Joker.

Harley’s realisation that the Joker’s never going to be in love with anyone other than Batman (again, someoneÂ who fucks bats, she insists on reminding anyone who’ll listen) is what sets Harley Quinn’s events into motion and frees her up to hang around a wide swath of other Gotham deviants. 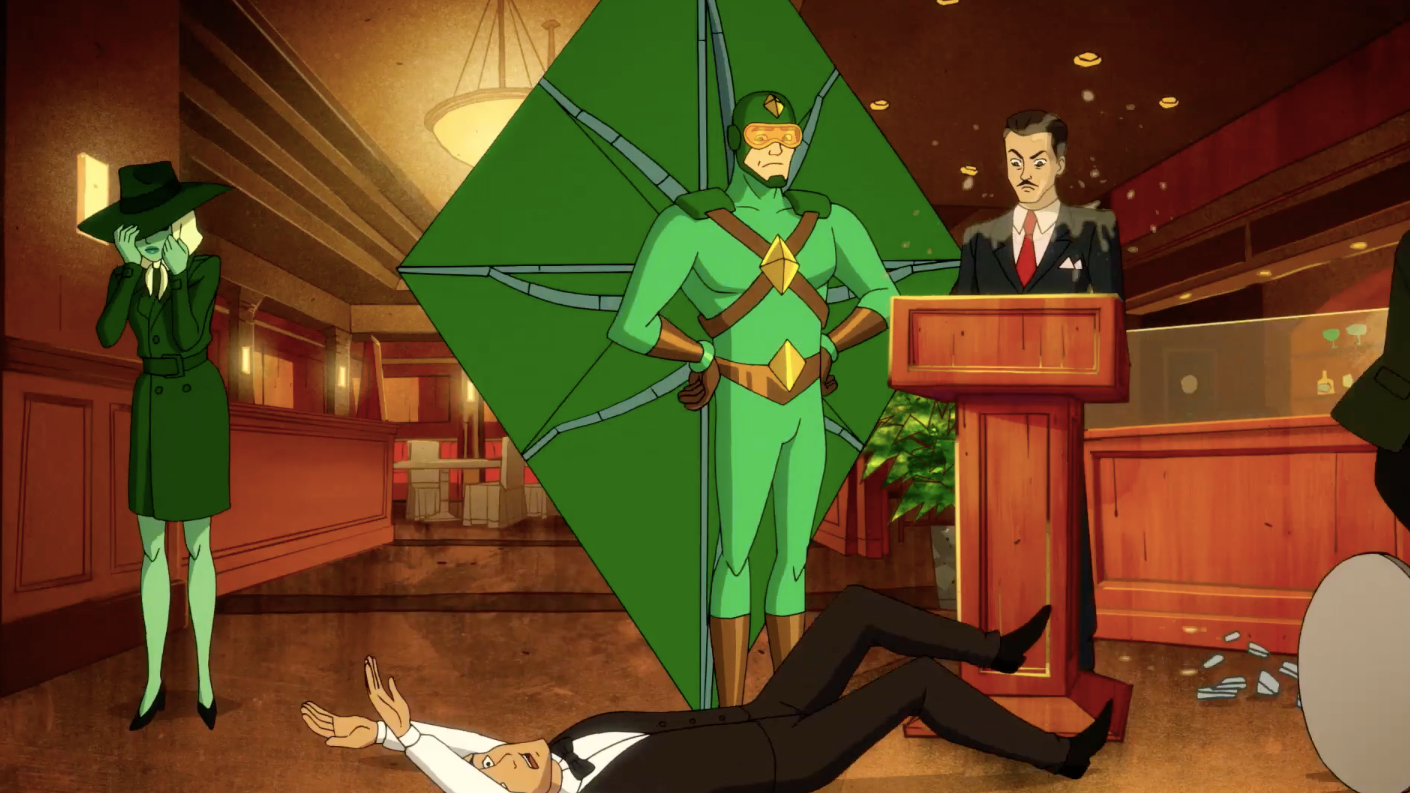 So much of what we think of as Harley’s defining characteristics come from the fact that we usually only see her interacting with the Joker and Batman that scenes featuring her and Poison Ivy (Lake Bell) are an interesting change of pace.

Like those other characters, Ivy’s a frequent fixture in a number of Harley’s adventures, but here she’s less of a sultry bio terrorist playing around at the edges of Harley’s sexual exploration, and she’s more…well, she’s still those things, but Harley Quinn approaches those elements of her character in a notably different way.

There are so many different kinds of stories about Harley ” about exploring one’s sexuality, surviving emotional abuse, getting into roller derby, etc. ” that speak to people on different levels that Harley Quinnâ„¢, the brand, has become as fractured as the character’s mind.

This is why you can have all-ages versions of Harley Quinn in DC Superhero Girls exist alongside live-action Harley Quinns who murder children, and a parallel universe comics Harley who’s an old lady from a dystopian future.

None of these Harleys is the “right” or “wrong” Harley, they’re all riffs on core concepts associated with the character that different creators have turned into canonical parts of her expanded mythology over the years.

That said, Harley Quinn’s overall scale is somewhat smaller than some of the character’s more fantastical exploits elsewhere, but the series is keenly aware of the broader cultural landscape it exists within and the unique space is has to tell a definitive Harley Quinn story. The character got her start stealing the show in an animated series, and so it feels right that another cartoon would make a go of giving her the center stage in a big way.

Harley Quinn knows where its heroine came from and does a solid job of making its peace with her origins before moving on to flex and show off just what all Dr. Quinzel’s capable of now that she’s become a bona fide star.

Harley Quinn hits DC Universe this October in the U.S.. As for when it’ll reach Australia — that’s anyone’s guess.