Doom Patrol’s Back, Baby, And Everyone Just Wants To Find Themselves

They might have been lighting up DC Universe this year, but it’s been a hot minute since we’ve seen the Doom Patrol in DC’s comics. As of this week, the long wait since the wacky exploits of Milk Wars shook this incarnation of the world’s strangest heroes to its core is finally over, and the team is picking up the pieces — as is Doom Patrol itself.

As great as the team’s return as part of Gerard Way’s offbeat, on-again-off-again DC imprint Young Animal was — with its lyrical whimsy and dedication to the weirdest aspects of the team’s makeup as part of an introspective superhero character drama — the series played much better in collection than it did issue-by-issue.

So when it all came to a momentary end with the arrival of Milk Wars and the series’ 12th issue, it not only left our heroes struggling to find who they were to themselves, but in many ways, Doom Patrol found itself on a similar quest.

It seems to have, for now at least, found that in Weight of the Worlds #1. Penned once again by Gerard Way and Jeremy Lambert, with art from James Harvey and Sajan Rai, this might be a new number one, but it is essentially Doom Patrol #13 in all but name (hell, even the opening refers to itself as such).

Everything that happened in the series and Milk Wars happened.

Casey and Cliff found out they’re fictional amalgams (and in Cliff’s case, became the human version of himself once more). Original team member Rita Farr, the Elasti-Girl, was resurrected.

Jane still lapsed into the underground, overwhelmed by one of her dominant personalities. Larry the Negative Man still freaks out about his time away from the Negative Spirit within.

Newest team member Lucius, perhaps the least-best-served in this re-introduction, is still working through his return to the real world after slaying an inter-planar demon with his parents. Danny the Street is still Danny the Ambulance/Danny the Theme Park (Inside an Ambulance). 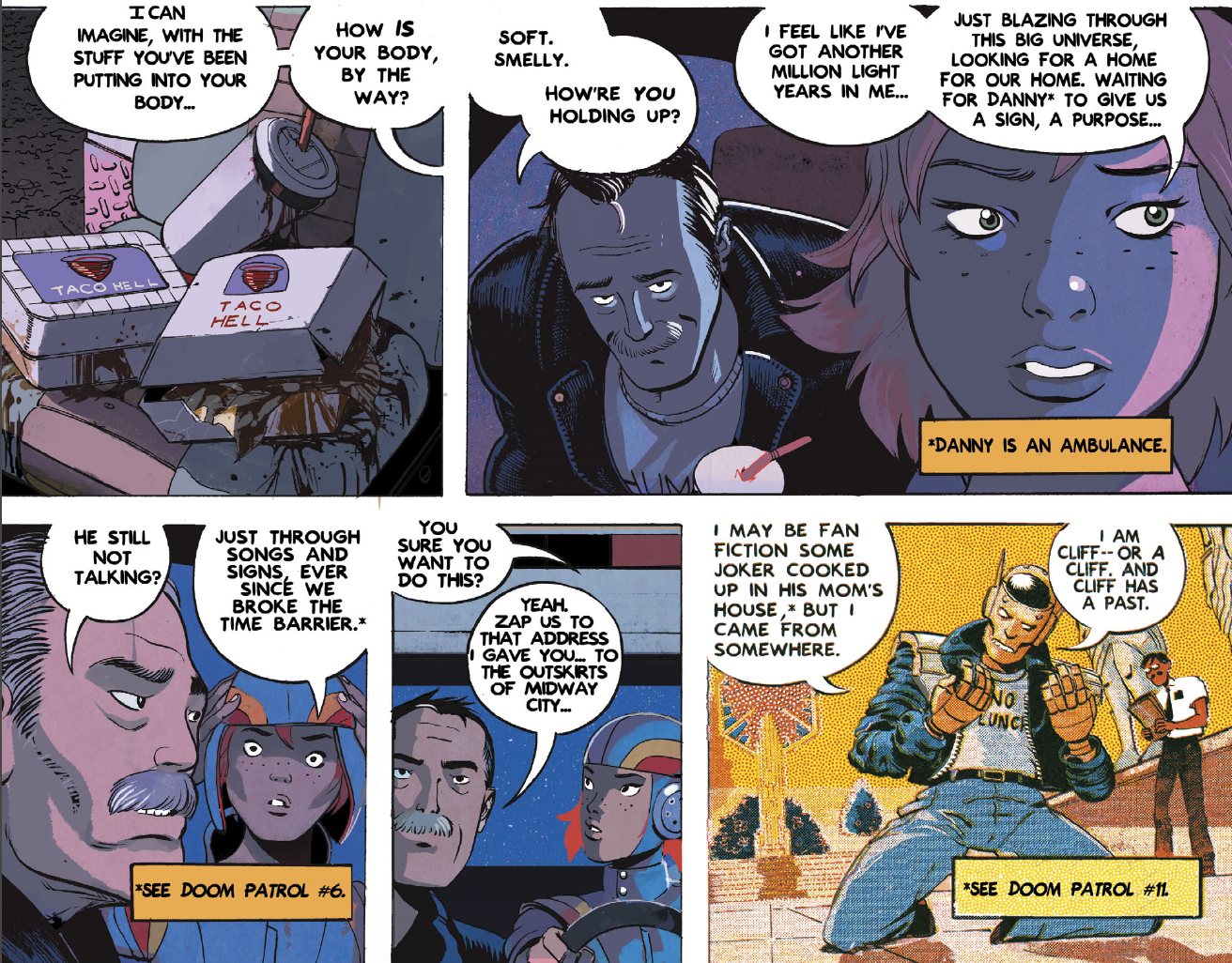 Which means, that, refreshingly, we also get to see how our heroes are actually dealing with their problems, instead of just acknowledging that they exist before getting on with the important superhero stuff.

While Weight of the Worlds primarily uses how the team is trying to re-centre itself as a means for anyone unfamiliar with the original run to catch up (or anyone who read it and forgot everything that happened almost a year and a half ago), it offers the rare chance to actually see heroes just… taking time to actually address their mental health, to varying forms of success.

And in a capacity that isn’t just going out onto the street in a cowl and cloak to punch things all night! Not that anyone else at DC Comics is doing that, no. 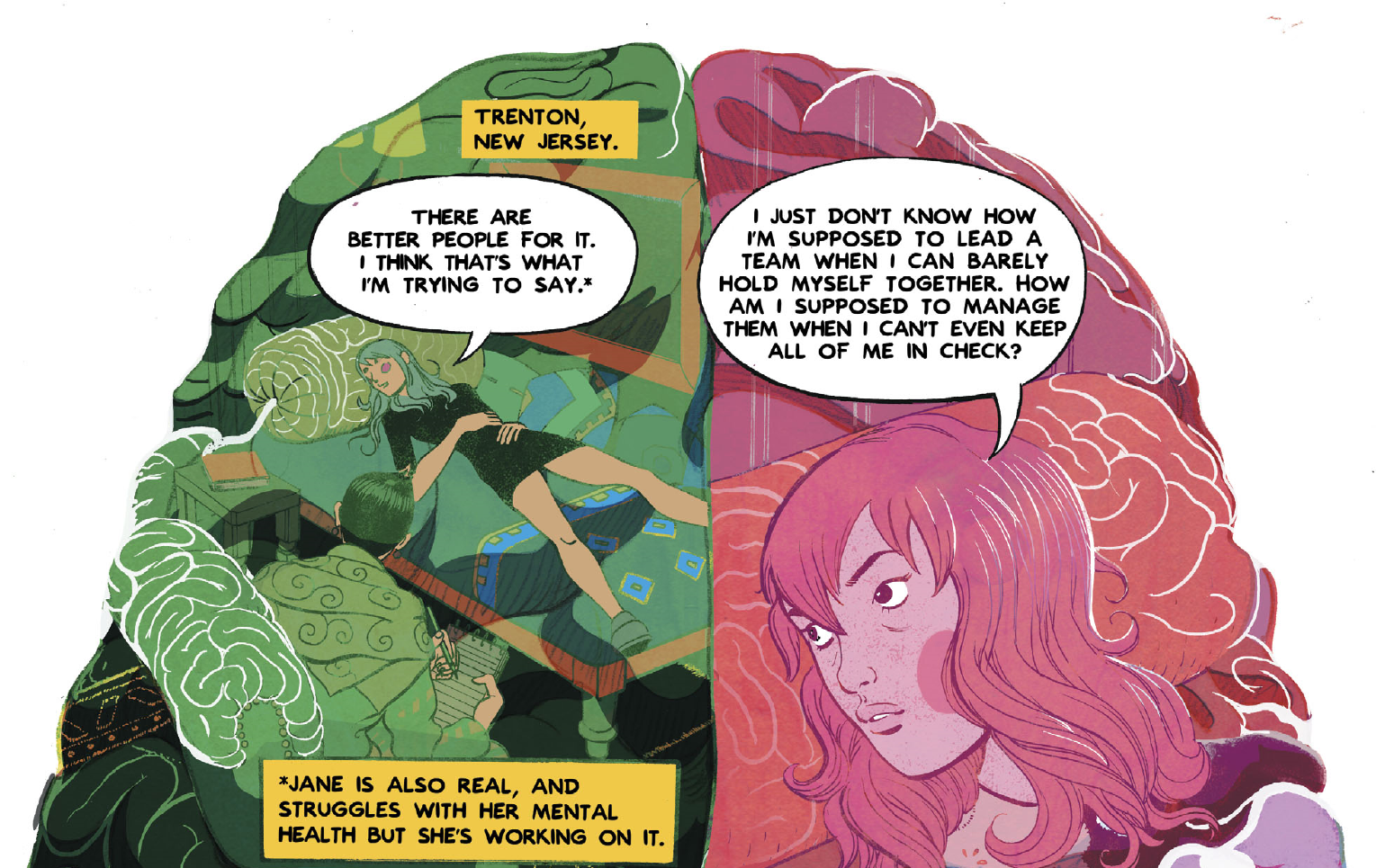 Casey still flings herself into her work, desperate for a new mission as she helps navigate her friends through their own attempts to recover. Rita, working with Flex Mentallo, literally attempts to build herself back together, training to maintain her physical form all over again. Larry picks up an emotional support dog as a quasi-new teammate. Jane gets a therapist.

Cliff the not-so-robotic Robotman might be the closest the issue comes to a failure in this regard — rebuffed by the mother he attempts to reach out to to begin his own healing process as he explores his humanity — but he still tries.

That’s kind of the point of it all. The Doom Patrol, god bless them, are trying, taking a moment to pause and find themselves in the eternally bizarre cosmos they fling itself about in.

But as much as this returning issue is about the struggles of a team of fractured people learning to deal with, and move on from, their own personal traumas, it is also still a Doom Patrol book, which means a) there has to be some weirdness and b), there has to be a mission to centre our heroes on.

It’s really here that Weight of the World shines. It starts with a simple ask from Jane to Danny — “Take us where there’s hurt, take us where we can help” — but it catapults the team on a suitably wild interstellar road trip, like some kind of superheroic Doctor Who where the phonebox is a genderqueer sentient ambulance. 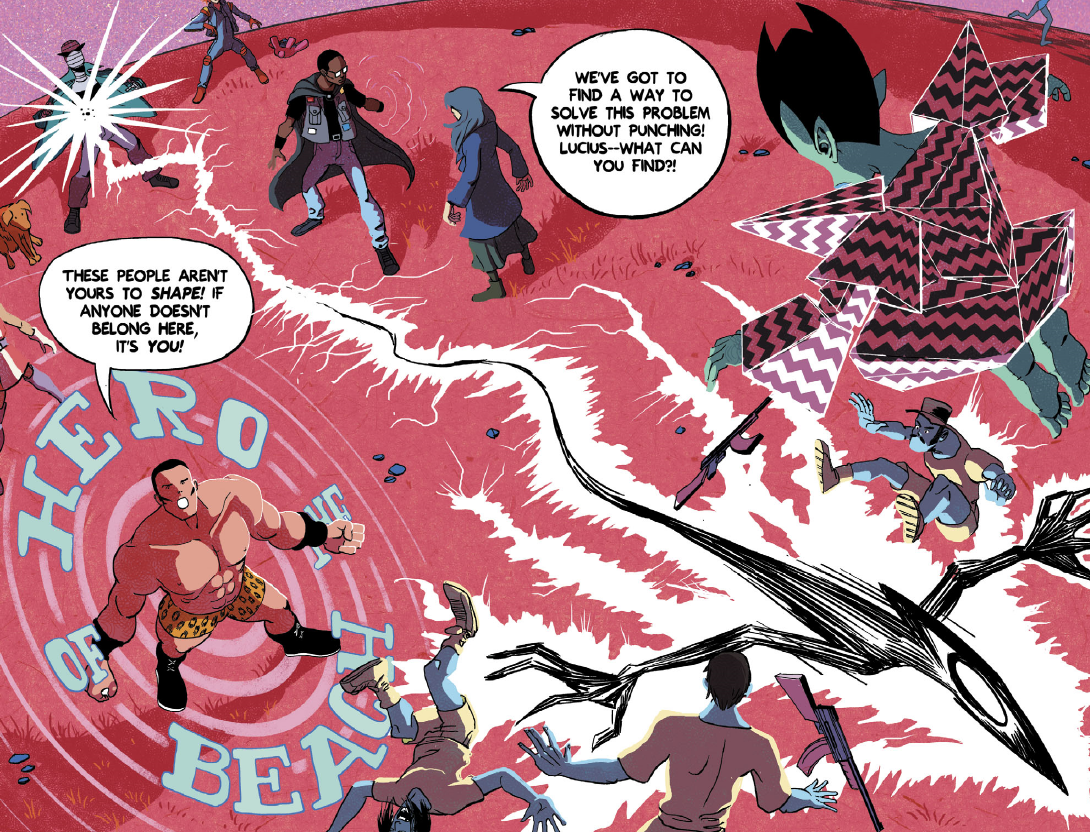 The mission is simple enough: The people of the planet Orbius, tricked by a fitness equipment selling con-artist named Gerb fashioning himself as the speaker for an ancient god, are exercising themselves to death in an attempt to defy their natural, spherical shape.

The Orbans are literally running from their true selves, participating in ritual marathons aboard an infinite treadmill to achieve a slender shape at the cost of being able to actually live a life beyond running in the marathon eternal.

It’s weird. It’s, dare I say, goofy. It’s utterly, completely absurd — but reflective of the team’s own personal quests to find themselves, and therefore a quintessentially Doom Patrol kind of story.

Instead of choosing to run from their true selves as the Orbans have, our heroes are now working to find that sense of self — supporting each other along the way, as they help the Orbans free their true god and embrace their spherical states in a healthy manner.

Their teamwork, bolstered by all these small little moments of self-care across the issue, help to carry the day, and in victory, Jane, her ragtag crew and the series itself are emboldened with a new sense of purpose beyond being misfits. 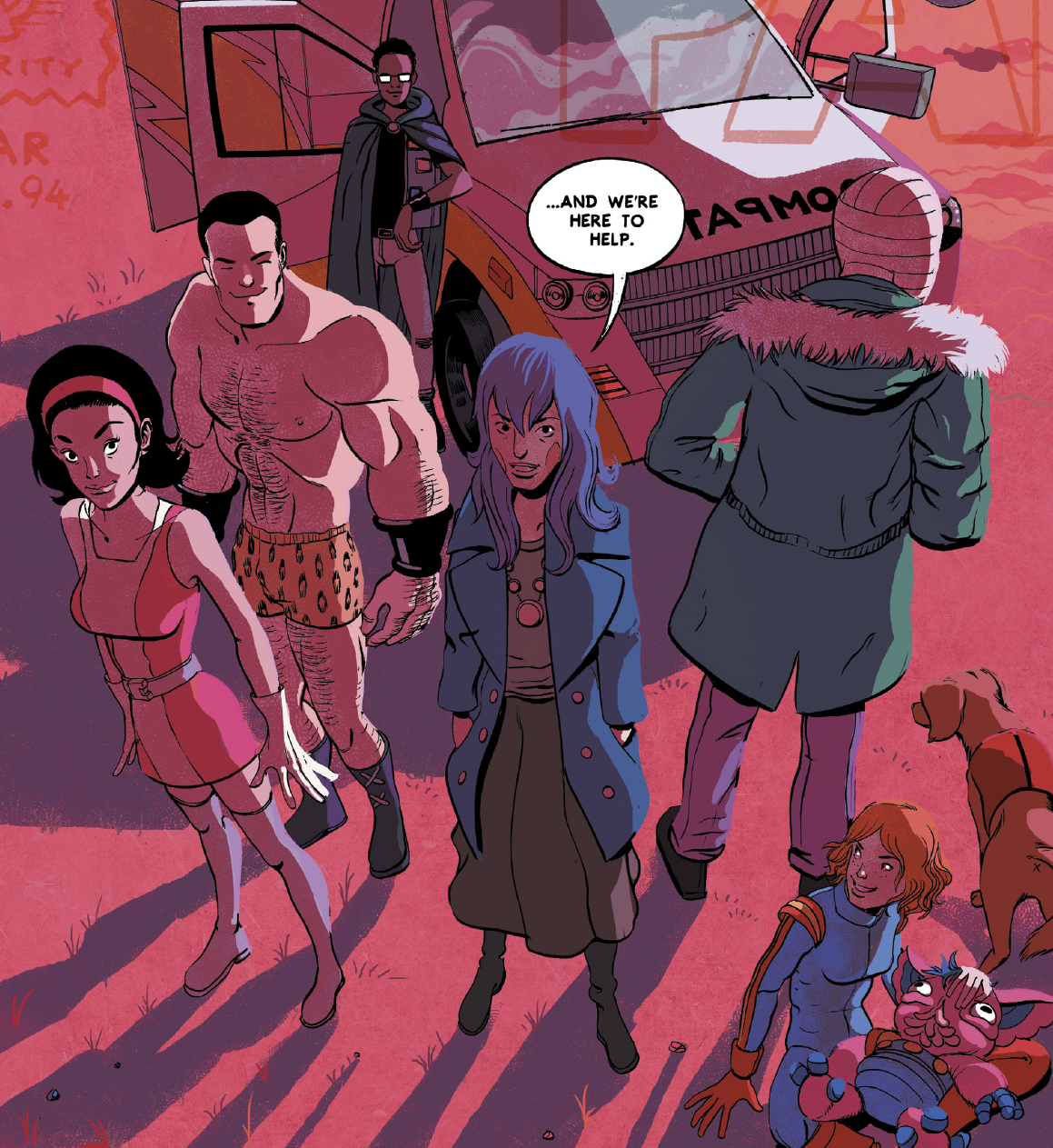 The Doom Patrol is on a mission to help the universe. And in doing so, they might just help themselves along the way.