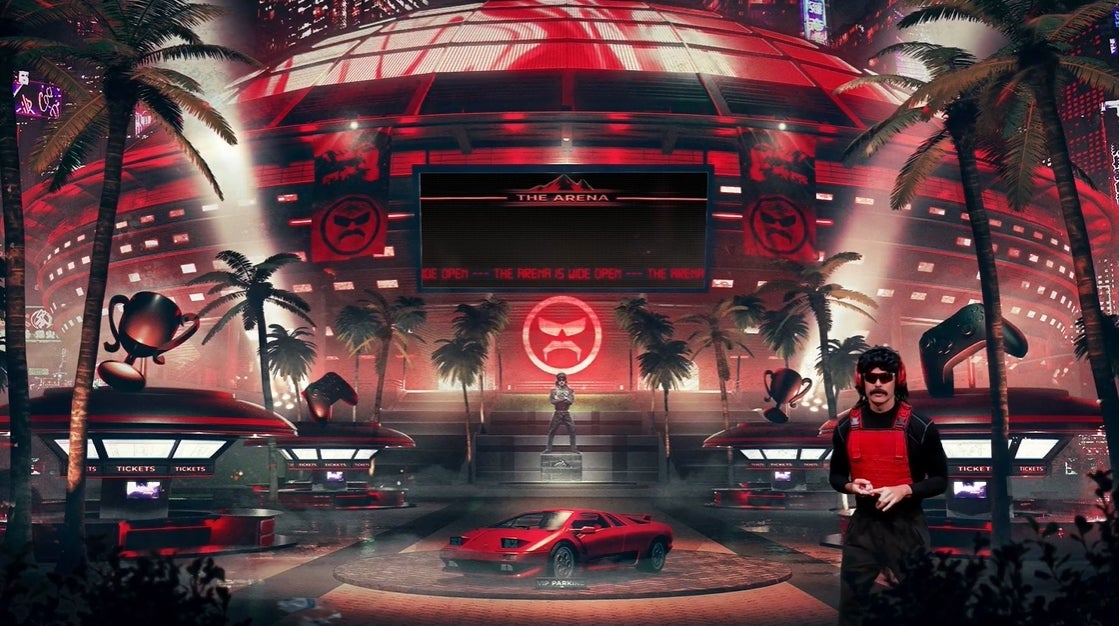 His suspension lasted two weeks, during which he released a series of trailers for his return and tweeted an awkwardly worded apology “on behalf of the Dr Disrespect brand.” The result of all that hype? 80,000 concurrent viewers and some eye-popping donations.

Today’s stream began with Doc introducing his new “arena,” aka a green screen graphic of a futuristic arena slathered in buckets of red and black.

He showed off a new stream intro and “drove” in a digital car while talking on the phone, jokingly promising to pay somebody hundreds of thousands of dollars for the new intro. He also dropped in advertisements for his subscriber program and chugged from a container of Dr Disrespect-branded Gfuel.

He stayed in intro mode for about 30 minutes, during which time his concurrent viewer count rocketed up to 80,000, making him the most-watched streamer who was live on Twitch at the time (for perspective, Ninja pulled in around 36,000 concurrents during this time period, while a Russian esports event managed a little over 50,000).

His viewer count quickly plateaued, however, and proceeded to slowly deflate once Doc started playing PlayerUnknown’s Battlegrounds with other streamers, eventually levelling out at around 40,000 concurrent viewers by the time I stopped watching (as of publication, the stream was ongoing). This is still notably more than his streams prior to E3, which had been peaking in the 20,000 concurrents range.

Early on in today’s stream, viewers complained about Dr Disrespect’s mic volume, to which he replied that he’d fired his director, Alex, over his role in the E3 bathroom incident. “A lot of you are probably wondering what happened to Alex,” he said.

“Obviously, Twitch would not allow me to bring him back as part of the team. We got rid of him. I just kicked him out of the stream. Saves me a lot of money anyways. I can do all this by myself. So that’s exactly what I’m doing. Handling the music. Handling the transitions. Handling everything, ladies and gentlemen. And then maybe one day, we’ll find a director.” It’s never been clear if Alex is a real person or a running joke (Doc has “fired” him on numerous occasions over the years.).

Dr Disrespect’s focus seemed noticeably split today. Among other things, he failed to immediately call out a handful of donations, something for which he later poked fun at himself by yelling at himself in a green screen mirror.

Dr Disrespect acknowledged that his stream overlay no longer contains sponsorships from hardware company Asus or its subsidiary, Republic of Gamers. Doc did not chalk this up to the bathroom stream (which he didn’t mention), but instead said their deal had come to a “a nice, mutual conclusion.”

The bathroom stream did briefly come up when Doc revealed that an emote he’d designed that referenced it – which depicted him peeking out of a bathroom stall – got rejected by Twitch.

Most of the stream, however, was business as usual. Doc played PUBG with other streamers, and they performed well but didn’t pop off to any tremendous degree. Between matches, he stood up and walked around various green screen backdrops, such as the arena’s locker room and gym.

He also commentated his own PUBG match at one point, with a custom overlay and vocal effects. He yelled a bunch early on but ultimately settled into a more relaxed cadence. He talked trash about streamers like Ninja and Shroud. The stream felt mostly like a standard Doc stream with some snazzy new effects.

But change is on the horizon. Or at least, more IRL streams are, despite the disastrous conclusion of his first. “Oh trust me, we’ve got a lot of plans for IRL,” Doc said in response to a viewer comment about IRL streams. “All these dumb-dumbs saying, ‘That’s your last one.’ Go move into your next box and lock it. Permanently.”

This is not the first time Dr Disrespect has returned to Twitch after a long absence. At the end of 2017, he began a self-imposed exile after an on-stream confession of infidelity to his wife.

That break lasted nearly two months. When he returned in February of 2018, he was greeted by nearly 400,000 concurrent viewers, as well as a veritable avalanche of donations and subscriptions. Today was a far cry from that.

Still, there’s an argument to be made that the Twitch suspension boosted his as much as it held him back. While Doc couldn’t dip a (probably branded) ladle into his usual cash stream during his time away, he got plentiful PR that resulted in tons of money flowing his way today.

Numbers-wise, he had his single best day in months. Did it make up for all the time he took off? Impossible to say, unless he decides to just come out and say it himself. He certainly didn’t seem too bummed about the whole series of events today.

“Feels good to be back, Twitch,” he said with a grin as donations and subscriptions poured in.