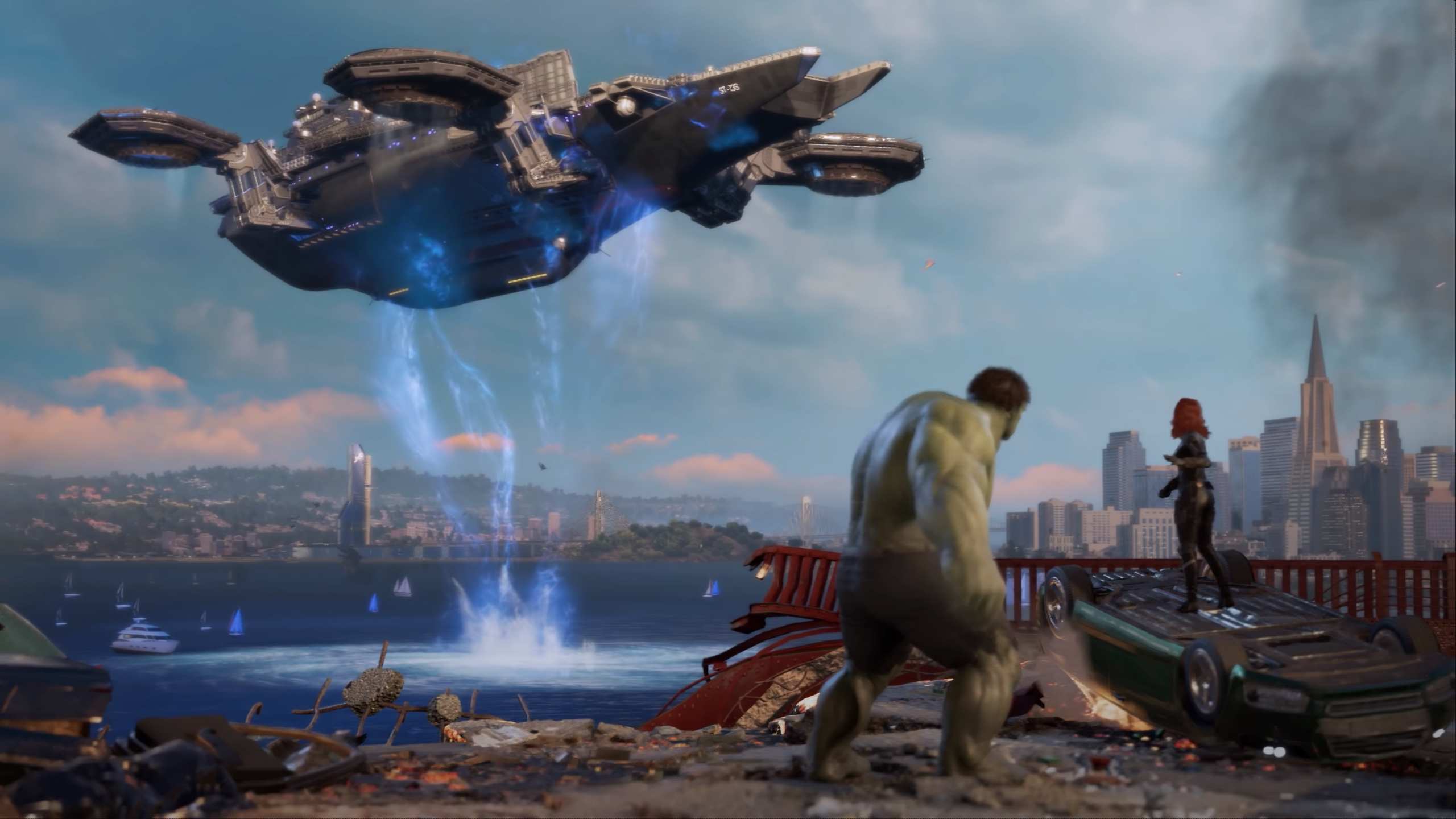 Friday at San Diego Comic-Con, Marvel Games offered a closer look at what fans can expect from Square-Enix and Crystal Dynamic’s Marvel’s Avengers. Having given us a glimpse at E3 last month, we got to see a little more of just how this take on Earth’s Mightiest will deal with the seeming loss of one of their own.

After about an hour talking about Iron Man VR, Ultimate Alliance 3 and Conquest of Champions, Hall H was shown about 20 minutes of gameplay, described as the prologue of the game. Things begin a massive celebration for the Avengers in San Francisco, when, out of nowhere, there are explosions on the Golden Gate Bridge. Captain America sends Thor, Iron Man, and the rest of Earth’s Mightiest to check it out and, very naturally in gameplay, you first play as Thor, then as Iron Man. Then Hulk, then Black Widow.

The Avengers are all trying to stop this massive terrorist attack that, we find out, is being orchestrated by Taskmaster, a rogue mercenary villain in the comics who has “Photographic Reflexes” that let him rapidly master many forms of martial arts, and even emulate some of our heroes’ combat skills.

When the player finally defeats him, the Avengers realise they were being distracted. Something hugely bad is going down in the city and they have been defeated. Plus, in the process, Captain America was killed in a Helicarrier crash. Things then fast forward five years where everyone now hates the Avengers. They are blamed for the mass destruction and death, and divided by the loss of their friend, ally, and leader. Which is where the footage ends, and the game truly begins.

One thing we should note for fans of the comics, and perhaps the most interesting thing to come out of the footage, was the fact that prologue was also centered around a narration by a young girl, who talks about meeting her heroes. That girl may or may not be the same one briefly seen in the footage who is seen running around looking for her Ammi and Abu, before falling down and inhaling some mysterious blue gas… sounding familiar yet?

Because to us, despite the fact no one at the panel actually addressed it, that sounds an awful lot like the magnificent Ms. Marvel. Her narration comes back later too, so it seems like if this really is Kamala, she could play a very important role in Avengers‘ story.

Back in the gameplay, each Avenger has their own unique powers and moves as you play with them and it’s a very “action first, reality second” kind of game. Lots of big power moves, lots of big explosions and energy blasts. That gameplay is not just in this completely original single player campaign story either. It goes into a multiplayer mode where players can design each of the Avengers in their own way and customise their powers to do battle online with, or against, friends. 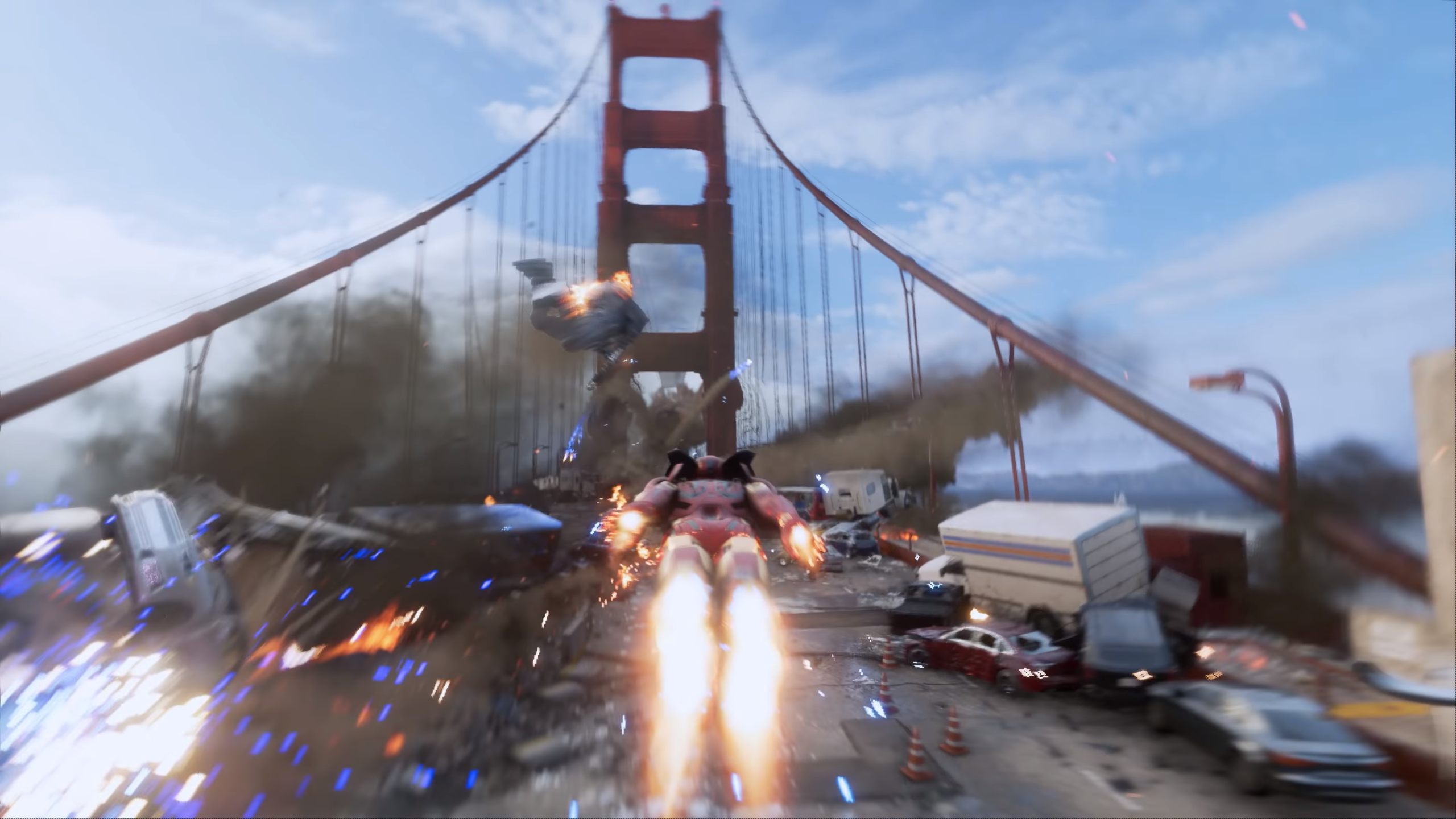 Each Avenger has their own unique gameplay feel, like Iron Man soaring through the air shooting his repulsor blasts. (Image: Crystal Dynamics/Square-Enix)

The fact that the Avengers are blamed for the destruction, that a major character dies, and that there’s a five year time jump, feels very much like the team behind Avengers used elements from all different kinds of stories — the comics, the Marvel Cinematic Universe and more”to create this story. A story that felt like it could have a lot of emotion in it, especially if the promising intrigue of maybe introducing a new generation of heroes in a character like Kamala Khan ends up paying off.

Or, if you want, you can forget about that and just make Iron Man totally different colours and play like that. Or make Thor a viking. Or put Hulk in a zoot suit with a top hat. Or in war paint”all of which were actually shown in concept art revealed for the first time at Comic-Con, showing off the game’s customisation system. Whether or not those cosmetics will be included in the game’s story mode (it’d be a bit of a tonal mishmash, honestly), but they will appear in the game’s co-operative multiplayer section.

Avengers hits PC, Google Stadia, and Playstation 4, and Xbox One on May 15, 2020. Players on Playstation 4 will get early beta access to the game’s multiplayer mode, which is set to begin next year.