Fire Emblem: Three Houses is a game for interesting times.

At the start, none of the future rulers of Fódlan, the fantasy continent where Three Houses takes place, know that the regions they will lead are on the brink of war. Edelgard, the successor to the Adrestian Empire, is the only one who seems to have really grappled with what being a leader will mean, and it has made her cold.

Dimitri, future king of the Holy Kingdom of Faerghus, is prim and proper, but his first brush with an actual battle leaves him furious about the loss of life. Claude, who will someday lead the mercantile republic that is the Leicester Alliance, has his eyes on a much bigger picture and hides his schemes behind laughs and smiles. 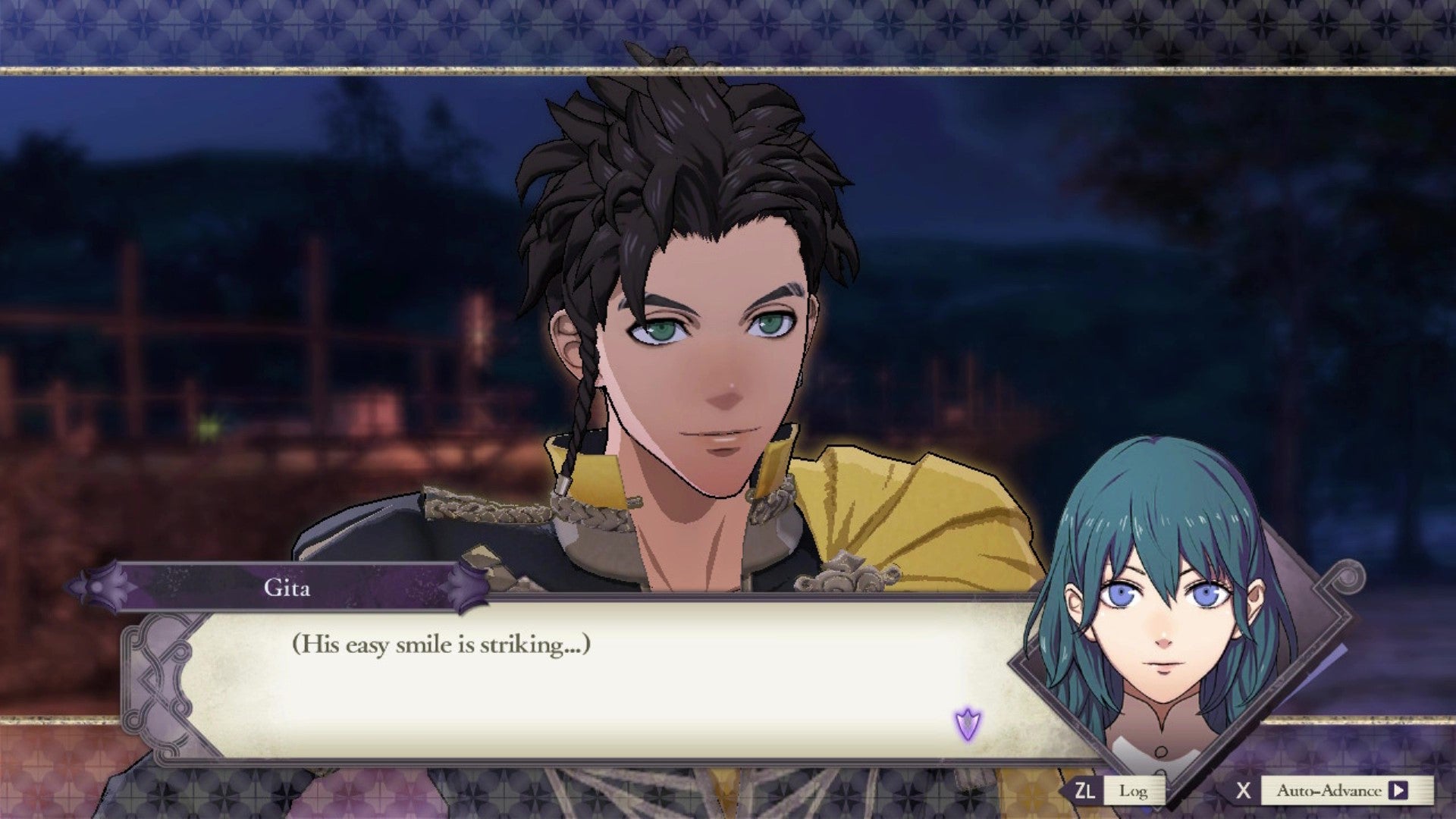 I feel as if we're watching history being written.

The world, the characters, the writing, the tough-as-nails combat.

It's easy to become overwhelmed by sheer data.

58 hours on the main story, then another 10 hours in a new save. I have to know what happens to the other houses!

By the time the game is finished, only one of these teenagers will succeed. Which one prevails relies on your player character, who is named Byleth by default. She dreams of ancient wars and an amnesiac girl whose connection to Byleth is shrouded in mystery. Byleth has been enlisted as a professor at the Garreg Mach monastery, where he or she teaches one of three houses: the Blue Lions, the Golden Deer, or the Black Eagles. I went with the Golden Deer after being charmed by Claude’s easygoing nature.

The political struggles of each region of Fódlan are as much characters in this story as the plucky teenagers who will someday clash on the battlefield. The history of Fódlan and its primary religion, the Church of Seiros, is deep and intricate. That I can recite all the names of these places by memory—as well as the names of their ruling families—speaks to how thoroughly engrossed I was in this political conflict. While there is some fantasy nonsense going on in the latter half of Three Houses, it’s mostly a story of people and their competing desires. It also shows how those competing desires, when enacted by large political powers, can devastate everything in their path. 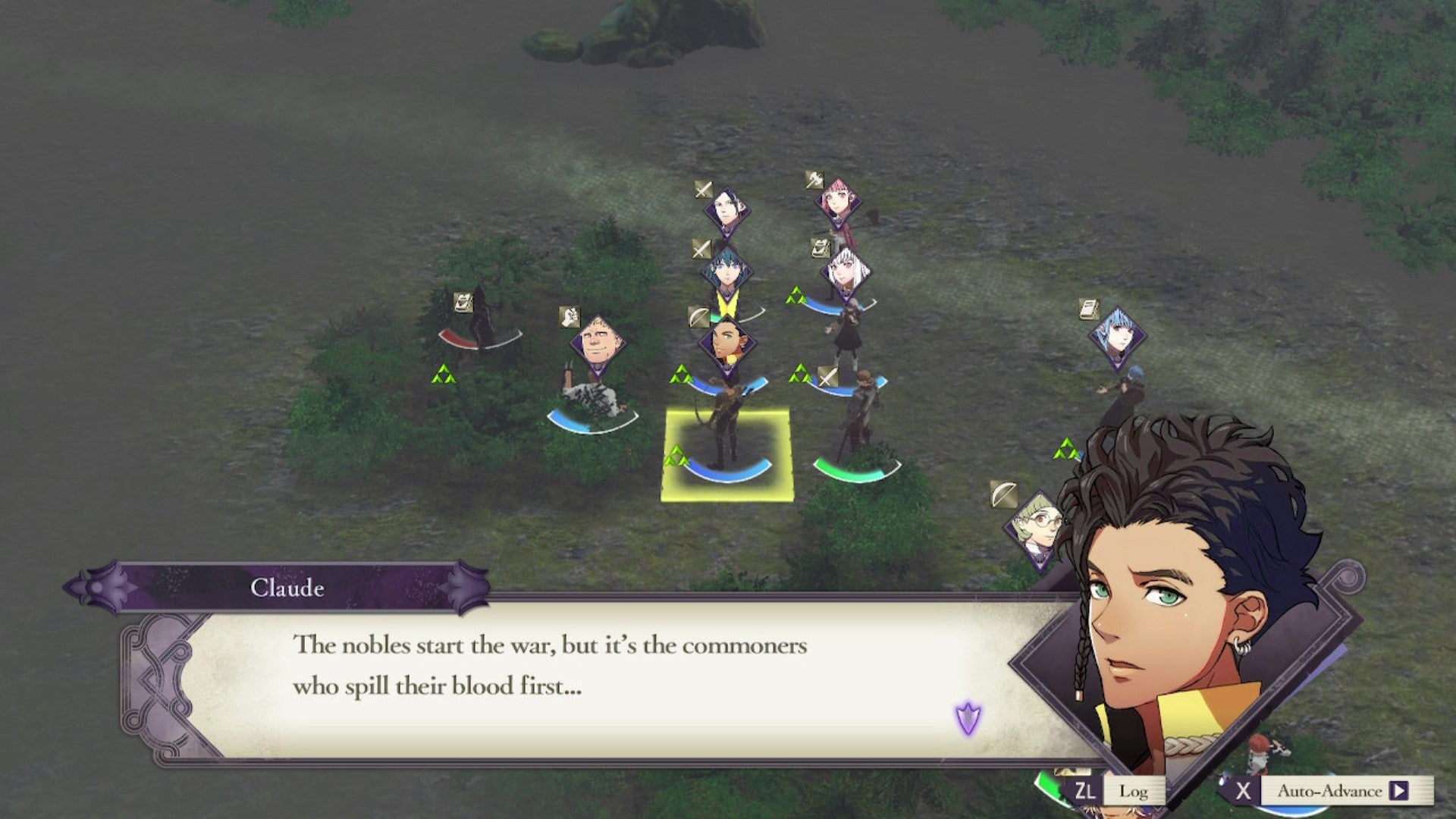 Take Cyril, a student-age refugee who lives and works in Garreg Mach rather than studying there. He doesn’t want to get close to the students around him. Soon, they’ll leave the monastery, but he will still be there, cleaning up after the messes of another group of privileged kids. That they are even in the same place at the same time is an accident—in Cyril’s mind, they still inhabit wholly different worlds. Or take Dedue, Dimitri’s right hand man. He’s originally from Duscur, a formerly allied nation that was razed after they betrayed and killed the king and queen of Faerghus, Dimitri’s parents. While the people of Fódlan generally distrust people from Duscur, Dimitri speaks to Dedue like a friend and an equal. Thus Dedue has devoted his life to serving him as ably as he can, even if it means leading the kind of indiscriminate slaughter that obliterated his homeland.

It isn’t just the writing that’s sharp in Three Houses. The always good tactical gameplay has been honed to a finely tuned edge with turn-based combat that captures the plate-spinning chaos of commanding of an army. Each encounter is a puzzle where the goal is to get everyone through to the end alive. In Casual mode, where characters don’t permanently die, you can take more risks, although I tried to make sure everyone made it out alive anyway—battles get much tougher when you’re low on allies. In Classic mode, which has permadeath, protecting my band of teenagers was paramount. What kind of teacher would I be if I let my children die? Luckily, in Fire Emblem: Three Houses, you get the power to rewind time using the Divine Pulse. Mapped to the left trigger, it allows you to rewind as far as you’d like in a battle when you activate it. You’ll start out with limited uses, though you’ll earn more by the end of the game. It doesn’t drastically figure into the strategy beyond acting as an alternative for save scumming, but it does teach you how to play smarter.

In one particular battle, I used it to retry the same turn three times. I was trying to push myself to kill a particular low-health enemy unit before the end of the turn and keep all my characters alive in the process. In my first attempt, I had to leave one of my units out in the open, where they got ganged up on and died. It didn’t matter which character I left out there; they were destined to die unless I figured out a new strategy. So instead, I pulled back, leading that one low-health enemy to me and drawing in the farther units. The unit I had been trying to kill attacked one of my characters and then died in the counterattack. Because the other three units that had been killing my characters were closer to the whole group now, I took them out easily. 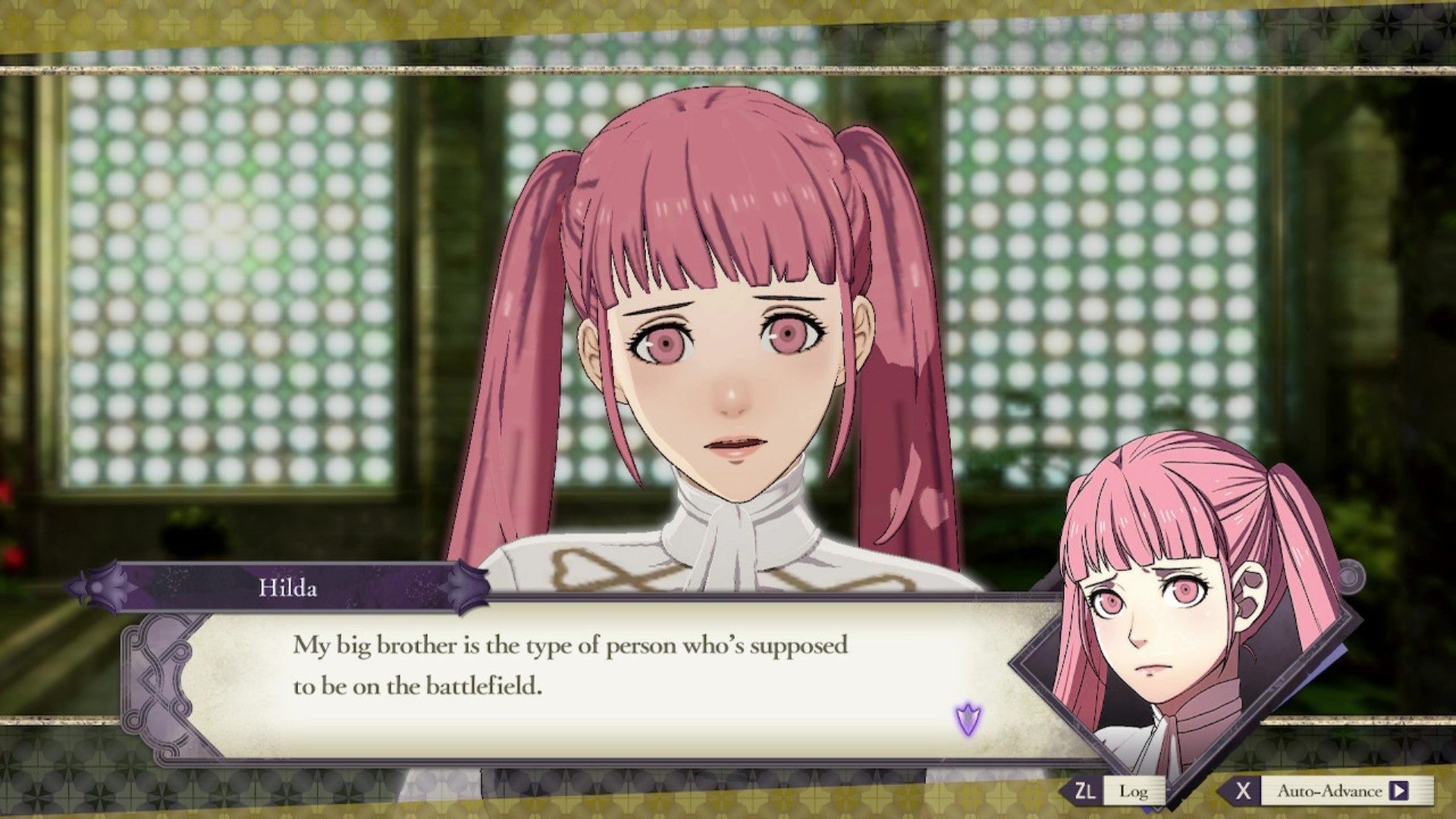 There’s enough variance in enemy types and maps that each battlefield is a wholly different challenge. Some maps have scorching hot spots that damage characters. Others are cloaked in fog, and you can only see enemies when they’re close to you.

As the game goes on, you’ll see more mounted, flying, and heavily armoured units on the battlefield, making you utilise every character’s skills to take them down. You even fight giant demonic beasts who have devastating attacks and much more health than other enemies. You’ll never be able to rely on one powerful character to make it through combat unscathed. You have to learn how to get everyone working harmoniously—to use an archer to chip away at a unit’s health so that a lancer can come through with the finishing blow.

Instrumental to figuring out this harmony is the time spent in Garreg Mach, where you teach your students and make them more effective in combat. Skills build over time during battle, but in the teaching phase of the game, you can speed that along or even foster new skills. Lorenz started out as a lance user, but on a whim I taught him some Reason, which is one of the two kinds of magic in Three Houses. Turns out he is an absolute beast as a magician, and by the end I had made him a Dark Knight, riding around the battlefield and setting people on fire. Although some units will always feel more effective with certain weapons over others—try as I might, the bookish Ignatz always hit harder with a bow than a sword—there’s still a surprising amount of customisability. 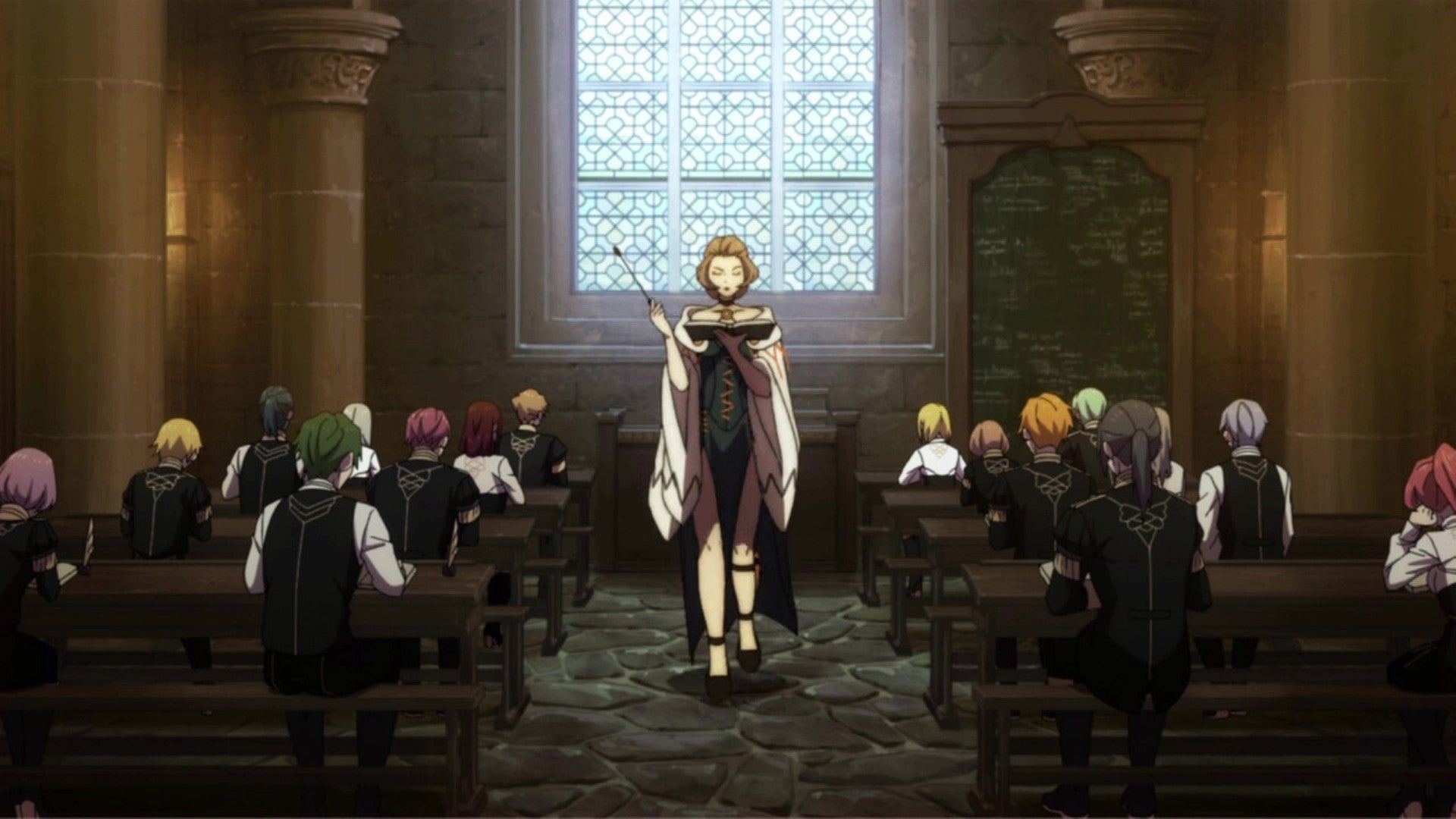 In that way, the gameplay in Three Houses feeds into the story elegantly. As is now customary in the series, characters who help each other on the battlefield can unlock support conversations that build out their personalities and the world they inhabit. By having Marianne, a shrinking violet who doesn’t talk to anyone if she can help it, pair up with Lorenz, a haughty noble who passes the time by looking for a wife worthy of his station, you see new sides of them.

Lorenz thinks Marianne is perfect just as she is, even though Marianne wishes she could change her temperament.

She learns confidence from him, and through that, you see a side of Lorenz that isn’t completely obnoxious. After completing their support conversations, they’ll be more powerful when placed next to each other in combat.

There are other ways to build support, too. Most of them are in Garreg Mach, where you can dine with students, fish, garden, and shop, among other activities. By the end of the game, I knew its layout by heart and even had a favourite spot to hang out (by the greenhouse, looking out on the water).

Even after finishing the game, I can’t get my mind off Garreg Mach. I immediately started two new saves—one for each of the houses I hadn’t played. The characters are engrossing, the combat is pitch perfect, and the world feels fully developed, like it’s still hiding some mysteries I have yet to untangle.

At one point in Three Houses, Claude tells Byleth that he feels like he’s watching history being written. The students at Garreg Mach slowly begin to feel a sense of malaise as time marches on — their futures get murkier, and their attitudes turn darker.

I found myself all the more engrossed for the parallels I saw with my feelings about the real world during a time of intense political upheaval. It feels like watching a boulder roll downhill, barreling into a future I can’t control.

But in Three Houses, everyone knows that what they’re doing is worth it. It isn’t pretty or easy, and it comes with more than its share of heartbreak. But it is worth it: to fight, to resist, to push for a better world.

In Fire Emblem: Three Houses, Dimitri, Edelgard, and Claude all envision a future for Fódlan that’s radically different from the one they live in. By the end of the game, one of their dreams will be realised. It’s nice to spend time in a world where that’s not only certain, but believable.