Out of all the characters recreated in plastic for Hasbro’s first wave of Overwatch action figures, the hands-down, hammers-up best is the super-sized Reinhardt with his gorgeous mech suit and dinner plate-sized shield. The only way it could be better would be if we could see the old man’s pretty face. Oh hi there, San Diego Comic-Con Reinhardt Bundswehr version.

Hasbro hit the jackpot when they secured the licence for Overwatch action figures. Not only does the toymaker have the rights to make figures based on the entire roster of Blizzard’s hero shooter, they also have a well of variant figures based on the game’s bountiful array of cosmetic skins. That means masked Anna and unmasked Reaper from the first wave, which I reviewed earlier this year, aren’t the end-all, be-all. This new version of Reinhardt is posing plastic proof. 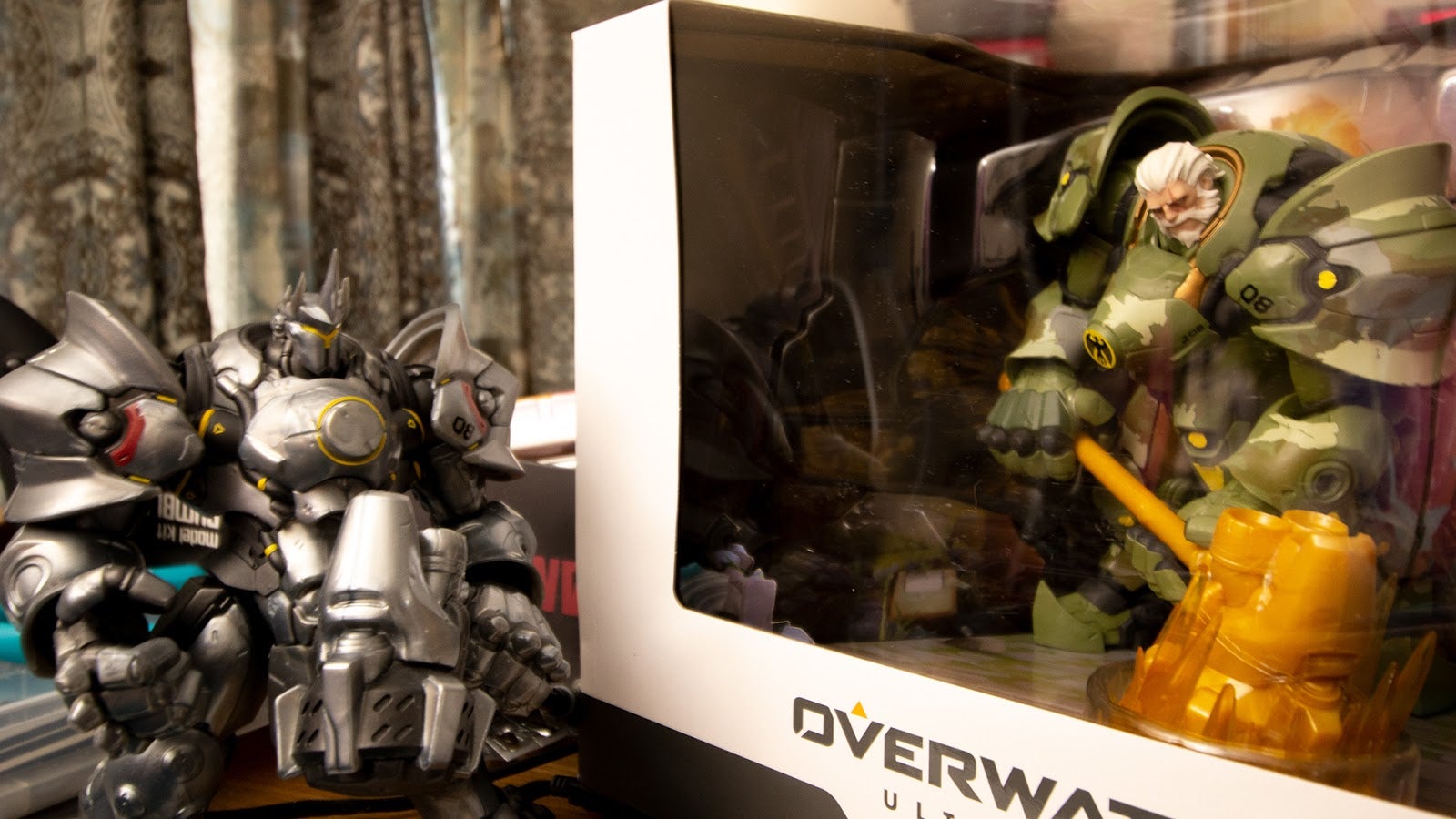 Available exclusively at the Hasbro booth during San Diego Comic-Con, the Bundswehr version of Reinhardt strips the mask off of Overwatch’s best tank, letting the poor old man breathe easy for a bit. The eight-inch tall figure comes packaged in a large box, frozen against a cardboard backdrop of combat chaos. Reinhardt’s hammer, which is gold instead of the silver and grey of the original figure, sports a translucent yellow impact effect. It’s a lovely box, the sort that collectors might want to keep sealed for shelf display. 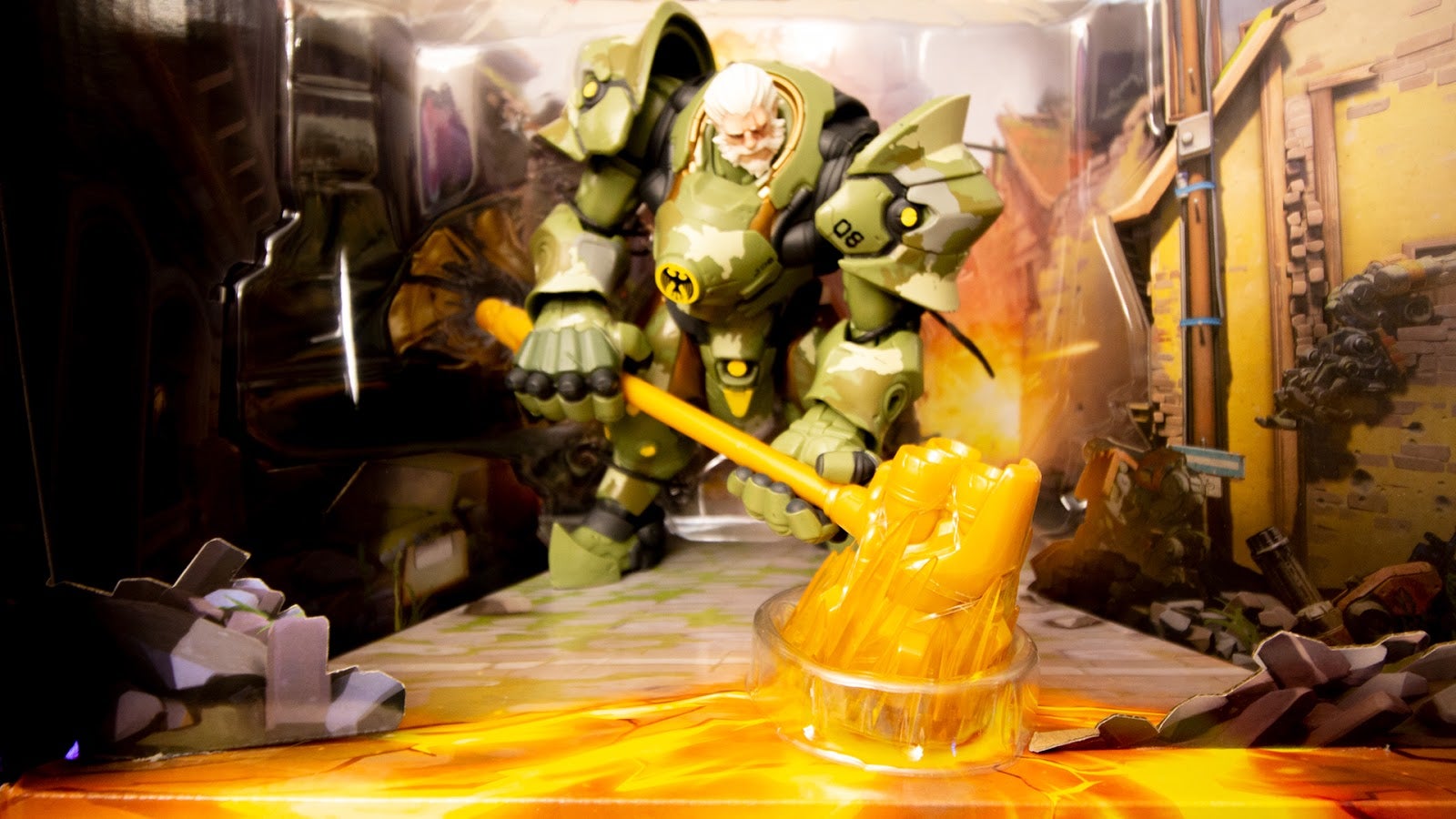 For me, however, a toy is not a toy until I’ve played with it, so I tore open the packaging and grabbed some glamor shots of Herr Wilhelm. Old and scarred with a neatly-trimmed beard and slicked-back hair, the unmasked version of Reinhardt is who I aspire to be when I am slightly older. Just gotta figure out the whole hair thing. 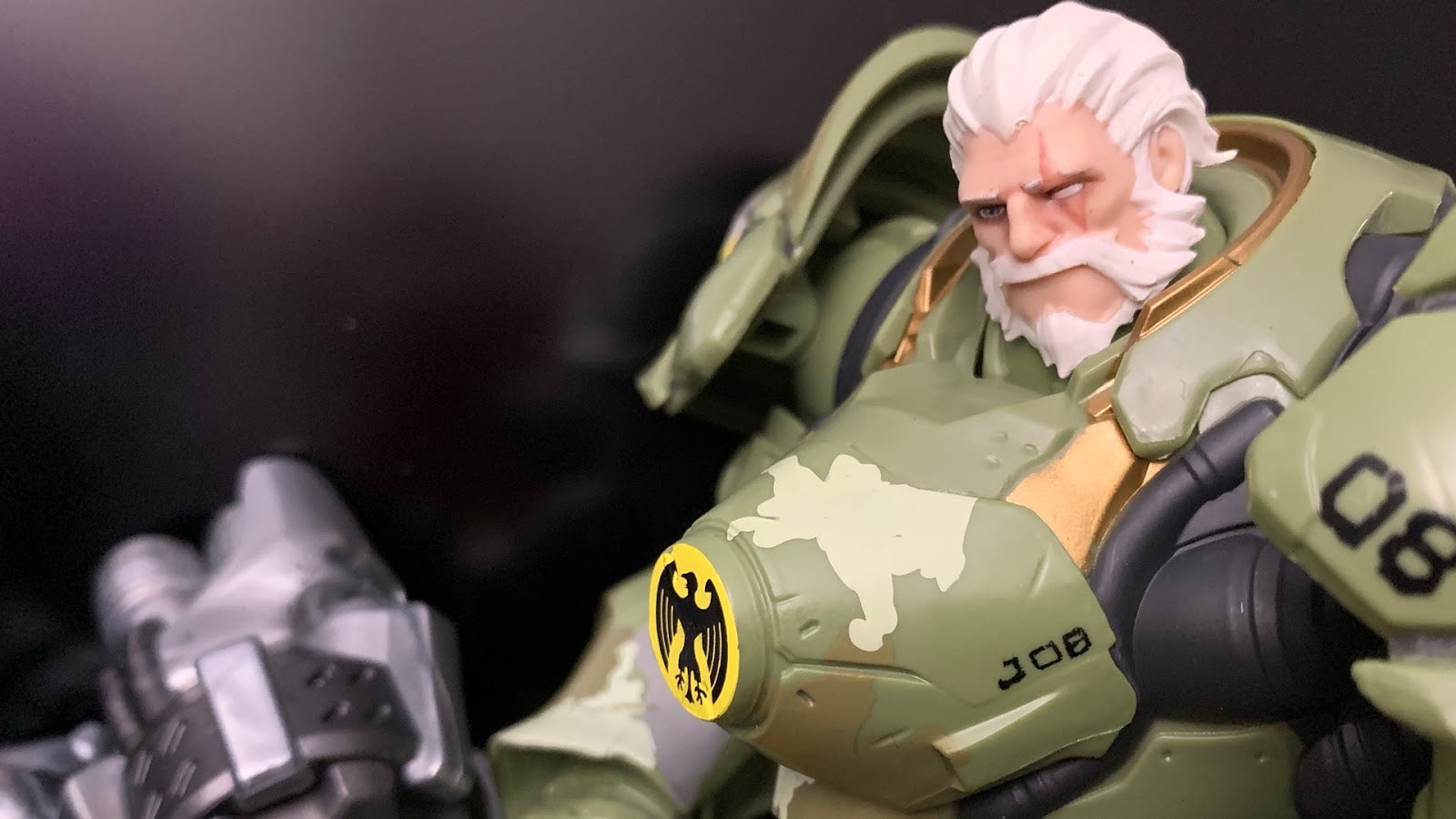 And yes, the package also includes my favourite toy accessory of the year, the microwave-safe platter shield, complete with painted wolf emblem. 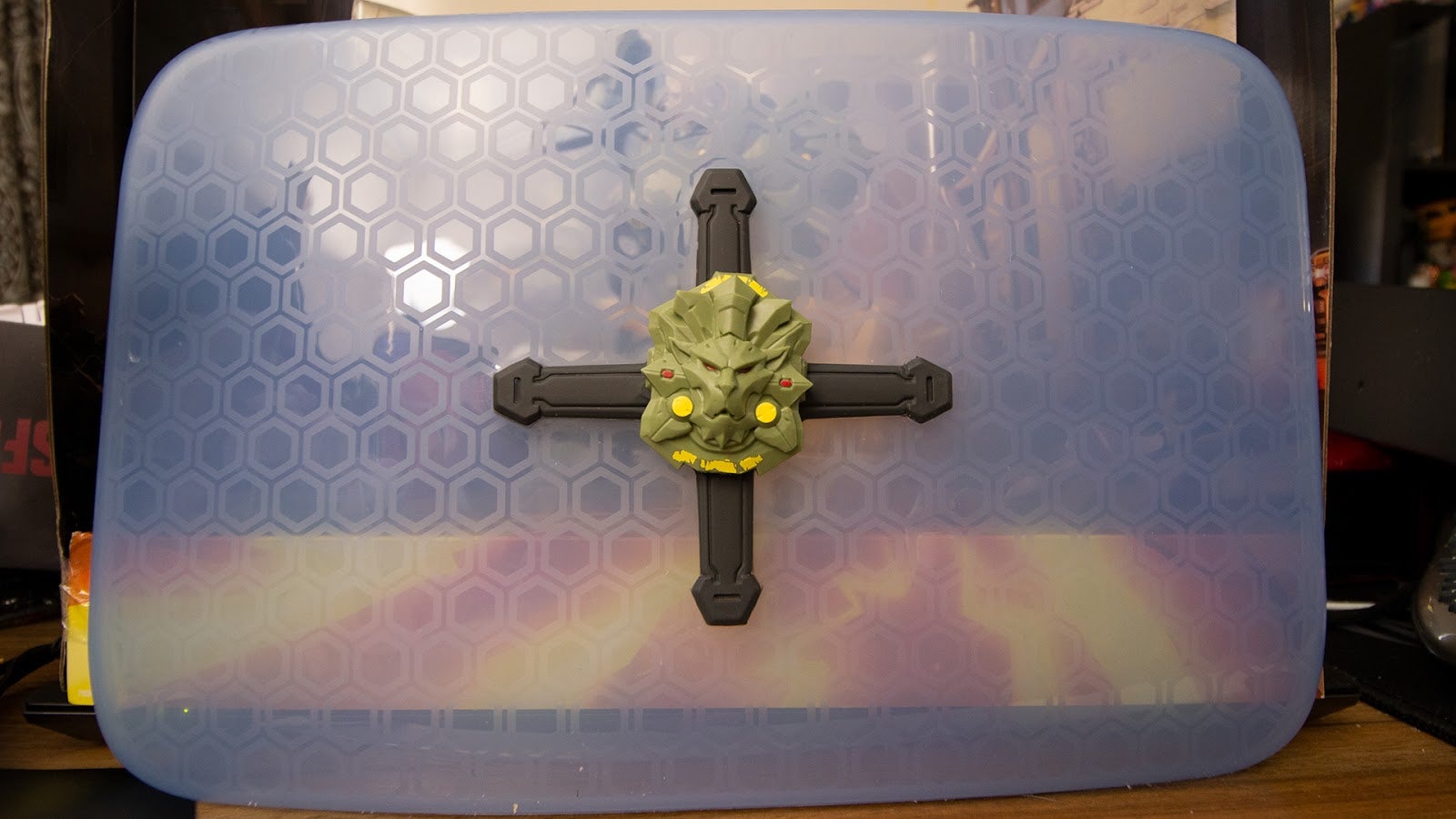 This German military service version of Reinhardt is available at Hasbro’s booth at SDCC for $US60 ($86). I imagine it’s also on eBay, selling for around *checks price* $250. More importantly, he’s a harbinger of things to come in Hasbro’s Overwatch Ultimates figure line. We’re going to be up to our pauldrons in variants, you guys. 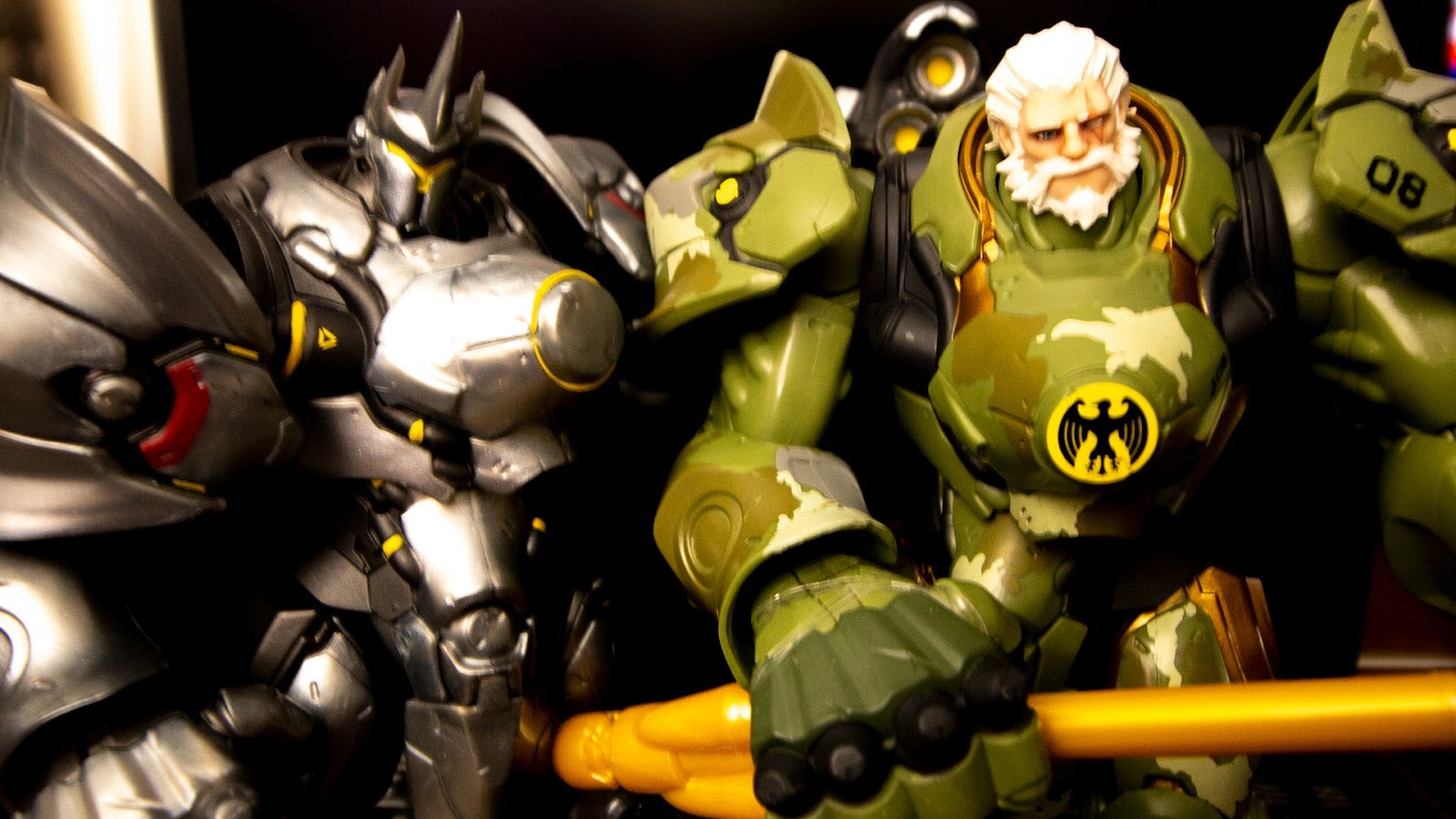