Marvel’s House of X, from writer Jonathan Hickman and artists Pepe Larraz and Marte Gracia, introduces a brave new world for mutantkind — a world where Charles Xavier and Magneto have evolved past their ideological differences in favour of creating a strong, stable support system for the entire world’s mutant population.

The series’ first issue (out this week) spends the bulk of its time setting the stage for the larger story of the mutants’ rise to prominence that’s set to be told in each of Marvel’s “Dawn of X” titles in the coming months. House of X opens on a moody, melodramatic note that leaves you feeling distinctly uneasy about how the X-Men are positioning themselves as a global superpower.

Even though you know you’re meant to be rooting for the mutants, you can’t help but understand why baseline humans would fear them, and the big plan they’ve got to make sure that mutants never feel persecuted or threatened by their baseline counterparts ever again.

Ironically, the X-Men’s latest attempt at ensuring their longterm safety is an expansion of an idea that’s been explored in Marvel’s X-books before. Understanding that it’s the only way mutants could ever truly be safe from governmental persecution, Xavier and the X-Men have established a network of portals connected to an enhanced version of Krakoa, the living island, which the mutants now claim as their sovereign nation and base of operations.

Unlike Magneto’s Genosha and other failed attempts at independent mutant nations before it, the Krakoans are able to assert themselves and be taken seriously on the global stage primarily because of the strategic partnerships they forge with other countries in order to be recognised. In exchange for recognition as a sovereign nation, the Krakoans agree to share access to a trio of new drugs derived from Krakoan flowers that lengthen human lifespans, treat a variety of mental disorders, and help combat antibiotic strains of otherwise treatable, harmful bacteria.

The Stepford Cuckoos explain all of this while giving a group of ambassadors a tour of Krakoa, not because they’re trying to convince them to hop on the mutant bandwagon, but because they’re polite enough to extend the offer and let the humans save face, as if they’d ever consider not taking the drugs. 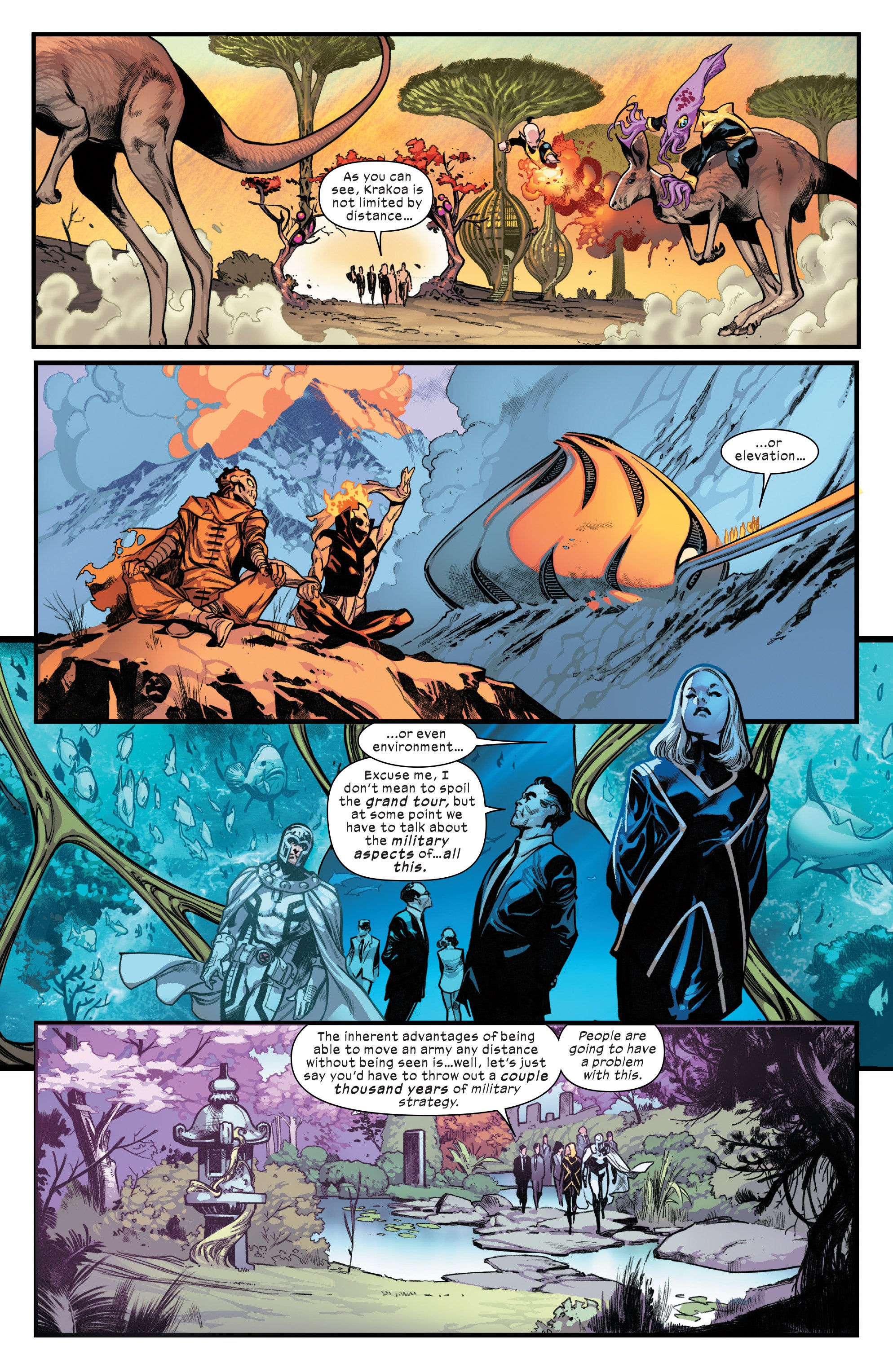 That sort of shrewd diplomacy is exactly the sort of move one would expect from a nation seemingly built on both Xavier and Magneto’s ideals, but it’s also posturing to obfuscate and perhaps downplay the most valuable resource Krakoa has that immediately made it one of the most important nations on the planet: Omega level mutants.

House of X is broken up periodically with internal memos and documents from the various organisations involved in the series’ larger stories that all provide bits and pieces of interesting context for what’s going on. One of these documents, a file of Xavier’s, goes into detail about what Omega levels are exactly and which characters have been officially designated as such.

Xavier’s list includes a number of characters you’d expect to see like Jean Grey, Legion and Vulcan, all of whom are people whose outsized powers have made them world-ending threats at various points during the X-Men’s history. But the list also includes mutants like Storm, Iceman and Elixir, characters whose history of being identified as Omega levels is somewhat more complicated because of the uneven way the classification’s been used in Marvel’s comics in the past.

Chris Claremont, John Romita Jr., and Dan Green first introduced the concept of Omega level/Omega class mutants in Uncanny X-Men #208 in a panel describing Rachel Grey’s powers as being beyond those of an ordinary superpowered person. At the time, the designation didn’t have much significance to it, but it was understood as being a reflection of Rachel’s ability (presumably inherited from her biological parents Jean Grey and Scott Summers) to act as a host for the Phoenix Force, a cosmic entity of such unimaginable power that it typically overwhelms ordinary superbeings.

Over the year more characters would be identified as Omega class, but because there were never any firmly established rules as to what being Omega class entailed, the term lost a certain degree of significance and became a kind of shorthand for describing people with OP power sets. 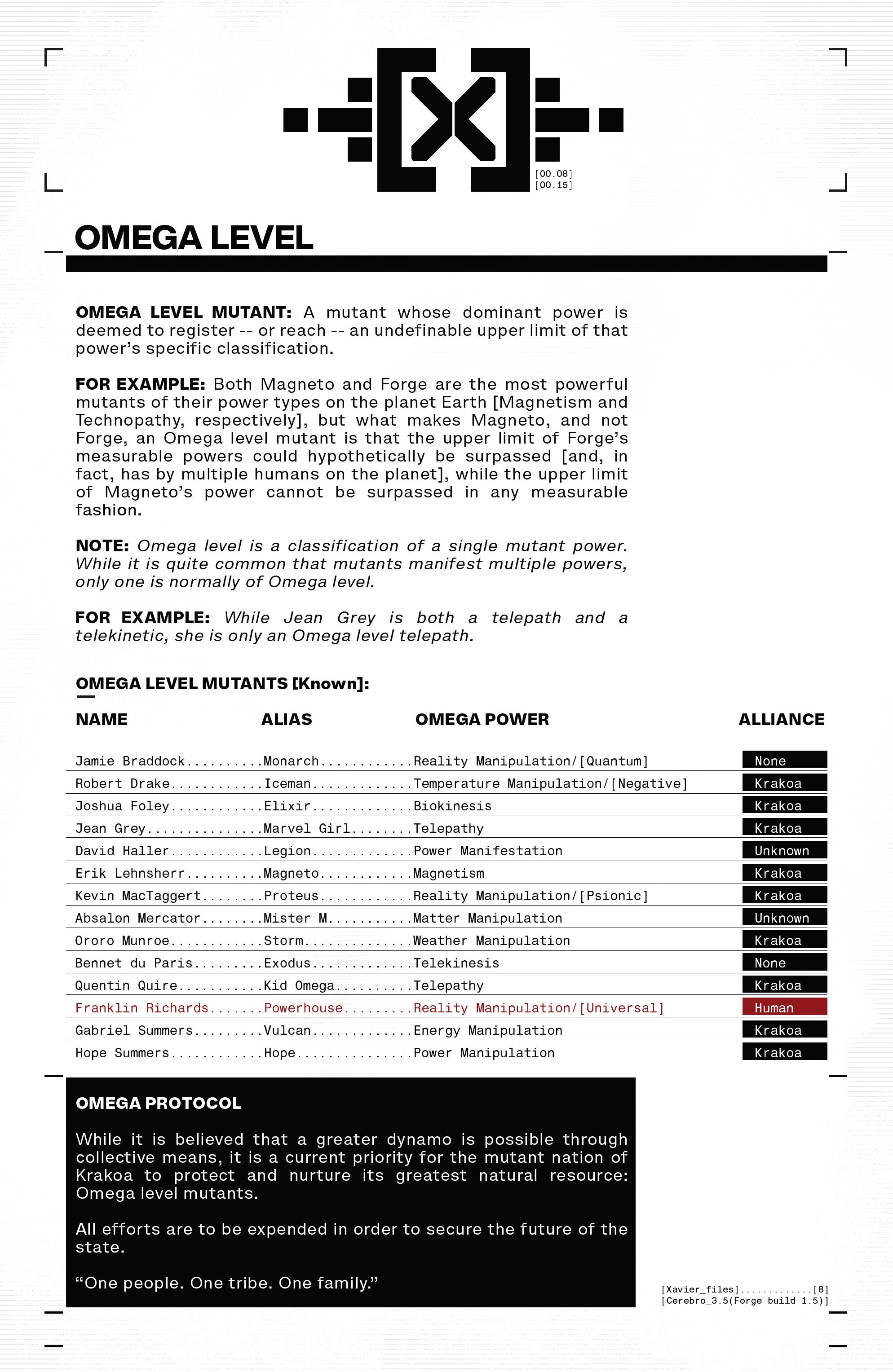 This was further complicated by characters like Iceman and the New Mutant Elixir, originally introduced as a healer, who would eventually be singled out as Omega class despite the fact that their powers have never had the same kind of destructive potential that came to be associated with the term. House of X‘s Xavier file establishes that while many Omega level mutants like Legion, Vulcan, and Mister M do have big, explosive powers, the classification isn’t about the type of abilities, but rather about the person’s lack of an upper limit.

Marvel’s comics are littered with people with variations of the same powers, and what sets Omega levels apart is the fact that there’s really no telling just how far they’re able to push their powers in the right circumstances. Jean Grey might be able to telepathically dance her way around the likes of Professor X and Emma Frost, for example, but she’d stand virtually no chance in taking on Exodus in a strictly telekinetic battle, because his Omega level telekinesis dwarfs hers.

By that same token, Quentin Quire’s destiny to eventually become an avatar of the Phoenix Force has a certain degree of logic to it because of his being an Omega level telepath in the same way Jean is. This has always been strongly implied on the handful of times the topic’s come up in Marvel’s X-books, but having a bit more of the logic at work explained is good because it sets a baseline for X-stories going forward that’s arguably going to make them better.

This may come as a surprise to some, but comics have a tendency to get ridiculous to a fault at times, usually when a power-hungry character begins soliloquising about their plans to gobble up reality or some such.

As counterintuitive as it might seem, stories about people with outsized abilities, even by superhuman standards, benefit from having a defined set of rules its characters are meant to play by because it forces the creative team to justify their decisions. If a character can do anything, they might as well just do nothing from a narrative perspective, because at that point they’ve stopped being a three-dimensional person who has to navigate life.

House of X‘s Omega class clarification doesn’t really limit what all writers and artists will be able to do with Marvel’s mutants in the future, but it does present them with a challenge. Omega class mutants aren’t just a convenient way of introducing characters with all the necessary powers in the world to give a story stakes.

They’re people who’ve been singled out for being truly extraordinary. There are plenty of cryokinetics out there who can build any number of constructs out of ice. But what imaginative things might an Omega level frosty like Iceman be able to do if he properly put his mind to it in a time of need? What can a weather manipulator like Storm do when she’s at the height of her power?

These are the kinds of questions that come to mind whenever someone drops the “O” word, and in House of X‘s wake, the answers should be nothing if not uncannily novel.