How To Use Mario Maker 2’s Tricky ‘Scroll-Stop’ Feature

How’s your Super Mario Maker 2 going? Making some Marios? Trying out some of the cool new features? One of the most subtle but powerful new tricks you can do with the Switch version of Nintendo’s brilliant creation game can really change how you build your Mario levels, but it can be tricky to use.

I’ve been playing lots of Mario Maker 2 since my review, and I still feel strongly about one of my criticisms: This game really needs a detailed manual that explains the ins and outs of all of its features. I think Nintendo wants to encourage a sense of play and discovery. Perhaps, in some cases, this is what happens. But in others, it’s just confusing, and sends you in tears to the Internet trying to figure out your problem. Maybe to this very article.

One of Mario Maker’s best new features isn’t a cunning new enemy or nifty gizmo. It’s the fact that you can make the camera stop scrolling at arbitrary points. In the Wii U or 3DS versions of the game, even if you built a large vertical wall in a level, the camera would keep scrolling to show the player what was on the other side. This limited your ability to separate your level into different “rooms,” or to hide things outside of the player’s cone of vision.

Super Mario Maker 2‘s “scroll stop” feature easily lets you chop your level up into segments. Ironically, by subdividing things into smaller bits, you can actually make your level feel bigger, if you do it right. However, it can be tricky to figure out how to get it to work.

Here’s the basic rule: If you want the screen to stop scrolling in a given direction, you have to put a line of either Terrain or Hard Blocks across the entire level in that direction.

That means it’s probably not going to be enough to just block out a single-screen “room” with walls on all four sides. If the wall doesn’t extend all the way across the level, the scrolling won’t stop.

I say “probably” because there is an exception. In Mario Maker 2, a horizontally-scrolling level is two “screens” tall. (You can tell where the boundaries of a single screen lie by looking at the dark grey lines in the editor.) If you don’t place any objects above the midpoint of the stage, Mario Maker will consider the stage to be only one “screen” tall, and it won’t ever scroll upwards. 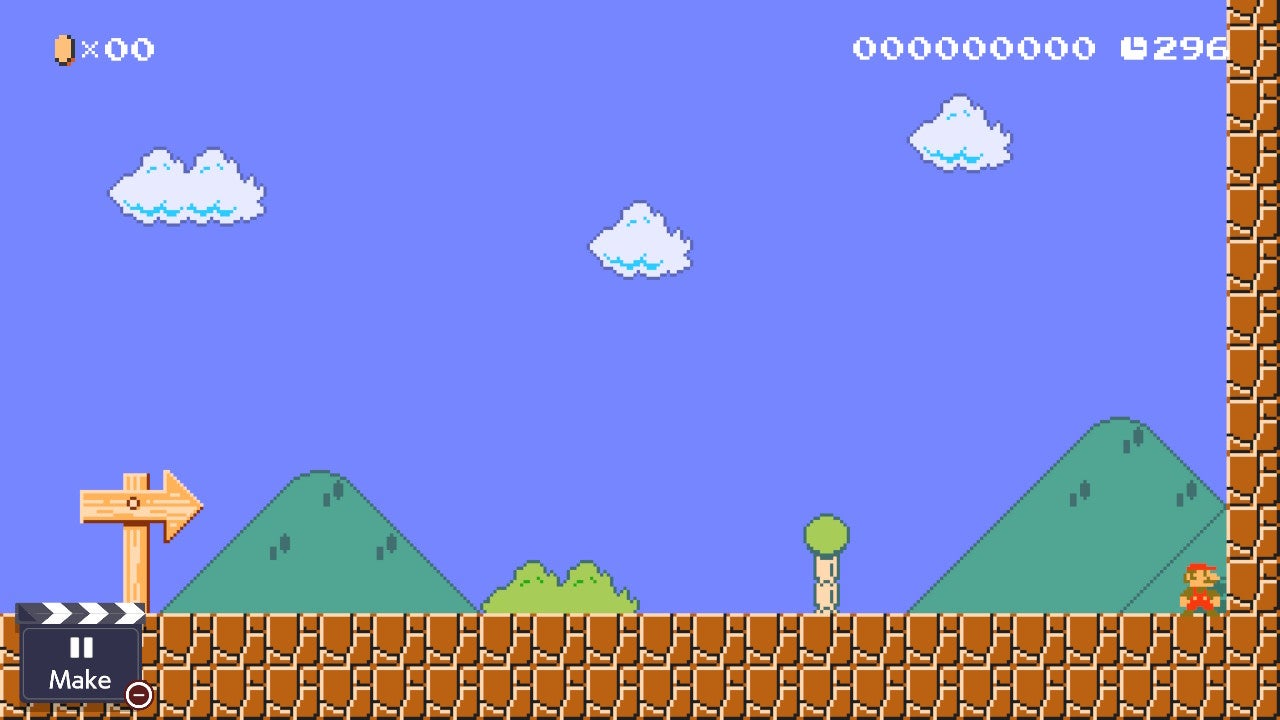 So in this case, that vertical column of blocks at right stops at the top of this screen, but it still blocks Mario’s scrolling. 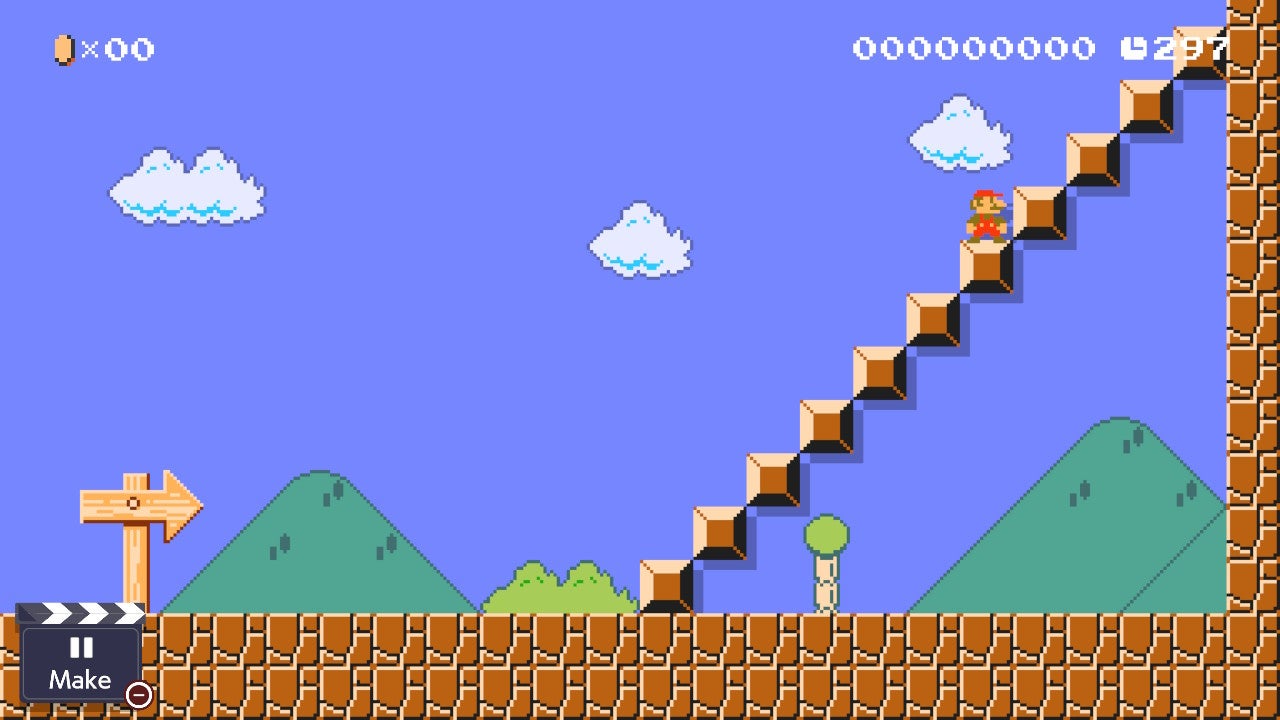 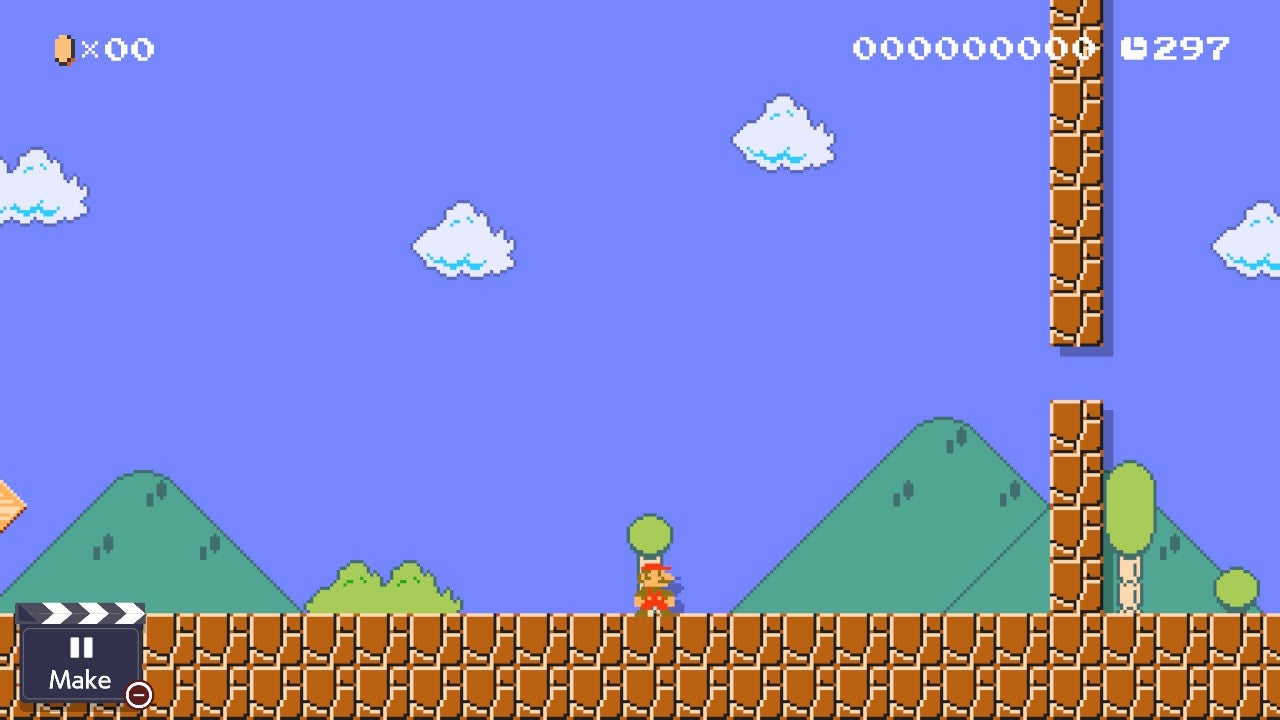 Now, if you were to break that vertical wall at any point, the scroll would no longer lock. When I put a gap in this wall and approach it, you can see that the screen now scrolls past it. That’s obvious, because this is still navigable for Mario. 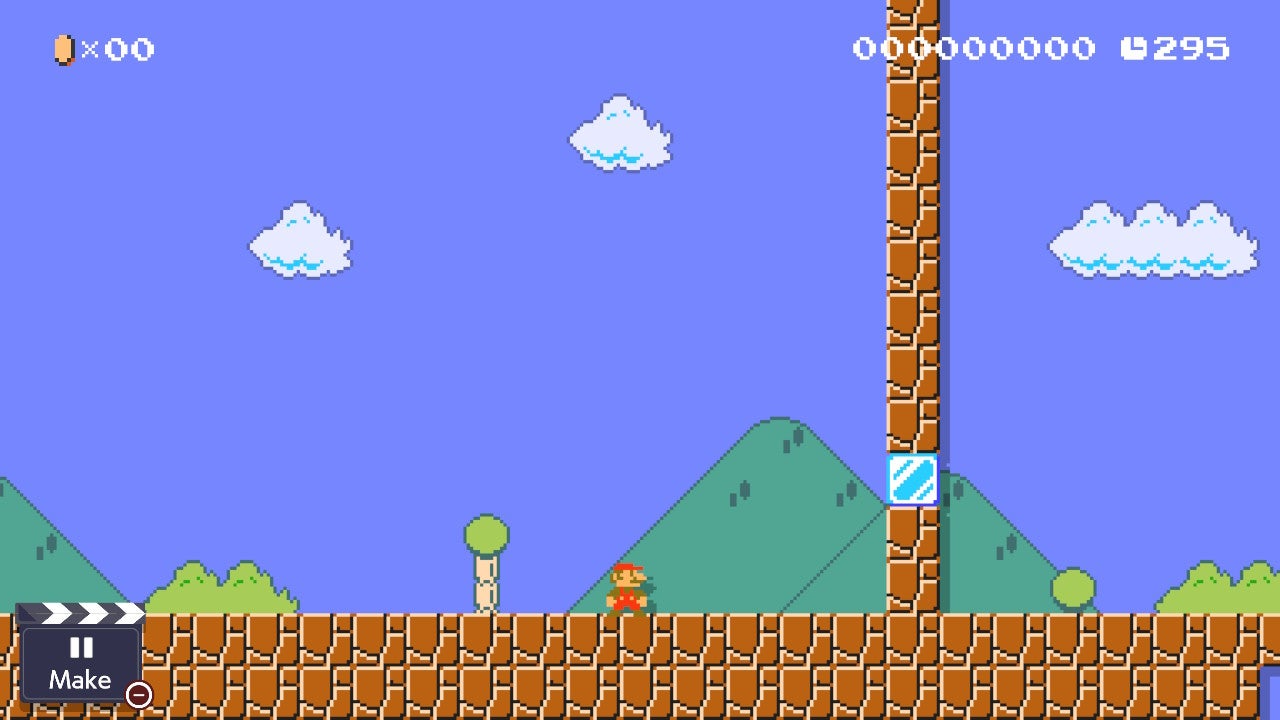 But other types of blocks won’t make the scrolling stop, either, even though Mario can’t get past them. Ice Blocks, Question Blocks, Bricks, et cetera won’t stop the scrolling. 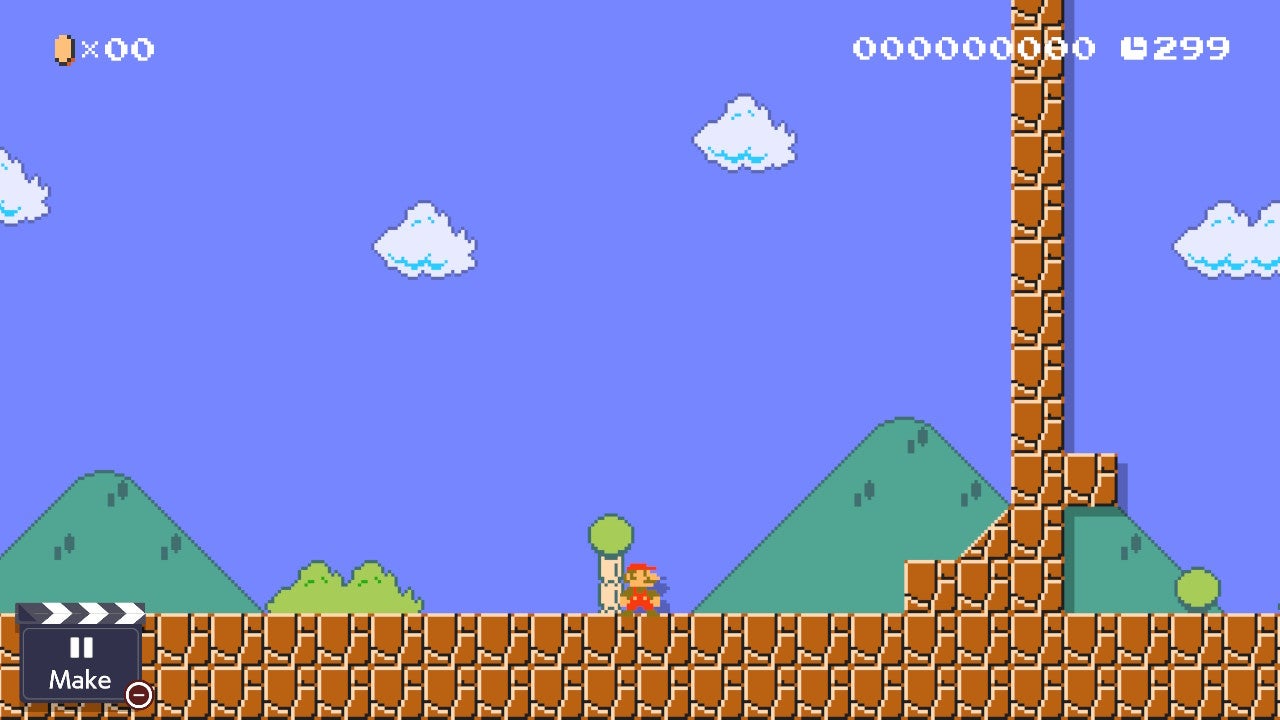 Another thing that occasionally trips people up: Slopes won’t stop the scrolling, either. Even though sloped blocks otherwise look and act like Terrain blocks, the game doesn’t consider a structure to be a vertical wall if it’s intersected by a slope, so the scroll won’t stop. It has to be square blocks all the way down. 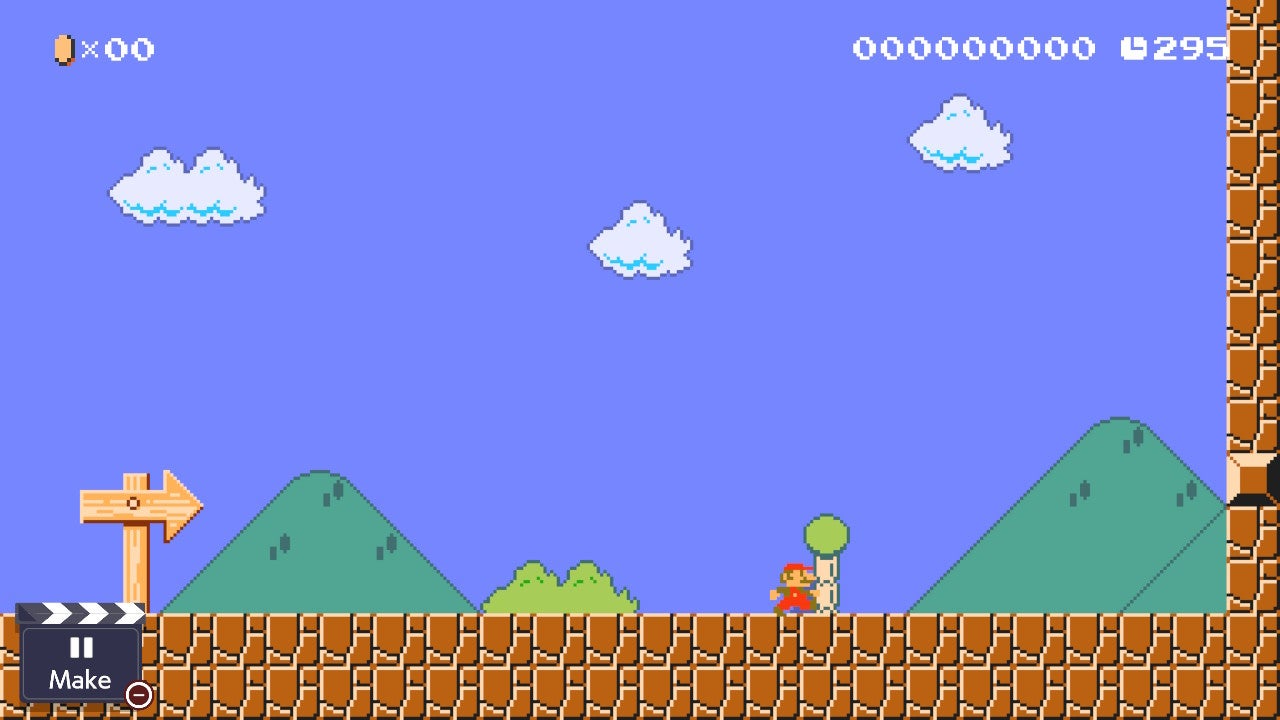 Fortunately, there is one exception to this rule, and it lets you do some cool stuff: Hard blocks! While these are totally indestructible in the original Super Mario Bros., you can destroy them in Mario Maker, but only if the level creator gives you the tools to do it, such as Bob-Ombs or a wearable Spiny shell. 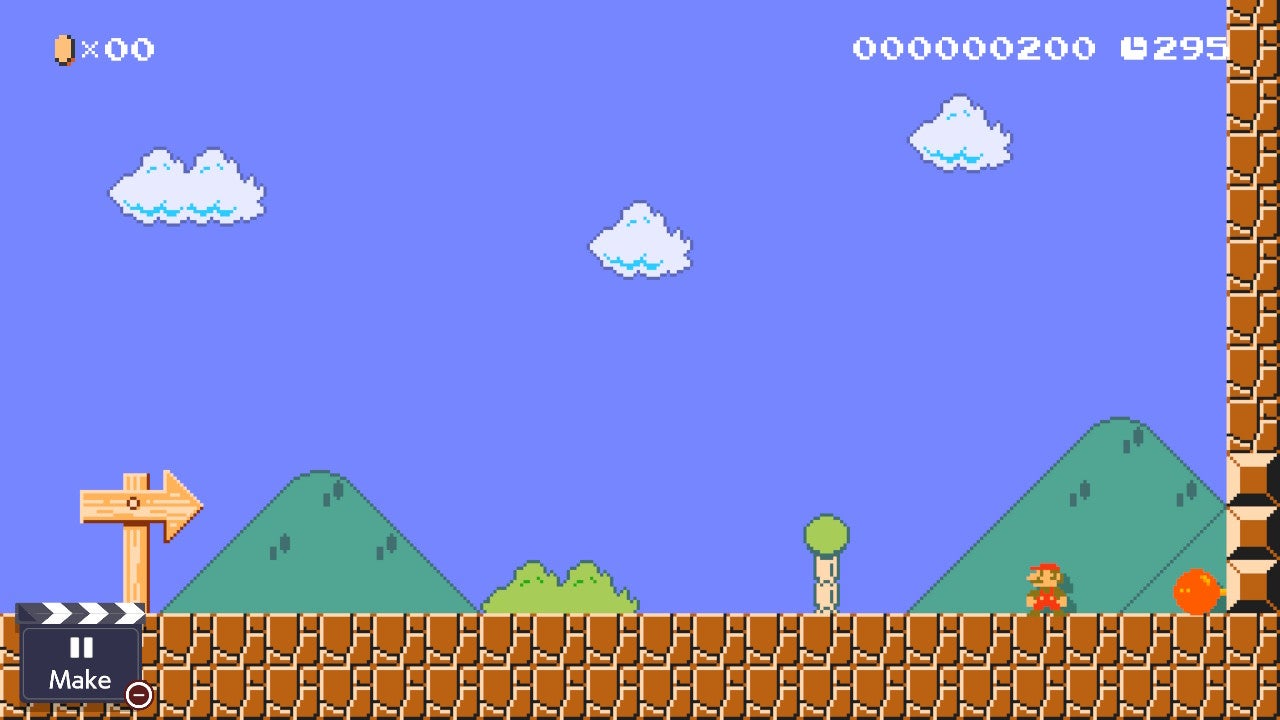 This lets you create what are, in effect, secret rooms! Detonate a Bob-Omb next to the Hard Blocks, and… 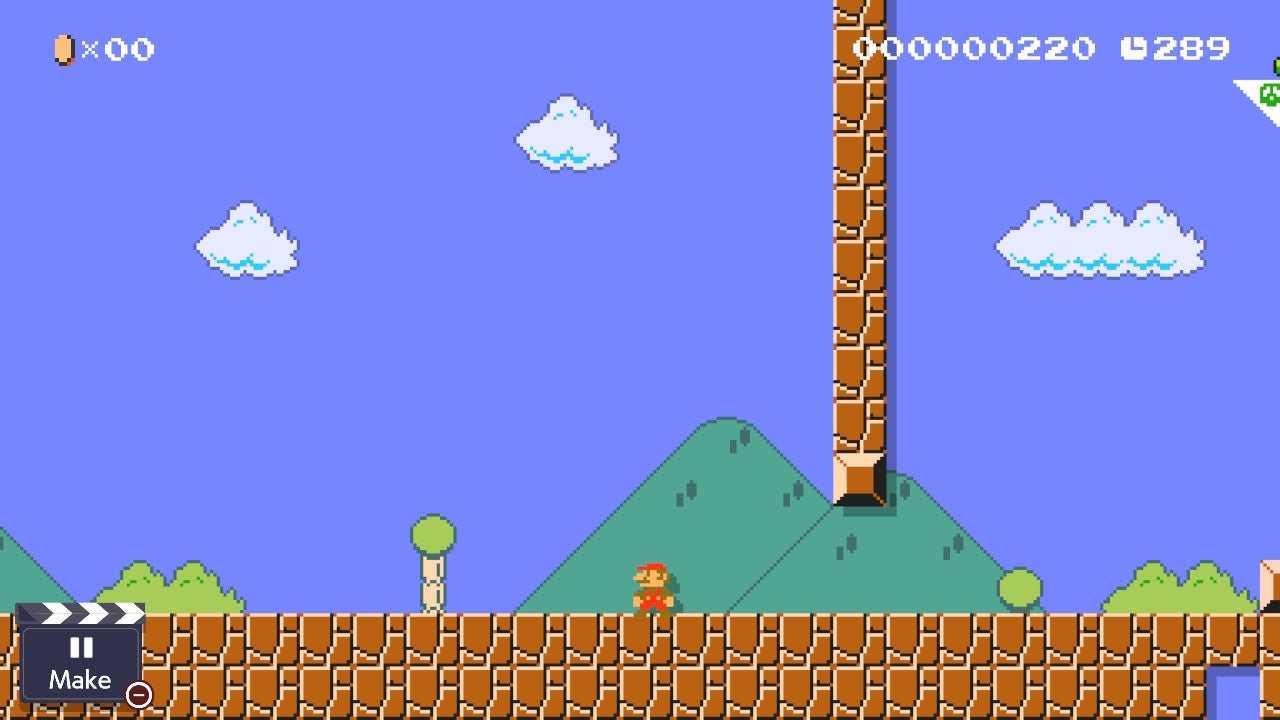 …the screen will start scrolling right after it blows up the blocks, revealing whatever was beyond it.

So far, we’ve just been talking about a vertical line. But it’s also possible to slice a stage the long way, and thus create two horizontal areas that stack on top of each other. To do this, it’s easiest to first scroll the Mario icon up to the top of the level and then fill in the bottom row of bricks (it’ll be the one directly below the dark grey line). But remember, this row has to go all the way across the level: Over the starting area, over the goal post, all the way to the very end. 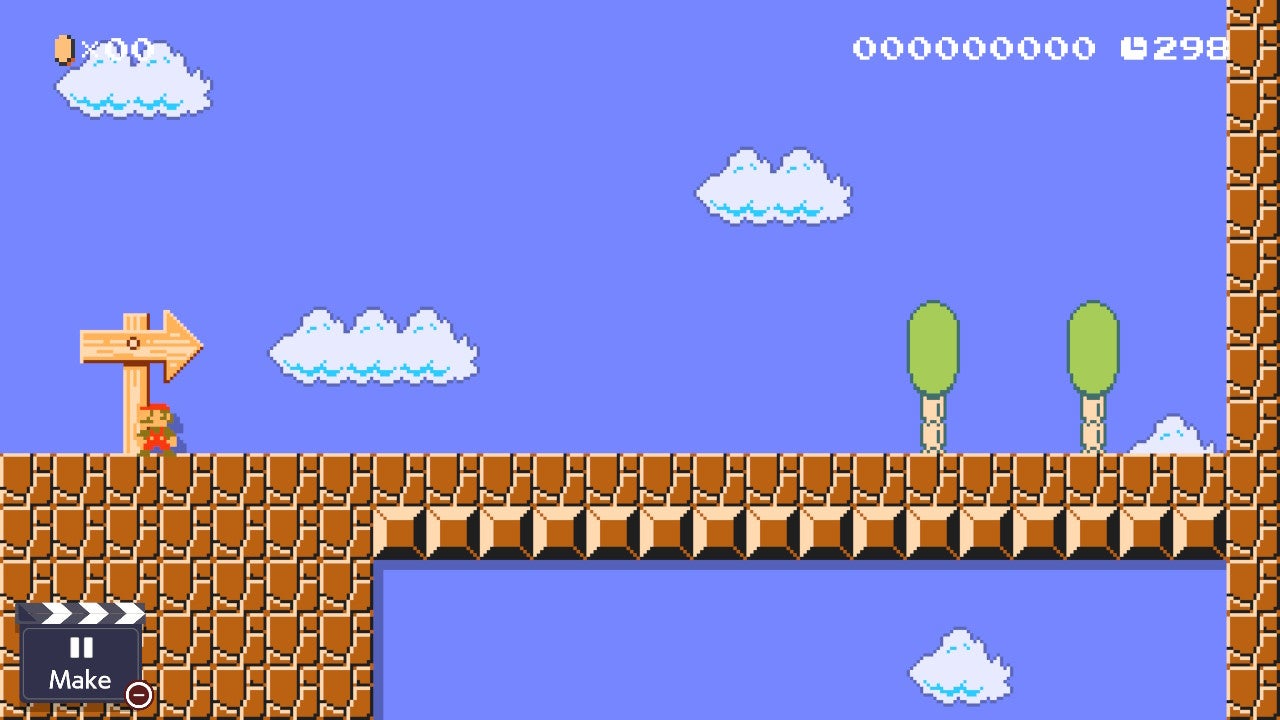 Note that this does not stop the vertical scroll, since the bricks underneath the starting arrow do not count as Terrain. (Screenshot: Kotaku, Nintendo)

Note that the areas underneath the starting zone and the goal posts do not count as terrain blocks, so they will not stop the scroll. The line that blocks the scroll has to be above both the goal and the start.

Finally, almost all of this applies to vertically-oriented levels, too. You can stop the scroll in either direction by creating a line of Terrain, Hard Blocks, or both. The one exception: The rule where a horizontal level won’t scroll upward if nothing exists above the median line doesn’t apply to vertical levels. So even if you only place objects on the left side of a vertical level, the player can still wander over to the right side.

Now that you know how to stop scrolling, let’s talk about the why. You’ve already seen that you could let a player break the scroll stop and discover a secret chamber. You could also make your horizontal level twice as long by splitting it into layers. Another thing that scroll-stopping makes much easier is constructing non-linear levels separated into many rooms.

You can use doors and pipes to send players to arbitrary places all over the map, rather than just have them adventure in a straight line. This can make your level feel much bigger, by letting you design areas that feel very different, or even create an almost Metroidvania (sorry!) style experience. 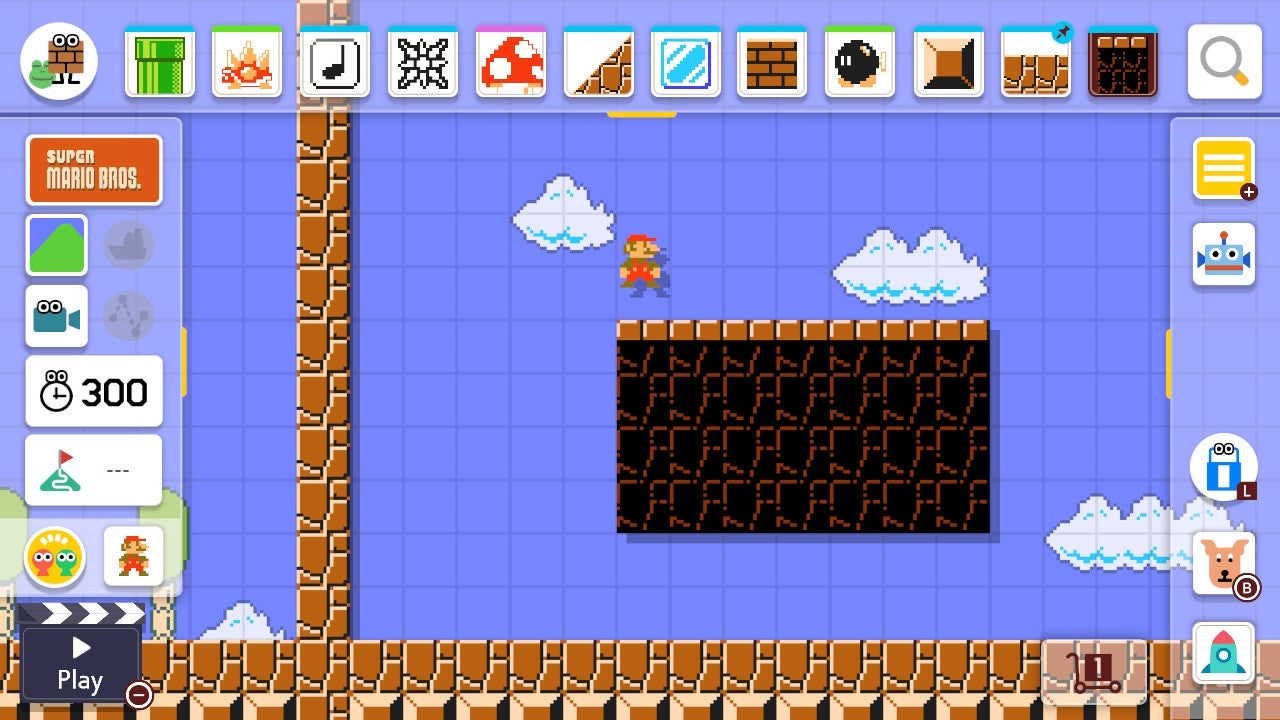 One course part that works very well with subdivided rooms is the Semisolid Platform. This is a platform that Mario can stand on, but that he can also jump through. You can use these in a slightly off-the-books way to create ersatz “backgrounds” that differentiate the look of each individual area. 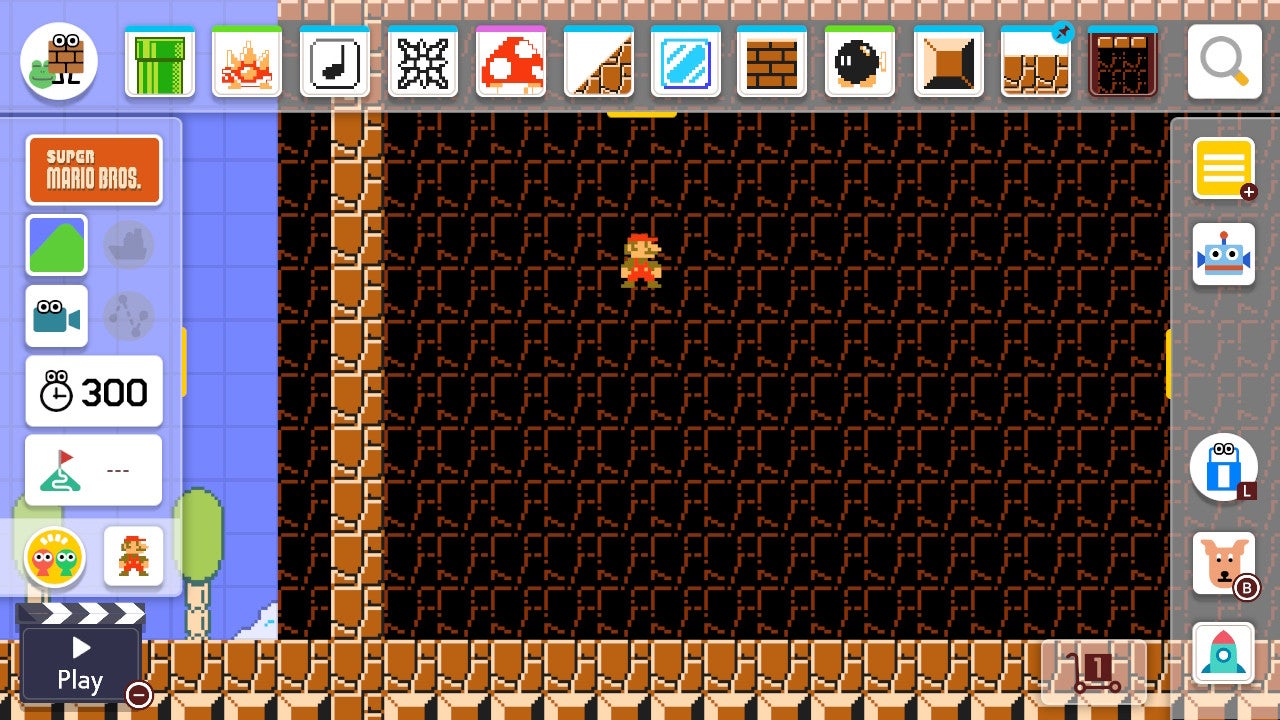 So, for instance, while I can’t create an “underground” area inside of my blue-sky area here, I can stretch out a couple of semisolid platforms and fill in my smaller area with them, creating an area that looks just like a room’s interior. 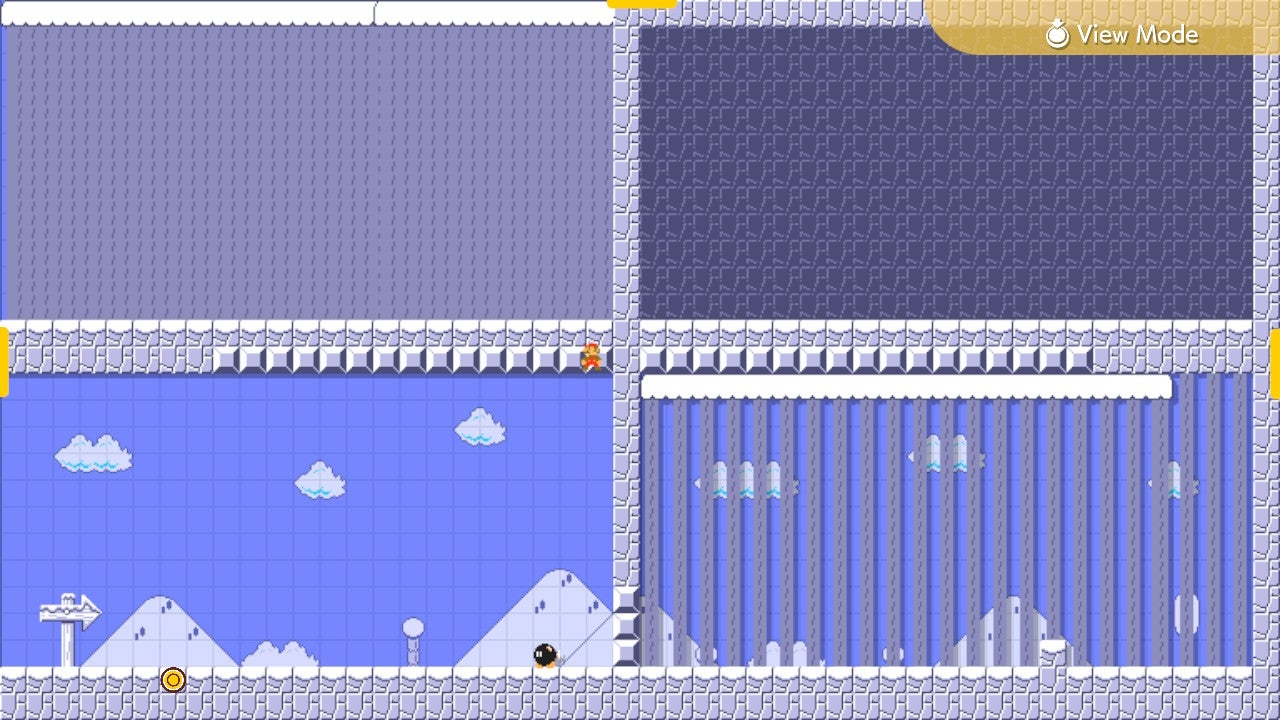 And since every stage “theme” has three different semisolid platform designs, and since you can have two differently-themed areas per level, that means you could have eight very different-looking types of “rooms” in one level! When I’m first designing a level and thinking about where I want the level to take place, I’m always looking at the semisolid platform options for each theme (and even each game type) before I decide. 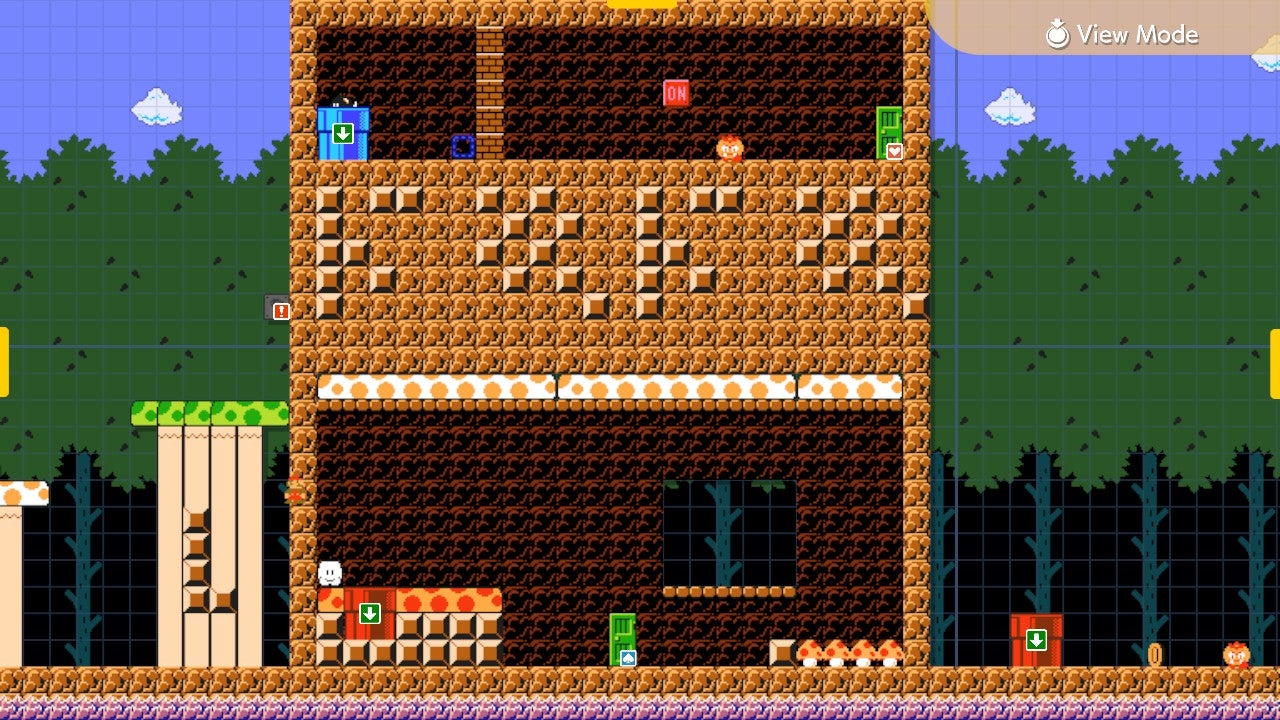 Here’s an example of how this works in action in my level “Dream Factory” (DBP-VYW-KMF). In this one screen, we’re looking at four different, sometimes distantly separated, parts of the stage, even though there’s just a thin line of blocks dividing them.

You start off entering Mario’s “house,” which is the yellow mushroom structure that you can see a small piece of on the far left. Mario’s house is the bottom layer of that central structure. Here’s what it looks like when you play. 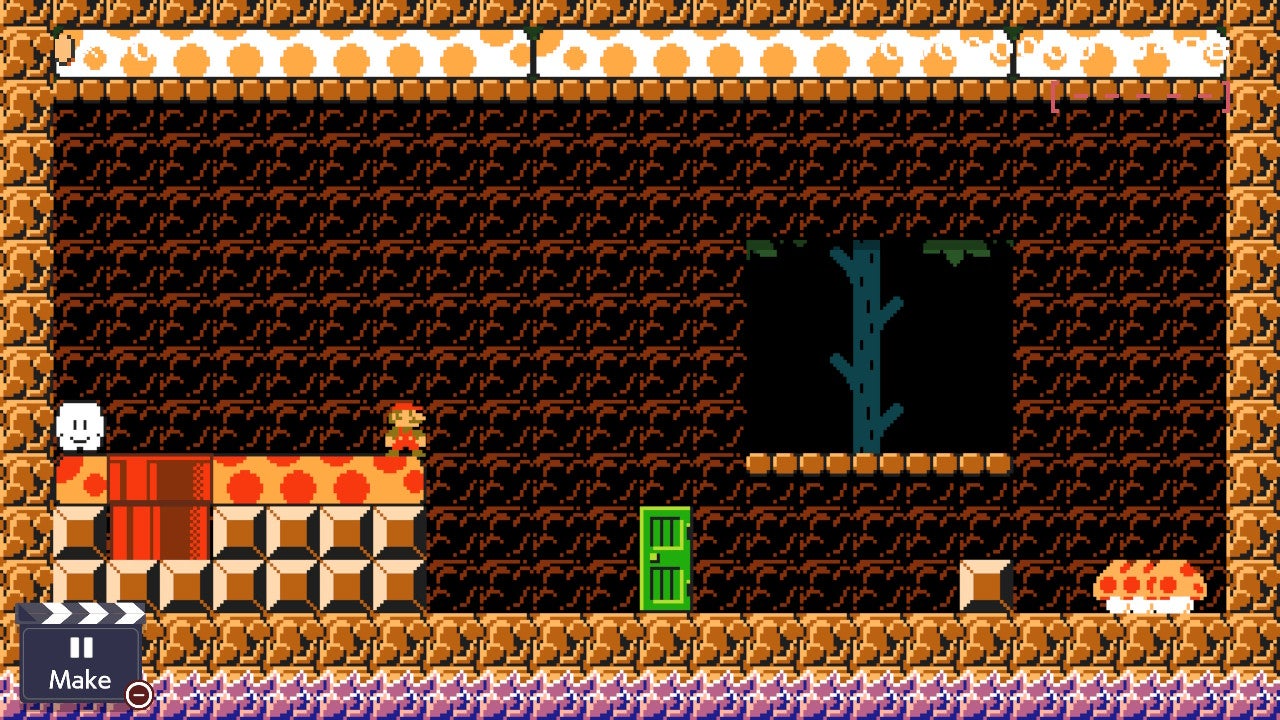 Note the “window” created here by leaving a gap in the Semisolid Platforms. (Screenshot: Kotaku, Nintendo)

The astute among you will have noticed that I did not actually divide the entire play field horizontally with blocks, meaning that there is not actually a scroll-stop on the “ceiling” of Mario’s humble domicile. But there’s also nothing in this room that Mario could use to jump high enough to scroll the screen, so it’s not an issue. 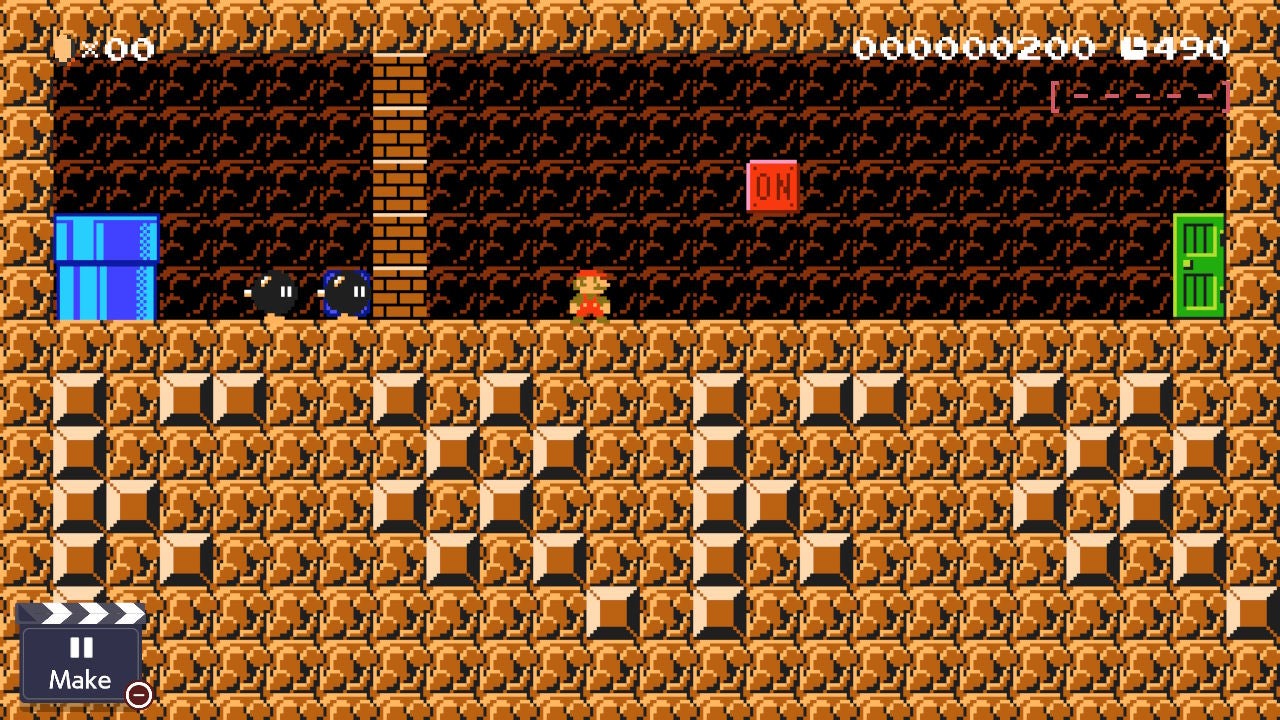 But it does become an issue if you want to build a room on top of it. In this case, if I were to have built a big empty room, the screen would scroll halfway down and show the player that Mario’s bedroom is right below this section, which is buried deep in a “dungeon” segment much later in the level. So in this case I just improvised a kludge of the sort you’d have seen in Mario Maker 1, which didn’t have scroll-stopping: I filled the bottom half of the room with bricks. Since I kept Mario in the center of this room, the scroll won’t go any further down.

But importantly, thanks to scroll-stop, the player has the freedom to move to the left and right in each of these rooms without seeing what lies beyond them, whether it’s a hidden secret or just a different part of the level they’ve already played.

One final note: Just because you can’t see the level doesn’t mean it doesn’t exist. I tested this by putting a Thwomp on the other side of a scroll-stopping vertical wall. As Mario got close to the wall, the scroll stopped and the “room” ended, but the Thwomp still triggered. Caveat factor!