I Feel Nothing From House Of X’s Mutants, And That’s Great

This week, Marvel ushered in a bold new era for the X-Men and mutantkind at large with House of X — part of a new duology under the auspices of Secret Wars and Avengers writer Jonathan Hickman, where mutants have stepped onto the global stage in a major way. But my favourite thing about its debut issue is how tensely unreadable it makes its heroes.

House of X #1 — penned by the aforementioned Hickman, featuring art from Pepe Larraz and Marte Gracia, and lettering from Clayton Cowles — presents a bright new future for mutantkind.

Charles Xavier has returned ascendant, in the process bringing about an island nation, Krakoa, that’s part sentient mutant, part independent nation that all mutants can call home (and are flocking to as a bastion that only they can be accepted on).

Krakoa’s benefits reach far and wide, its bio-organic roots cropping up as living gateways all over the world that only mutants can enter or exit. Any human attempting to traverse one must be accompanied by a mutant, and even then, they must be accepted with the intent that they could do no harm to this glistening safe haven. 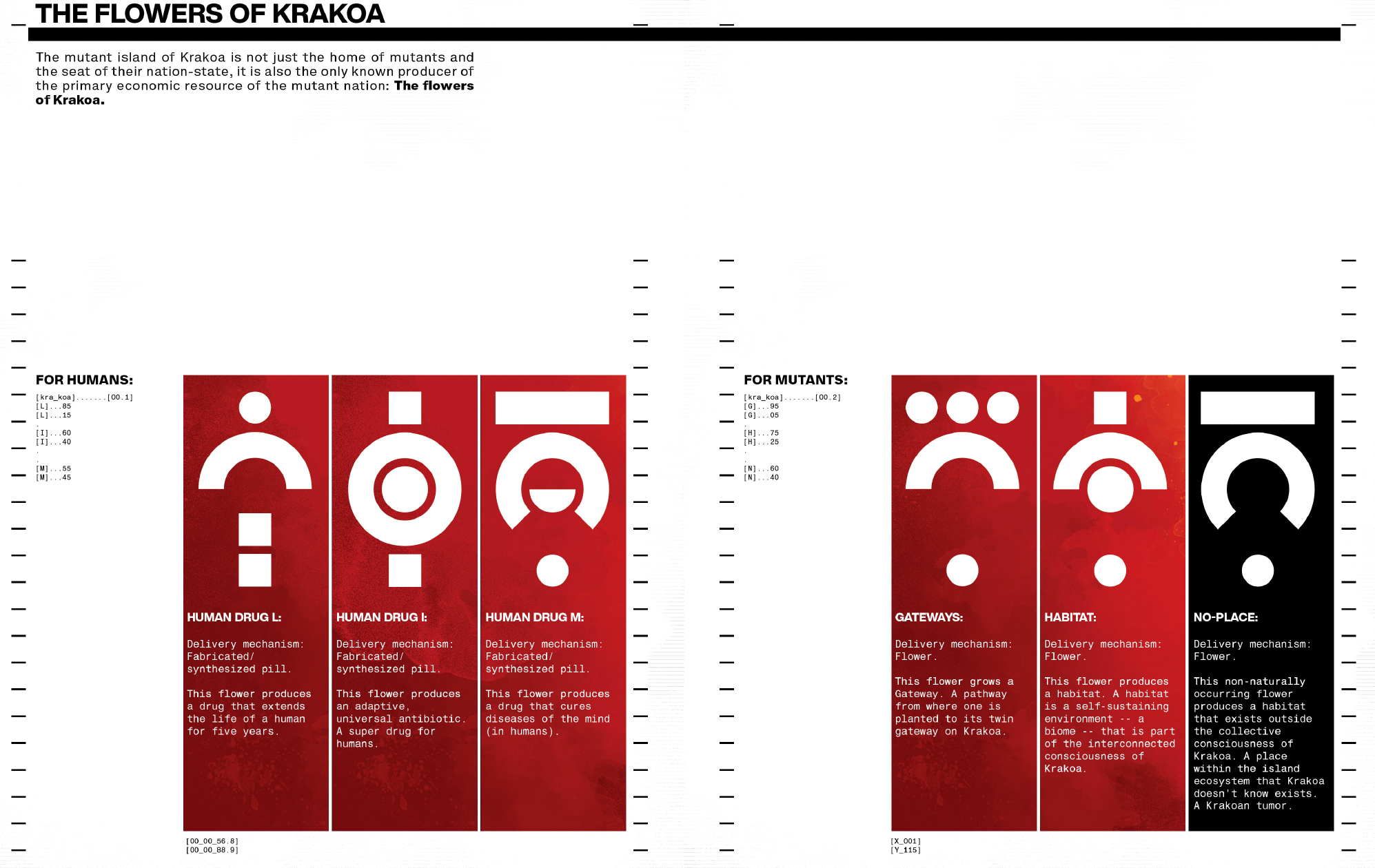 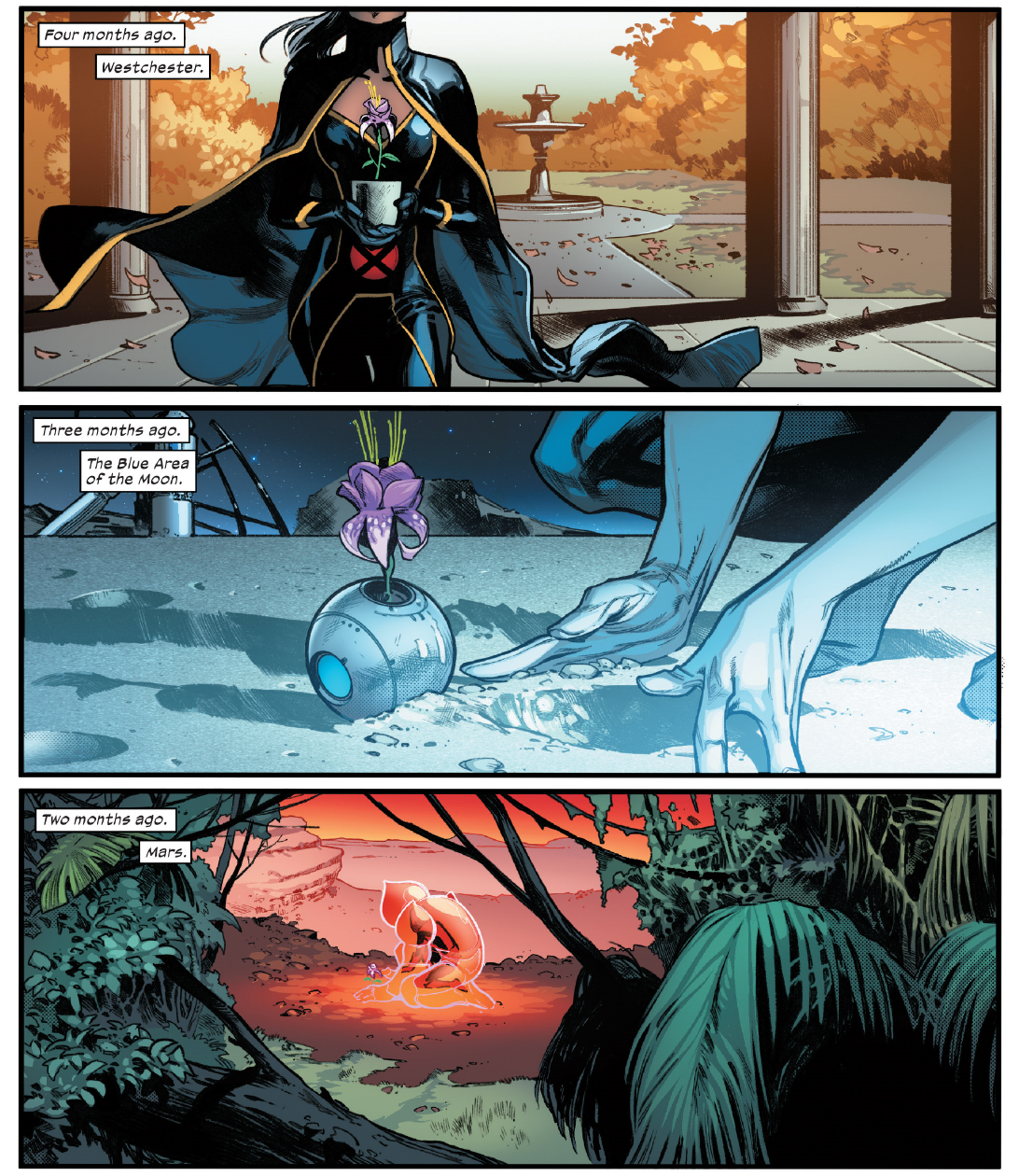 The seeds of Krakoa’s labors are spread far and wide by the X-Men. (Image: Pepe Larraz, Marte Gracia, and Clayton Cowles, Marvel Comics)

That isn’t a failure of the issue. In fact, I love it. Coming to this realisation while reading House of X #1 this week hit me with a tangible sense of unease unlike anything I’ve gotten out of a comic book recently.

In fact, arguably not since the lingering sense of dread woven into the latter days of Hickman’s run on New Avengers, as Earth’s Mightiest Heroes descended down a dark path in an attempt to save all of reality from destruction.

It was a moment of reckoning; I wasn’t really reading just another X-Men event, but something that felt truly alien. But upon noticing that nothingness, that emotional distance, I also realised that it is practically baked into the text of House of X #1 at every level.

From the moment it opens, House of X is enthralled with this idea of keeping its protagonists unreadable.

Charles Xavier stalks over newly-hatched pods of fresh mutants with a smile on his face, a smile we know doesn’t quite reach his eyes even as they are hidden under his new, decidedly Ultimate-Universe-Reed-Richards-esque headgear. In a moment later on, as he psychically greets Jean Grey on her arrival in Krakoa, the same half-smile is there, rendering what should be a happy moment instead disarming.

As familiar faces from X-Men canon are shown dispatching Krakoa’s flowers to bloom into gateways and outposts across the world, Larraz’s framing of them masks their faces.

Kitty Pryde, looking away from our perspective; Storm, cut off by the edge of a panel; only a glimpse the hands of the Stepford Cuckoos planting their flower, which eventually grows into an entire organic building in Jerusalem that acts as an embassy staffed by none other than Magneto himself. The result is that what should be a momentous moment becomes instead cold and clinical.

That clinical feeling even extends into the design work of Muller’s interludes, spartan and detached as they explain everything from a brief guide to notable locations on Krakoa to the exact way to classify an Omega-level mutant.

Even when we can see our heroes interacting with non-mutants, there’s still this lingering unease and falseness.

At one point in the issue, the Fantastic Four apprehend Sabretooth, as he and several other mutants attempt to break out of Damage Control HQ with archives filled with designs from some of Marvel’s brightest minds.

But as they do so, Cyclops emerges from one of the Krakoan gateways to intervene, part of a new policy from Xavier that all mutants, no matter how nefarious, have a right to sanctuary in the new world.

He makes small talk with the Fantastic Four — congratulating Ben on his marriage, welcoming Sue and Reed back to Earth after their long time away — but none of his inquiries feel genuine.

As a divide on how to deal with Sabertooth becomes clear shortly after, and the air between Scott and the Four becomes openly cooler, the only thing that remains even remotely readable from Scott is his unwavering faith in what Charles Xavier offers to mutantkind and humanity alike. 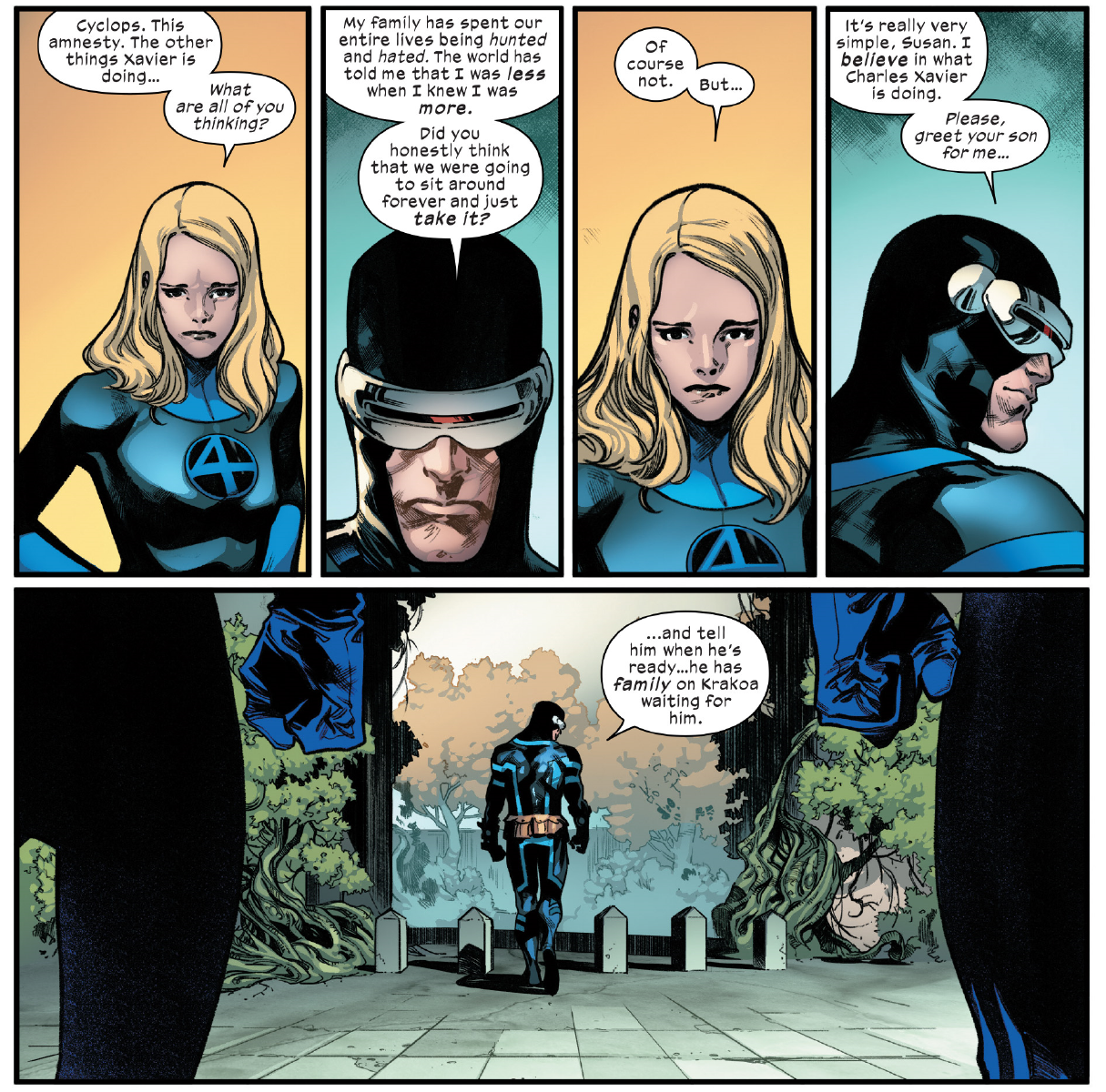 But it also, for the first time in a very long while, makes the X-Men and mutants in general feel truly other. Not just in the thematic, social sense — they’ve been that from the very beginning; the term “Mutant Metaphor” exists for a reason — but alien, and unflinchingly different.

It’s just that now instead of casting aside that difference in the hope of co-operation with humanity, they’re simply asking them to deal with it. 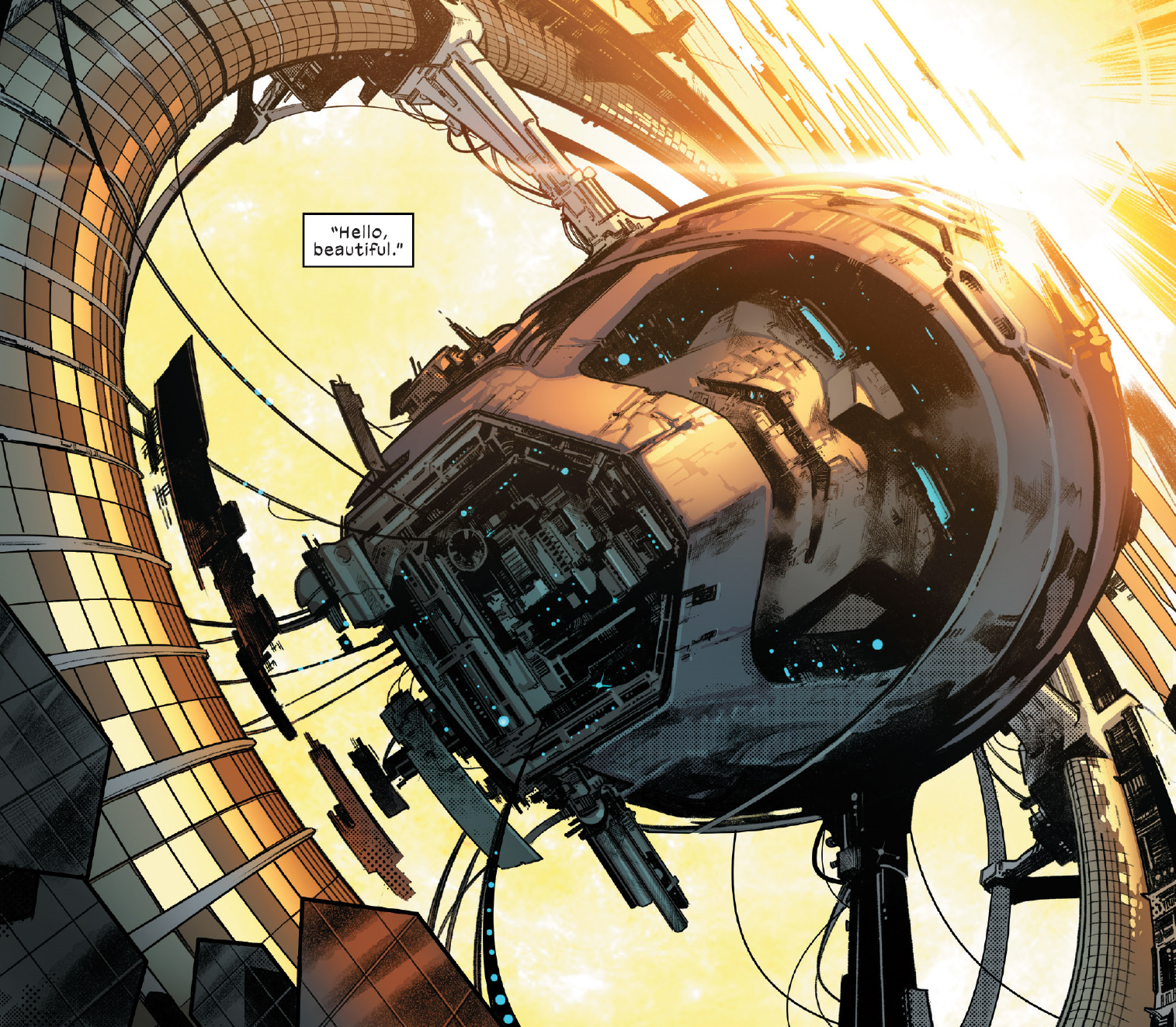 Oh, said space station by the way is built around the head of a Sentinel, because humanity’s paranoia is never not unsubtle. (Image: Pepe Larraz, Marte Gracia, and Clayton Cowles, Marvel Comics)

All that said, there is one moment of earnest mutant feeling in House of X #1, a brief crack where the mask of alien distance splinters, and it is perhaps unsurprising that it falls to Magneto to feel it.

When it’s revealed (thanks to a psychic reading from one of the Cuckoos) that the ambassadors sent to negotiate with him in Krakoa’s Jerusalem embassy are not actually really ambassadors — but instead agents sent on behalf of governments and international agencies with ulterior motives behind parlaying with Krakoa — one of them, secretly a former SHIELD and SWORD agent, draws a handgun.

Magneto, being, well, the master of magnetism, handily disarms him. And as the agent-turned-ambassador cries out that it was all in self-defence, Magneto steps forward and utters a response: 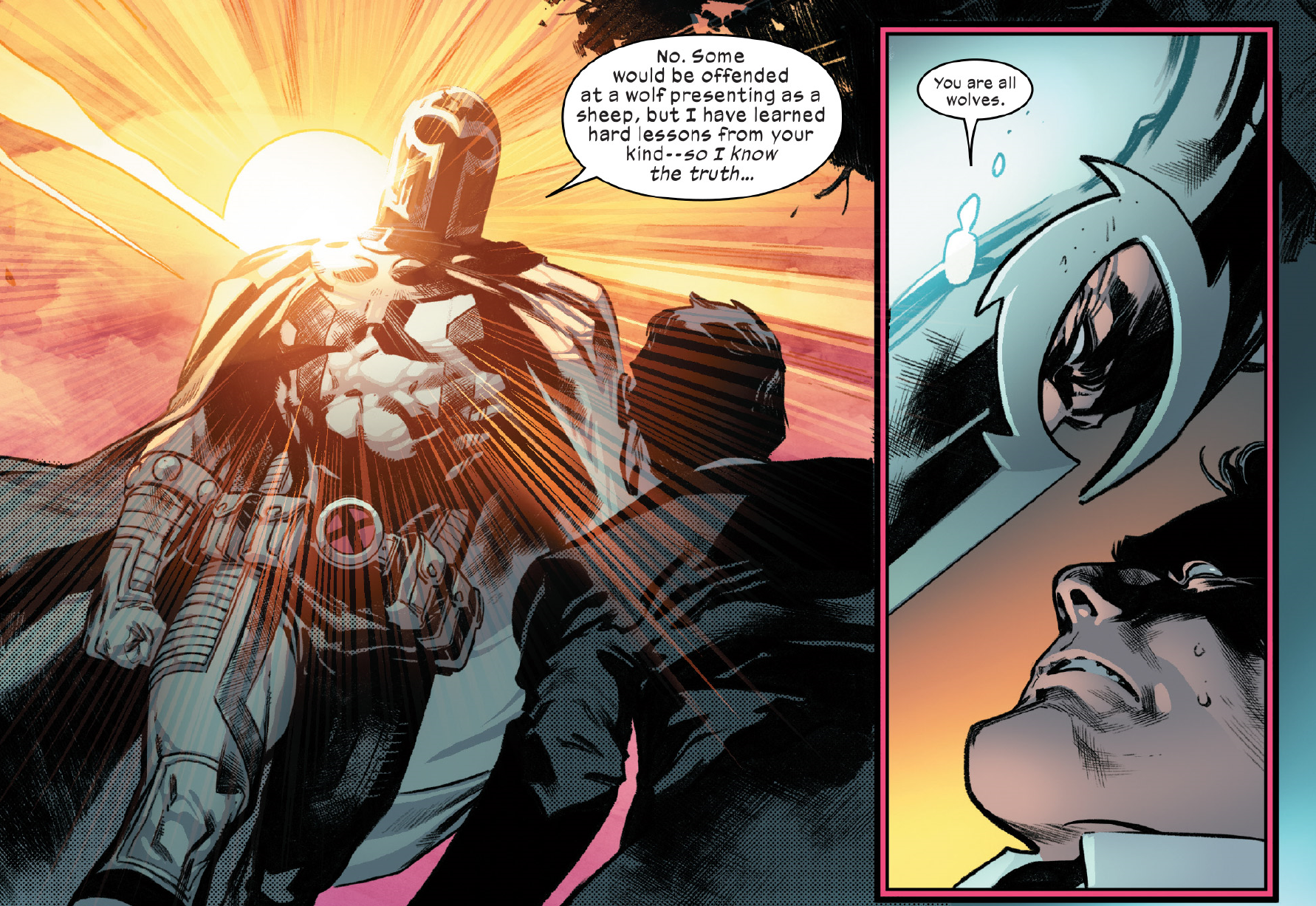 It is brief. It is intimate, compared to the grand scale elsewhere in the issue. Cowles’ lettering becomes minuscule, evocative of a whisper, but almost deceptive in how small it makes Magneto’s words.

But as small as it is, unlike any other mutant interaction in this issue, it is bursting with emotion. Fury. Disdain. Disbelief.

That these are the emotions projected in the only moment the issue lets us know how our mutant heroes truly feel — the moment that Magneto simply revels in feeling — just heightens the sense of alien dread throughout House of X #1 even further.

For decades, Charles Xavier and his X-Men have been trying to tell humanity that mutants are just like them — but House of X serves as a tense, potential-laden reminder that the facade has fallen, and they are anything but. Now homo superior stands truly distant from homo sapiens, and it’s the most excited I’ve been about the status quo of mutantkind for years.