I Wish I Could Play More Wacky Builds In Dota Underlords, But I Like Winning 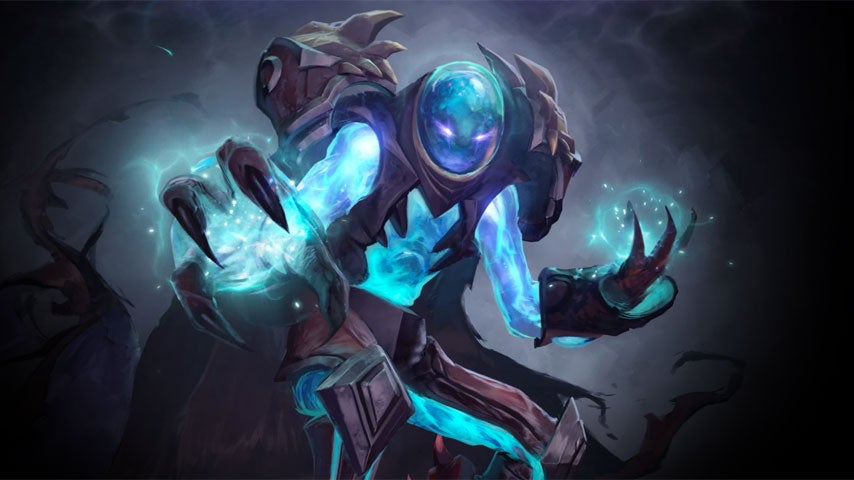 A couple weeks ago, I came across a Dota Underlords video that changed everything for me. In it, a player managed to buff one unit, the self-cloning Arc Warden, such that he was able to spawn nearly limitless copies of himself.


The board was a sea of crackling wizards with fishbowls on their heads. I imagined an old man, years later, gesturing into the dark alley where all of Underlords’ battles take place and saying, “I remember when this was all Arc Wardens, far as the eye could see.” In that moment, I decided I wanted to pull off this overwrought strategy. Problem: It’s not exactly a practical way to win.

Don’t get me wrong: The Arc Warden murder swamp combo is hilariously powerful if you manage to assemble the needed components. This involves picking up another unit, Crystal Maiden, whose ability regularly grants additional mana to all friendly units, allowing them to use their abilities more frequently. You’ll want at least a couple Crystal Maidens and a couple Arc Wardens on the field, ideally.

Then you need to pick up an item called Refresher Orb, which refreshes all ability cooldowns and restores mana. All of these things in conjunction will cause your Arc Wardens to start cloning themselves at a pace so rapid that it’s like they suddenly realised they were approaching their late 30s and only had so much time to make a family, so they decided to do it all right then and there – through mitosis.

The best part? Damage to opponents is based on how many units you have left on the field when you’ve defeated an enemy army, so you put somebody down for the count in a turn or two with this strategy. It is, in the strictest, most serious sense of the term, a ludicrous hootenanny of a time.

It does, however, take time to build up. Arc Wardens rarely appear as a purchasable unit until mid-game, and Crystal Maidens frequently get snapped up by other players because they’re just generally good. This means your early game can be gnarly, and you might still have trouble levelling up your units enough for them to survive and pull off the clone bonanza later on.

As for items, you get to pick from a random selection of them only at the end of certain turns, so your chances of nabbing a Refresher Orb aren’t great. I haven’t seen one at all in several matches, come to think of it. This strategy, in other words, is not a reliable way to win.

It’s fun as heck when it works, but it frequently fizzles out and leads to an endgame in which my Orb-less Wardens and Maidens do all right but ultimately get rolled by combos that scale better in the damage and defence departments.

“Personally, I believe that discovery and experimentation are the most enjoyable elements of games like these—that you should approach each match with the mindset of a mad scientist who doesn’t care which bubbling chemical mixtures blow up in their face. But also, I want to win.”

Most of the time, then, I start matches intending to pursue this fun strat or a number of other off-kilter ideas, only to settle into a familiar, meta-friendly groove. This makes me a little sad.

Personally, I believe that discovery and experimentation are the most enjoyable elements of games like these—that you should approach each match with the mindset of a mad scientist who doesn’t care which bubbling chemical mixtures blow up in their face.

But also, I want to win. The best way to do this is to read about strategies that work and enact them with cold, mechanical rigour. Right now, that’s knights and trolls, or trolls and warlocks, or knights, trolls, and warlocks. Before a recent balance patch, it was warriors and hunters.

These combos are fun, but what they all have in common is that they’re relatively straightforward. When clumped together on the field, knights provide huge defence bonuses while trolls provide big attack bonuses. With their blind spots mutually covered, they trudge out and melt the enemy army like it’s their job, by which I mean, a job they’re perfectly effective at but haven’t been passionate about in years.

They don’t have much in the way of flashy abilities. There’s no storyline or surprise to their victory. They just carve up enemy armies and win. (Warlocks make this a little more interesting, but only a little.) Dota Underlords is still very new, and Valve doesn’t quite have the balance down yet, so when a build is overpowered, it’s WAY overpowered. This means you can do everything right only to come up against a solidly constructed knight/troll build and realise it’s just better.

Meta-friendly units are not hard to come by, nor is there much complicated assembly required. You can enact a variation on this strategy in pretty much any match. It’s fun to do so, as well. The whole point of auto battlers like Dota Underlords is to assert control over RNG chaos.

Slowly but surely, over the course of a match, you go from being powerless in the face of random unit selection to having all the power by way of clever unit purchases and economy management.

You never know for sure that other players aren’t going to luck their way into a come-from-behind victory, but there’s an undeniable high to reaching that point where you’re reasonably certain you’re going to win a match. You did it. You put all the pieces together better than seven other players.

Still, I wish I was better at resisting the meta’s siren song and just going after whatever bizarro build the RNG gods present me with. The other day, I was backseat driving a match a friend was playing, and he got a two-stack of items that buff “brawny” units early in a match.

We decided to just go with the flow and assemble the beefiest army of brawny beef boys this world has ever seen. Did we win? No. But we did all right, and we cracked a lot of dumb jokes, up to and including renaming a unit called Beastmaster “Beefmaster.” I want more moments like that.

But I also like winning. I’m in a constant struggle with my own nature – a beef, if you will, with myself. Perhaps, then, the greatest Beefmaster of all… is me.