For the past two years, Madden games have included story modes about a fictional up-and-coming NFL quarterback named Devin Wade. In Madden 20, you can still play a single-player story about a would-be quarterback, but this time you design him yourself, from his facial features to his strengths on the field. It’s a fun mode for a couple of hours, but it’s just not deep enough.

The story mode in Madden 18 took four years to develop and starred well-known actors such as Moonlight’s Mahershala Ali and Friday Night Lights’ Scott Porter. It took about six hours to complete, and while it had some corny moments, it also had heart.

The shorter follow-up in Madden 19, which came out only a year later (as Madden games must), lacked the care and direction of the first instalment. In Madden 20, the game has taken a turn back to the basics with its new twist on a story campaign.

This solo mode combines some of the sentiment and tone of the initial two story modes with the number-crunching satisfaction of Madden’s classic “Franchise” mode.

This new campaign, titled “Face of the Franchise,” lays some lively narrative groundwork with cutscenes featuring your custom-made character. In the first couple hours of the campaign, he’ll decide between a short list of potential college teams. He assumes he’ll be the starting quarterback at his college of choice, but then another star player cuts in and our hero ends up benched for four years.

In his final year of school, the other quarterback gets injured, and the protagonist finally gets his shot to play. After that, he weathers the NFL scouting combine as an underdog, and then sits for interviews with potential NFL teams. There are fun dialogue choices for those interviews, which in real life supposedly involve questions that range from silly to impossible.

One recruiter in Madden 20 asks, for example: “You’re on a mountain in Alaska on a bus going one hundred miles per hour. Where are you sitting on the bus?” (Your character gets to react to this with amusing confusion.) He then starts his hard-won debut season in the NFL, either as a prized up-and-comer, or as a bottom-tier draft pick, depending on how well you managed to play the game up to that point.

After those first couple hours, the cutscenes disappear, and the rest of your play-through goes similarly to the way any Madden Franchise mode game would — except you have to control a quarterback, rather than some other player position. 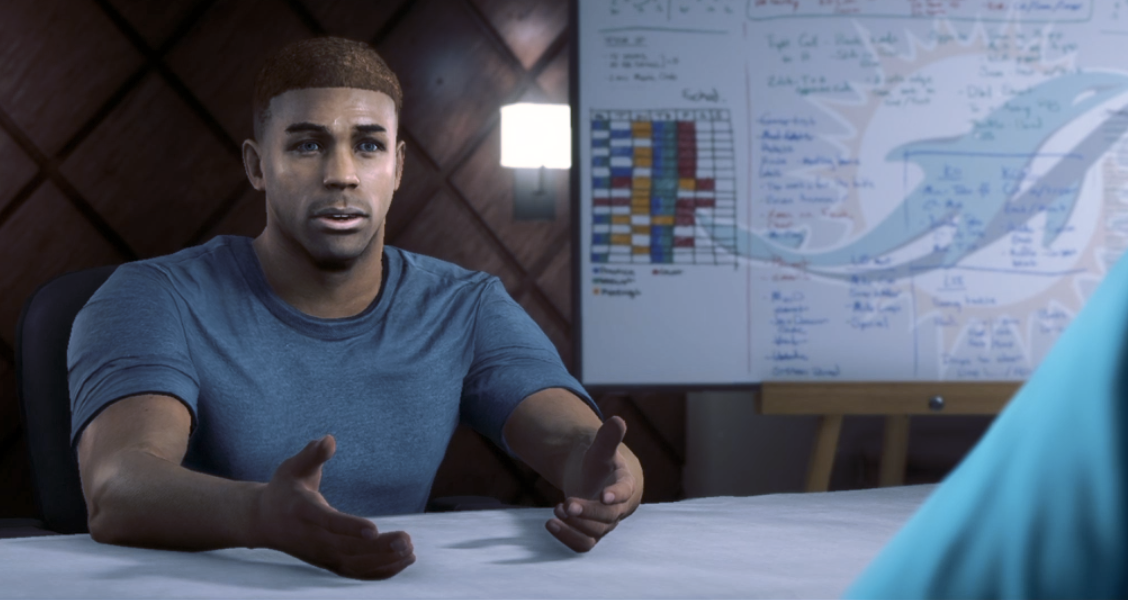 This is my character. I named him Madden Myers.

Face of the Franchise also shows off a couple of new elements in Madden 20. One of them is the Scenario Engine, which is a way for Madden 20’s Franchise mode to pepper some tiny narrative elements into the sidelines of what would otherwise just be a typical season of football game after football game.

In between those games, your star player might get text messages from his coach, his teammates, and even rival players. You’re playing as a fictional guy, but your rivals are football players from real life. So, you can trade trash talk via text message with, for example, NFL player Patrick Mahomes — or whoever your quarterback might be up against that week.

Your teammates will give you shit via text as well. Your receivers might beg you to pass to them more, and you’ll get more experience points if you better accommodate and work with your teammates’ skills. (There isn’t enough to the Scenario Engine parts of the game for me to feel like my player character’s story is actually continuing in any meaningful way. Eventually, I had played for so long that I started to see the same trash talk text messages appearing over and over again.)

In Madden 20, certain players have also been designated as Superstar X-Factor players, which allows their virtual versions to more closely resemble the outstanding abilities that those players have in real life. The X-Factor abilities specifically are passive abilities that are activated if a player is already doing well.

For example, if Patrick Mahomes manages to complete a 30+ yard pass, he’ll get “in the zone.” In his case, that means his maximum throwing distance will increase. As another example, when Cam Newton is “in the zone” — which he’ll enter once he pulls off three rushes in a row at over 10 yards a piece — he’ll then gain his “freight train” ability, which further increases the likelihood that he’ll shake off an oncoming tackle attempt.

These are just more dice rolls on top of the dice rolls that already happen in any Madden game, but they help make certain players feel just a little more exceptional, without the differences being so extreme as to feel unfair.

In the Face of the Franchise mode, you also get to decide which of these special abilities you want your customised quarterback to eventually have, and feed your skill points into the areas that will unlock abilities to fit your play style.

At the beginning of Face of the Franchise, during those couple hours of cutscenes, you also get occasional opportunities to mould your quarterback’s personality through dialogue choices, with some choices giving you more points towards your “leader” attitude, others in “team player,” and still others in the “intense” category (a nice euphemism for “loose cannon”). 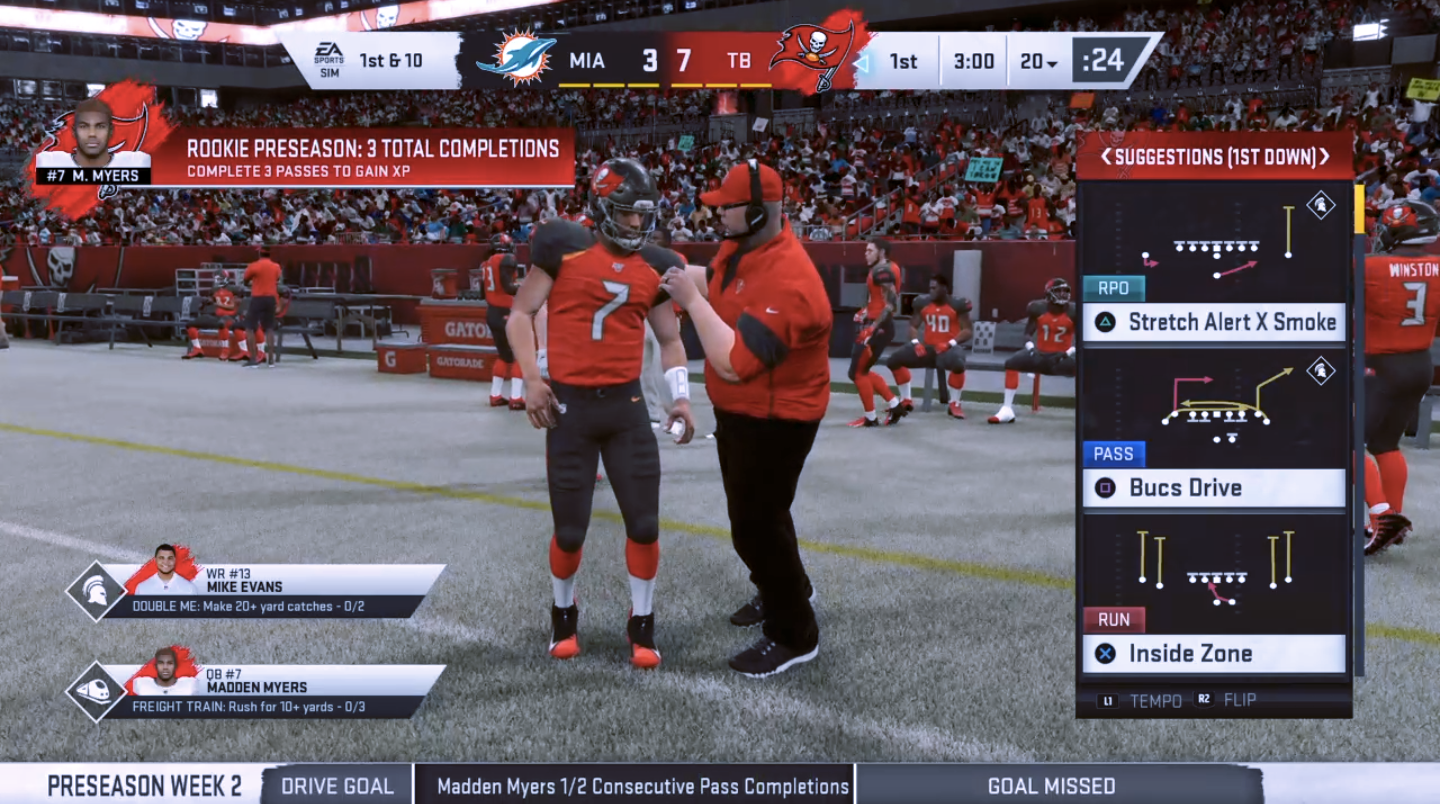 The problem, though, is that the narrative elements of Face of the Franchise are shallow. Picking different dialogue options didn’t seem to have much effect on anything else that happened to me. I played the mode a couple of times to test this out, but there just weren’t that many cutscenes available in total, so there could never be that much variety between what I’d get.

I loved getting to design my own quarterback and have control over his personality, his abilities, and even his appearance. But after offering what appeared to be a whole lot of customisation choices, the story just ended, somewhat unceremoniously, with my player entering a regular NFL season and not having any more cutscenes featuring the personality that I had been trying to craft.

Face of the Franchise set up some good ideas and then, without much fanfare, wrapped them all up and shunted me back into classic Madden.

Madden has never been a story game, exactly, but it is still a role-playing game, so there’s clear potential here for it to have more narrative elements in some of its modes. After Madden 18 and 19, the idea that it could be something like that had started to grow on me.

I’m never going to be a person who cares about the Madden Ultimate Team mode, for example, which is sort of like a collectible card game but with football players (plus it uses loot box-like mechanics, which just don’t appeal to me). I much prefer something like Franchise mode, where I can craft my own team — or, ideally, my own player — and take them on a journey through their football career.

I think Madden 20’s attempt is closer to what most people actually want out of Madden, moreso than the Madden 18 and 19 story modes.

The A-list actors and hours of cutscenes did provide me some entertainment, but they also took Madden 18 and 19 pretty far away from the brass tacks of just playing football games and selecting the best plays and fun abilities to use in any given situation. Madden 20 gets closer to that with this new career mode, but I just wish it had offered a little more than a dusting of narrative.

Maybe Madden 21 will be the game to finally offer the balance of high stakes story and football nitty-gritty.