Shame on Marvel and Hasbro for making me wait so long for a physical representation of one of Goldblum’s most Goldblum-iest roles. His portrayal of Marvel’s cosmic gamemaster was one of the best parts of a Thor movie filled with very good parts. But we didn’t get a figure right when the movie came out, so I had feared we never would. Turns out Hasbro was just saving the best for Marvel’s 80th anniversary celebration.

The six-inch Grandmaster figure made its debut this past weekend at San Diego Comic-Con, part of a two-pack with Benecio Del Toro’s Collector from Guardians of the Galaxy. The team-up makes sense.

Both The Collector and Grandmaster are members of The Elders of the Universe, cosmic supervillains of immense power. They’re basically brothers. The duo would make for an outstanding buddy comedy if one of them weren’t dead. 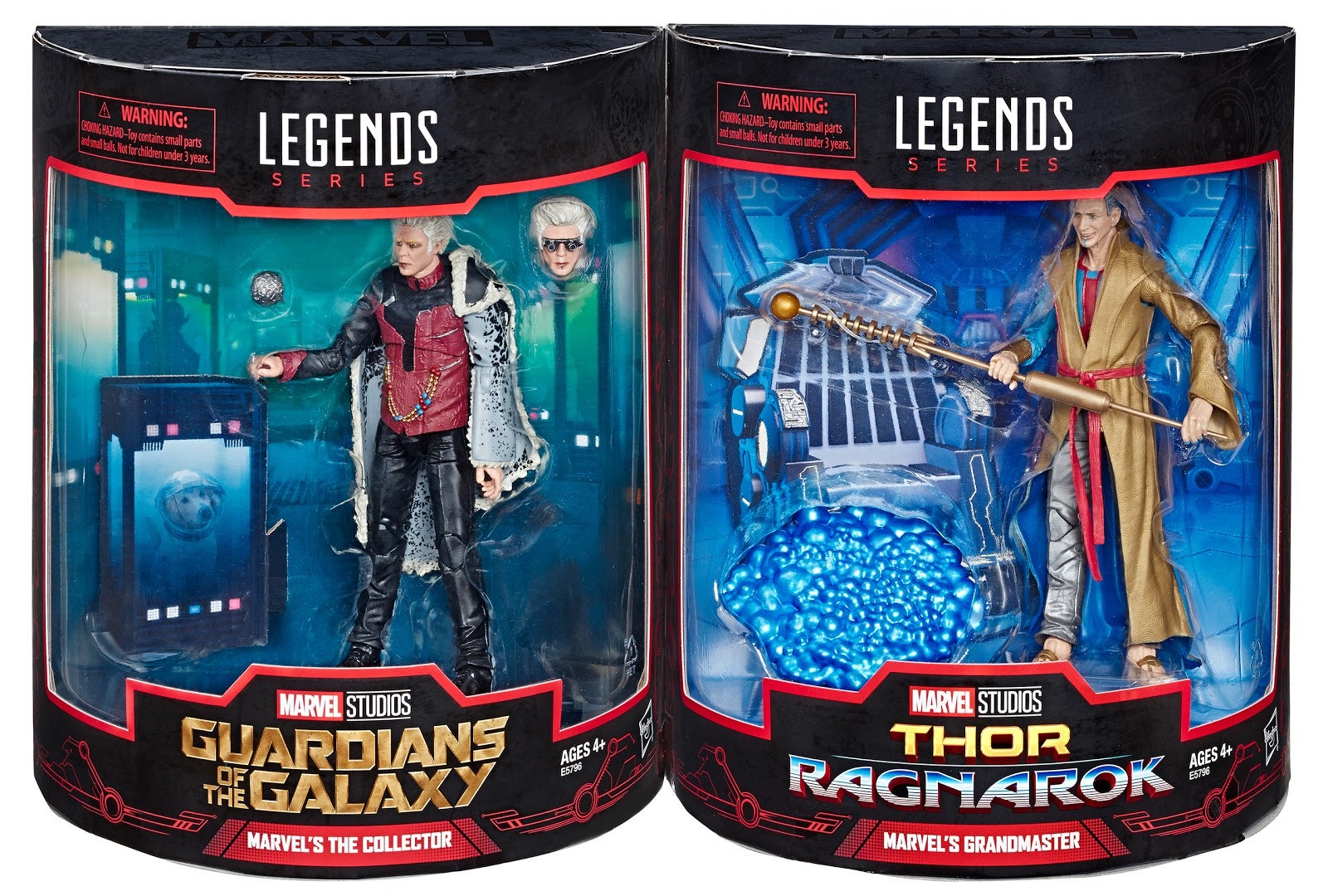 The Collector comes with an alternate head, a container for an Infinity Stone, and a cardboard cutout of Cosmo the Spacedog, but he’s not important right now. This is about Jeff, with his sultry makeup, cardboard throne, cosmic staff, and a bubbling blue puddle representing a disciplined (read: melted) subject.

The packaging is pretty sweet; it’s two half-cylinders that come together to form a whole. It makes for an awesome display piece, which I tore apart viciously because I am a monster who plays with toys. Plus that was the only way to get the full Goldblum effect. 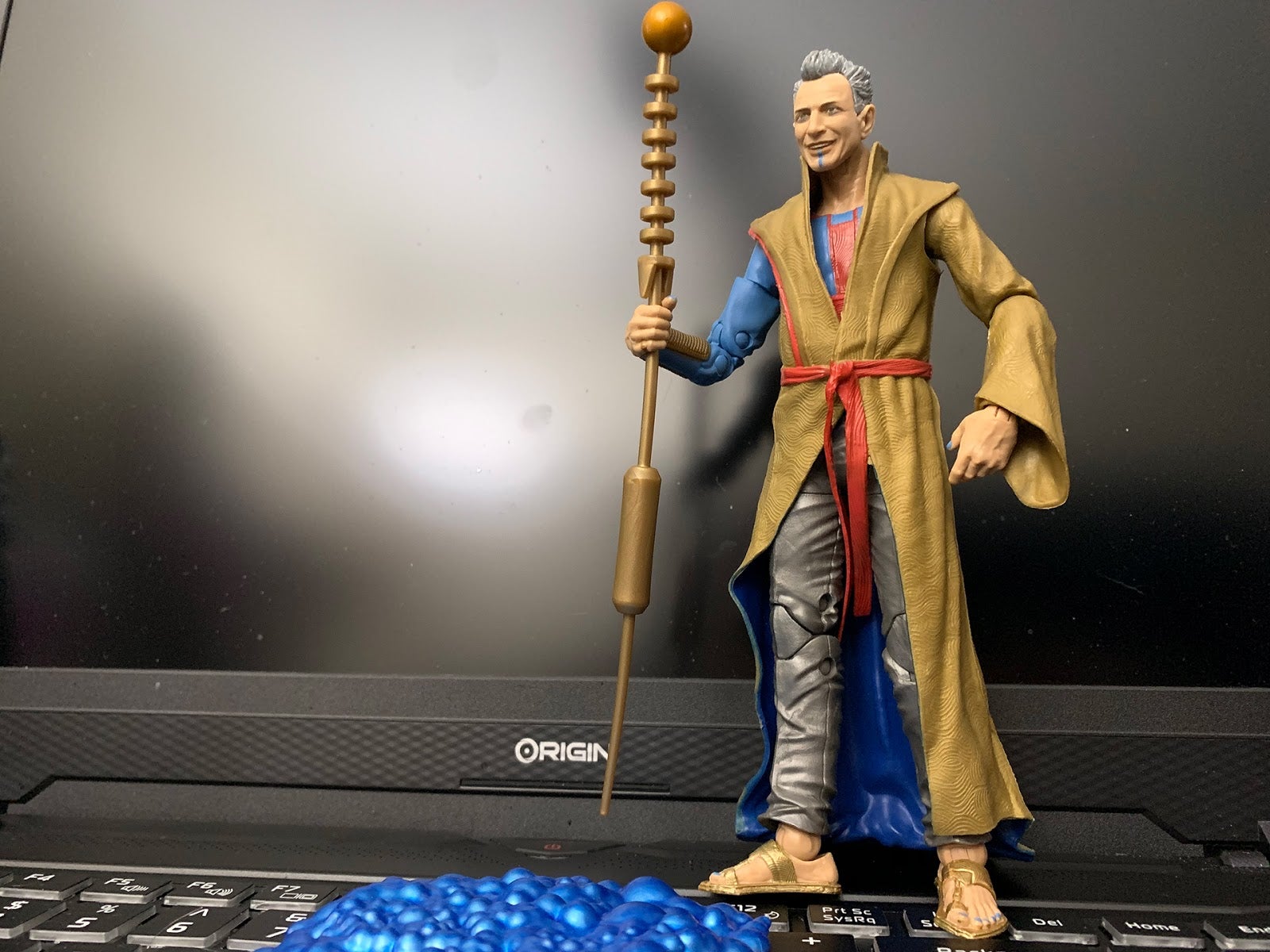 The figure doesn’t just look like Jeff. He carries himself like Jeff. The way the arms are poised and the shoulders hunch slightly forward, like the figure is interested and appreciative of everything around him. He’s excited to be here, hanging out on my computer. If the computer could talk, I imagine it would be totally into him. 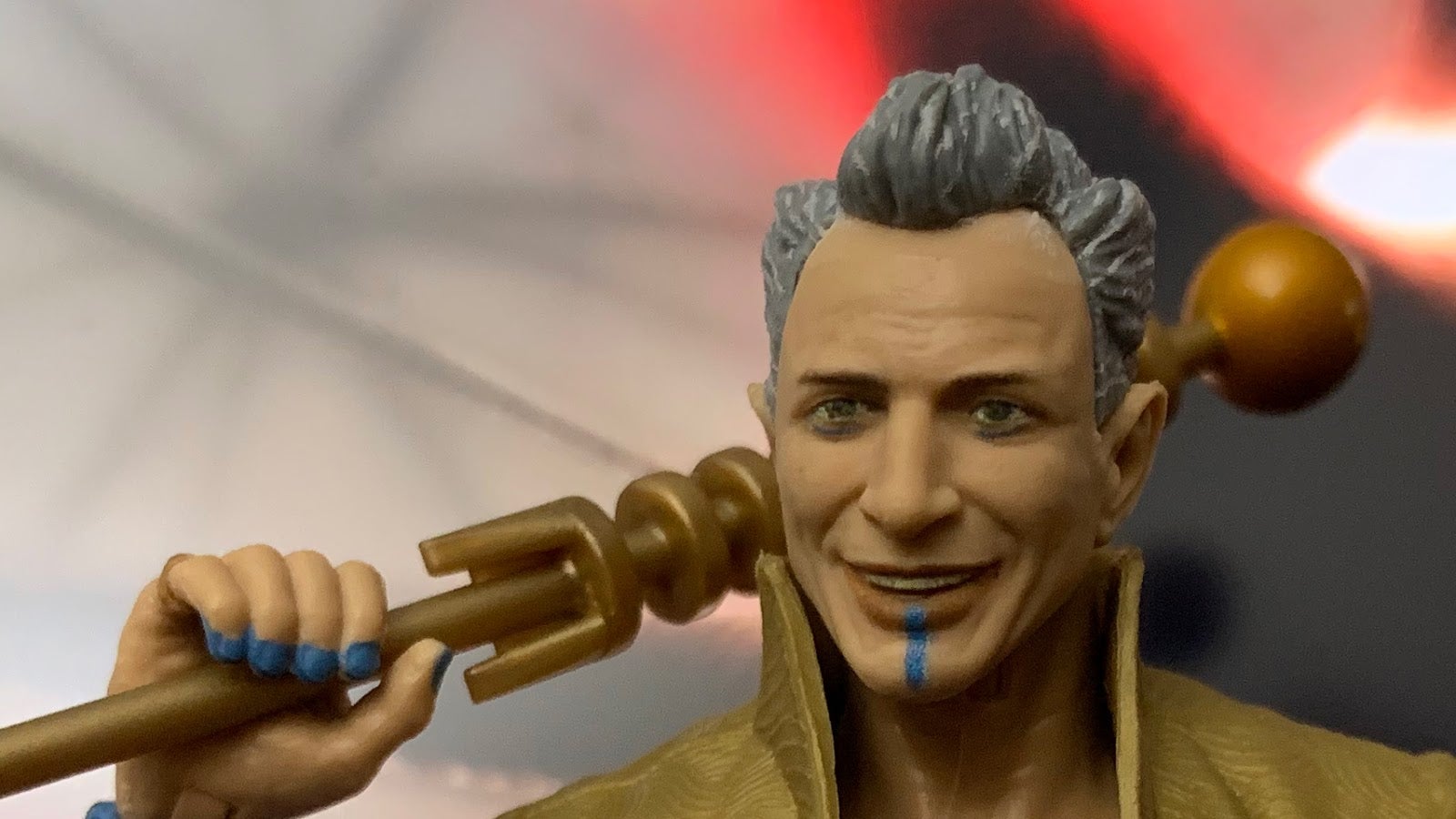 Look at that face. No one has ever been more excited about wearing blue face paint and heavy eyeliner. Notice the fingernails? Pretty neat attention to detail, right? It doesn’t stop there. 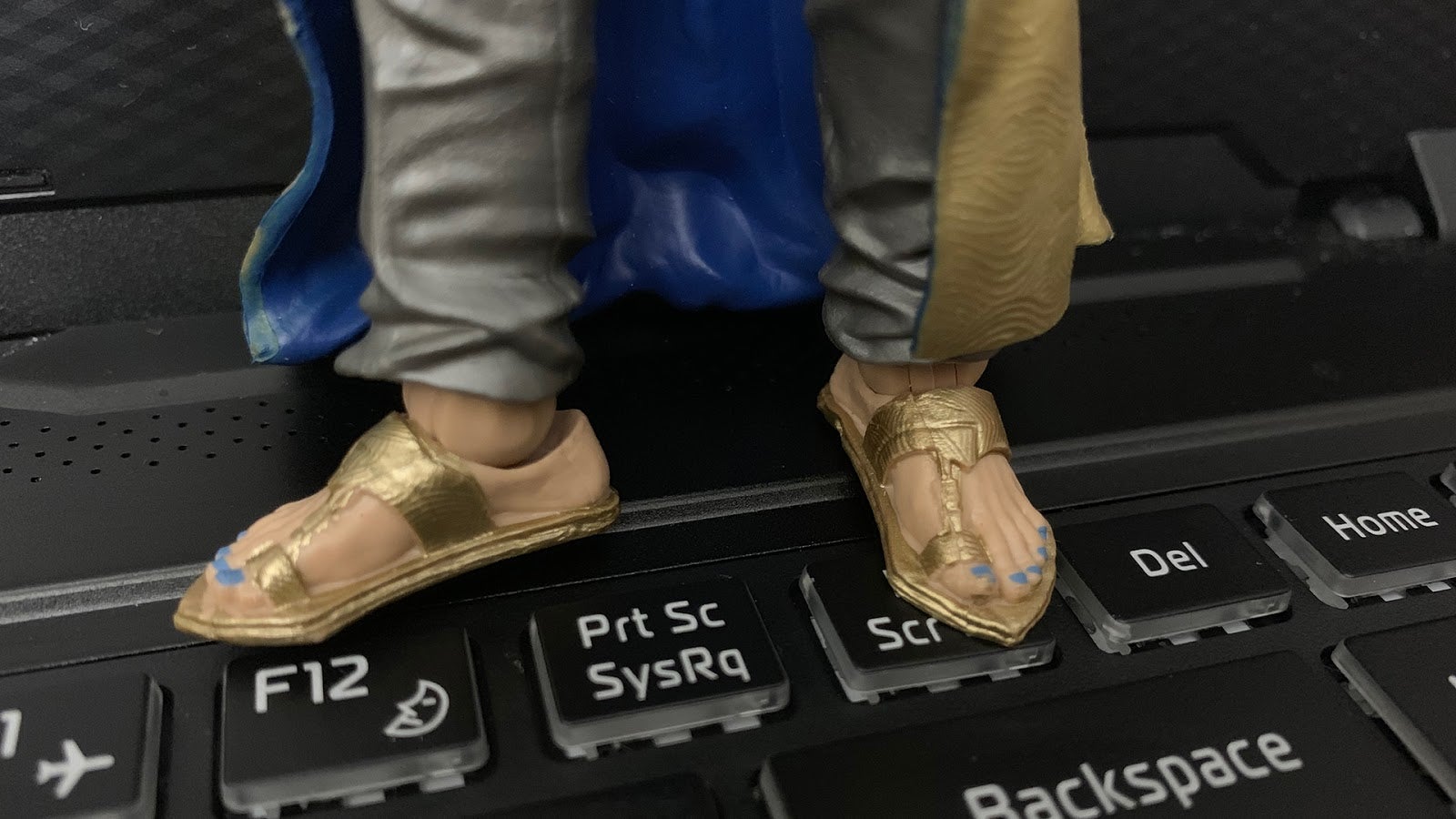 Not only is Jeff sporting blue polish on his toenails, he’s also got on a pair of golden sandals, complete with big toe ring and chain.

There’s another version of Hasbro’s six-inch Grandmaster figure hitting stores in the U.S. now. Available (with pricy import fees) in a two-pack with Thor: Ragnarok’s rocky hero Korg, it presents a more serious, less-Goldblum-y version of the character. 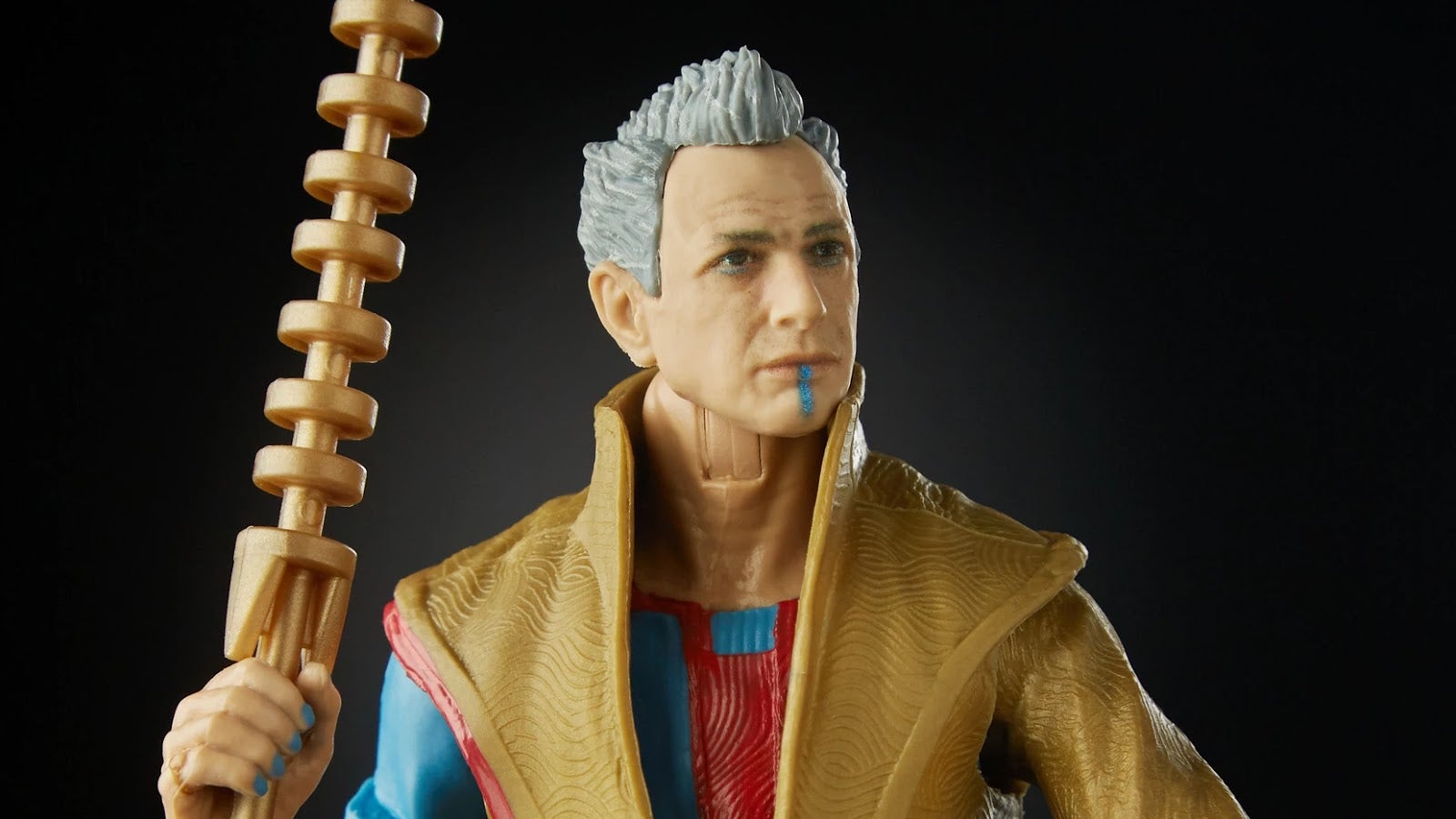 Without the grin and the manic look around his eyes, he’s just not my Grandmaster. My Grandmaster is Goldblum at his magnetic finest, drawing the spotlight and attention from everyone around him. He’s irresistible. 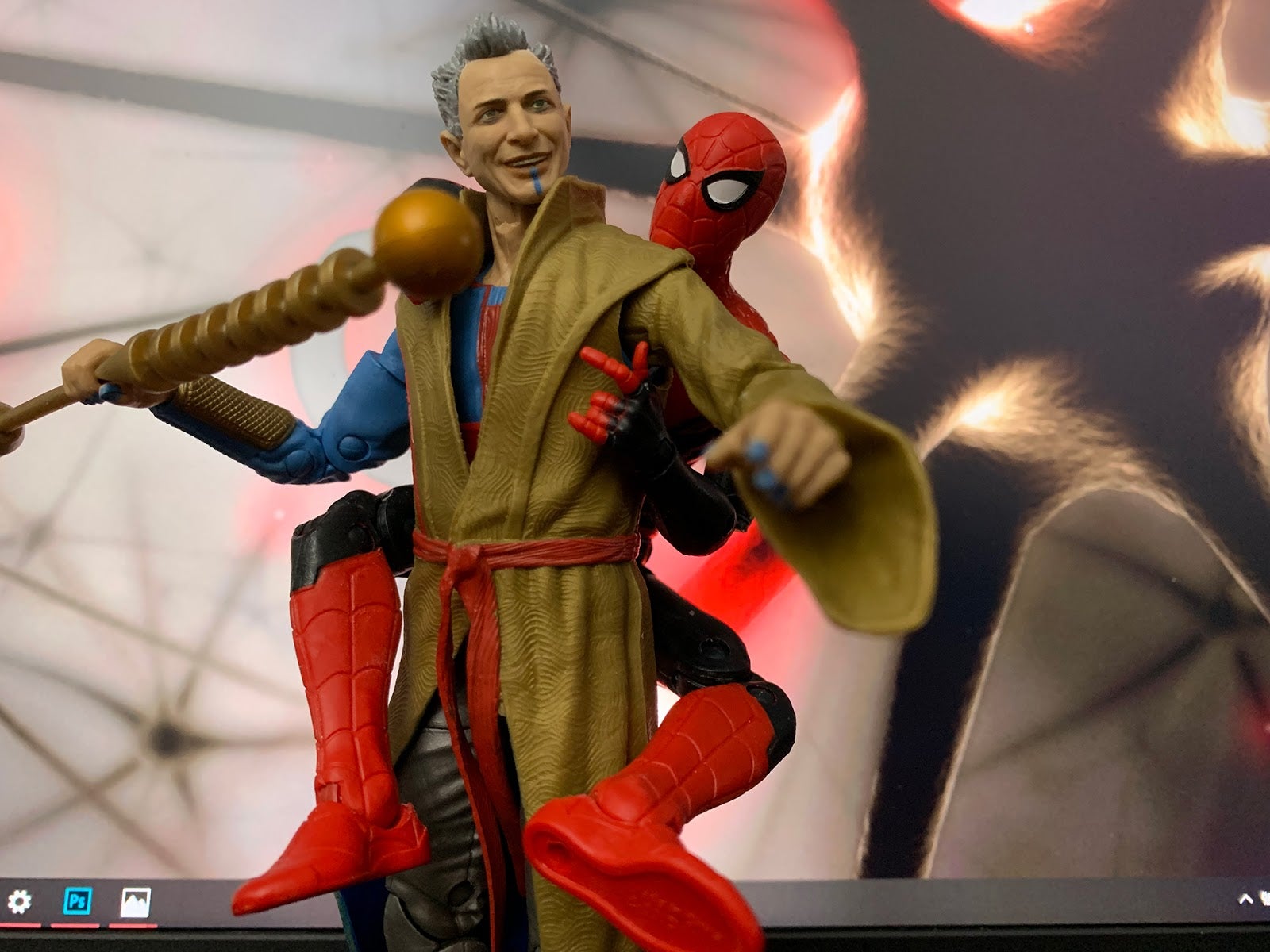