Earlier this week, Instagram user ncxaesthetic began uploading a series of “screenshots” in which he took iconic scenes from The Legend of Zelda: Breath of the Wild and rendered them in the 8-bit pixel art style of the Game Boy Color Zelda games such as Link’s Awakening DX.

Here, for example, is a scene from early in the game, where Link meets the “Old Man” shortly after awakening at the start.

The Legend of Zelda: Breath of the Wild GBC Screencaps – Old Man – (1/10) ~~ Finally!!! Some botw content!! I thought the one with text box looked nicer for the post thumbnail so chronologically these screencaps are out of order fyi… I'm so happy to finally upload these pieces though. I've only done 10 for the first part of this series. Just a heads up however, this series doesnt have any shrines or divine beasts or anything super "Breath of the Wild-y". Those will come in the next series. My life has been so insanely hectic lately that I barely even had time to finish this series, so I'm not sure if I'll do it for certain but I may or may not be taking a very short break from uploading after this series is done just to be able to catch up on my art. I'll keep you posted on that as soon as I decide what's going on 🙂 ~~ #art #artofig #artistic #drawing #photoshop #edit #pixel #pixelart #tumblr #demake #remake #videogames #gaming #nintendo #8bit #16bit #nes #zelda #legendofzelda #gameboy #ocarinaoftime #majorasmask #windwaker #twilightprincess #skywardsword #breathofthewild #botw #breathofthewildfanart #botwlink #nintendoswitch

Dig back further into ncxaesthetic’s profile, and you’ll see he’s been working at this for a while, remaking scenes from almost every 3D Zelda in the style of the 2D Game Boy entries.

Turns out ncxaesthetic — also known as Nate, 20 — began making these pieces as a way to get better at something he loved doing: Making pixel art.

“Around January of this year, I was replaying Link’s Awakening DX on my 3DS and out of nowhere I just thought to myself, ‘I wonder if anyone has drawn up the bosses from the 3D Zelda games in a 2D format?’” Nate wrote to me via email. “So I did some digging around and much to my disappointment, I found none.”

So Nate decided to do it himself. He started with Gohma, the first boss from The Legend of Zelda: The Wind Waker, and began using a seven-year-old laptop with a cracked screen and an old copy of Photoshop CS6. Soon, he had fashioned every Wind Waker boss in pixel art. 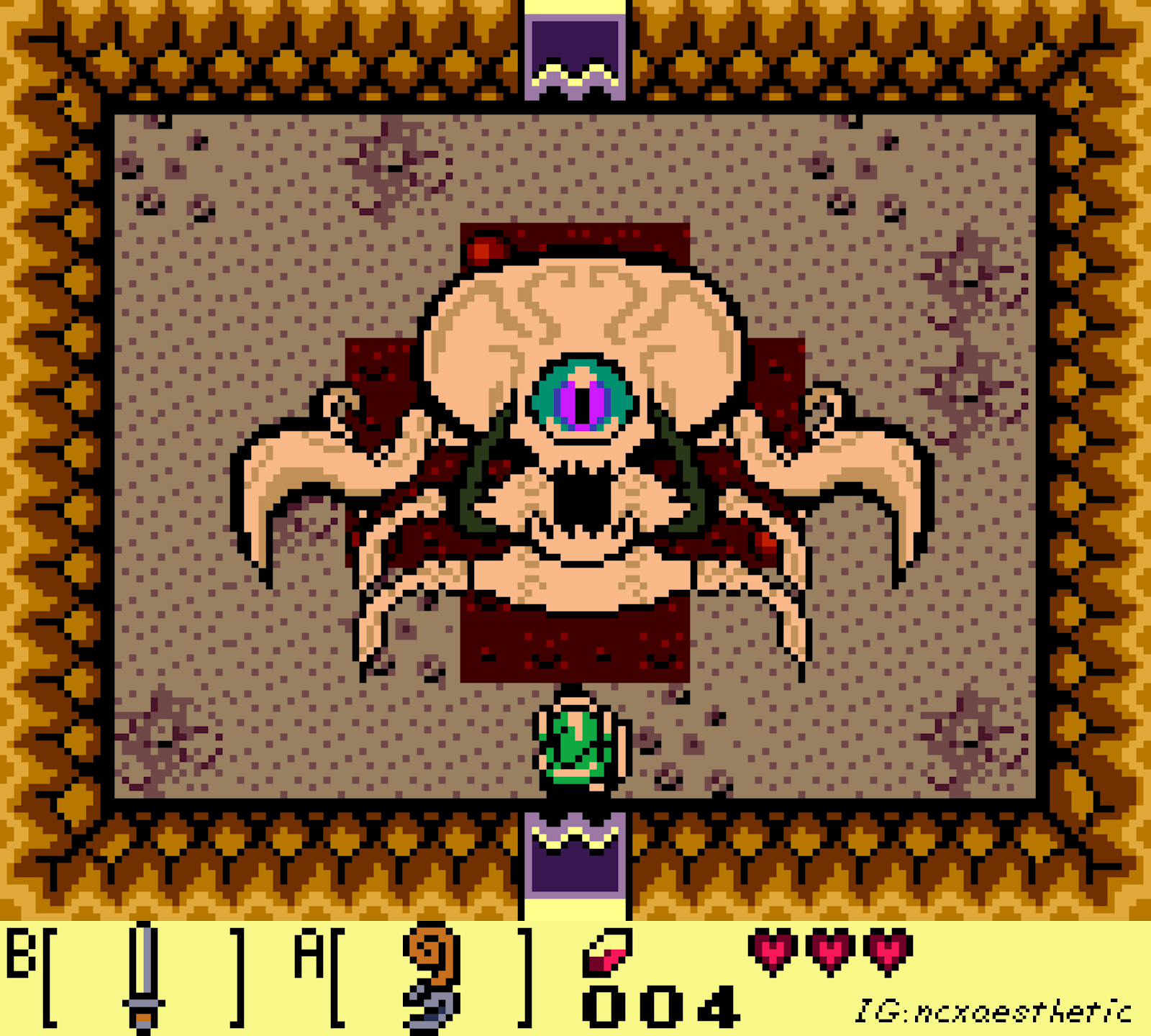 “I found that project very fun to complete,” Nate said, “so I just continued making content from there and now here we are.”

Nate began making pixel art four years ago. He had been on his way to a convention and planned to attend a signing by one of his favourite actors from The Walking Dead. As a gift, he had brought a pixel-art representation of the character.

“The artwork was absolutely terrible and I give him props to this day for acting like it was good,” Nate says. “It truly showed me how talented of a performer he is.”

It took Nate two years before he returned to pixel art, recreating scenes the iconic finale of The Walking Dead’s sixth season and its seventh-season premiere with Mega Man sprites. 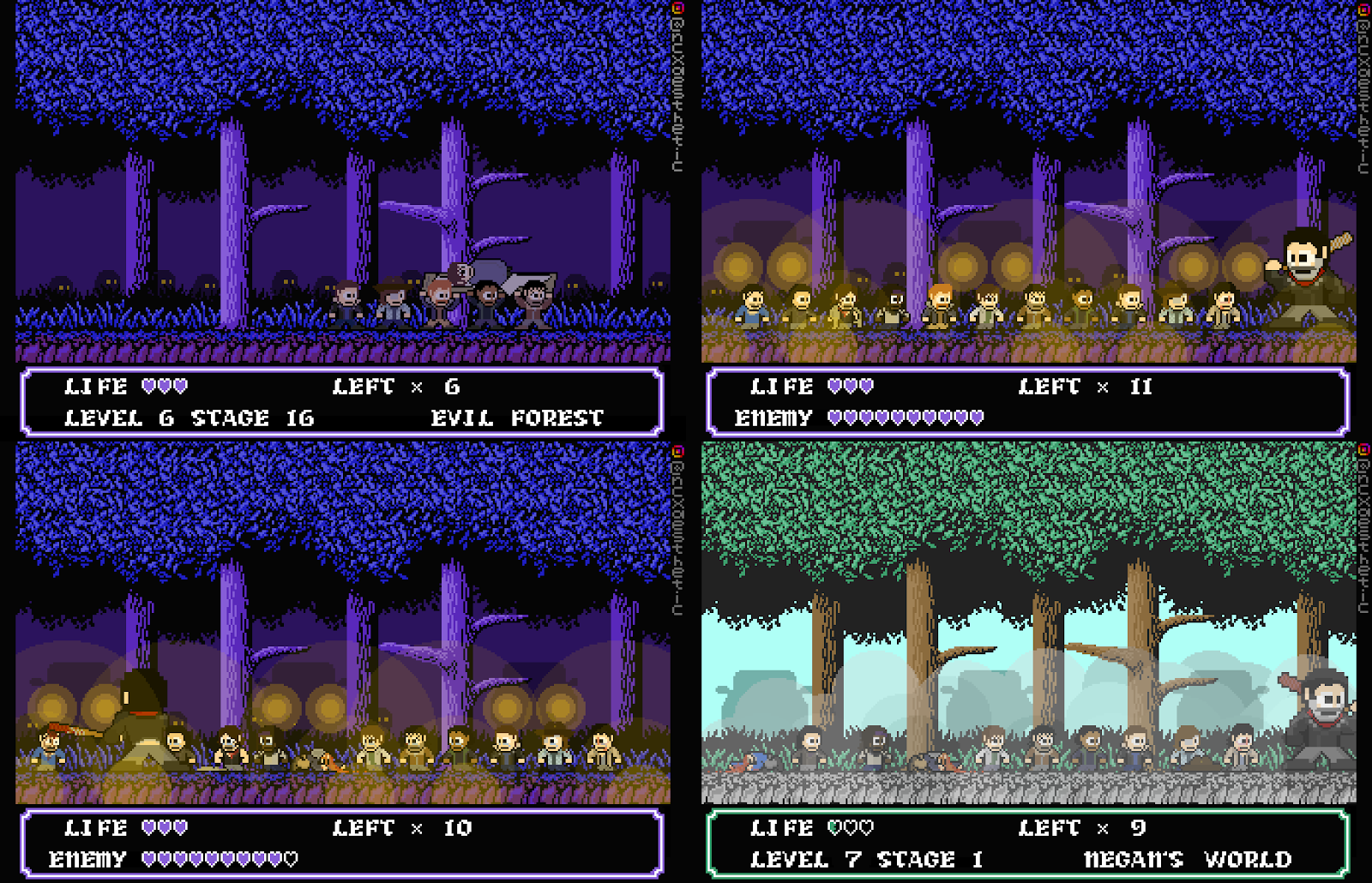 “At a certain point I realised I really did enjoy making pixel art, however I was still terrible at it and that bothered me,” Nate says.

“I told myself I’d make at least one pixel artwork per day as a way to keep practising and keep getting better, so that’s what I did. I took a few breaks here and there, but currently I’m on almost a nine-month streak of making pixel art every single day.”

Thus Nate began working his way through 3D Zelda games. It’s a task that he says is much harder than it looks. He walked me through how he translated the entrance of the Forest Temple in Ocarina of Time into 2D.

My first step was to take a look at the room from the original game and to see the basic layout of everything. The entrance lies south, a door to the north, two dead trees symmetrical to each other on both sides of the room and a climbable wall to the right that provides access to a chest and key.

The Game Boy Color is a very limited system, so my biggest challenge here is to figure out how to incorporate that climbable wall into my piece. I save that for last because it helps me to visualise things better when I have something to look at; so I create the room, add the trees, the door, and the entrance. To add some extra flair to the room I add symmetrical pillars to either side of the north door.

Now I approach that challenge I mentioned earlier. In Link’s Awakening, Oracle of Seasons and Oracle of Ages, there are two ways to create “height” in a dungeon: Either by adding an interactive staircase texture leading up to a whole other floor or by adding a plain staircase texture paired with a wall below which takes up quite a lot of room on the screen.

The latter isn’t an option given the size constraints of the room, so I opted for the interactive staircase as my method of translating the climbable wall into a 2D format.

To Nate, the placement of different objects and textures on the limited amount of space you have when recreating a Game Boy screen is a challenge akin to a good puzzle game, one that he says is only enhanced by the limitations of his old equipment.

“The crack near the middle of my screen slowly grows larger week by week, however I find it humbling in an odd way. There is a common notion that to make decent content you need decent tools. However, here I am making content with a less-than-decent piece of hardware that even sometimes gets in the way of me trying to work,” he says.

“It’s almost poetic — a reminder that anyone with a creative mind can still create no matter the quality of the tools they work with.”