The Nintendo Switch Lite Has Sealed The 3DS’s Coffin 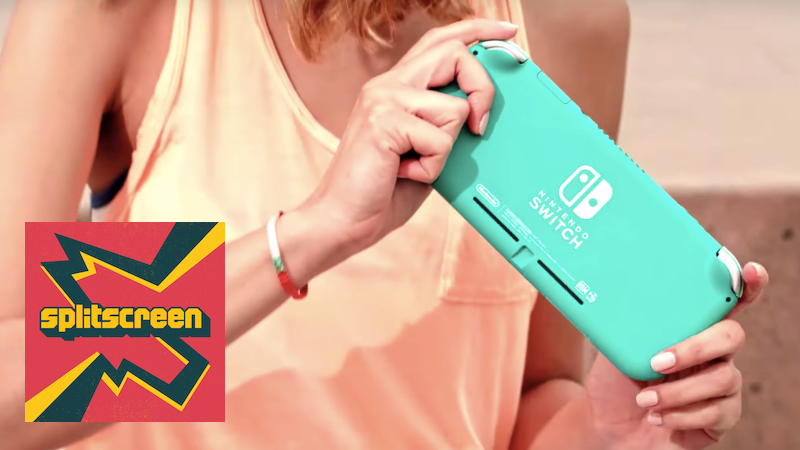 Remember the Nintendo 3DS? Enjoy that while you can, because after the Nintendo Switch Lite comes out, the 3DS will be erased from all of our collective memories. OK, not really, but the Switch Lite does look nifty. On this week’s Kotaku Splitscreen, we talk about playing Switch games while lying in a hammock and also the cool limited edition 3DSes we bought for no reason.

We start out by discussing games we’ve been playing, with Jason still on Dragon Quest Builders 2 (check out his impressions) and Kirk getting the bad ending in Metro Exodus.

I was on vacation, so I played Switch games in the wild (Phoenix Wright and West of Loathing). Then we break for some news (33:25); there was the Switch Lite announcement, a situation with the game marketplace G2A trying to pay journalists for positive coverage (with no one biting), and the Wind Waker homage discovered in Breath of the Wild. Finally, we get into off-topic discussion (54:23) of Pose, Stranger Things 3, and Veronica Mars before Kirk’s music pick of the week.

Jason: [The Switch Lite] is clearly designed to fill that gap that the 3DS and 2DS, which are now basically dead, have left in their wake. So this is definitely going to appeal to parents who want to buy their kids something and don’t want to spend $US300 ($430), or people who want a Switch but can’t afford $469, because it’s a $329.95 price point. It looks sleek, got some cool colour options. Kirk, what did you think of the Switch Lite?

Kirk: I have a couple of questions. First of all, was there a video announcing this?

Kirk: Nice. Did they use the Switch sound effect?

Kirk: That is interesting, because it will not make that sound effect. You will not get to hear that lovely snapping sound effect if you get this handheld, because that is the sound of the Joy-Con controller snapping in. Interesting, they’re going to stick with that sound even though they have removed one of the Switch’s defining gimmicks.

Second question: can we call it the Lite Switch? Because I like that name more than the Switch Lite. And I’m kind of surprised that Nintendo didn’t come up with that.

Jason: [laughs] That wouldn’t make any sense. Can you imagine going to Target and being like, “Hey, can I have a Lite Switch?” “Oh, well, electronics are in the back, and hardware is over there—” “No no no, a Lite Switch!”

Maddy: But, up until now, people have been going to the store and asking for a Switch and getting directed to the riding crops. It’s just been a huge problem this whole time. Nobody knows what a Nintendo Switch or Switch Lite would be, and they certainly wouldn’t acclimate to that phrase if asked by a customer.

Maddy: You’re right, and that’s on the customer for not understanding where the Nintendo Switch is sold. You’re so right.

I don’t know what is with the convention of putting “Lite” after the end of a product name. It’s definitely weird, because that’s not how the English language works, but it’s just something we’ve accepted.

Jason: Well, it’s a Nintendo thing. Nintendo started it with the DS Lite, which was actually their best hardware upgrade ever, because the original DS was kind of chunky and felt kinda off and had some hardware issues. Then the DS Lite came out, and it was perfect: this great clamshell, super sleek, looked kinda like an iPod, was just super Apple-inspired.

Kirk: Yeah, I got the DS Lite. That was the first gaming system I bought since an original Xbox, in a long time. I played many, many games on that thing. I think I still have it somewhere.

Maddy: I think I traded mine in. I needed that tiny amount of money for trading it in, at some point in my life.

Kirk: What are the other Nintendo Lite consoles? Are there other ones, or is it just the DS Lite?

Jason: Just the DS Lite. There was a Game Boy SP, but that was before they started using Lite.

Maddy: There was the Game Boy Pocket. That would have been the equivalent of the Lite. I had one of those.

Kirk: Pocket, that’s the same idea as Switch Lite. Anyway, I don’t really know what I think of it. It’s not for me, but that’s fine. I already have a Switch. I guess my main feeling is that I’m glad that at least thus far they haven’t announced a more powerful Switch that will be able to run Breath of the Wild 2 and make it look better, because then I’ll start being tempted, and I really don’t want to spend $329.95 on a new console when I already have a Switch. So it’s kind of nice to just be like, “Oh, cool! This one is not one of the ones that I have to concern myself with.” Which I typically feel about these kinds of Nintendo sub-hardware revisions, and I’m fine with it.

Jason: Yeah, the Pro will be next year, I bet.

Jason: For sure. You can hold off on that hardware purchase for now. In fact, I bet it gets combined with Breath of the Wild 2, the way this one has launched right before Pokemon.

Kirk: Which is what they did with the 2DS as well.

Maddy: Are you guys sad that the 3DS is basically dead now? Because I’m kind of sad about it. I have such a pretty 3DS. When Metroid II came out—the new one—I got the 3DS that has Samus on it, and it looks so freakin’ cool. What happened was I got that one, traded in my old one, played and loved that game, and then that was it. It’s a Metroid machine. I purchased a Metroid machine, with Metroid herself! With Samus on there. And that’s it, that’s all I did with it. Now it’s just been collecting dust ever since.

Maddy: Can she crawl, though? That’s what I still can’t figure it out. I don’t know, I’m sad about it.

Kirk: I have the Majora’s Mask 3DS, which is amazing looking.

Jason: Yeah, me too. It’s incredible.

Kirk: It was super hard to get. I got it because Jason, you were so paying attention to when they were available online, and you told me immediately and I ordered it.

Maddy: I had to pre-order mine! I had to sign up to get it.

Kirk: Same, yeah. It was on Best Buy for the five minutes that it would be available. I felt really cool getting it. I think I played that Metroid remake, and I didn’t even finish that, because the Switch was already out by then. I guess it came out a little bit before the Switch, but then the Switch came out, and I was playing Zelda and I just completely left the 3DS behind.

Jason: That’s the thing. Once you’re used to the big screen —

Kirk: And the buttons, for me. Having a full controller scheme is so much better.

Jason: Yeah. I agree on both counts. And once you’re used to that, it’s hard to go back to the 3DS. I know this because I tried to go back to the 3DS to play a bunch of Persona Q2, and just could not get used to it. I was like, why am I not just playing Switch games right now? So yeah, I’m not going to miss the 3DS.

Maddy: I’ll just have to buy a really pretty Metroid sticker for my Switch and put it on the back and pretend that I have a special Metroid Switch.