Following the recent release of the GeForce RTX 2060 Super and 2070 Super, we have the final piece in Nvidia’s Super puzzle. Coming in at the same $1249 price point as its predecessor, the new RTX 2080 Super version will offer some performance increases, though we suspect we won’t see anything too dramatic considering the proposed specs and the fact that Nvidia doesn’t need to cannibalise sales of the 2080 Ti, nor does it have any direct competition at this price point.

The GeForce RTX 2080 Super adds two extra SM units for a 4% increase in cores, meaning this is now a fully enabled TU104 silicon. This is the same silicon used by the standard RTX 2080, as well as the 2070. There’s also a 9% frequency uplift for the base clock, and a 6% increase for the boost clock. Due to the way GPU boost works though, we anticipate this will be closer to a 3 to 4% increase in frequency. 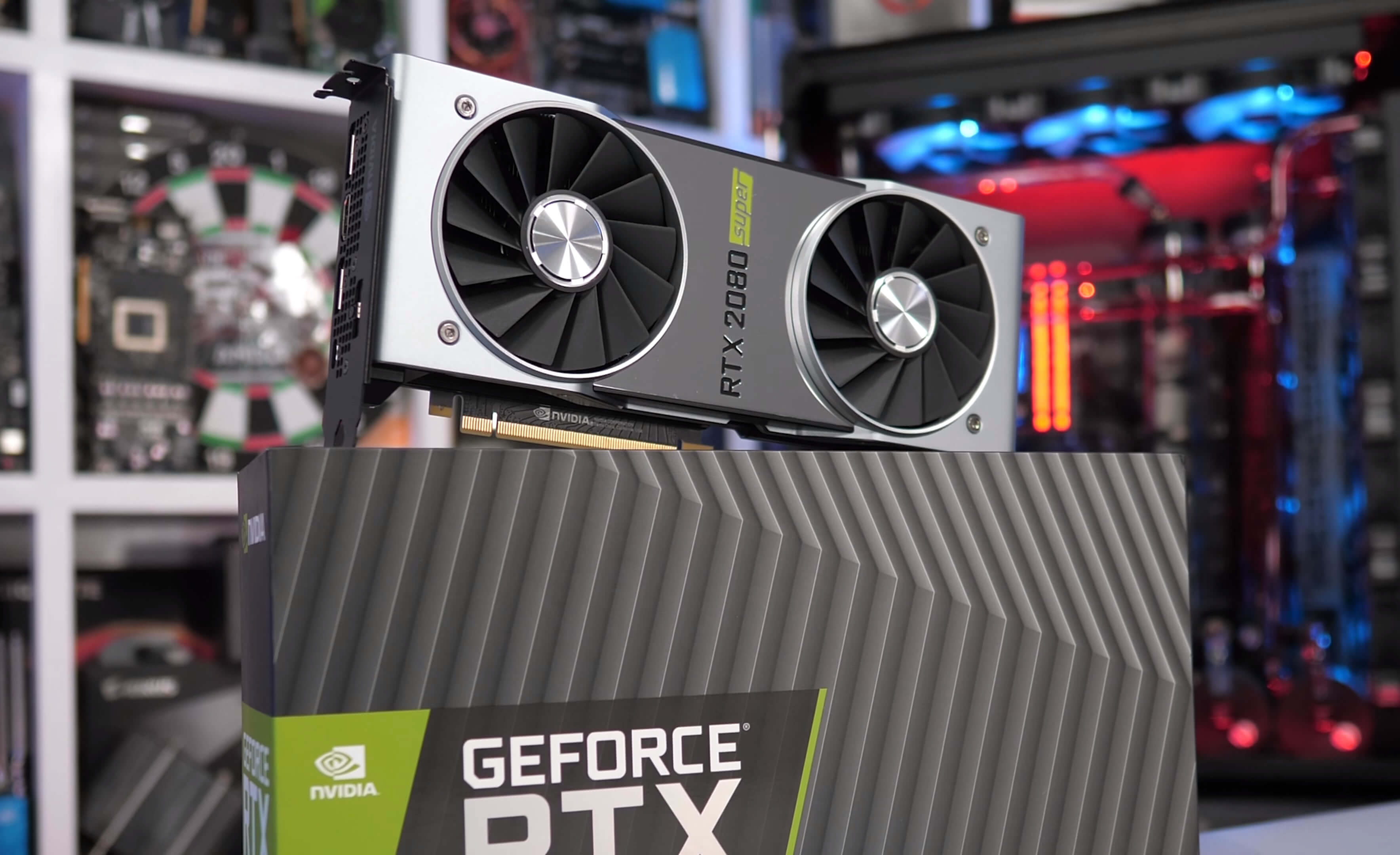 The GDDR6 memory also sees a boost and now we’re looking at a peak data transfer speed of 15.5 Gbps, up from 14 Gbps, an 11% improvement in memory performance. These upgrades have increased the TDP by 16% from 215 watts up to 250 watts.

Nvidia says the RTX 2080 Super delivers a robust 4K experience along with real-time ray tracing. For this review we’re going to look at the 4K gaming experience, while skipping over ray tracing for now as our opinion of the technology in its current state hasn’t changed since we covered it many months ago. 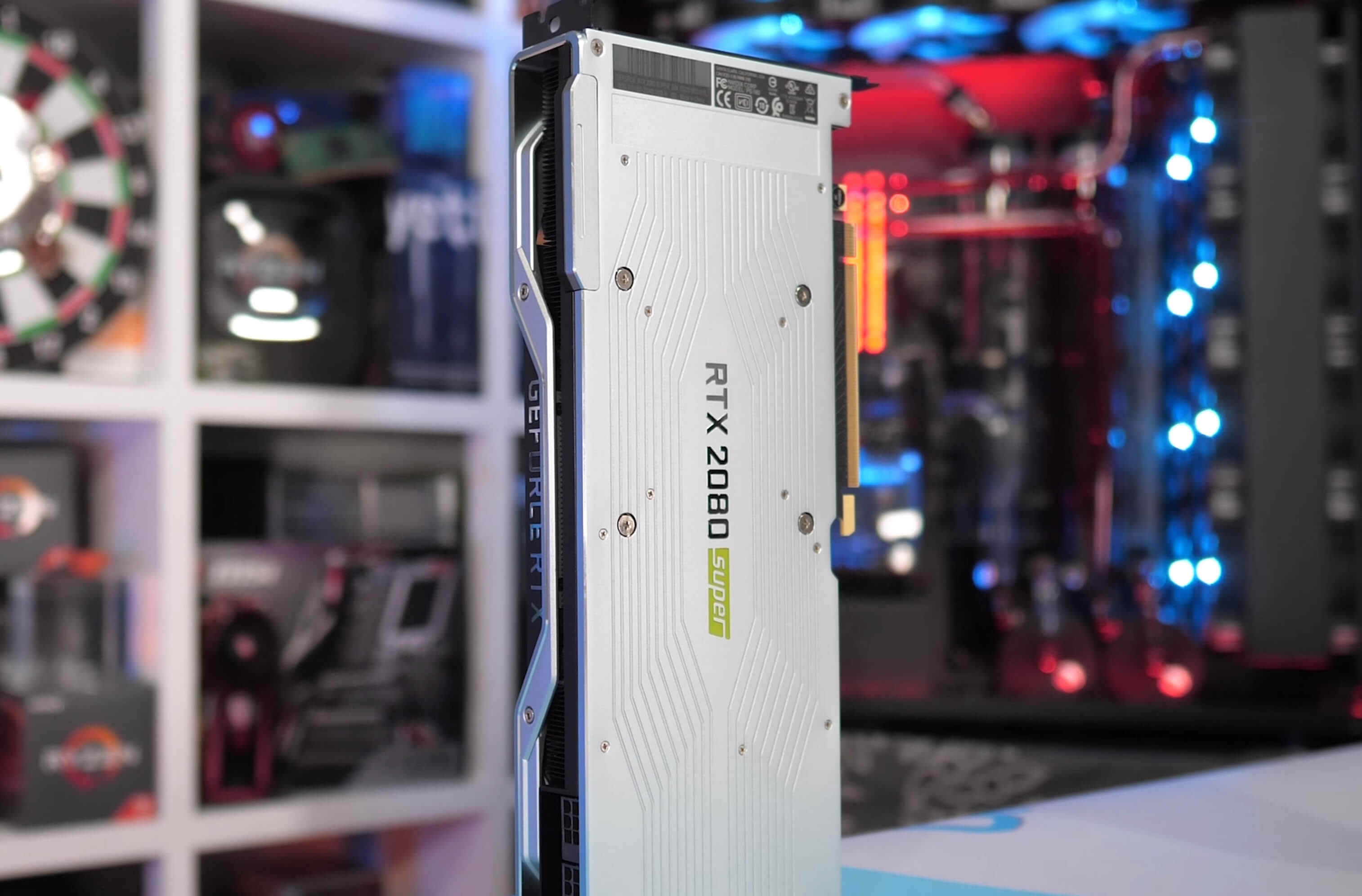 We do plan to revisit ray tracing on a roundup piece with the Super graphics cards soon though, so if you’re interested in the technology that will no doubt be worth a read.

For testing we’ve used our usual gaming rig comprised of an Intel Core i9-9900K clocked at 5 GHz with 32GB of DDR4-3400 memory. The latest drivers available at the time of testing have been used. We have 13 games to look at before the usual performance breakdowns and cost per frame data. 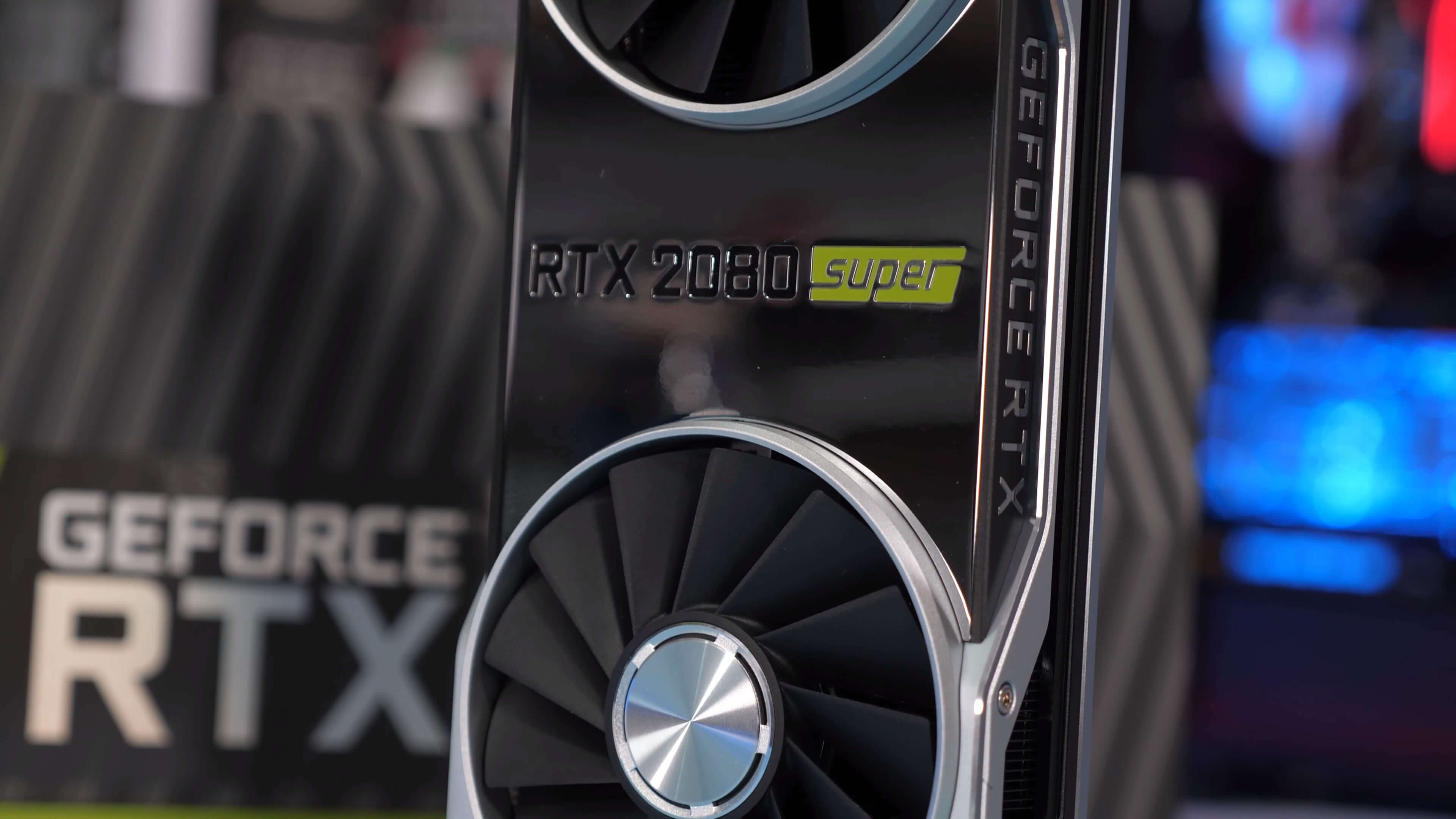 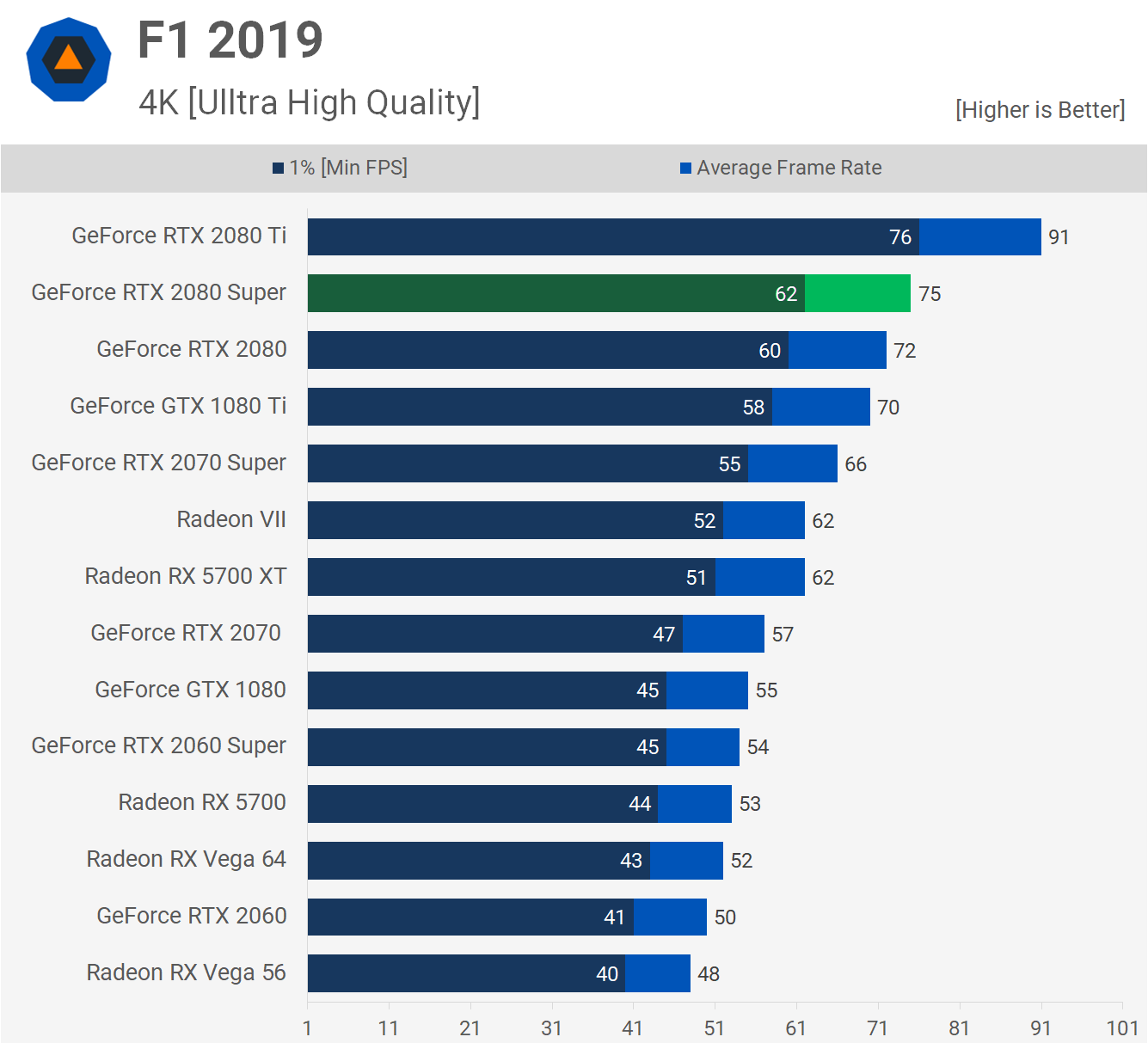 Thankfully the margin is a little more noteworthy in Battlefield V. Here the 2080 Super offered an 8% performance uplift over the older 2080 and that basically put it on par with the newly discontinued Radeon VII. 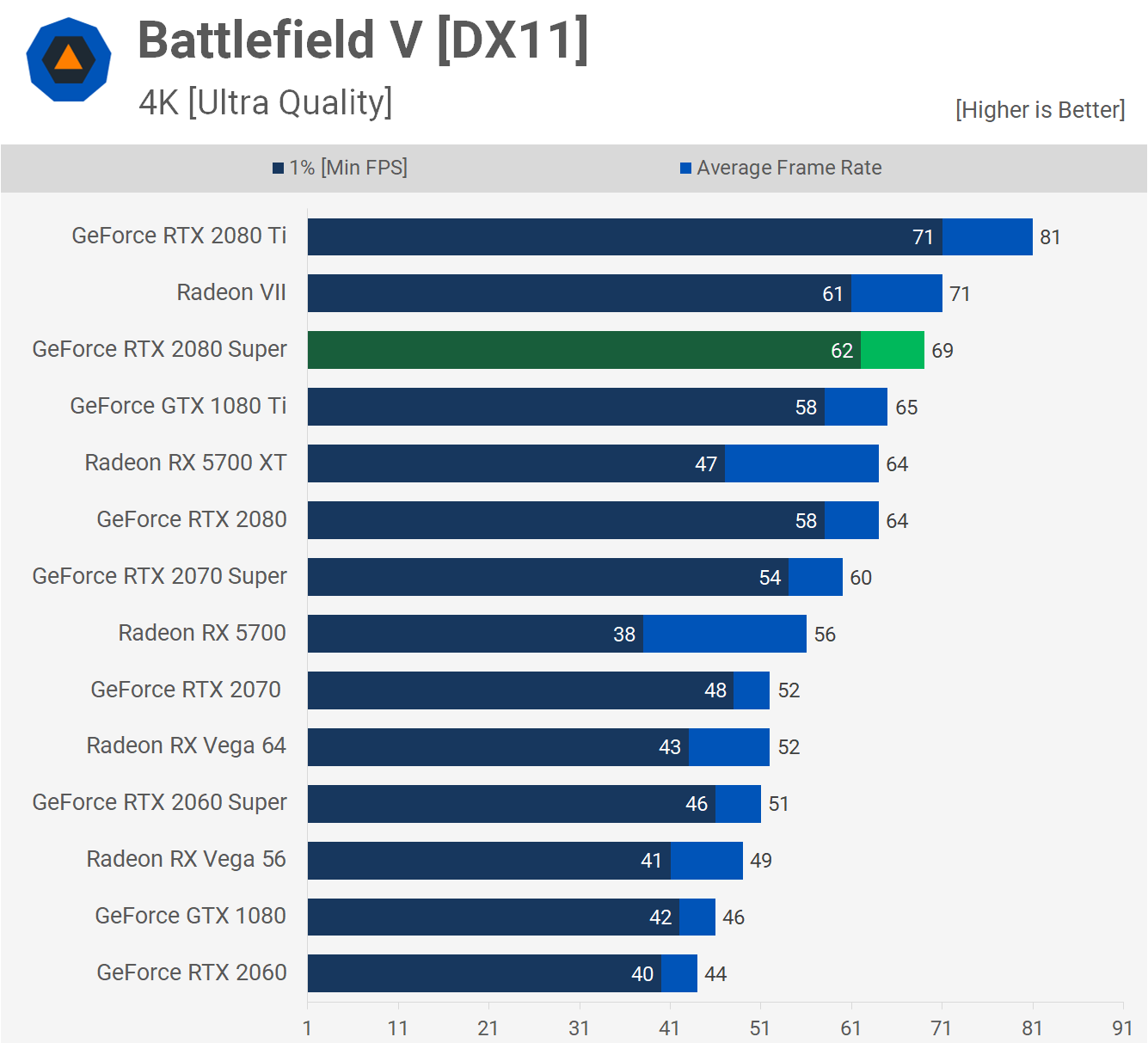 Rainbow Six Siege sees a minor 3% boost to the average frame rate over the standard 2080, though we do see a 6% improvement for the 1% low performance. This time the 2080 Super was 15% slower than the Ti model. 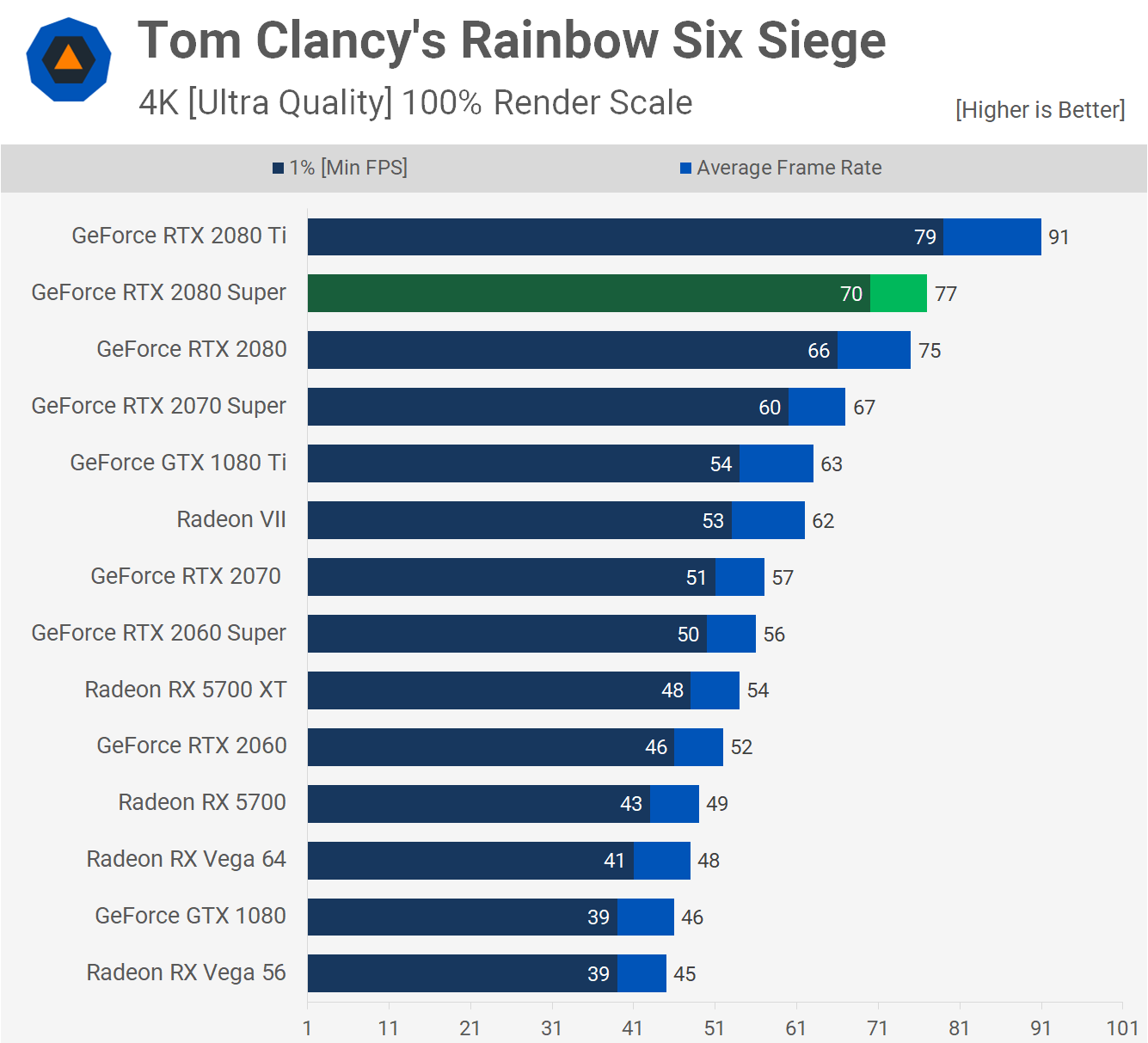 Can we interest you in 1-2 fps more performance? Good, because that’s all you’re going to get in Metro Exodus. That’s to be expected given the specs. 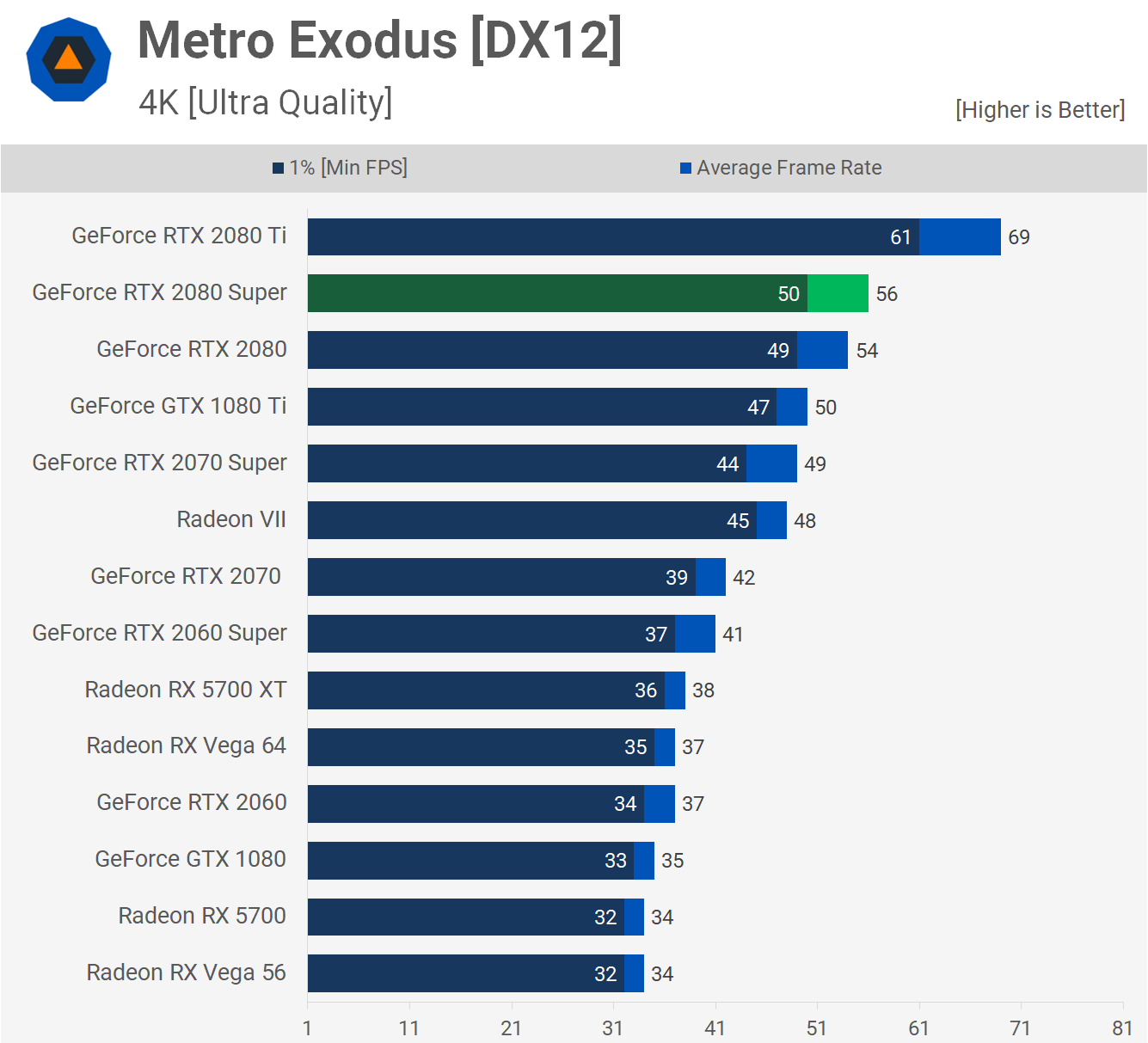 A 6% performance boost in Resident Evil 2 may be cause for celebration (for the same price if we’re totally fair), taking us to 66 fps on average at 4K, for some nice smooth gameplay. 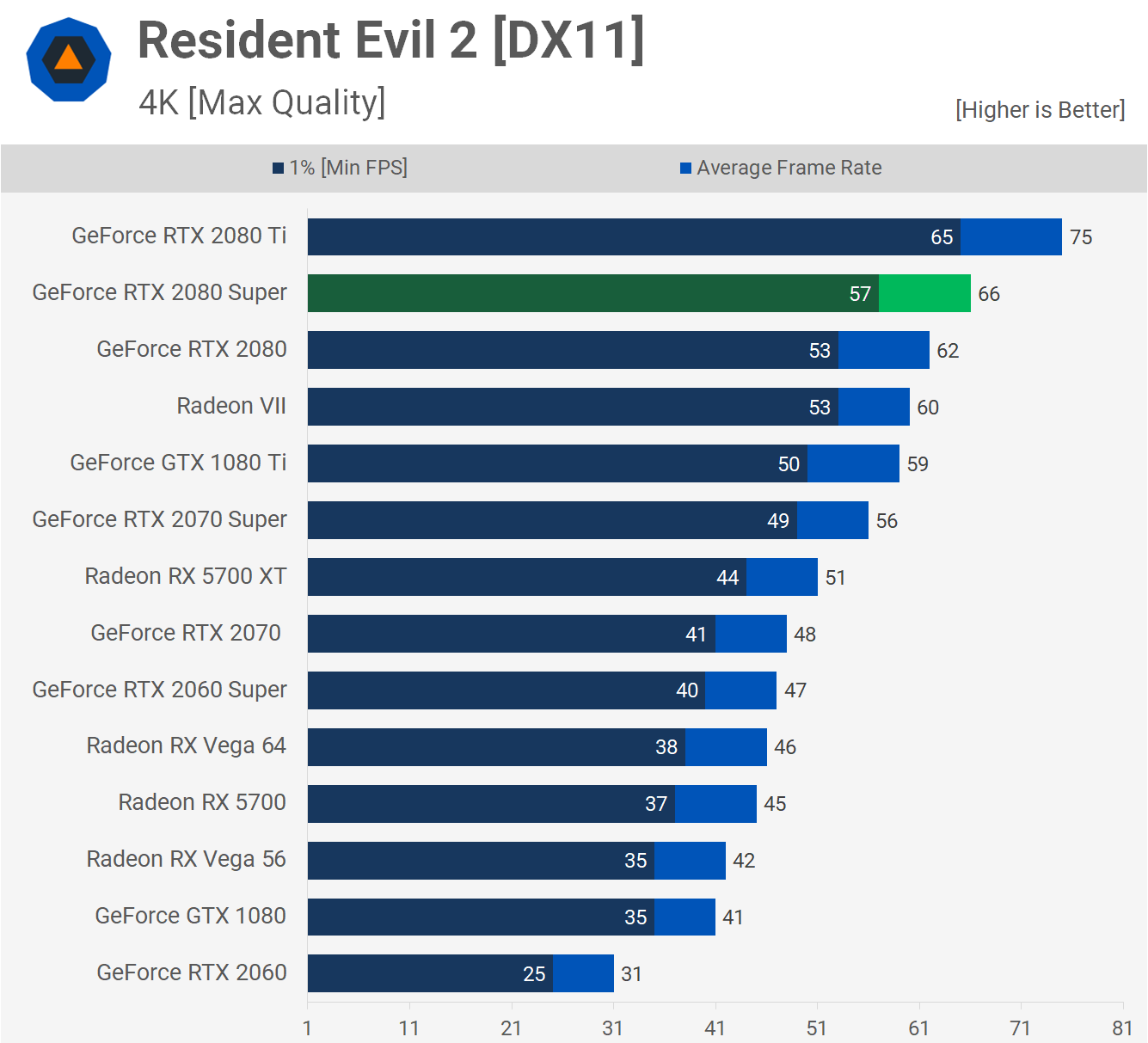 We didn’t quite hit 60 fps in Shadow of the Tomb Raider but given the 2080 Ti just falls short that’s not surprising. The extra memory bandwidth does allow the 2080 Super to beat the vanilla 2080 by an 11% margin in this title. 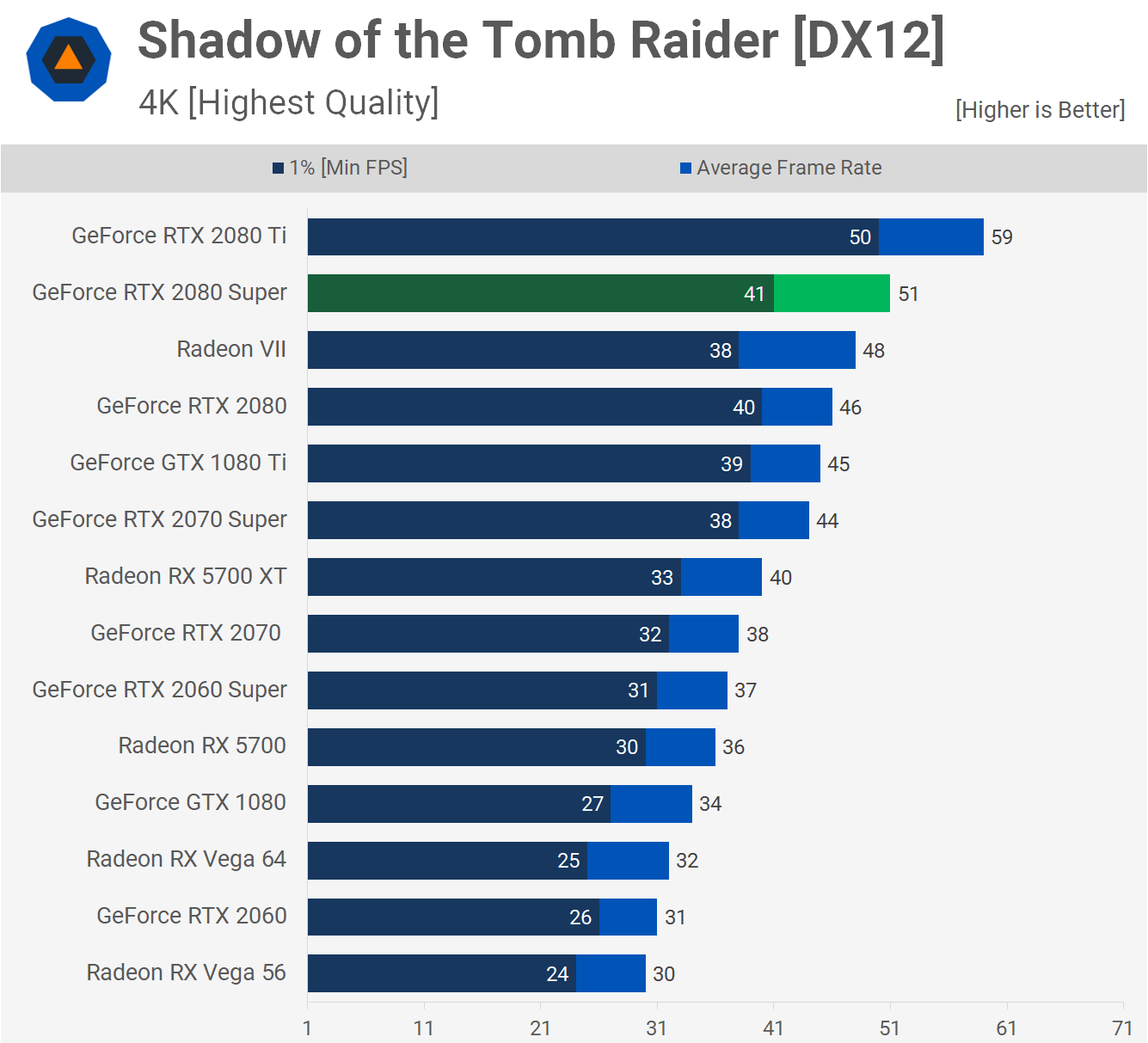 Memory bandwidth isn’t that important in Fortnite, so a small 3% performance uplift over the standard 2080 for 72 fps on average at 4K. Still it was a nice smooth and very crisp looking gaming experience. 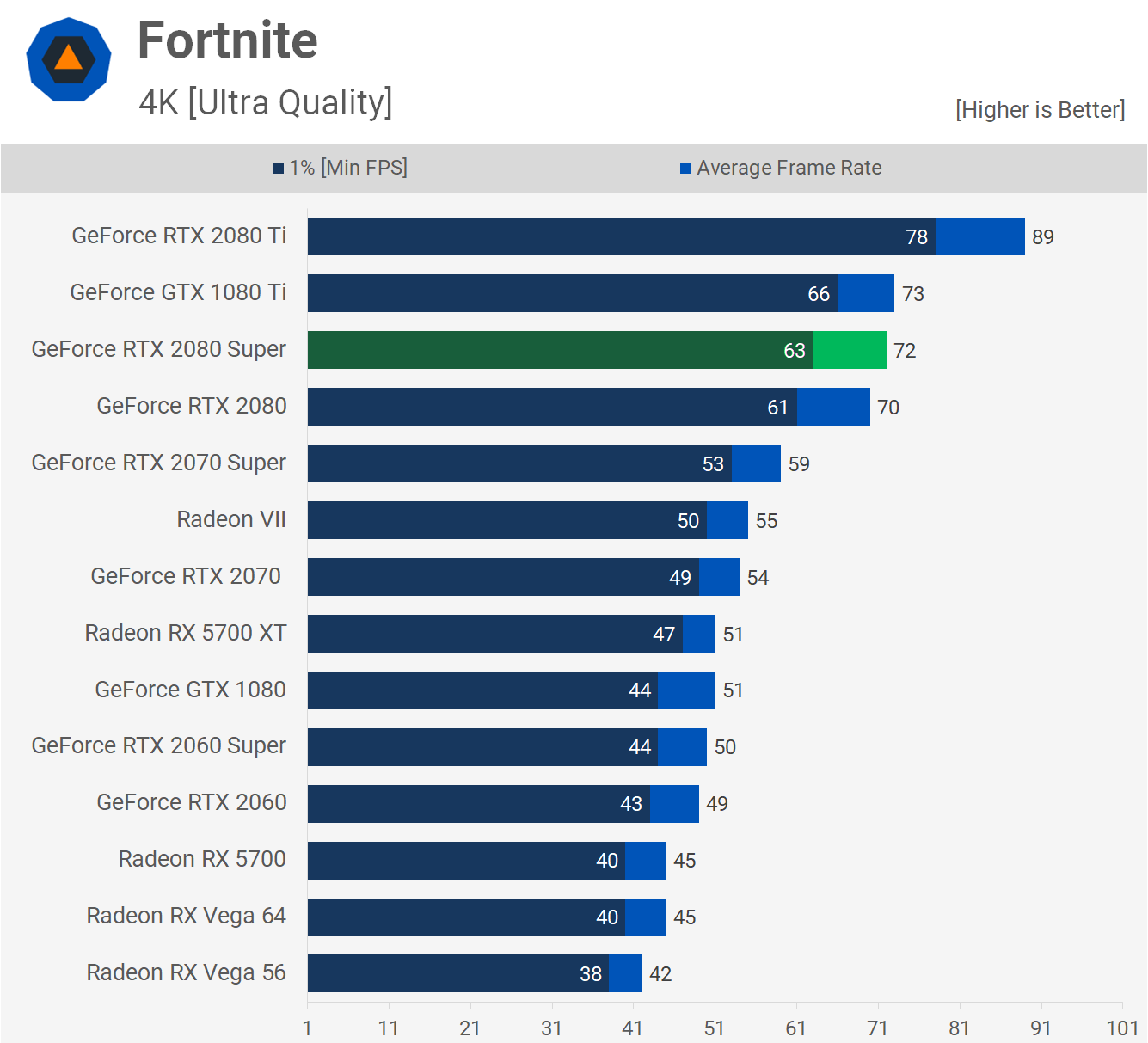 When testing with The Division 2, the Super provided us with a 4% performance boost over the standard RTX 2080. 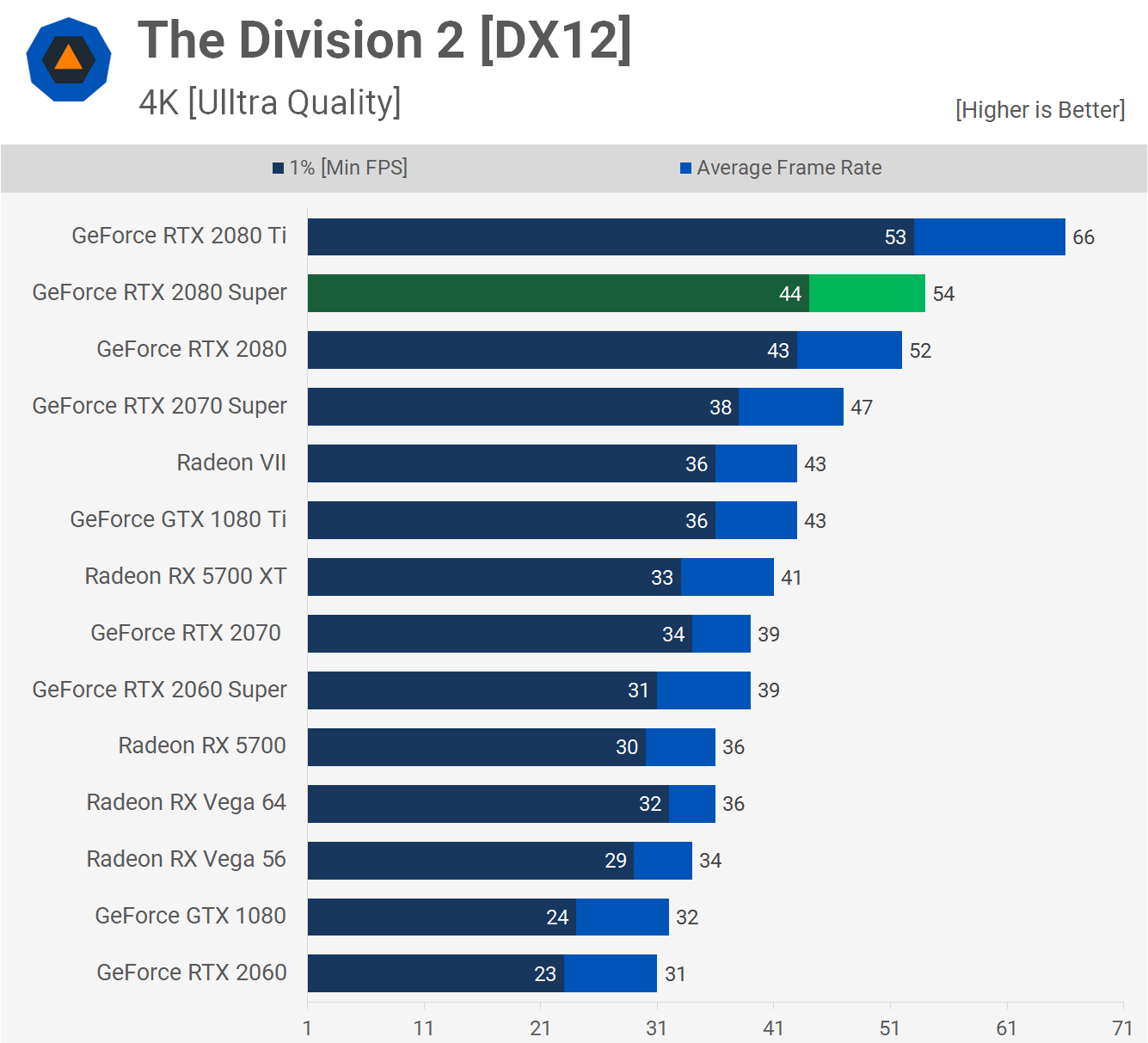 DiRT Rally 2.0 gets a 3 fps performance boost. Ignore the 1% low result and we see a breathtaking 4% performance uplift. 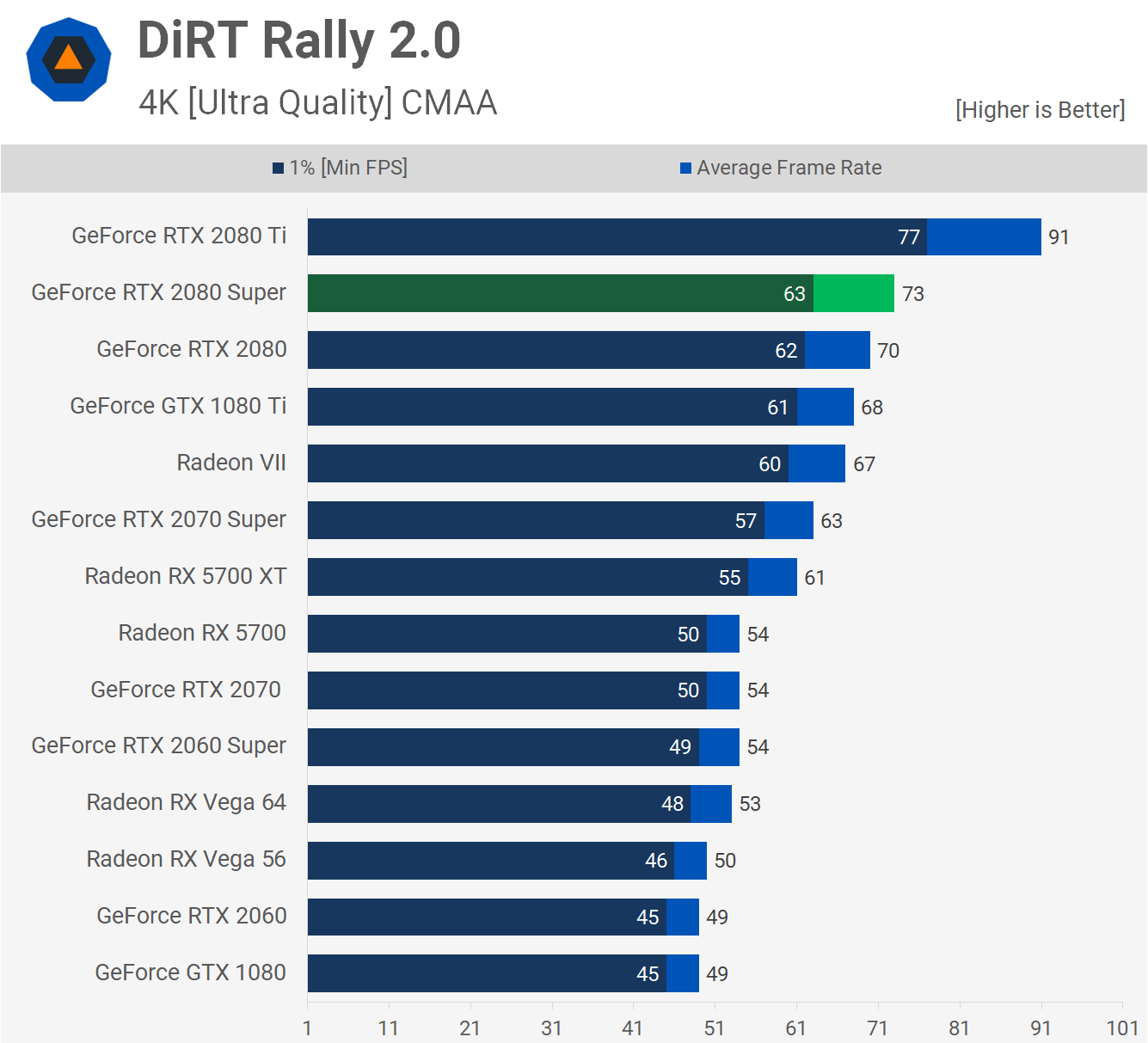 Forza Horizon 4, like Shadow of the Tomb Raider, is a game that benefits from some extra memory bandwidth at 4K and here we see a more significant 7% performance boost, taking the 2080 Super to 92 fps on average. 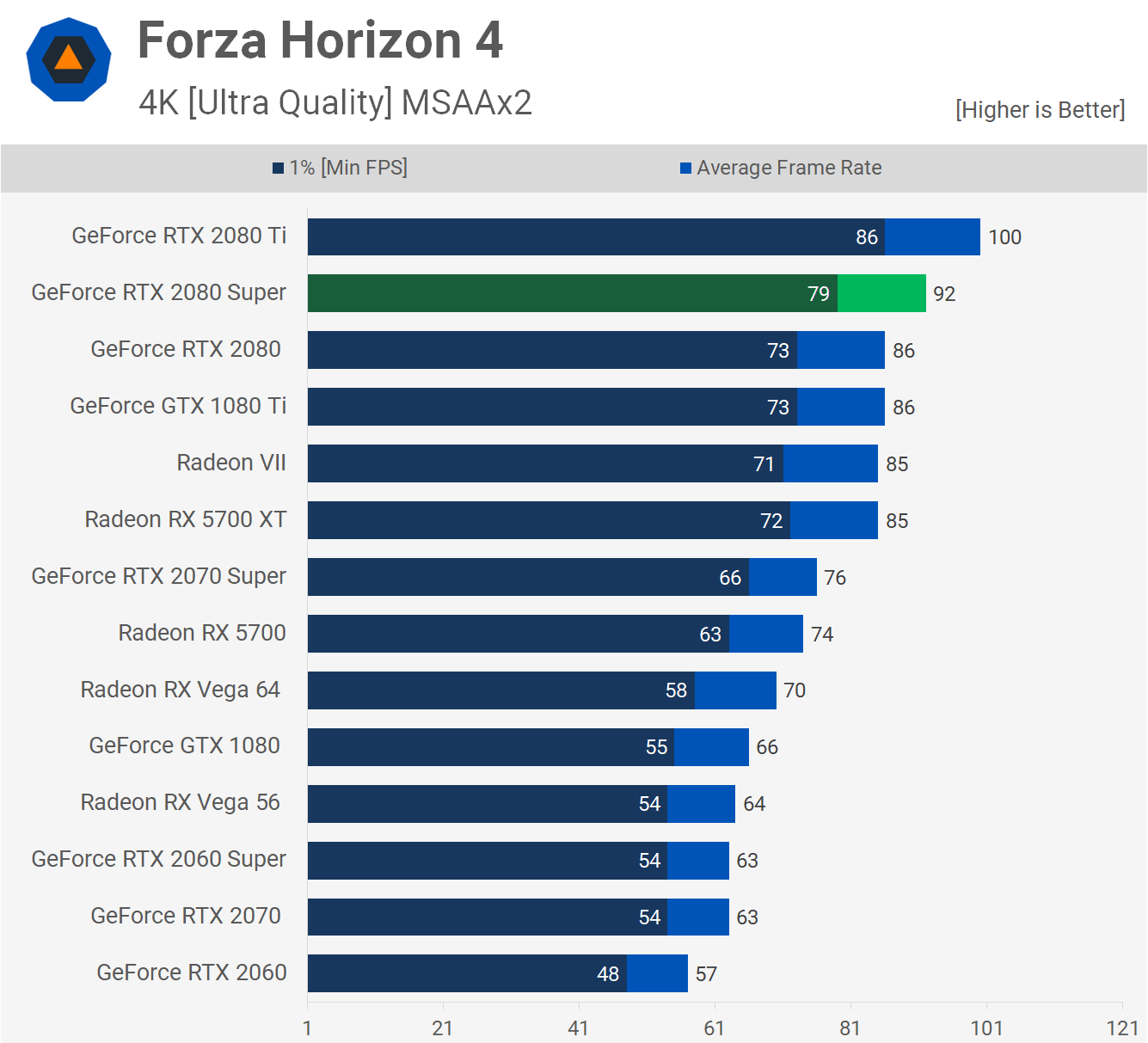 We also see a 6% performance boost in Far Cry New Dawn which allowed the 2080 Super to just edge out the Radeon VII. 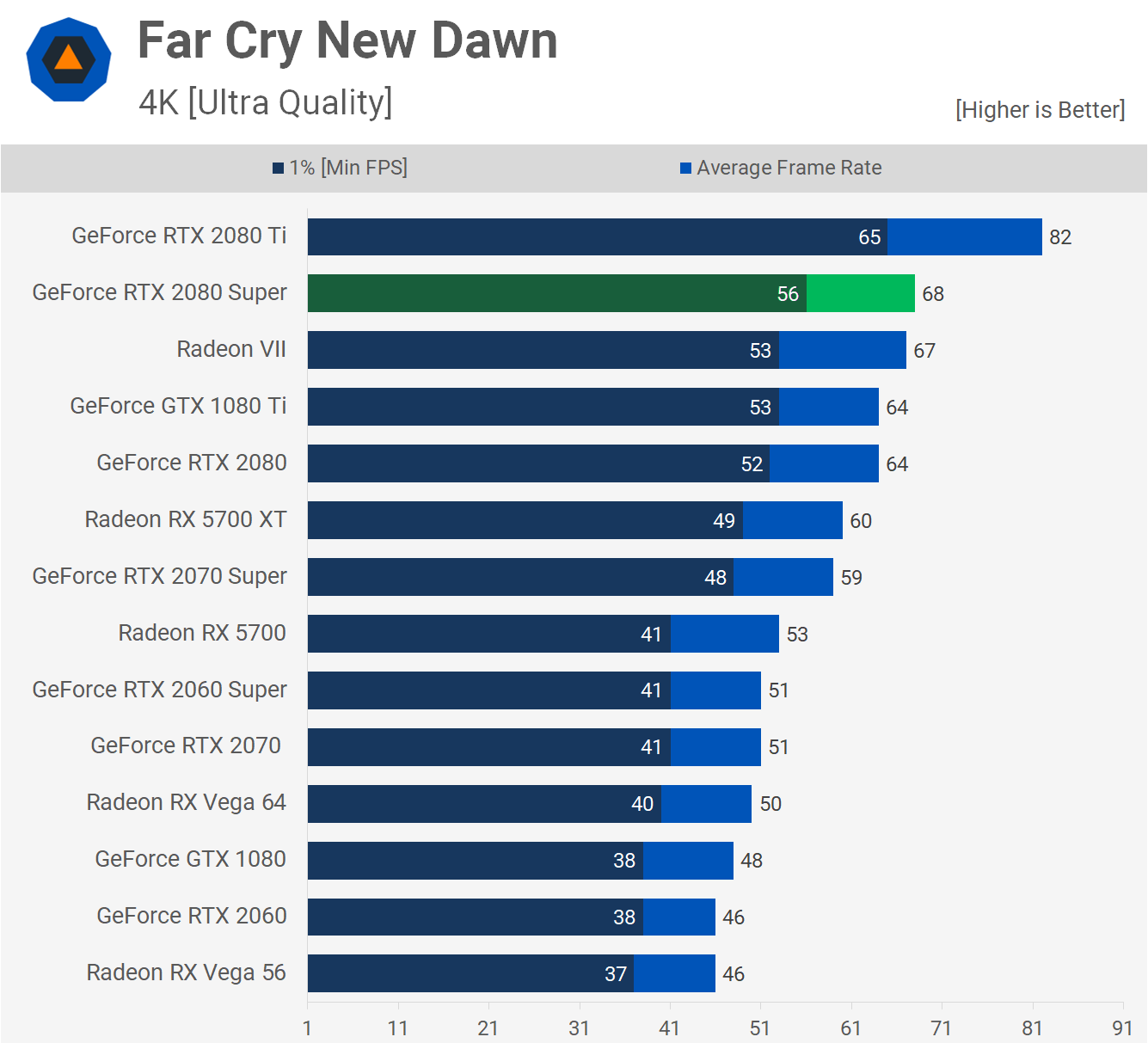 The 2080 Super provided a 4% performance improvement from the standard 2080 in World War Z. 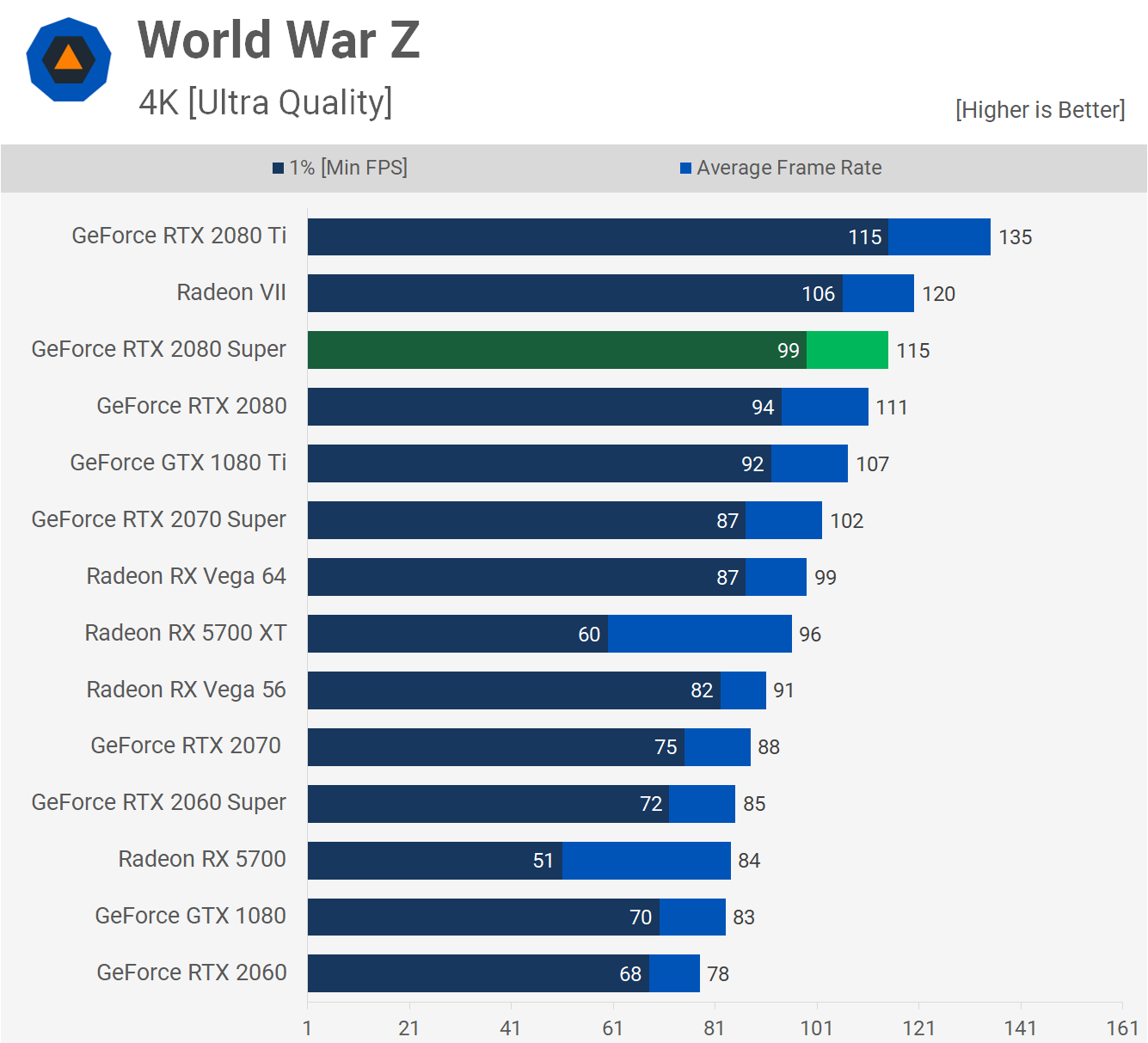 Finally we have Assassin’s Creed: Odyssey for a 3 fps performance uplift, though that does equate to a 6% increase in frame rate. 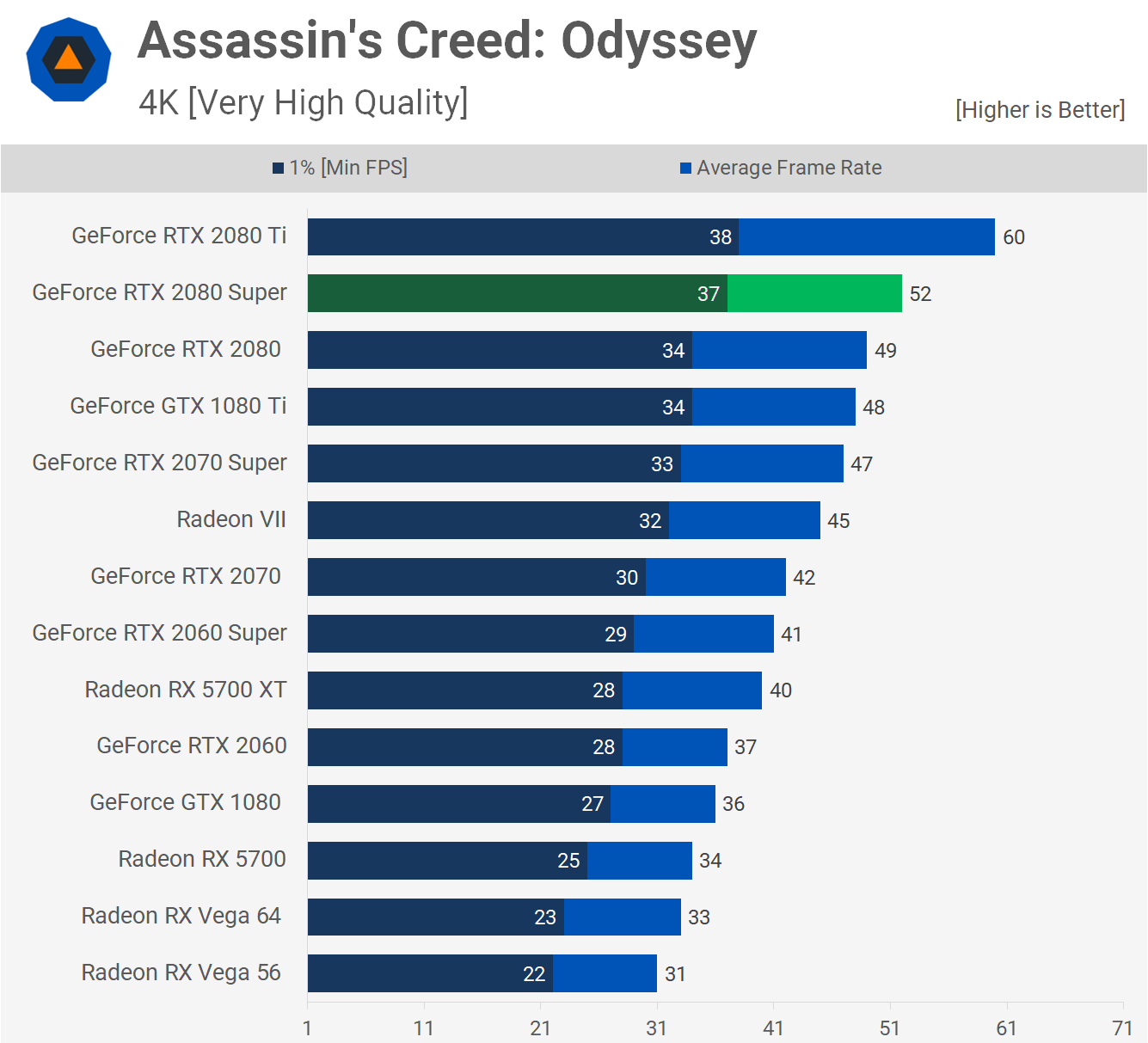 The RTX 2080 Super consumes 5% more power than the standard 2080, which sounds right given the specs and what we just saw performance-wise. This means it consumed 6% less power than the Radeon VII, but 24% more than the new 5700 XT. 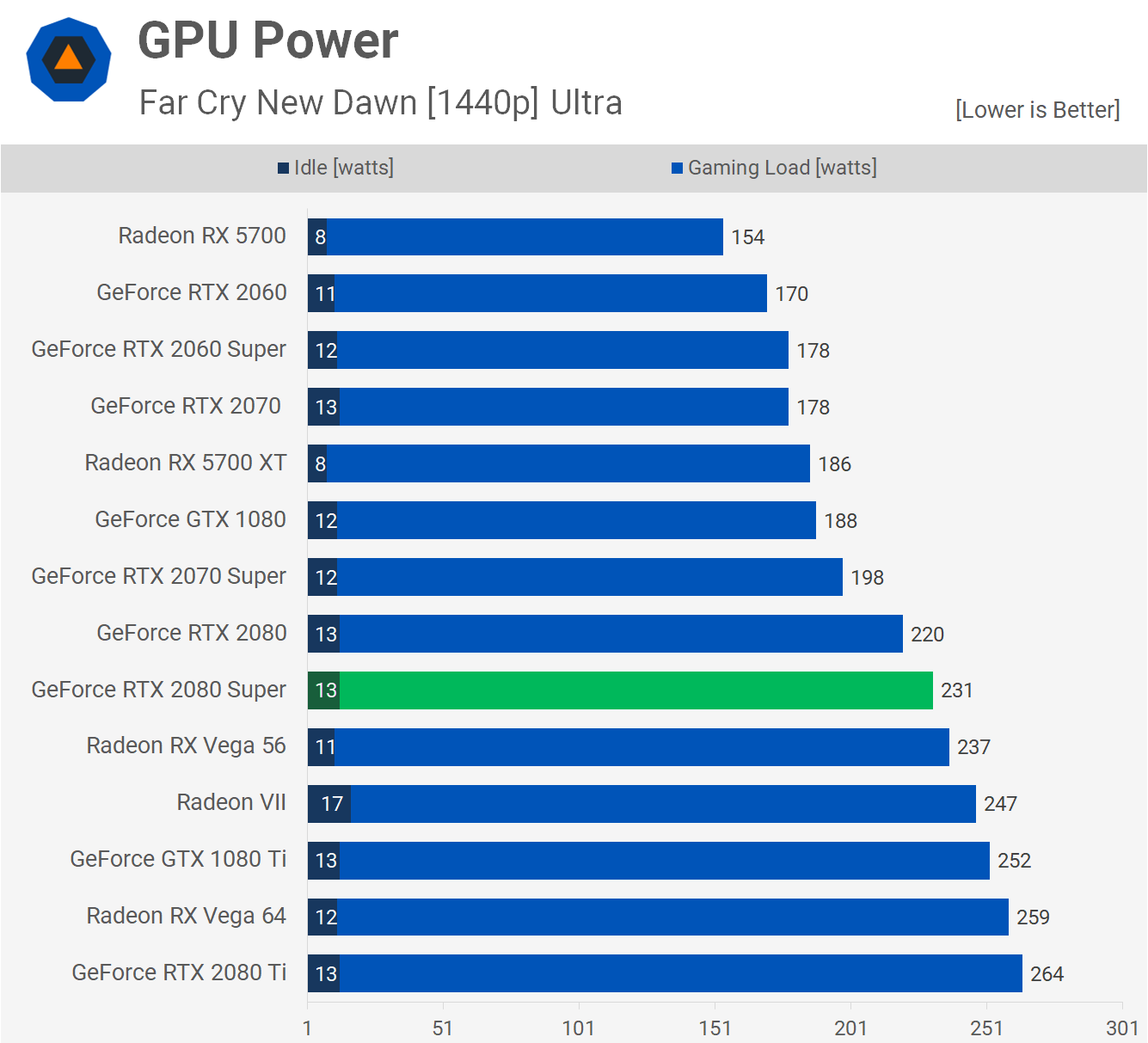 We also measured total system consumption from the wall and here we see the faster 2080 Super increased total draw by 12% over the standard 2080. There are a few reasons for this increase, the GDDR6 memory will be consuming more power given the 11% overclock, and the CPU will also be working slightly harder given the increase in performance. What’s interesting is that the 2080 Super does push system consumption higher than that of the Radeon VII. 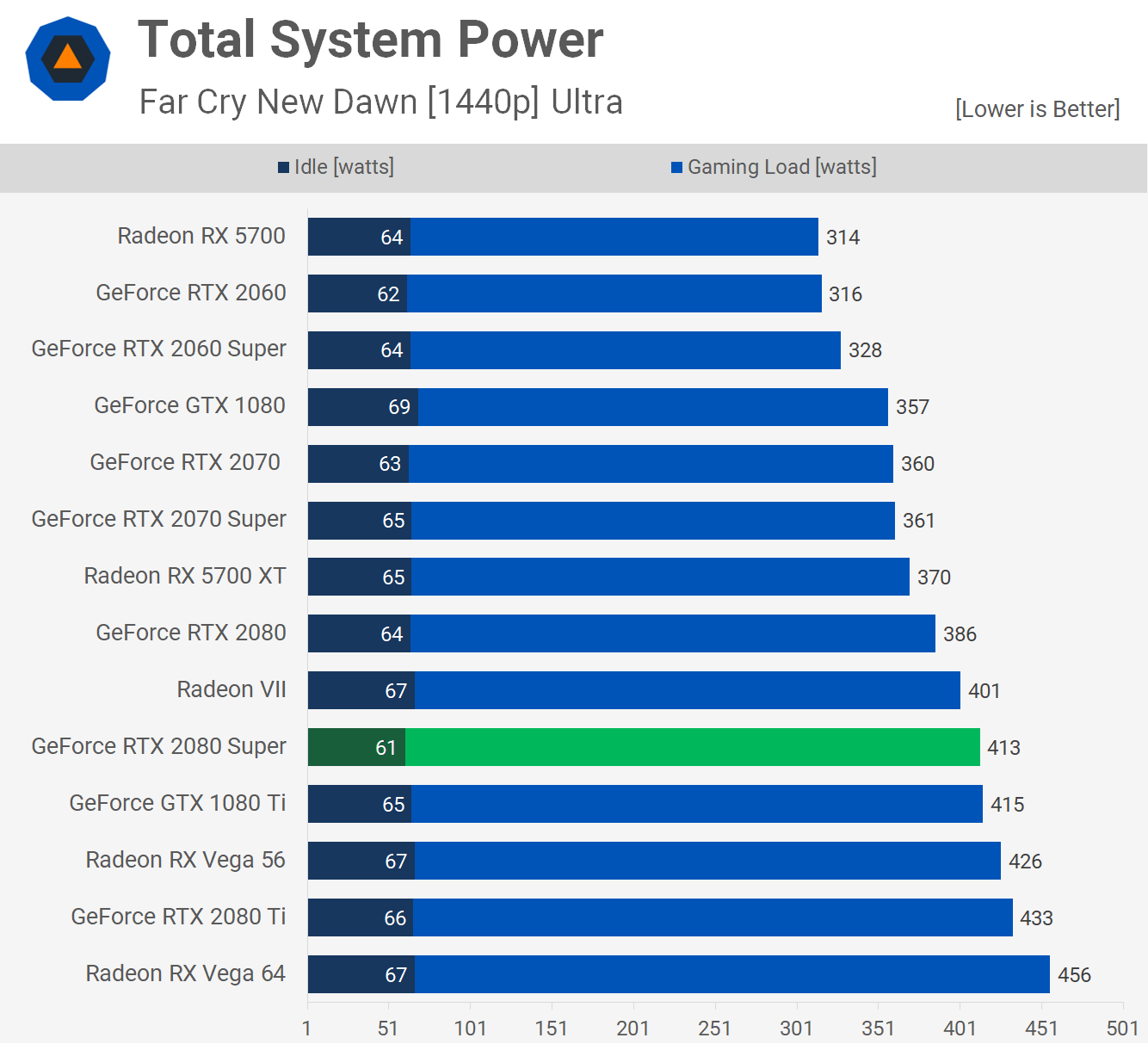 We won’t go into overclocking as with all Turing GPUs you’re likely looking at a ~10% performance boost at best through manual tinkering. The Founders Edition model we tested maxed out at 72 degrees in a 21 degree room and there it maintained a core clock speed of 1905 MHz with a fan speed of 1820 RPM, making this graphics card rather cool and quiet after an hour-long test in F1 2019.

The RTX 2080 Super looks to be the least “super” graphics card from Nvidia yet, but before we get too bummed out with this release, let’s take a look at some performance breakdown graphs and cost per frame data.

On average the 2080 Super was 5% faster than the standard 2080. For testing we used the MSI RTX 2080 Duke which comes with a modest overclock that sees it maintain 1905 MHz under load, the same operating frequency as the 2080 Super FE card. 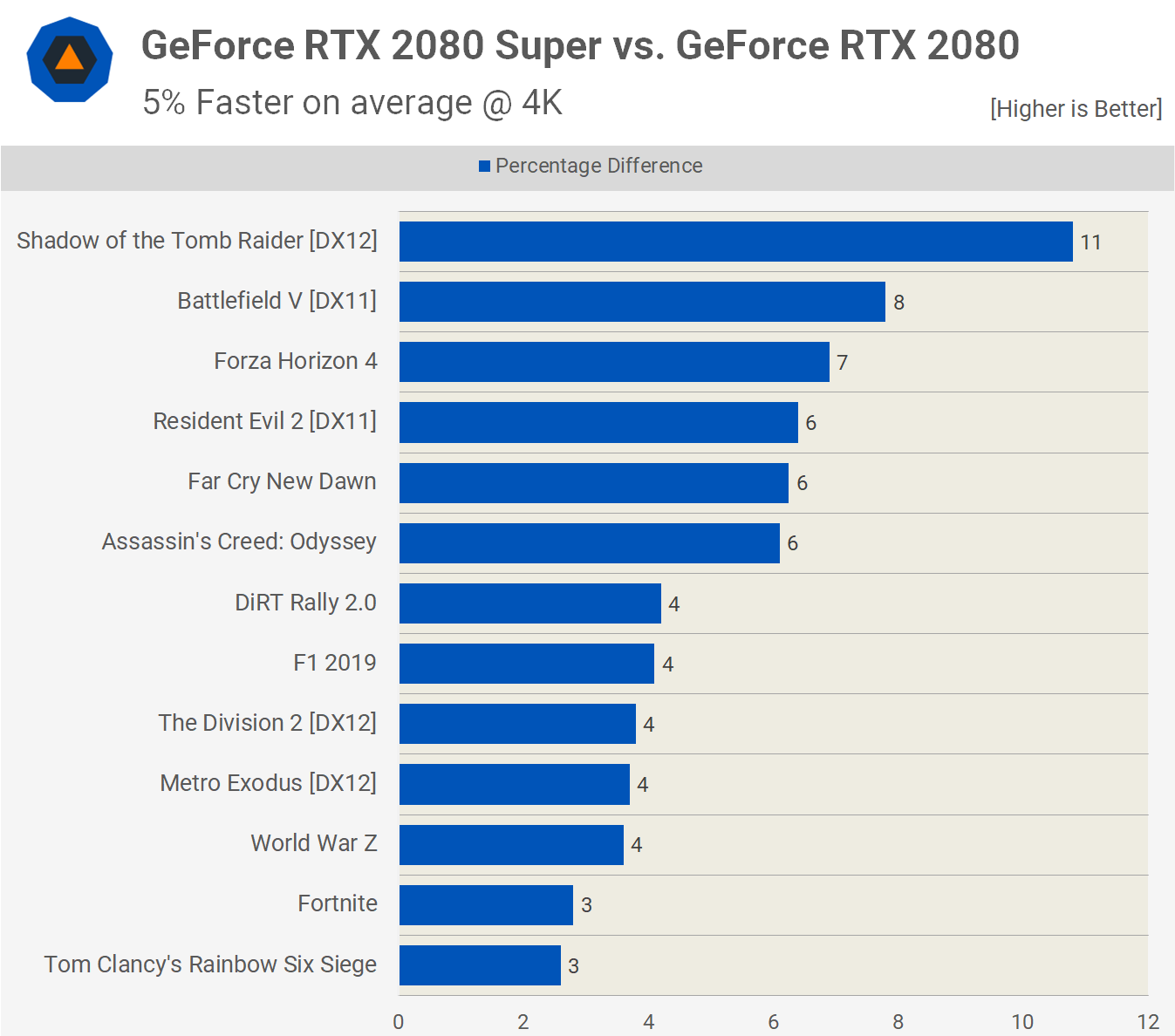 For those of you gaming at 1440p on average you’re looking at a 6% performance uplift, similar to what we saw at 4K. Those of you who were planning to jump the gun anyway, will see some extra frames for the same price, so there’s that. 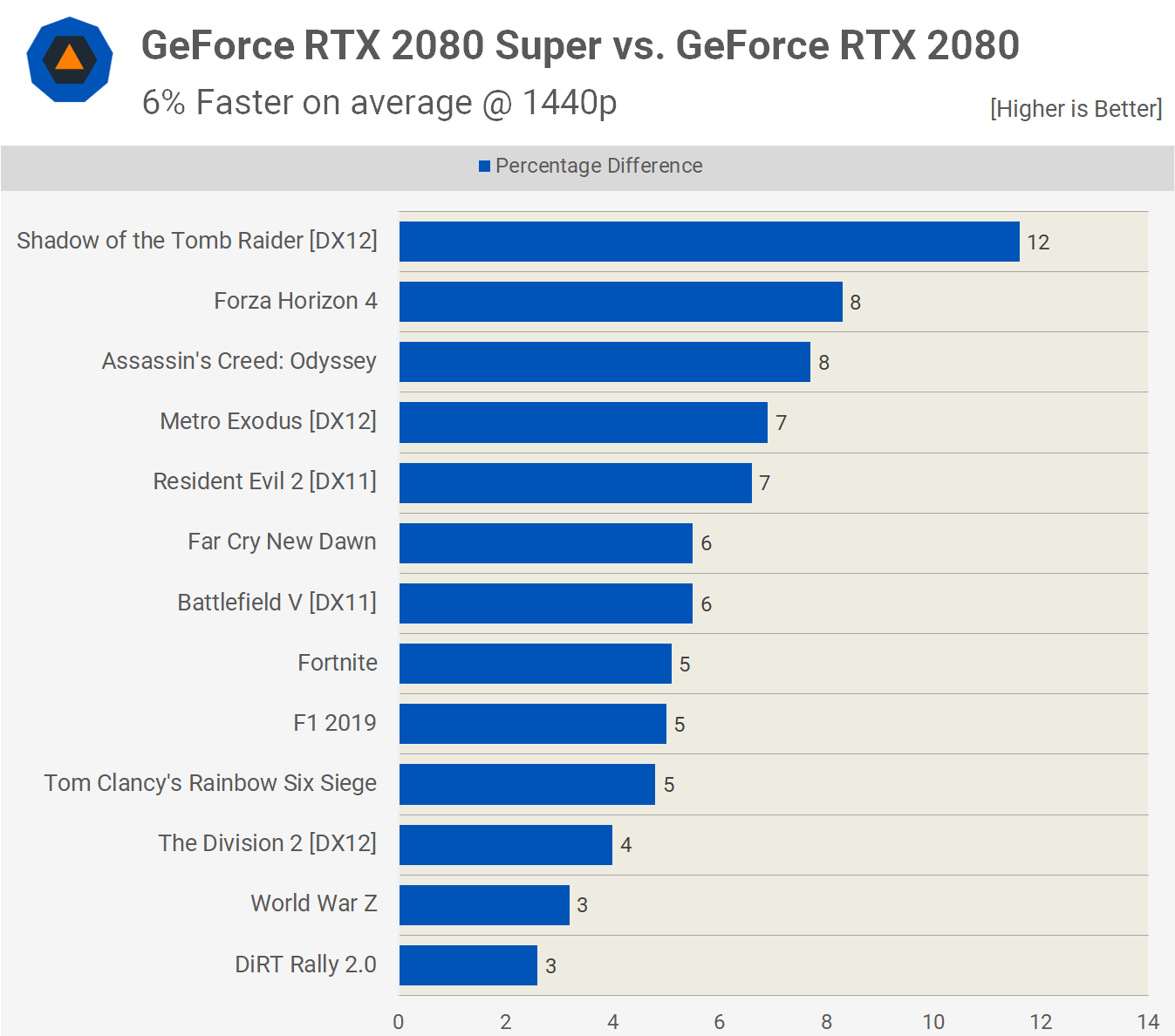 On average the RTX 2080 Super was 16% slower when compared to the 2080 Ti. This is not a massive difference and it is around 30% cheaper, so if you’re not after the most premium 4K experience possible, the 2080 Super looks to be a decent option. 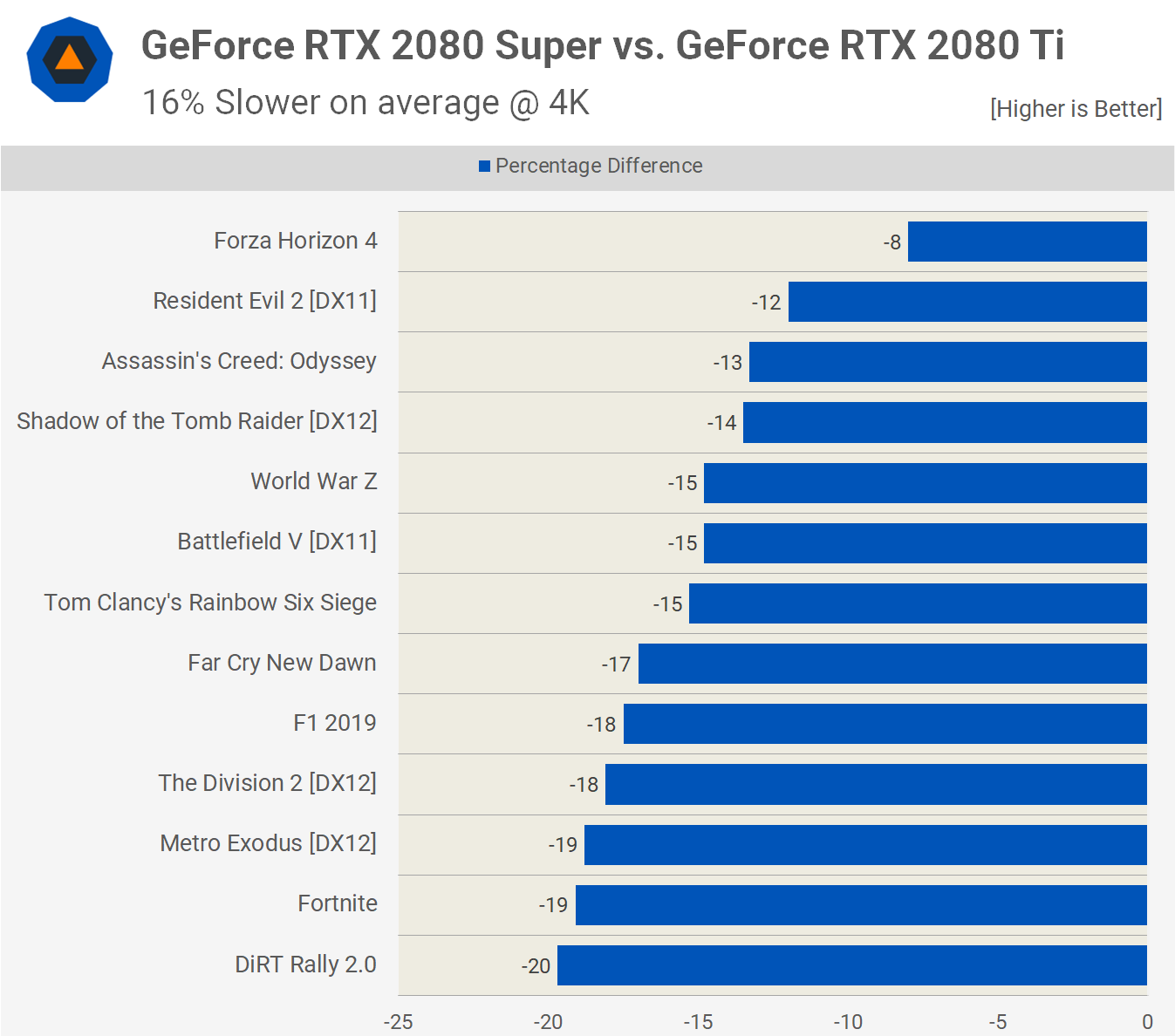 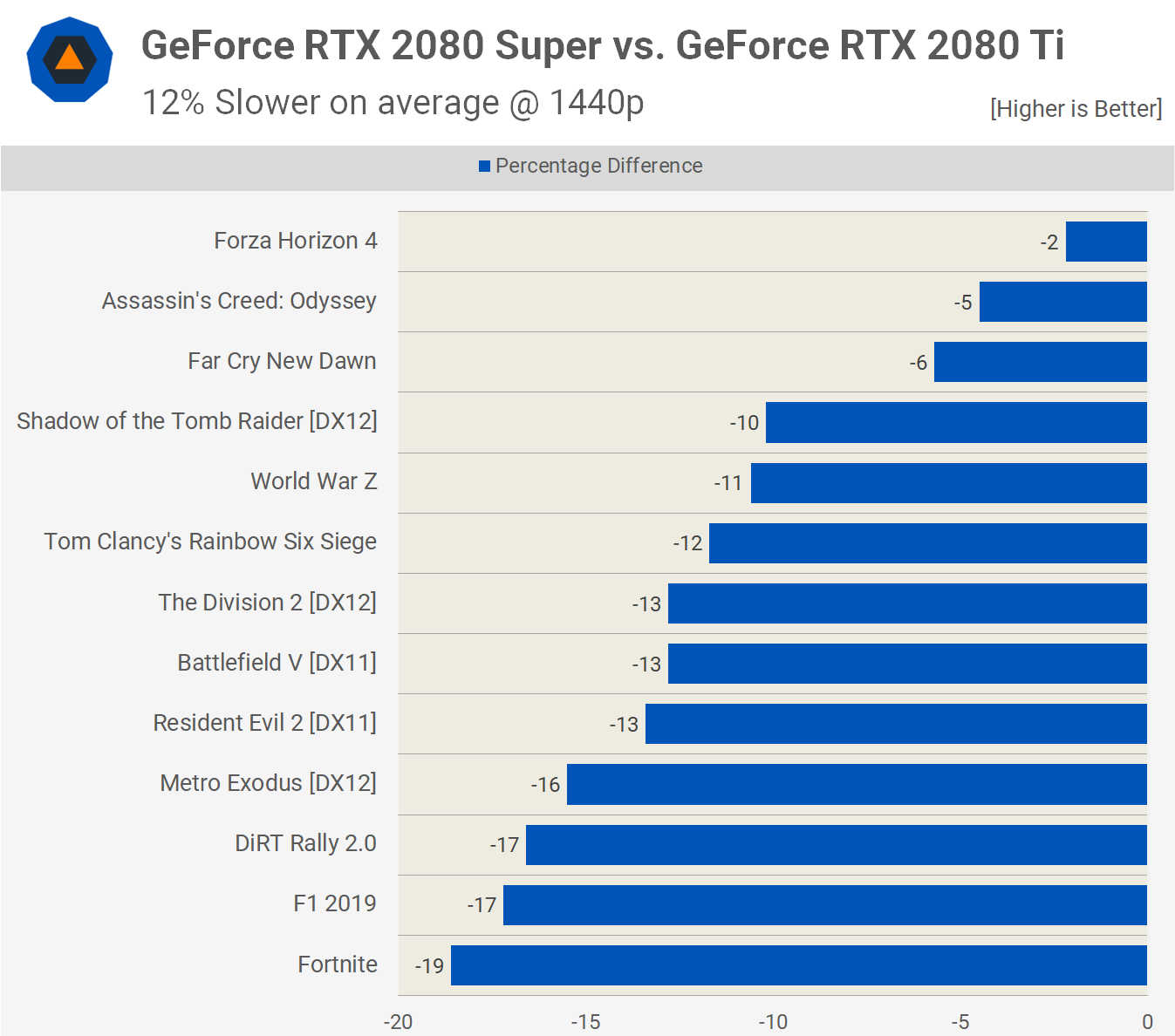 When compared to AMD’s new $649 Radeon RX 5700 XT, the 2080 Super was on average 26% faster at 4K. Do consider that the 2080 is considerably more expensive, yet the GeForce was never more than 47% faster. Evidently the higher you go, the less value you get so you’ll have to decide if paying that kind of price premium for the ability to run at slightly higher quality settings is worth it. 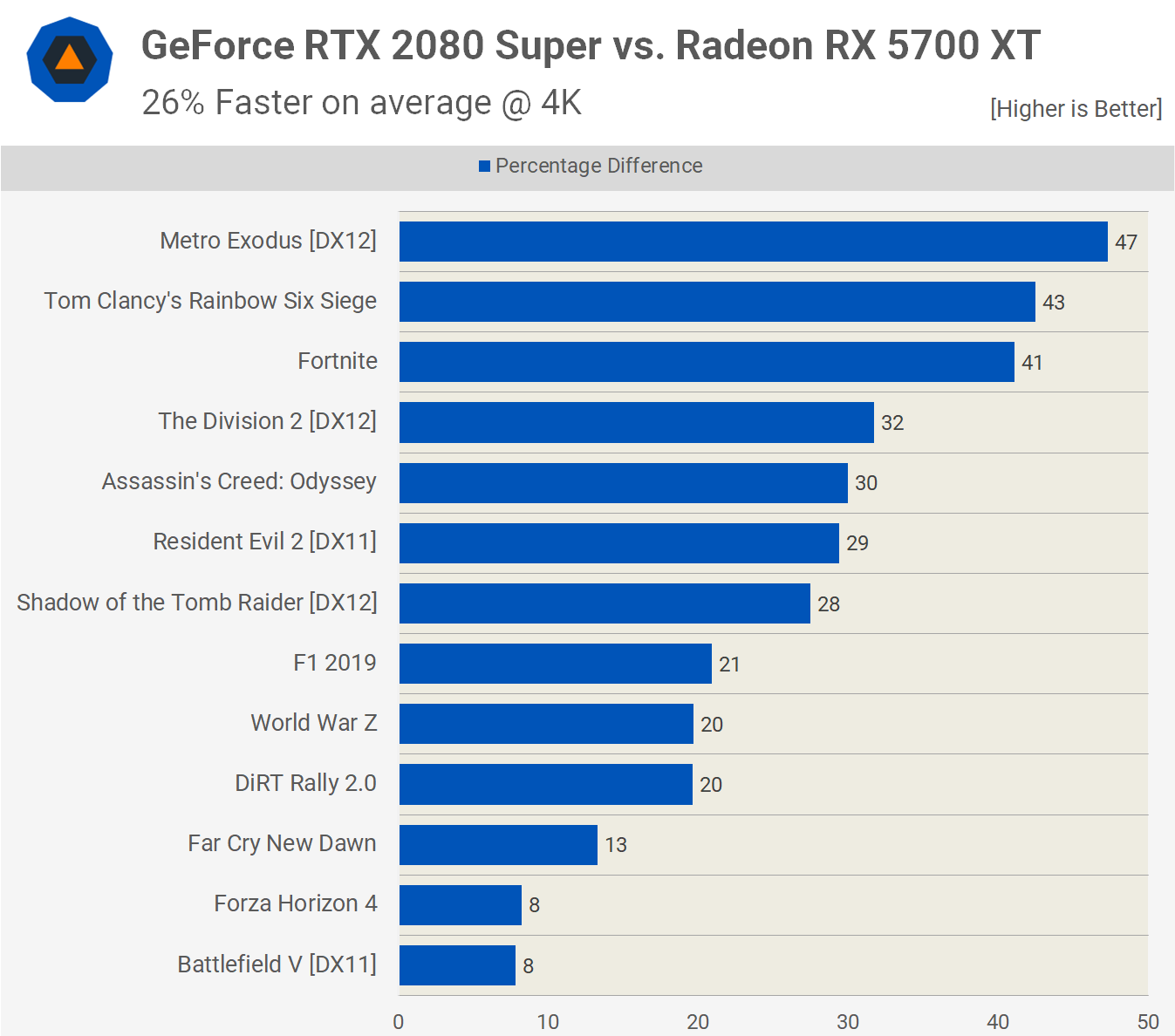 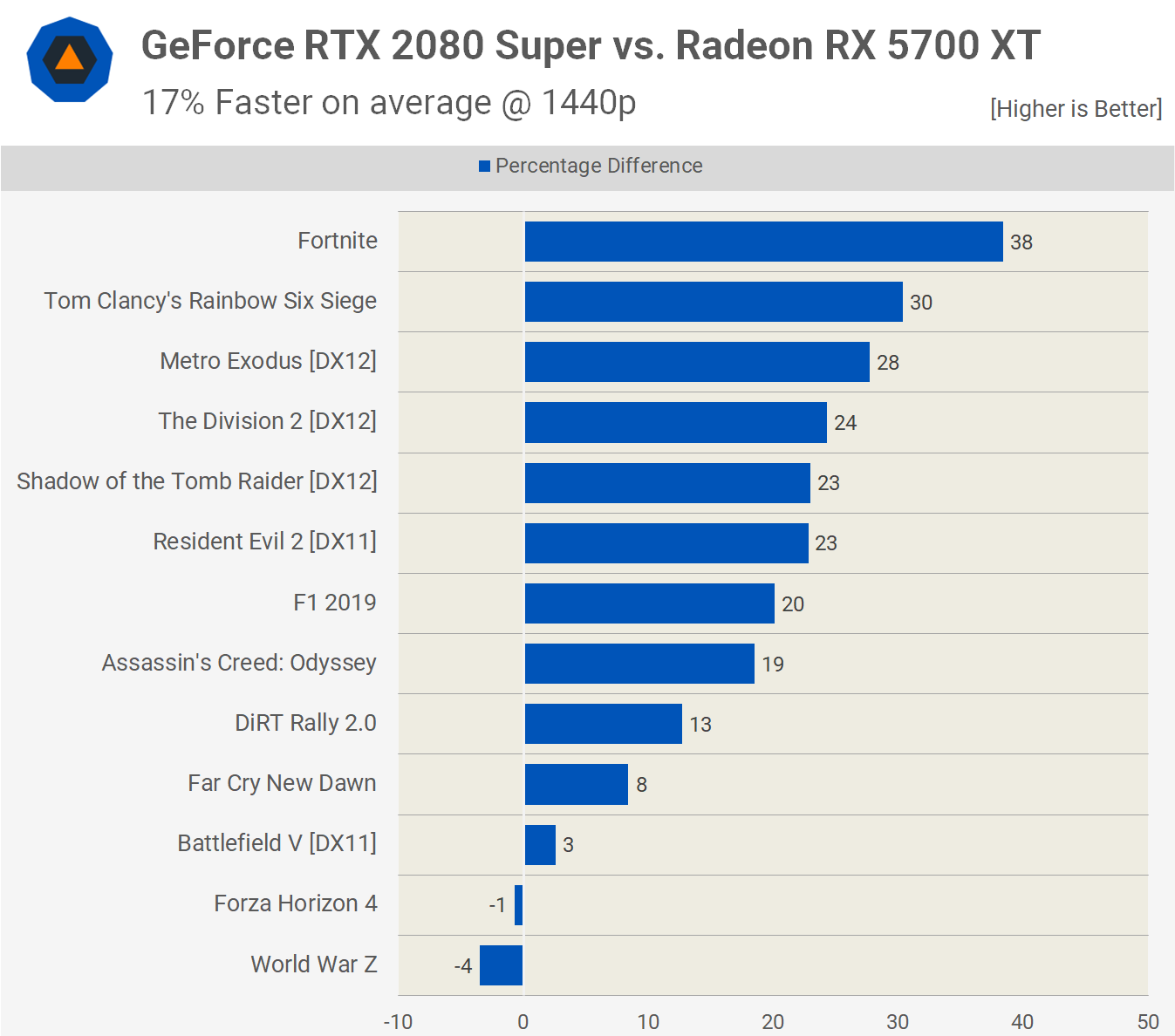 Cost per Frame and Conclusion

Starting with a MSRP comparison and using the 4K gaming data, we see that the RTX 2080 Super comes out at a cost of $US9.85 ($14) per frame. Given it comes in at the same $1249 MSRP as the original 2080, that makes it roughly 6% cheaper per frame. Compared to the 5700 XT you are paying 41% more per frame which is a massive price premium, but that’s just what you’re faced with when going up a level in performance. 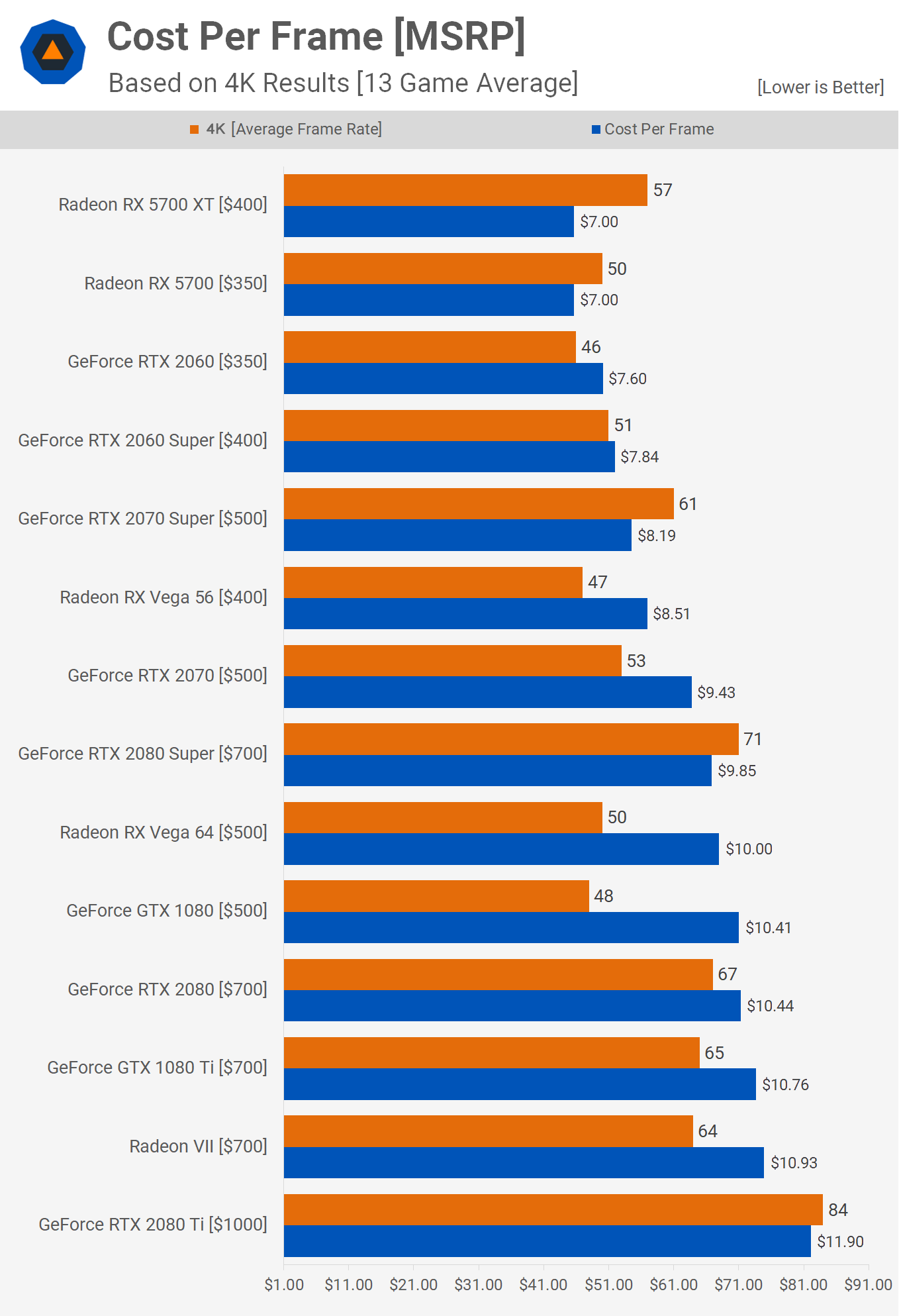 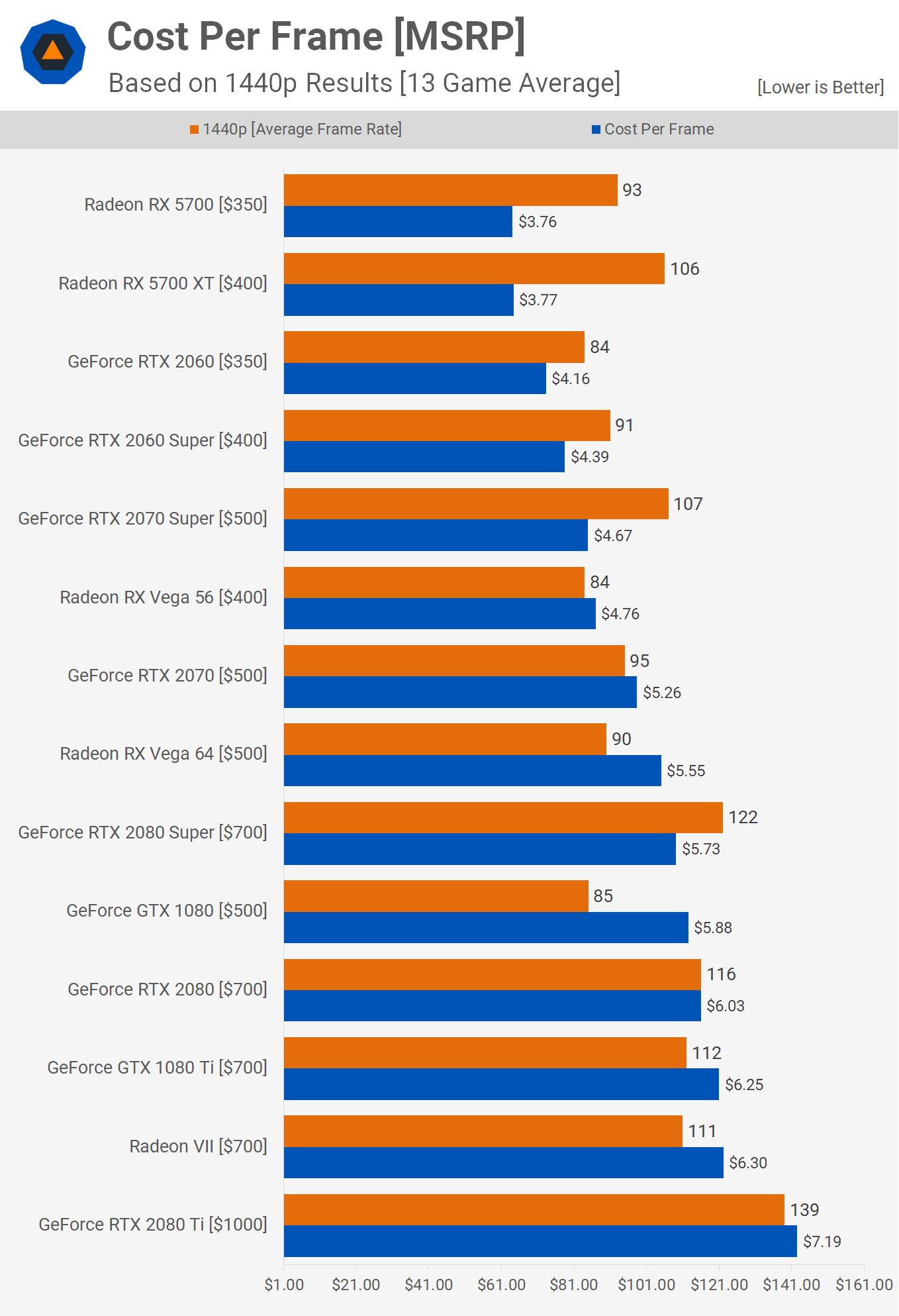 But what about current market pricing? The only major change in the analysis would be that the RTX 2080 Super will keep its price, while soon to be extinguished RTX 2080 cards have dropped down to $899 for some models. In that case the standard 2080 offers a better value given the small change in performance. 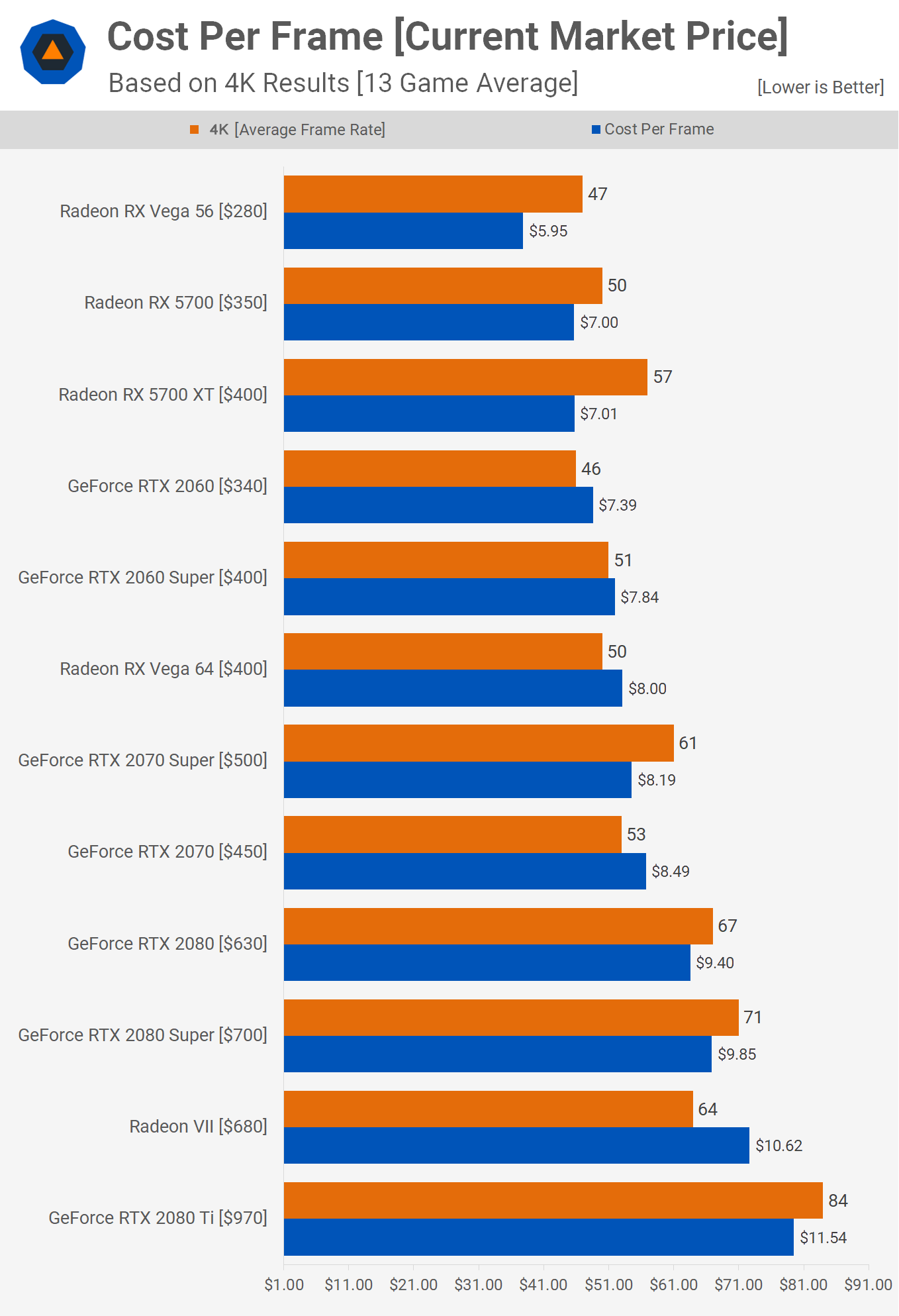 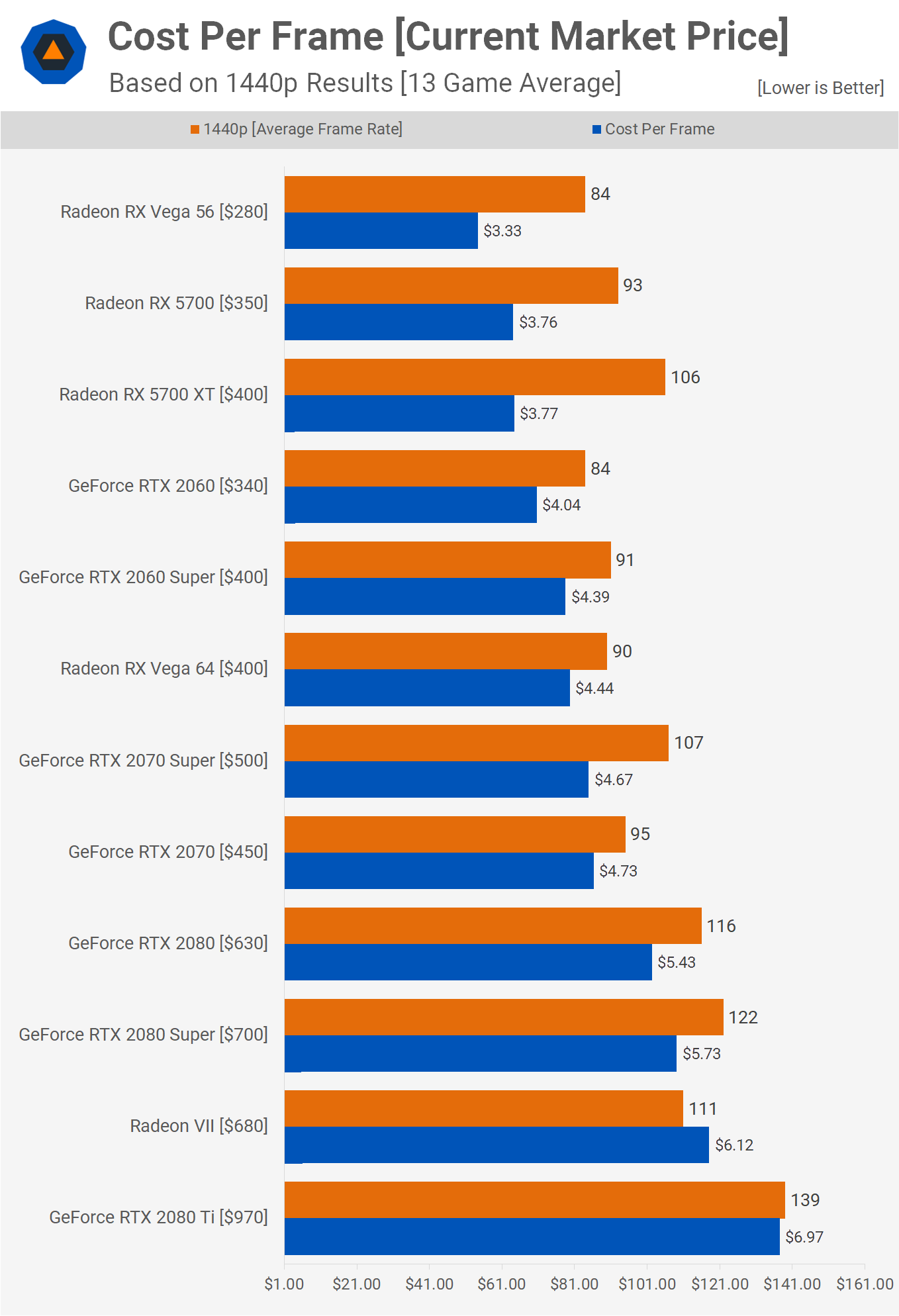 Earlier this month we got the RTX 2070 Super and 2060 Super. The 2070 Super provides 12% more performance than the standard model and we liked the boost enough to kill off most competitors at this price point, though the Radeon RX 5700 XT comes very close in performance for less money. The 2060 Super, on the other hand, gave us nothing. It costs 18% more than the standard 2060 and was just 8% faster on average. We’re seeing a similar story with the RTX 2080 Super, where the performance lift is even less significant. 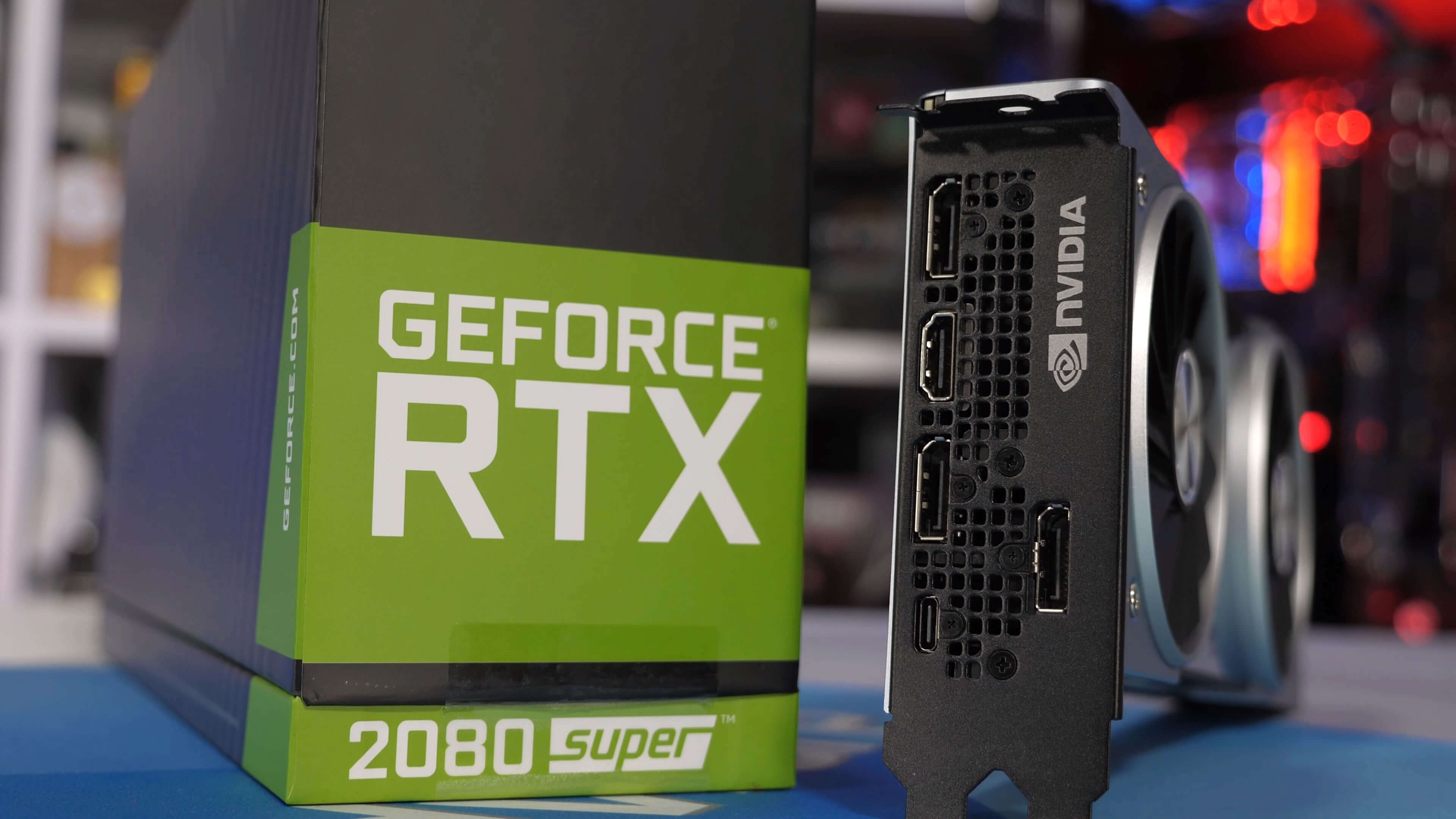 Overall, the RTX 2080 Super is a solid premium-priced GPU, it’s just not particularly exciting. Officially discounting the RTX 2080 to $899 would have been worlds more thrilling in our opinion. Put in other words, the RTX 2080 Super is ~9% faster on average than the GTX 1080 Ti at both 1440p and 4K. So we’re getting a performance boost, at the exact same price point, almost two and a half years later. Without a doubt, GTX 1080 Ti owners can rejoice at the news.