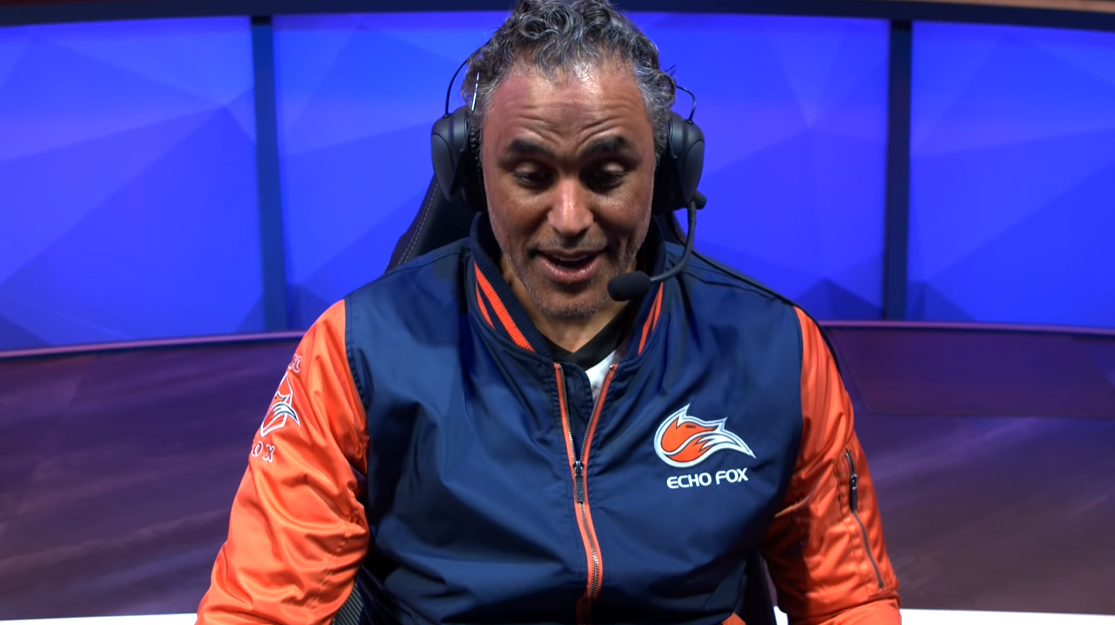 Screenshot: LoL Esports, <a href="https://www.youtube.com/watch?v=ryEkW0SEg9I">YouTube</a>
To sign up for our daily newsletter covering the latest news, features and reviews, head HERE. For a running feed of all our stories, follow us on Twitter HERE. Or you can bookmark the Kotaku Australia homepage to visit whenever you need a news fix.

In a new interview with The Richard Lewis Show, Rick Fox accused fellow Team Echo Fox investor Amit Raizada of being a “bully,” “self-dealing,” and holding the company “hostage.”

“For me, unfortunately, two years in I discover the nature of who he is, and shame on me for not going to Google,” Fox said during the interview. “My son says all the time, ‘Dad, just Google it.’ I come from an era where, you know, I read the newspaper. I learned that lesson.”

The hour-long discussion with Lewis comes after months of controversy stemming from racist comments made by Raizada aimed at another business partner, and on the eve of a reported $US30.25 ($44) million deal to sell Echo Fox’s slot in the League of Legends Championship Series (LCS) to Los Angeles Rams owner Stan Kroenke.

In the interview, Fox painted a portrait of Raizada as the mastermind behind a scheme to profit off of the esports organisation’s debt by buying it up and leveraging it to increase his own investor position within the organisation.

“He was contracted to extend it, doesn’t do it, and then at that point tries to engineer a fire sale through his behaviour, because he knew that if things got to a point where even if the slot was taken, he would be the first one at the top of the totem pole to get all of the money.

According to Fox, even if the deal to sell the organisation’s LCS slot to Kroenke’s sports holding company goes through, Raizada will still remain a part of Echo Fox, which also sponsors pro players in other games like Dragon Ball FighterZ and Super Smash Bros. Ultimate, leaving its ultimate fate up in the air.

Back in April, Fox said he planned to leave the organisation due to racist comments and threats by Raizada, according to reporting by Lewis for Dexerto.

While Raizada, at the time, admitted to and apologised for racist behaviour in the past, he denied threatening Fox’s family, contrary to an email that surfaced in which he did just that. An investigation by Riot Games ensued, eventually resulting in a call for Raizada to leave Echo Fox or risk the organisation losing its spot in the LCS. Weeks after the initial deadline for Raizada to depart expired, he still hadn’t, leaving the founders of Echo Fox with no choice but to try and sell its slot to another investment group.

“What is underneath all of that is the continued ongoing struggle with an individual that is been a racist, has a history of self dealing — look, he lost a lawsuit to his last partners for self-dealing,” Fox said, referring to a 2017 lawsuit by two former business partners in which a jury eventually returned a $US6.1 ($9) million verdict against Raizada.

“I am truly hurt and pained by the false and defamatory allegations made by Rick Fox in his Dexerto interview against me and all the investors in Echo Fox. At no time have I been anything except cooperative with Echo Fox and Riot Games. Unfortunately, I wrote an email in anger to Jace Hall, the CEO of Twin Galaxies, using language that was simply wrong and for which I’ve apologised. Profusely.

That email had nothing to do with Echo Fox or Rick Fox, but he used it to vilify me in the media to the harm of the company. I’m a passive investor, and do not run the company. I have never been part of the General Partner – which is the equivalent of a CEO. Rick never invested any of his personal money into Echo Fox and now he is blaming his investors and me for his failures as the head of Echo Fox.

In fact, Riot declared a default of the LCS agreement for several reasons, including multiple financial breaches that occurred while Rick was running the company. I did not place a gun to the company’s head nor was I a bully. The company was failing under Rick’s leadership after he removed Stratton Sclavos who built the company and created most if not all the value.

Rick made several pleas to all investors for money to make payroll or pay players and teams. Rick not only approved the debt conversion and the waterfall changes about which he complains, but he sent multiple letters to the investors explaining that the transaction was good for the company, gave me an indemnity and full release of all claims. Rick and every investor in the company signed the amended partnership agreement that contained the waterfall change.

I am not the only investor who converted debt or purchased senior preferred equity in the company — all partners were asked to participate. Those transactions single handedly allowed the company to continue operating through today, as Rick had no other funding sources.

I was rewarded by Rick falsely calling me a racist, blaming me and the other investors for his actions that essentially bankrupted the company, and accusing me of fraud in connection with covenants agreed to and signed by Rick and all the partners. The only person who is not a victim and is crying wolf is Rick Fox.”