Sega’s ActRaiser Successor Is Not Good

1990’s ActRaiser is a pleasant mix of basic top-down strategy and side-scrolling platforming action that’s simple and satisfying. Sega’s SolSeraph, released today for PC, PlayStation 4, Switch and Xbox One, takes the same basic concept as the Super Nintendo classic and turns it into an unwieldy mess.

Sega’s surprise announcement of SolSeraph two weeks ago had fans of ActRaiser hopeful for a spiritual sequel that did the original game justice. The idea is the same. The plot, involving a deity fighting monsters and demons while helping humanity grow and flourish, is the same. The naming convention is the same. Developer Ace Team even tapped ActRaiser’s composer, Yuzo Koshiro, to create the opening theme for SolSeraph. The opening tune is nice, but consider those hopes dashed.

The main difference between ActRaiser and SolSeraph is that everything in the newer game is too complex. It opens with the player character, in the role of Helios, the Knight of Dawn, battling his way through an extended platforming sequence.

He’s got a sword to swing. He’s got arrows that require mana to fire and have a hard time aiming diagonally. He can block attacks with his shield and dash backwards to dodge. There’s another dash that involves holding the block button and moving backwards. Helios can double jump to reach high ledges, but the move only works from a very specific angle. It’s clumsy. 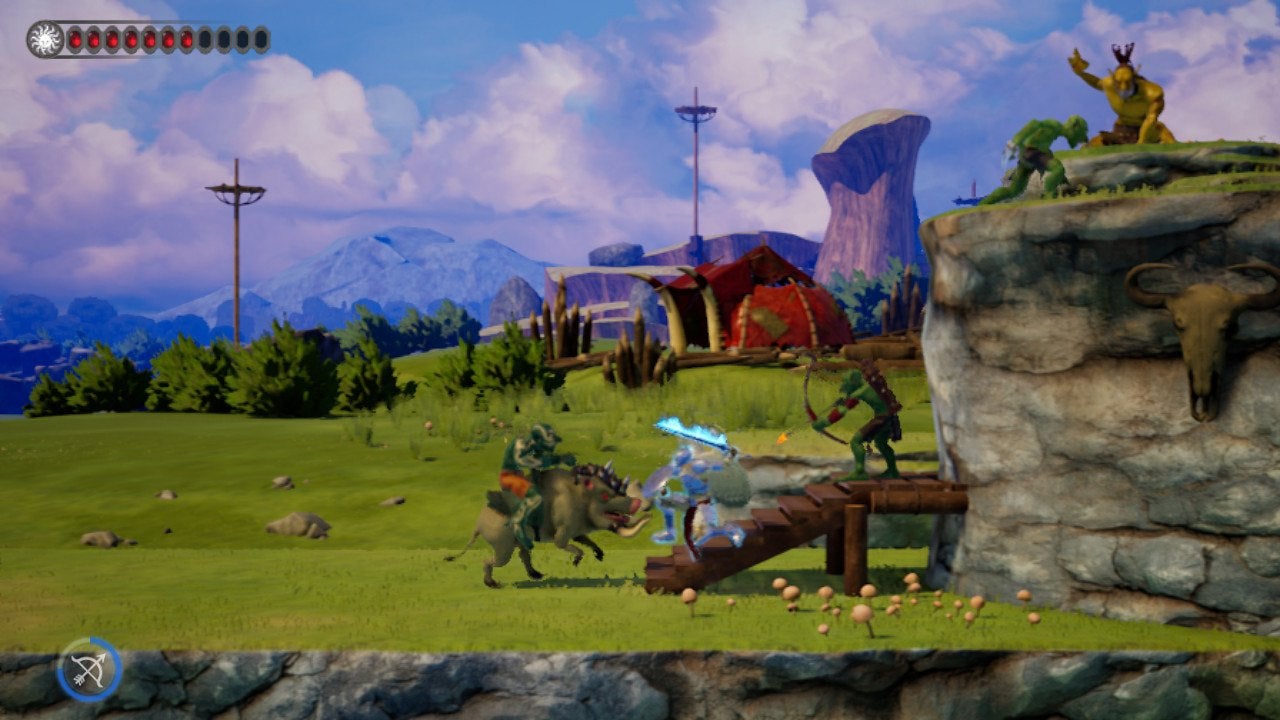 Once Helios completes the side-scrolling platform level, the game switches to a top-down view for the strategy portion. ActRaiser had the protagonist shooting flying creatures and protecting humans while they built their own society. He’d point them in a direction and they’d expand, taking down monster lairs, uncovering artefacts and items for the player to use. The idea was that as humanity grew, so did the player’s power. Again, pretty simple. 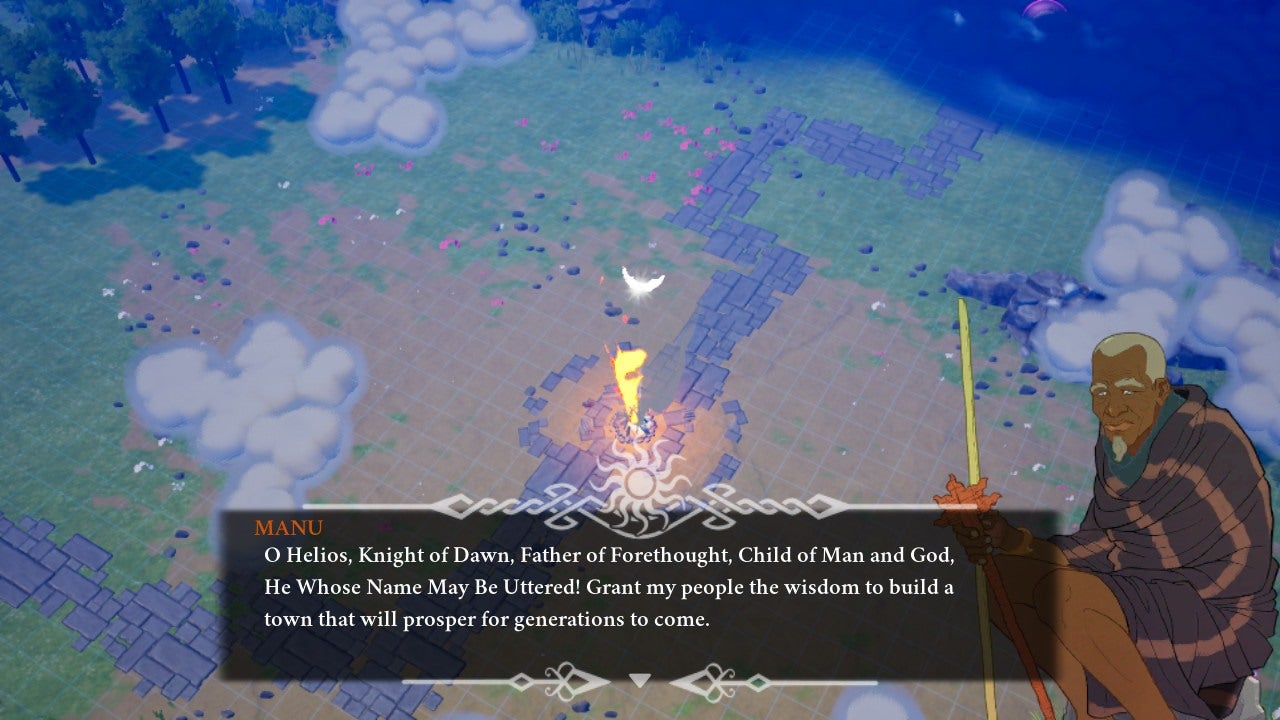 In SolSeraph, the player is responsible for a lot more. Starting from a central bonfire, the player must create a village, building by building. First come villager huts, to provide workers. Then some roads to trees so they can build logging camps. Wood is needed to build defensive structures like barracks and archery towers. Each building needs to be staffed by a certain number of workers. It’s a juggling act between workers and wood and food.

That’s just the beginning of the player’s concerns. The village is built along a stone road, and at regular intervals, enemies spawn from bases along the road, marching towards the village to wreak havoc on humanity. You can place barracks, archery towers and traps along the path to try and keep enemies at bay. Helios has powers he can use to slow down creatures, like casting lightning bolts or spawning an avatar in their path. 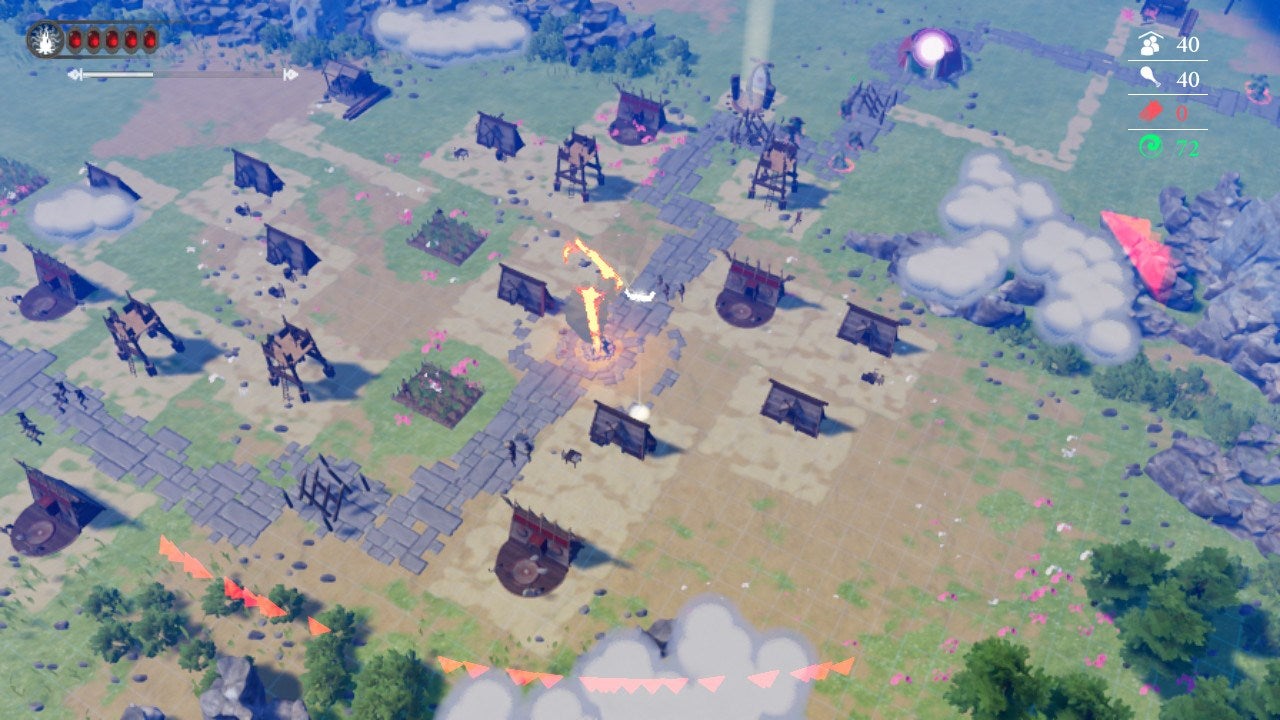 It’s tower defence, but it’s even more complex than that. The player must expand the village in order to create temples near black clouds on the fringes of the map. Temples clear the fog and expose enemy bases. Once exposed, Helios can dive into the base and defeat waves of random enemies in 2D side-scrolling combat in order to “conquer” it. I put conquer in quotes because dispatching all of the enemies does not destroy the base. It still regularly spawns waves of attackers. Helios just gains a bit more mana so he can use more of his godly powers, and the village can expand to the next lair.

It’s a lot to do, maintaining buildings, moving around villagers, keeping track of monsters attacking from both ends of the stone path. It’s easy to lose track of resources. When logging camps run out of trees, the workers just sit there, doing nothing, until you go to the building and un-assign them, freeing them up to work elsewhere. The game never told me that. The game never really explained the godly powers Helios had at his disposal. I had to discover that on my own.

Sometimes that is fun, but when you’re being attacked on all sides and trying to build defences only to realise you need more wood so you have to build roads and a logging camp and a house so the camp needs workers and ARRRRGHHHH.

Also not helping is the story that unfolds while all of this going on. Something about a daughter who has lost her faith and a grandfather who is devoted to the worship of Helios. Their back-and-forth dialog pops up at the worst times, interrupting complex plans and cancelling out selections I’m trying to make in the game’s radial menu.

It’s all too much, too fast.

SolSeraph is no ActRaiser. If anything, it made me want to go back and play the SNES classic all over again. The simple platforming. The self-building cities. That’s what being a deity should be all about.