Star Wars: Galaxy’s Edge FOMO Has Turned Me Into A Garbage Monster, And I Hate It

Ever since a whole new land. “Sounds neat, but it’s on the other side of the planet, I’ll never go so why think about it?” I’d tell myself, a man who cares a lot about Star Wars but not a lot about theme parks. Oh, what a fool I was.

It was easy to stay like that in the early days, simply because Galaxy’s Edge—or just “Star Wars Land” as we knew it then—was so ephemeral, and only existed in concept art and buzzwords. It could enter and exit my mind with the same breeze it would enter and exit the news cycle over the past four years.

Fly the Millennium Falcon? That’s not an X-Wing, pass. Your decisions there will have consequences? Seems a bit extra for a theme park, but ok, sure! It exists as a giant model now? That’s nice. And then it existed as a bunch of construction work? Cool, I guess. It’s got a name, and it’s trying to lean all-in on this ‘in-universe’ setting with new lore and accompanying tie-ins? Seems real extra for a theme park, but hey! I don’t care about going, so I guess at the least I could just read Galaxy’s Edge: The Theme Park: The Comic and that’s basically the same thing, right?

Not even having a Galaxy’s Edge evangelist on io9’s staff—in the form of my wonderful co-worker, Germain Lussier—could sway me, when he came back from his first media preview of the land earlier this year breathless with excitement. Life would never be the same, he cried! I’m sure it would. He learned 77 extremely fascinating things! I was willing to bet that 30—at most—were actually fascinating, and the rest were just fun things that were fine. You wouldn’t get me interested, Disney, out there on what might as well be the Galaxy’s Edge, to a lowly Star Wars geek in the middle of England. 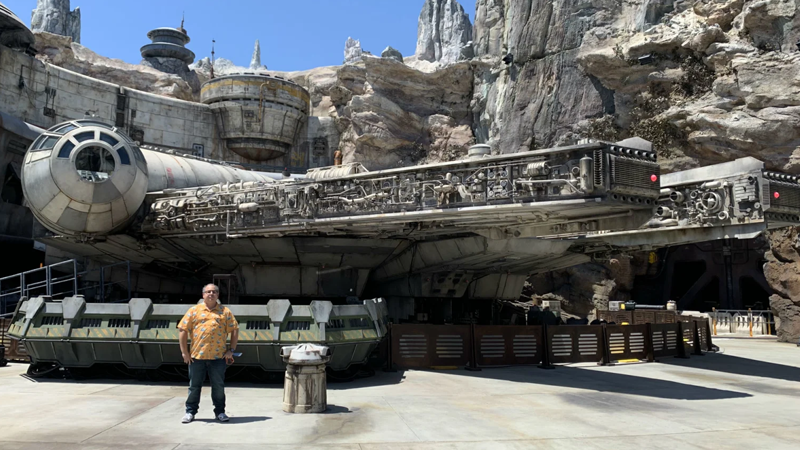 Germain in front of his pride and joy earlier this year. (Photo: Germain Lussier)

But then Germain went again. And it was real-er, this time, because the damn thing actually had an opening date, and he bought back enough pictures of everything that you could actually see that, well, they’d made a chunk of new Star Wars and plonked it right into Anaheim, California. I’d softened, reading his blogs and seeing him type away in io9’s work slack about all the little things he’d spotted, or his joy of seeing his beloved Falcon in the flesh. It’s still no X-Wing, by the by, but the first, innocent sparks of wanderlust had begun to light a fire in me, one I didn’t realise was about to burn through my entire mental faculties in the coming weeks.

“It sounds cool,” I’d tell him between the eager reports. “Maybe I’ll go some day. Some day.” It’s easier to keep the wanderlust at bay if you only barely give into it—acknowledging that, as Yoda would tell us, always in motion, the future is. Then the reservation windows came and went, and Galaxy’s Edge opened to the public, at least in some form. The pictures flooded in, of the food, and of the lightsabers, and of enough merchandise to bankrupt an entire planet’s worth of wallets.

Somewhere, deep inside my head, it was like a switch flipped. Oh no it’s real, and I would very much like to go to Star Wars, thanks.

I’m not sure what actually really sparked it. It’s not like I suddenly started liking theme parks. It’s not that I hate them, but I just never really cared about them, outside of visits to Disneyland Paris as a young child. I’d grown up into a responsible adult who collected toys, not someone who idly wandered up to rollercoasters and teacups and what have you. And it’s not like I suddenly got bit by a Star Wars bug either: that was always there, my favourite franchise, just as good, as frustrating, and as occasionally gleefully dumb as ever. But I started idly googling flights to Los Angeles, and occasionally seeing how much a stay at a Disney Hotel actually is (reader, it’s a lot). Whatever it was, I’d gotten hooked.

And I also had a very willing dealer.

He sent me a bunch of pictures of a baby sarlaac after this. It was adorable and I hated him for it. (Image: James Whitbrook/io9)

I’d like to think I had some level of restraint, but my descent into insanity knew seemingly very little in the way of boundaries. I whipped up a character backstory for the role I would play with the in-character cast members at Galaxy’s Edge (Jay Vehlen—former New Republic Y-Wing pilot turned current courier/smuggler after Mon Mothma’s demilitarization pact in the senate downsized the Defence Fleet of her homeworld and mine, Chandrila—at your service!). [Editor’s Note: With all the love in the world, I just thought “nerd” really loudly in my brain. -Jill P.]

I couldn’t stop looking at the Galaxy Edge hashtag on Twitter, seeing people’s gleeful photos as they built lightsabers, drank themed drinks, met Rey and Chewie, and did so much shopping. I started writing a wishlist of things I wanted (all of them). I started following Disneyland fan blogs, on social media and just in general, hoping for the next hit of news or another picture of some cool thing. Germain had more and more blogs to write, and I kept reading every word of them like some sort of cherished, ancient text.

Me, now, having taken a week off and realising I need to do that more than once every other year: pic.twitter.com/46XqvF9blP

I started checking what the weather was like in California day by day (the answer is “much hotter than the UK, even in winter,” by the way). I’d stay up late into the night, trawling forums and reddit threads reading people’s impressions of their time in the land. Thinking about flights and hotels quickly changed to “going part way through the process of booking flights and hotels, just to feel something.” Every night, another check through the Twitter hashtag, another hit of that Galaxy’s Edge dopamine. I became insufferable to myself. I became insufferable to my family.

Where the Galaxy's Edge wanderlust is at now, day… 7? Of unknown? pic.twitter.com/Jp3ZenhQGK

I became insufferable to my colleagues. 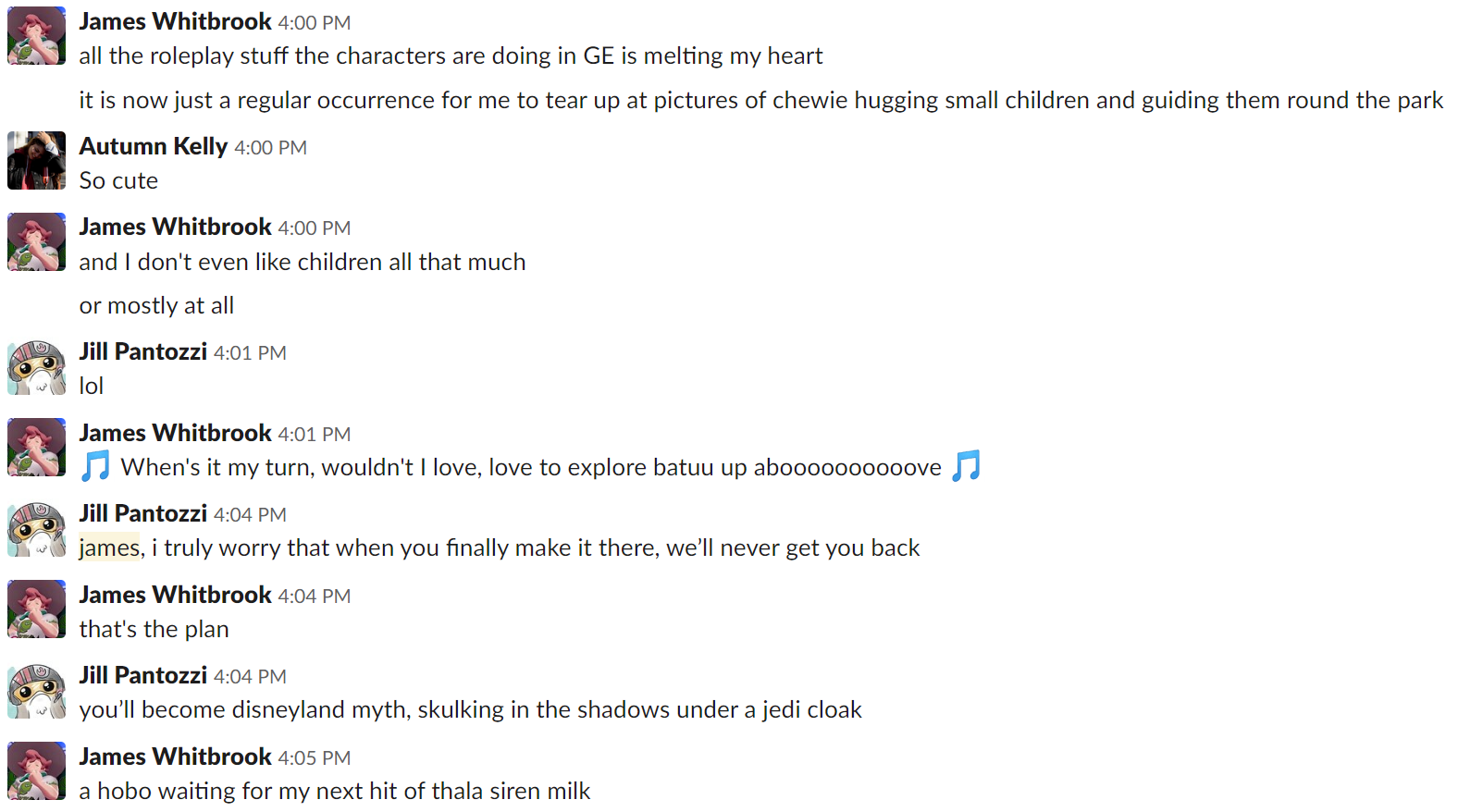 Well, more insufferable. When even they started telling me to just go every time I whined about wanting to be where the people are, you could tell I’d really gone off a deep end.

So despite the fact I tried—emphasis on the tried—to be mature about this, and at least wait for the actual main ride at Galaxy’s Edge, Rise of Resistance, to officially open (what’s the point in visiting a theme park that’s not even complete?), I buckled harder than an AT-AT walker tripped up by Wedge Antilles and Wes Janson. Mainly because I actually made plans and booked tickets for Star Wars Celebration 2020, which takes place in Anaheim next year, literally a short walk from the Disneyland parks.

Burdened with this dark, geographical knowledge, the Palpatine-esque voice in my head made its move: it doesn’t matter if Rise isn’t open by the end of the year, it whispered. You could see it next year anyway. I’m no Luke Skywalker or Ahsoka Tano when it comes to resisting the lure of the Dark Side, apparently. I’m barely even an Anakin Skywalker. 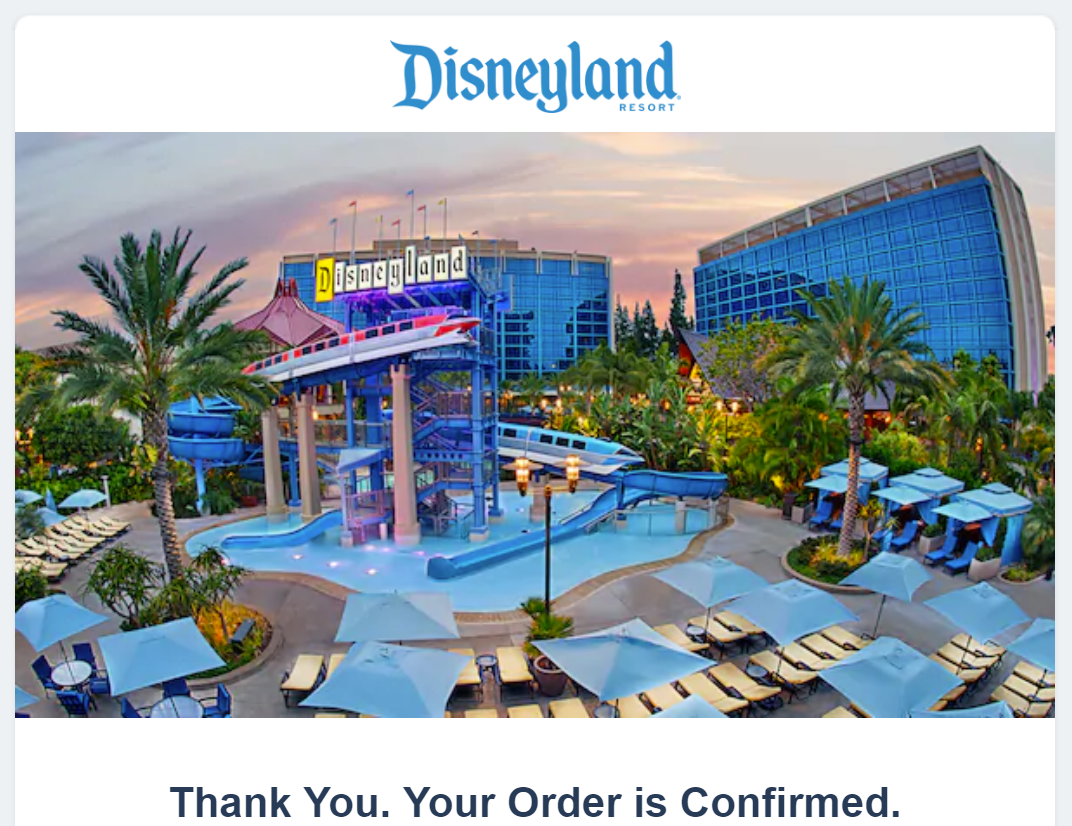 So I’m going to Galaxy’s Edge later this year. And then next year during Celebration, too. Because this is who I am now, a mindless husk driven mad by the galaxy, the one both far, far away and the one that’s merely an approximately 11 to 12-hour flight away.

At least I can just look forward to it instead of incessantly craving the possibility. Now I just get to spend months hoping eBay resellers didn’t steal most of everything that wasn’t bolted down before I arrive.