The Best, Worst And Weirdest Guest Skaters From The Tony Hawk Games

The Tony Hawk skateboarding games changed a lot from the start of the series in 1999, through multiple sequels and spin-off, before its mediocre end with 2015’s Tony Hawk Pro Skater 5. Some games were open world, some were more grounded in reality, others were more over the top and some included crappy plastic board controllers you had to stand on top of in order to play. But while many things changed in the franchise over the years, there was one thing that always could be counted on, guest skaters.

Some of them were cool, some were really dumb and some make you wonder how the hell they even appeared in a skateboarding game. 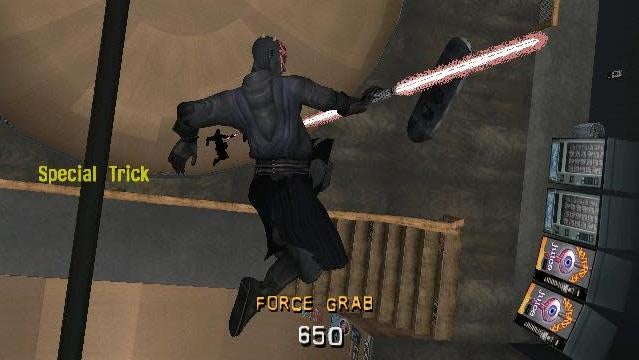 First seen in Star Wars: Episode I, Darth Maul is an evil and powerful Sith warrior who was once the apprentice of Sheev Palpatine, better known as the Emperor. After killing Qui-Gon Jin, Maul was cut in half by Obi-Wan Kenobi and then came back, because The Clone Wars TV show needed a cool villain.

It seems, though, before he went and got cut in half, Darth Maul grabbed a hoverboard and hit some ramps and rails. Darth Maul’s force abilities seem like a great fit for skateboarding.

However, he also decided to bring his dual-bladed lightsaber with him, which seems like less of a great fit for skating. Also, when you select him at the character select screen, the shop owner in the back of the store gets force choked. Quit being a dick, Darth Maul. 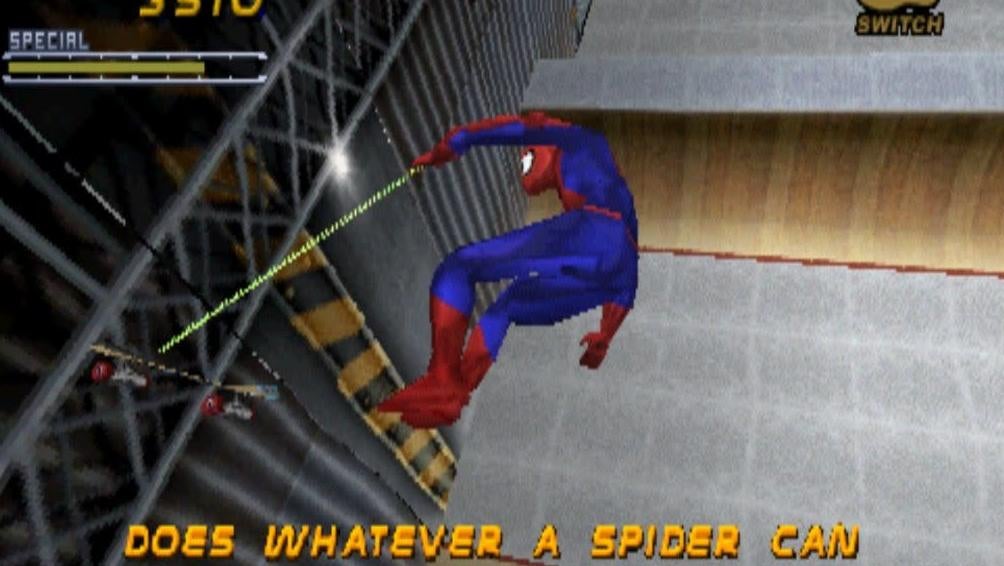 Spider-Man is unlockable in THPS2 once players have beaten 100 per cent of the game using a custom created skater. Or he is unlockable if you just use cheat codes, which is what I did as a kid. The character model featured in the game is straight out of the PS1 Spider-Man game, which was also made by THPS2 developer Neversoft.

Rival skater trying to beat your score, web-zip their board away from under their feet. Also, when you unlock Spider-Man in the game you unlock a video of a real-life skater wearing a Spider-Man costume and rolling around a skatepark. Which is… interesting. 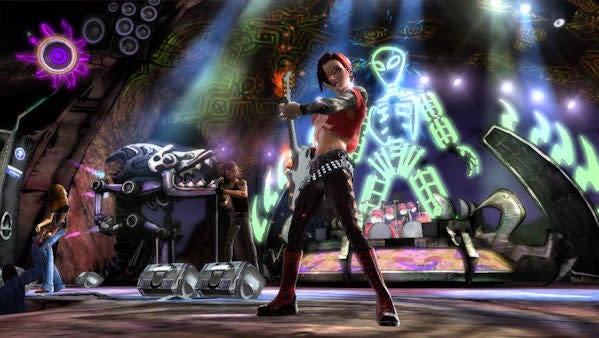 Judy Nails is one the more popular and well-known original guitarists from the Guitar Hero franchise. She is hard rock and punk rocker and probably could kick the arse of most of the other guest skaters on this list.

This model is directly inspired by her appearance in Guitar Hero III, which was developed by Neversoft, who also developed most of the THPS games.

I assume Judy Nails has a trick involving a guitar. I say assume because I can’t actually find much info about her Proving Ground appearance online.

I found one short video of someone playing as her, but the video is mostly just the person zooming in on her face and body. Which is not what I was looking for, creepy YouTuber. 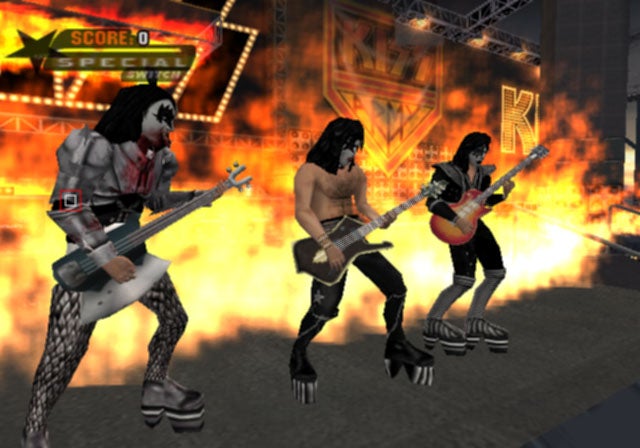 From: The Band KISS

Gene Simmons is not a great person. He is an arsehole and sleazebag who these days seems more like a grumpy old dude wearing cosplay than an actual rockstar. And for someone reason, he was included in Tony Hawk’s Underground.

Not only is he featured in the game as a playable skater, but his whole band and a KISS concert appear in the game too.

I don’t hate KISS music, but as a younger boy, I remember not caring about finding KISS in my skateboarding game. The fact that they have an entire level dedicated to them is also odd. You even collect the letters KISS around the map, which unlocks a music video.

I do like that the KISS concert level is basically empty, with like 4 random people shuffling around. 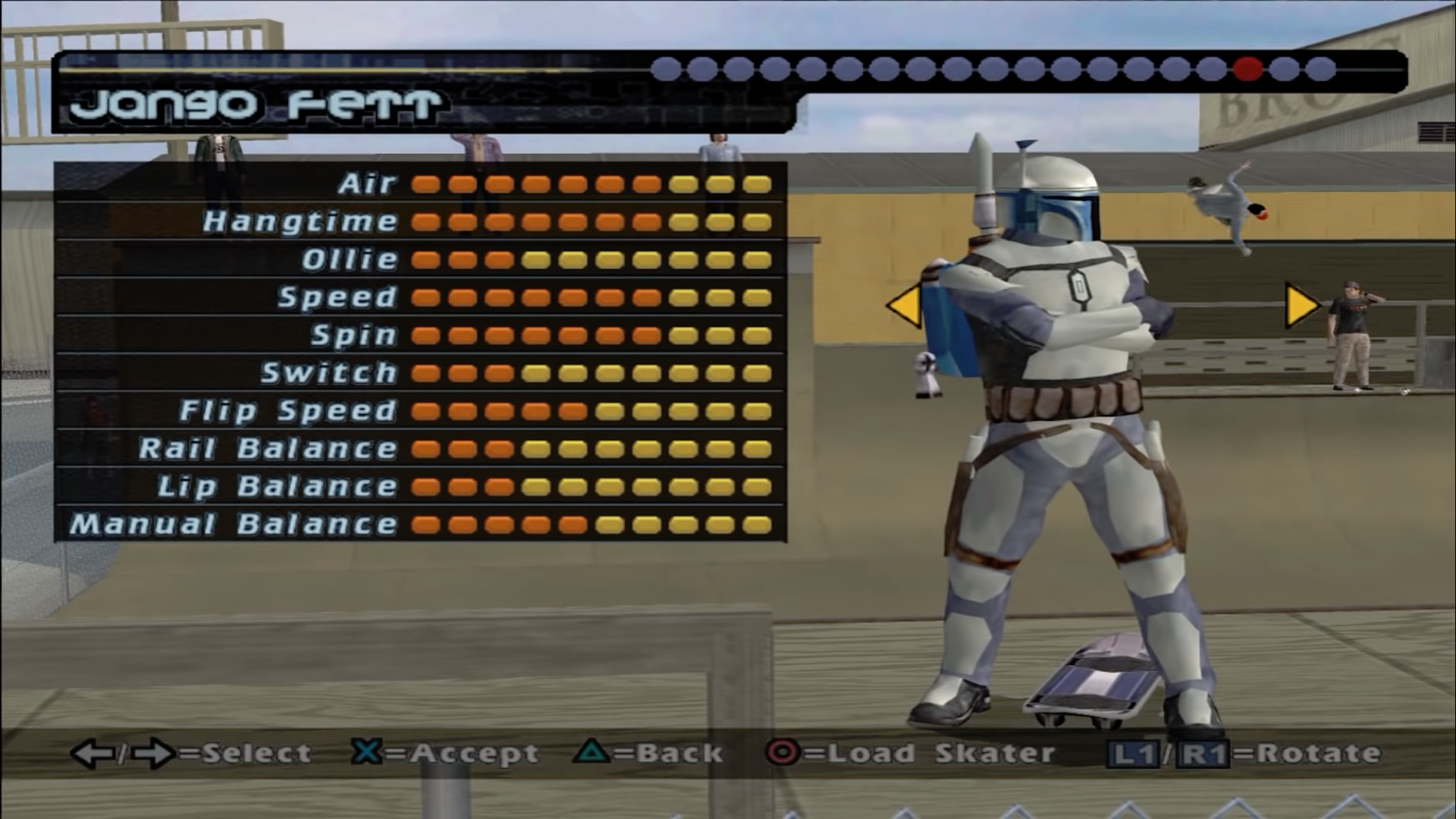 From: Star Wars: Episode II: Attack Of The Clones

Honestly, including either Jango or his slightly cooler son Boba Fett in a Tony Hawk game isn’t as cool as some might think. I know folks might disagree with me on this, but I’ve never gotten the obsession with these characters. They both die after not doing much in the movies. I get their suits are cool, but they aren’t that awesome.

Including Jango is also funny to me. Nowadays this would be Bobba, but back in the early 2000s, as the prequels were being released, the Star Wars fandom was given Jango Fett toys, ships, and games. There was a time period where Lucasfilm was trying to make Jango a “Thing.”

It didn’t work after folks saw the film and watched him get his head cut off in like a 20-second fight. Plus who wanted to skate as “Boba Fett’s clone dad.” He doesn’t even have a hoverboard, like Darth Maul. 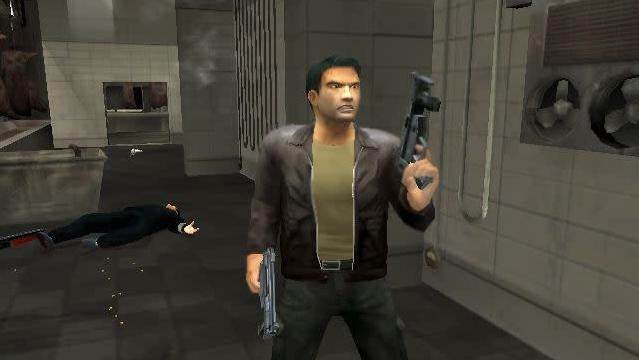 From: True Crime: Streets Of L.A.

Do you remember the game, True Crime: Streets Of L.A.? Probably not. Which means you probably don’t remember the main character from that game, undercover cop Nick. But because True Crime was published by THPS publisher Activision and Underground 2 included basically 100 unlockable characters, Nick was thrown into the game.

The actual details on Nick are a bit hard to nail down. Some folks believe he isn’t actually unlockable in the game, instead needing mods or cheats to access him. Others claim to have unlocked him. And some even claim he is only playable if you have save data from True Crime on your PS2 memory card.

As it turns out, the Tony Hawk community isn’t that concerned with figuring out all the details about Nick. And honestly, can you blame them? 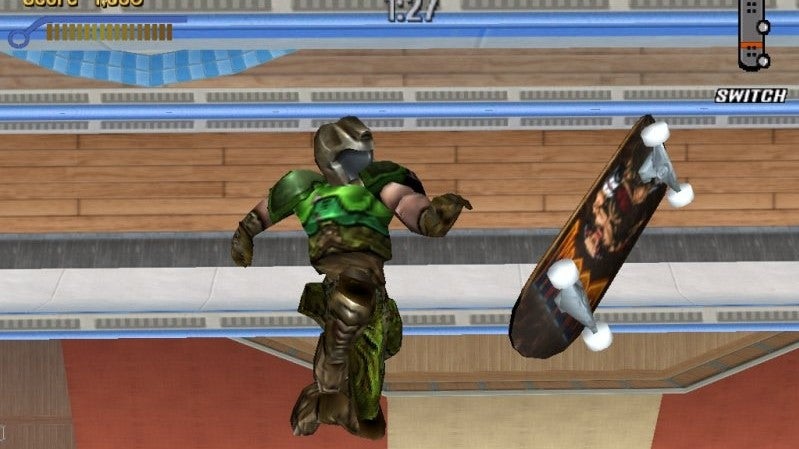 I’m not sure how much the Doomslayer’s abilities would help him in skateboarding. Sure he can hold a dozen weapons, survive massive falls, kill thousands of demons and beat people to death with his fists. However, none of that seems like it would translate into sick skateboarding skills.

But also, if anyone makes fun of him or does better, he can just run over, rip their head off and look around the skatepark, sending a message. After that, he ends up winning most matches of HORSE.

According to the Doom Guy’s stats, he is really fast and nimble, but he can’t jump. Which is accurate to the older versions of Mr.Doom Guy.

Back in the day, he could rip and tear for hours, but jumping was impossible. Which seems like it would make skateboarding hard, but again, use of violence makes it difficult for him to lose. Even if he just does flat ground tricks during a vert comp. 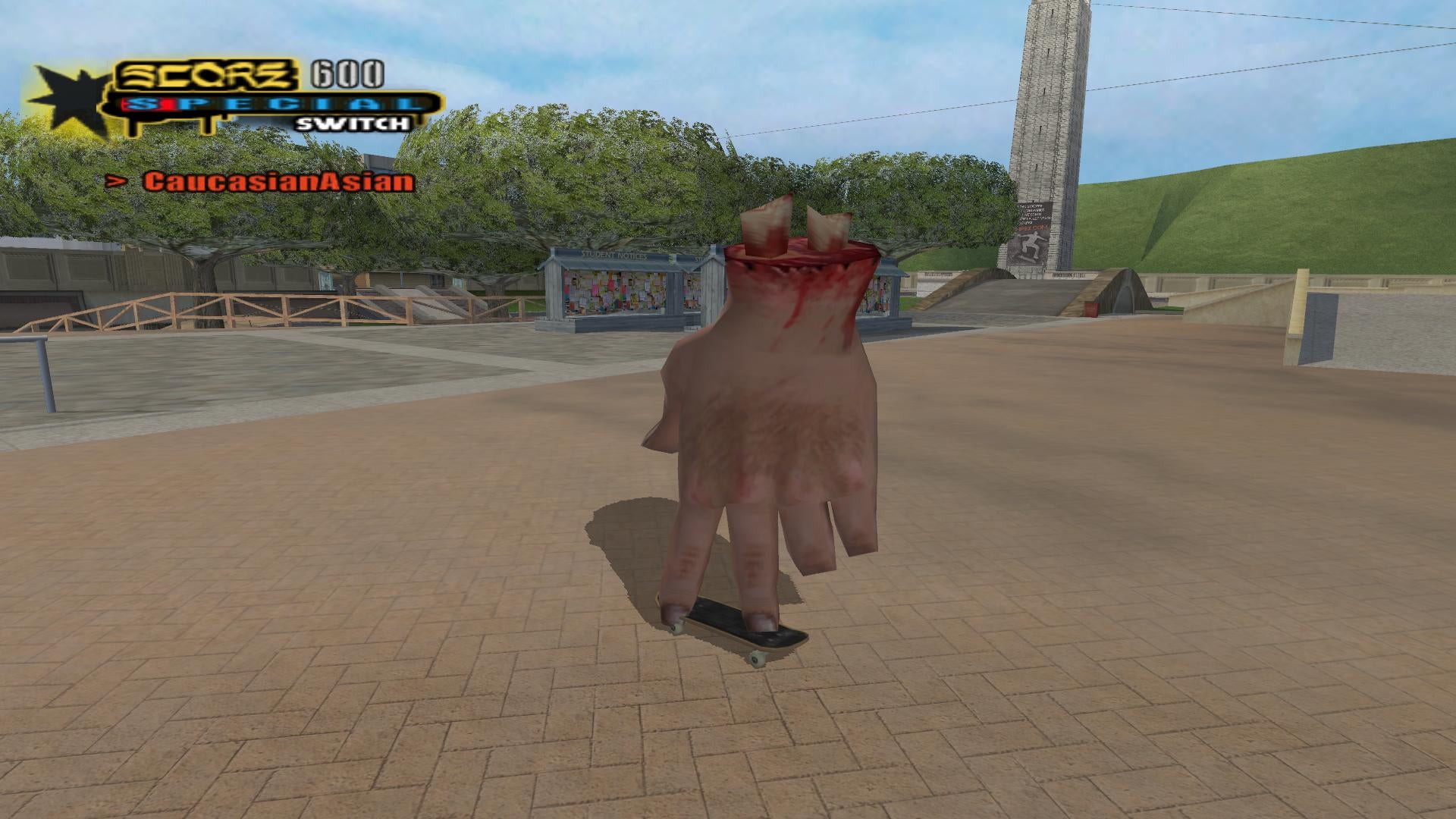 I like to think this bizarre character was created by a designer at Neversoft who was looking down at their hands and suddenly realised the next great guest character was right there. The Hand is, well, a giant hand.

According to the Tony Hawk Games wiki, The Giant Hand is a large severed hand “that is somehow capable of skateboarding.” Even the most dedicated fans don’t know how this thing works.

Most likely The Hand is a reference to those mini-sized toy skateboards, like Tech Decks, which were very popular around the time THUG 2 was released. And it is funny to watch a giant hand pull off tricks on a skateboard.

But it also hard to watch this thing move around and not feel uncomfortable, especially as you keep noticing the blood and bone sticking out. What was this attached to and will it seek revenge for us stealing its hand? No amount of skateboarding is worth angering a giant. 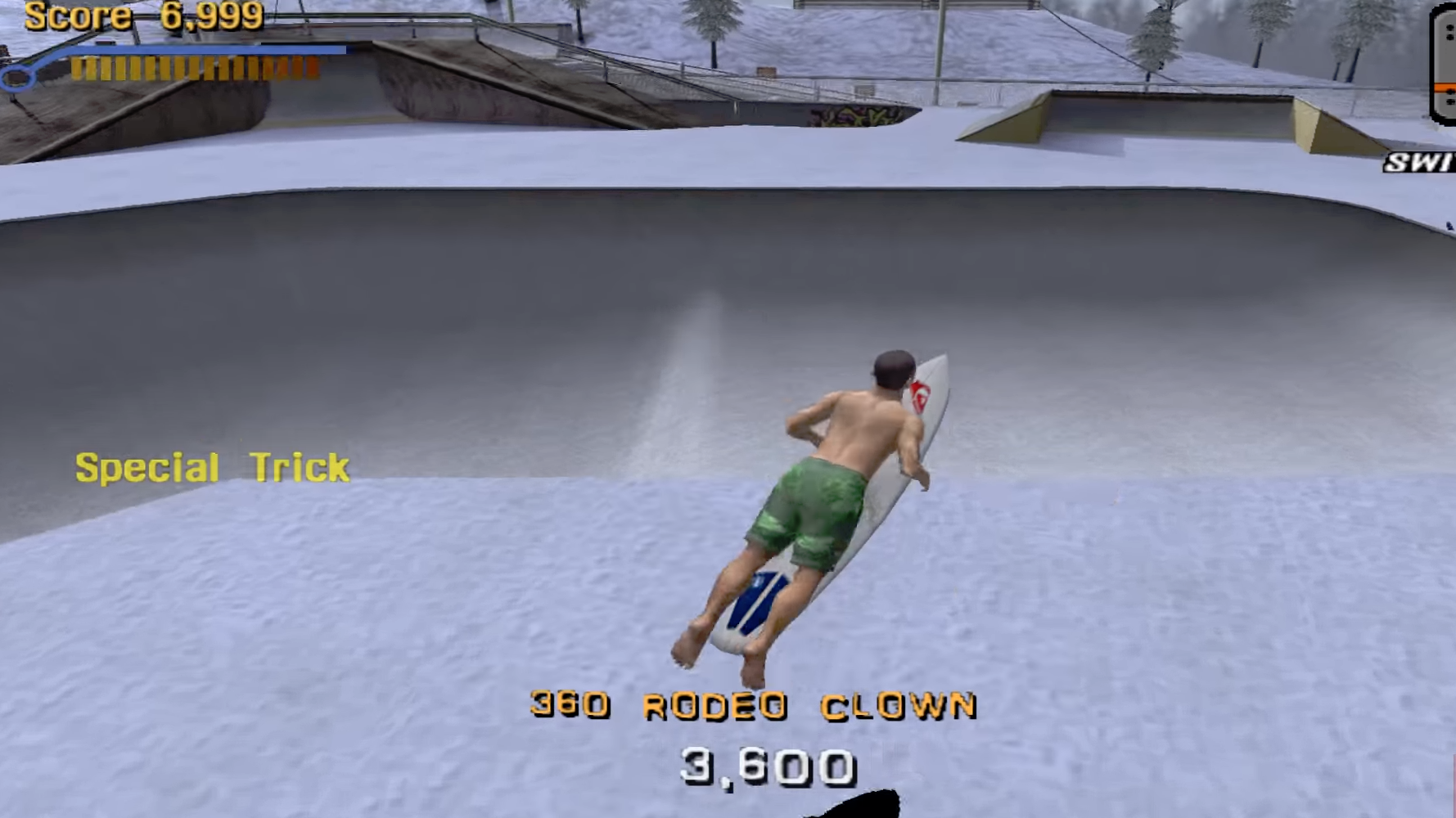 I don’t know much about surfing, but I don’t think being a good surfer makes you a good skateboard automatically. Maybe I’m wrong about that. Maybe surfing the waves does, in fact, make you a great skater. I do, however, feel very confident in assuming that a surfboard is not a great replacement for a skateboard.

No matter how much you wax it. Yet, Kelly Slater doesn’t care about logic or reason. He was asked to join Tony and his friends and decided to just bring his actual surfboard.

Kelly Slater appeared in his own game, Kelly Slater’s Pro Surfer, which was one of the many Tony Hawk-like games Activision was publishing around this time. So most likely he appears in THPS3 as promotion for that game.

The only thing I remember from my time playing KSPS was that for some reason you could play as Travis Pastrana in it and he wore his entire motocross outfit, complete with helmet. Consider that a bonus guest character on this list. 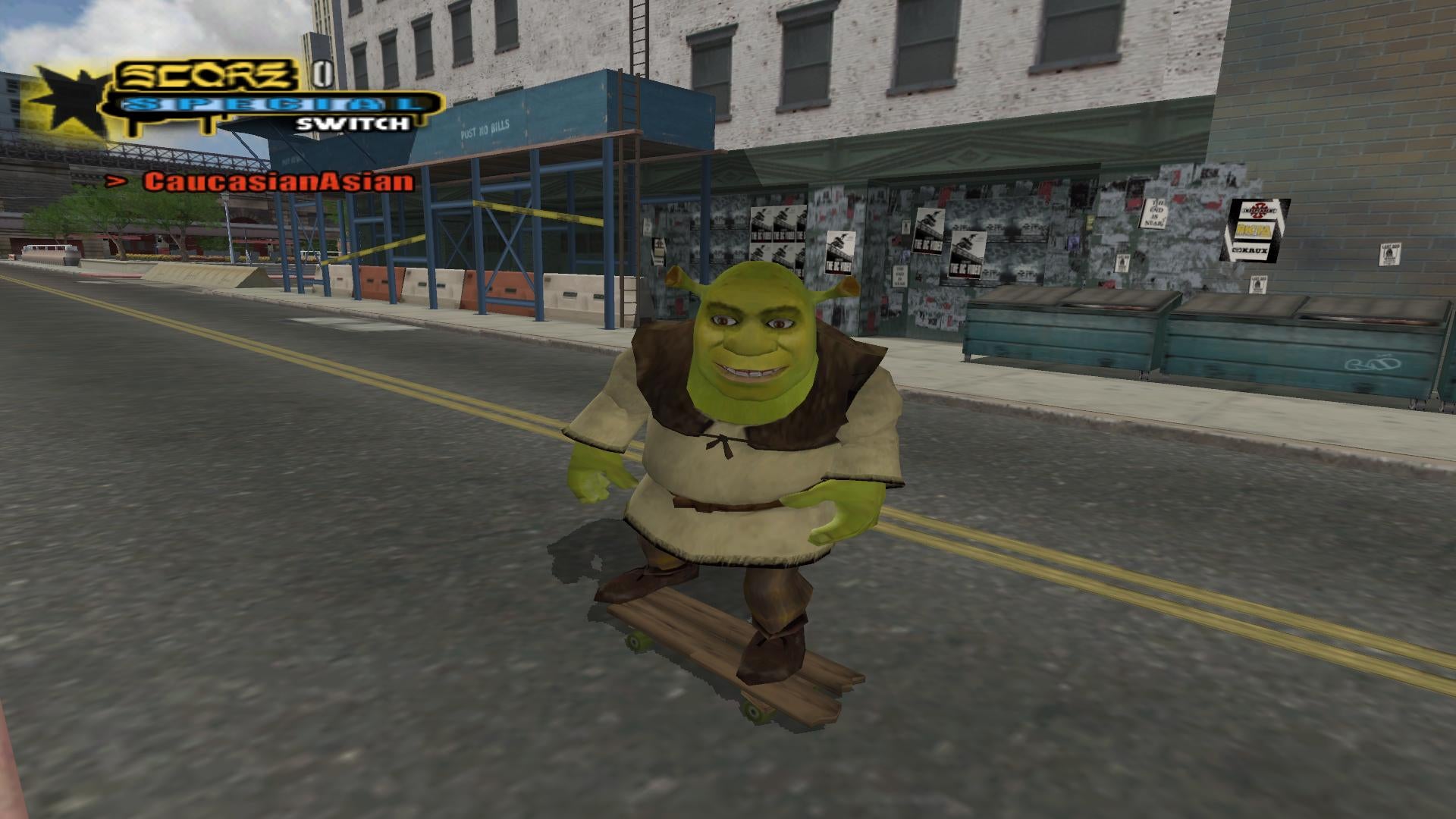 I know this is breaking the format a bit, but I also know that if I don’t include Shrek on this list there will be at least 500 comments telling me about Shrek.

He is included in this game as a promotion for the then-upcoming film Shrek 2. Activision was publishing Shrek games at this point and they also published the Tony Hawk games, so it seemed like a perfect fit to someone.

It should be remembered that Shrek’s inclusion in this game pre-dates the more recent internet obsession with the character. So back then, when a younger me played this game and found Shrek, I was confused. I’m still confused today, but now I can also ironically laugh at it. Also, he uses ear wax while grinding. Fun.

This is not a complete list. There are so many other guest characters in these games that if I was to cover them all this list would become one of the biggest things I’ve ever written. But maybe I’ll revisit Tony Hawk guest characters in another post one day.

For now, let me know who was your favourite guest character in the Tony Hawk games.