King of The Hill was on for from 1997 to 2010, aired over 250 episodes, won two Emmy awards and has been called one of the best-animated shows of all time. Yet unlike The Simpsons, which received many games across multiple platforms, the world was only granted one King Of The Hill video game and it sucked.

For those who haven’t seen King Of The Hill, or KOTH as I like to call it so I don’t have to type it out over and over, the show is set in Arlen, Texas. This is a medium-sized town where Hank Hill and his family live. They have some neighbours and a son, Bobby, who has various friends.

Unlike The Simpsons, KOTH was more grounded and got comedy out of situations like anger management, pest control, and infidelity. Hank Hill never went to space or became a zombie or became President of The United States. They just hung around Arlen, mostly, drinking beers and dealing with life, love, failure, and work.

This more grounded and slower pace might have been one of the main reasons the show never got many games based on it. And it also might explain why the first and only major game to star Hank Hill and the gang was a boring point and click adventure and puzzle game for the PC.

Simply named King Of The Hill, the KOTH video game was released in November 2000 for PC and Mac. It was developed by Flying Tiger Development, a company who is still around and helped port Kerbal Space Program to consoles not long ago. They also made DVD menus for Disney films.

There isn’t a lot of information floating around on the web about this game and not many people seem to have played it and even fewer have uploaded footage of it. Luckily, one YouTuber has uploaded a full let’s play of the game so we can all see what this thing was.

The game is two small adventures packaged together, with some websites referring to the package as “King Of The Hill: Block Party,” though the official developer website doesn’t refer to the game by this title. Anyways, the two stories included in the game are Hootenanny and Texas Hutnin’.

In Hootenanny you play as a new resident that just moved on to the street that Hank Hill and the gang live on. You meet them while taking out the trash and they invite you to the block party.

The party consists of … a collection of bad mini-games. And like any good and fun party, each activity is rigorously scheduled. And this schedule isn’t just background detail, no, you actually have to wait different amounts of time before you can play each game.

Luckily, you don’t have to wait in real time for hours, but it is still wild to me that this game is mostly just checking your in-game digital watch, waiting for the next mini-game to start.

The actual games themselves are bad and consist of stuff like a scavenger hunt in an empty house and bean bag tossing game. It seems Hank and Peggy Hill suck at throwing parties. Also, for some reason, everyone in this game is a close-talker and is ALWAYS getting right in your face to talk to you. They also have dead eyes that don’t blink or move enough. 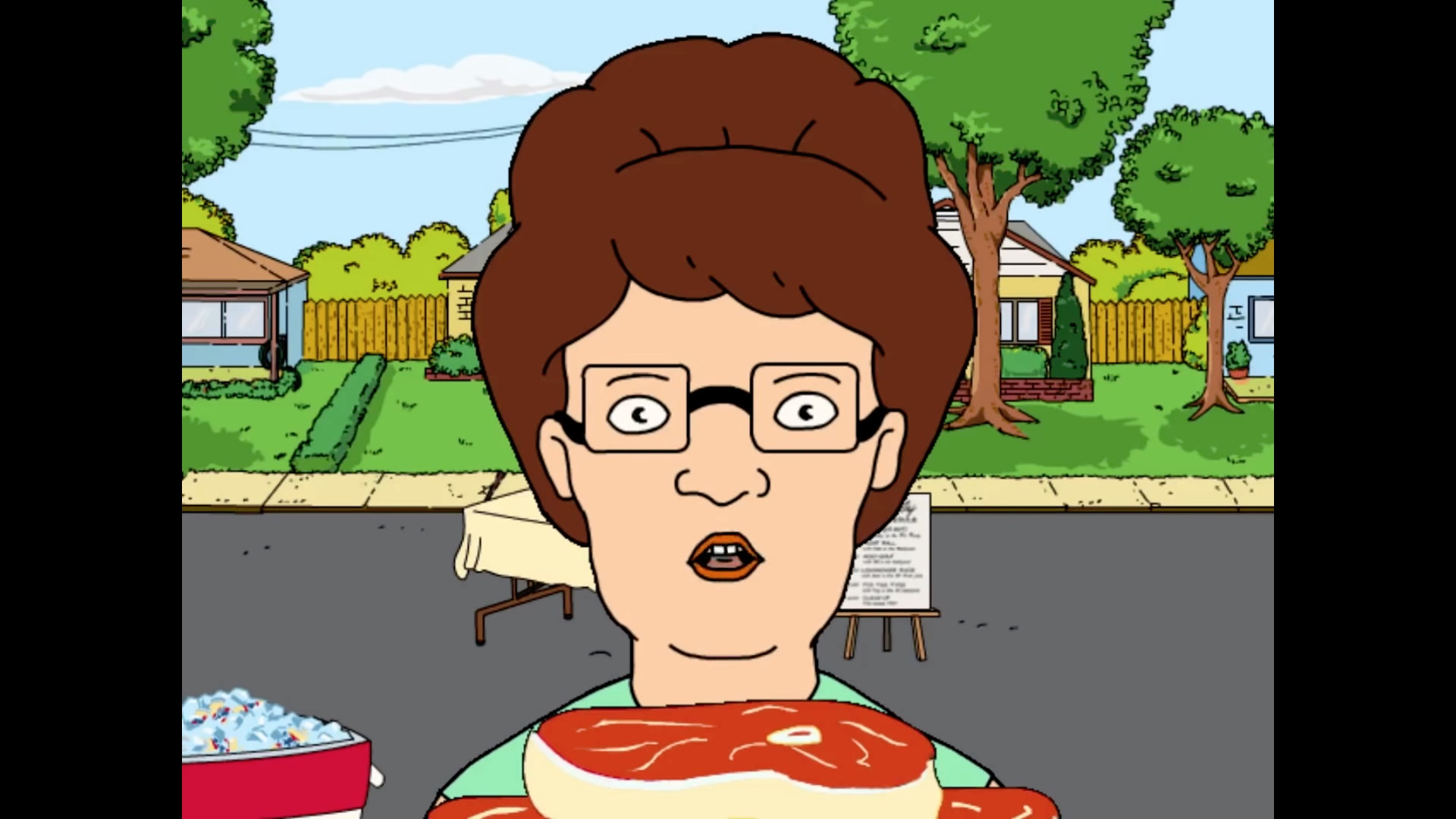 The other story included in the game, Texas Huntin’, is all about you and the gang going out hunting. You help pick where to hunt, what to bring and then once you arrive the game actually gives you a gun and lets you shoot some stuff. The gunplay is stiff and choppy, but hey, it beats throwing bean bags at a wall.

Unlike the block party story, Texas Huntin’ is mostly set in the wilderness and fields of Texas. So you mostly sit around, waiting for animals, missing shots and waiting some more. Which is an accurate recreation of hunting, but it doesn’t make for a very fun video game. 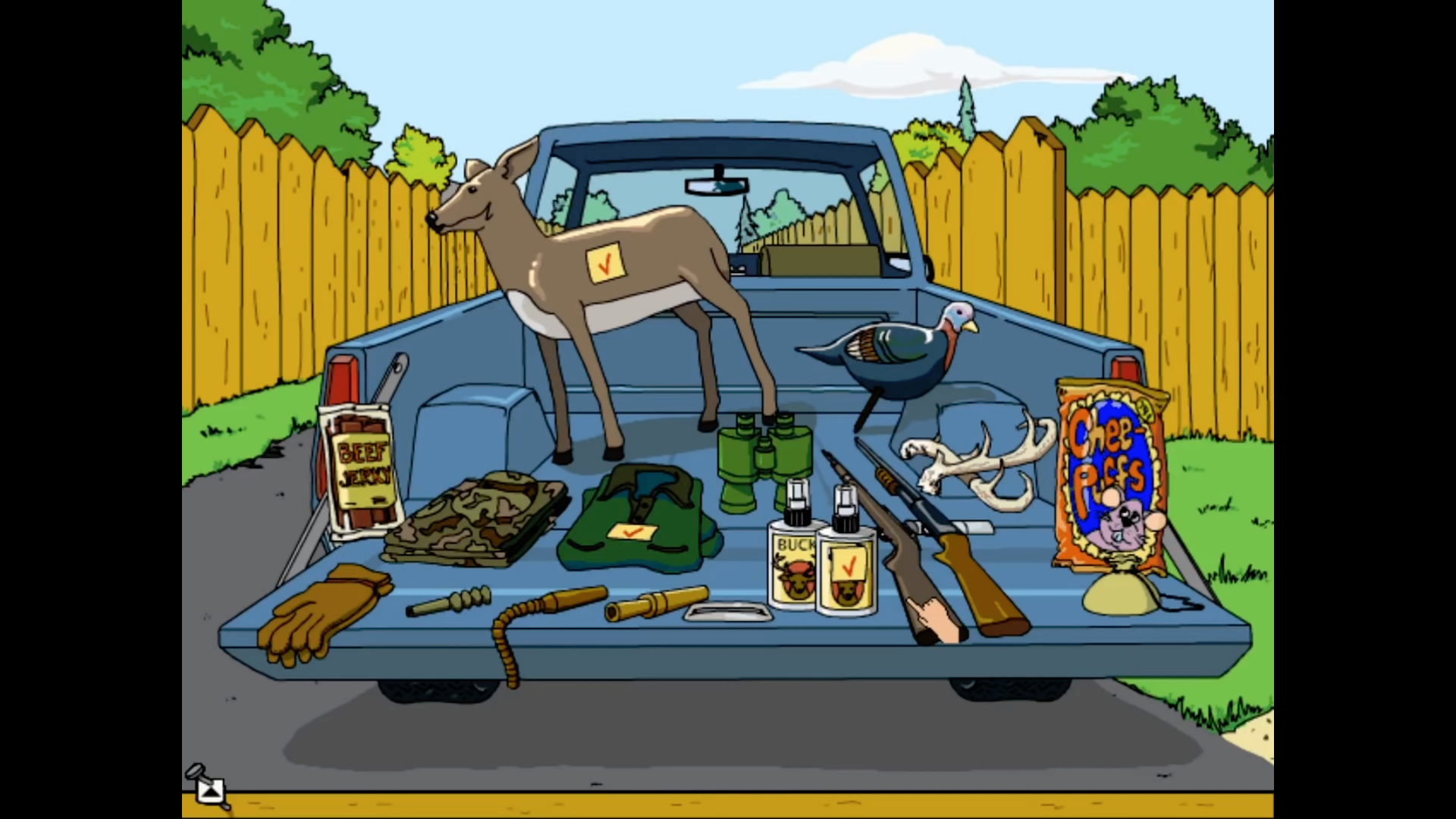 King Of The Hill, the video game not the cartoon, looks really nice and has all the original voice actors. I even laughed at some of the writing, which feels ripped right out of the show.

For a nearly 20-year-old game, it also has nice animation and art. Altogether, the game feels like I’m watching an episode of the series. Sadly, all this effort is wasted on a boring mini-game collection. And over two decades later, this is still the only main King Of The Hill game ever made.

Some KOTH characters appear in the free-to-play Animation Showdown, which is a card game featuring various animated characters including Bender, Bob Belcher, and Peter Griffin. It’s a mostly fine game, but Hank, Peggy, and Bobby deserve much better.

With over 13 years of stories and characters, there is plenty of stuff to work with to create a game based on King Of The Hill that is more exciting than the one we got in 2000. What about a game based on the video game Hank becomes addicted to in Grand Theft Arlen? Or maybe a game all about Hank Hill trying to fix his truck but people keep interrupting him? Honestly, almost anything would be better than the one boring PC game we got two decades ago.

With rumours that the show might return, we might get another game starring the king of propane and propane accessories. And while I’m wishing for video games based on TV shows I love, where’s my Bob’s Burgers video game? And no, that digital pinball game doesn’t count.