The Highs And Lows Of Spilling Drinks On Your Laptop

A laptop computer is an amazing confluence of technology, condensing an entire desktop full of hardware into a compact space. That space is an easy target for a cup of coffee or can of soft drink, and there’s nothing quite like watching liquid pour into several hundred or thousand dollars’ worth of electronics. It’s a feeling I know all too well.

I am normally incredibly protective of my computer hardware. There’s a whole article on how meticulous I used to be about it. I say “used to be”, however, because I wasn’t paralysed from the chest down when that article was written.

I have to spend a lot of time in bed lately, recovering from multiple surgeries following an incident last year. That means a lot more laptop time and a lot less desk space. While I normally keep food and drink away from my keyboard, my modest over-the-bed table pulls double duty as my work desk and dining room table.

That’s how I wound up dumping a can of Mountain Dew Kickstart into a $US3000 ($4273) Alienware laptop. The one I recently reviewed, actually.

It isn’t the first expensive piece of computer equipment I’ve filled with delicious beverage. It probably won’t be the last. It is the latest, though, so the feeling of gut-wrenching dread is fresh in my memory.

My wife, Emily, was pulling the table away so I could transfer from the bed to my wheelchair. The table rolling over carpet (we have lumpy carpet, I guess?) caused a can of Energizing Mango Lime Kickstart to fall, spilling its contents into the Alienware M17’s keyboard and the speaker grill that runs below the alien-shaped power button.

The moment liquid flows into the keyboard is the worst. The rhythmic sloshing of can contents into the costly electronic components. Watching it seep into the guts of the machine, where the most valuable, difficult-to-replace bits are tucked away.

I panicked. My wife panicked. “Get a towel!” I shouted, hastily pulling the plug from the unit and holding down the power button to turn it off.

It took about 30 seconds for my wife to find a towel, but it seemed like an eternity. I dabbed away the moisture on the surface of the unit. I picked it up from my desk, and yellow liquid poured from the keyboard, forming a baseball-sized puddle on my desk.

“I guess we’ll have to wait for it to dry out,” I said, setting the unit down on the desk after giving it a good wipe down.

Waiting for the laptop to dry out is the best thing to do in this sort of situation. It’s important to leave the computer alone and unplugged until you are completely positive there is no way for the water or coffee or high-fructose corn syrup to short anything out. The last thing you want to do is turn the power on.

As I set the Alienware laptop down, I accidentally pressed the power button. Astonishingly enough, it powered on without a problem. I quickly powered it off when I realised what I’d done, but I held the power button down too long, rebooting it instead. Again, it powered on fine. Defying all logic, I decided to just keep working on it. It hasn’t had a problem since. 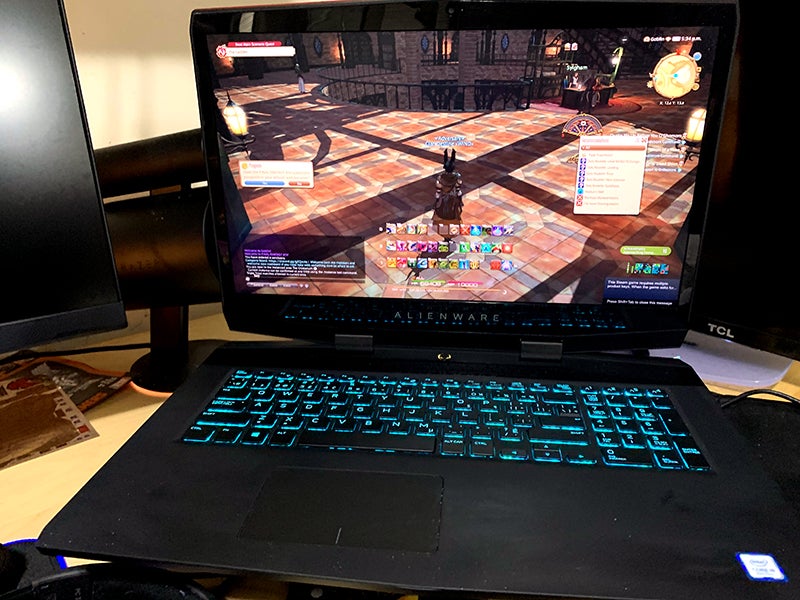 That was three weeks ago. Three weeks and two more energy drink spills ago. The second and third energy drinks that spilled on the laptop were the cat’s fault.

This cat in particular. His name is Jack. We’ve had him for three years, and he’s only just now started coming to me for pet-pets. He has a very long tail with a bend at the end. He doesn’t realise how long it is. It tends to catch on 475ml energy drink cans. 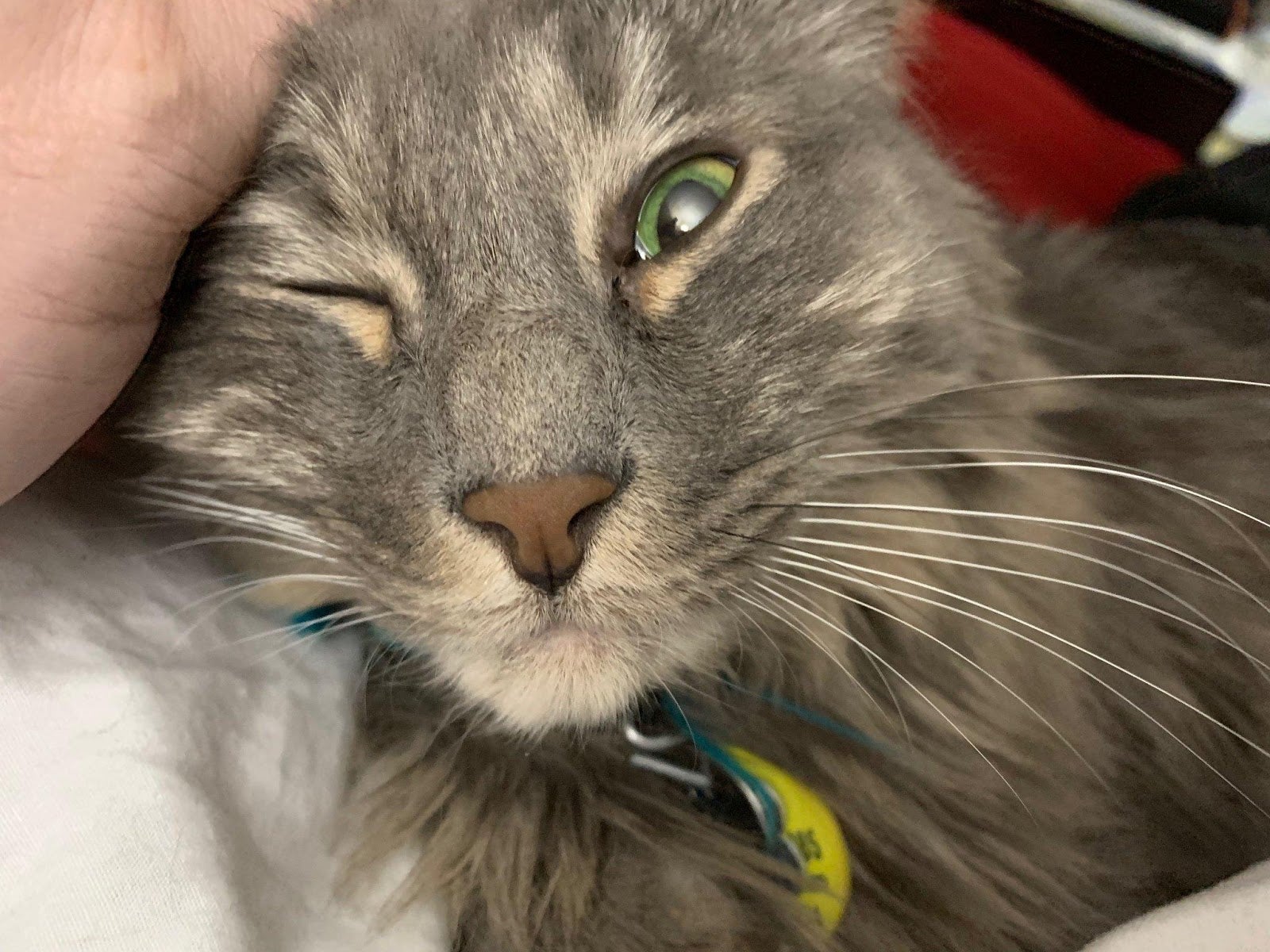 Or maybe he knows exactly what he is doing and wanted me to stop staring at the Alienware M17’s screen instead of his fluffy kitty face. Either way, the Mango Lime has been joined by Midnight Grape and Orange Citrus. I was a bit more alert those last two times, so not as much went into the laptop. It still dripped, but it still worked.

Either the Alienware M17 turned out to be some sort of magical spill-proof marvel of technology, or I got extremely lucky. As horrible as the initial spills were, they were almost worth it for the supreme feeling of relief that washed over me when I realised it was going to be OK.

Not all of my laptop spill stories have such happy endings. Take my Lenovo Yoga Pro 2.

I fell in love with this silly touchscreen laptop when it came out several years back. It was thin and foldy and relatively powerful for what was essentially a convertible Windows tablet. I read reviews. I watched videos about it. I scrimped and saved until I had the $US1100 ($1567) or so it was going for at the time.

It was my bedside video companion. My bathroom Candy Crush machine. My back patio, smoking a cigarette (I haven’t had one in over a year now), looking at keyboard sales on Reddit friend.

Eventually I passed the Lenovo to my wife. She had no PC of her own, doing most of her internetting on an iPad, and that would not do. She kept it on a little desk in our dining room.

Eventually our twin boys, then seven years old, started using it to watch YouTube. They’d huddle around it, drinking tall cups of frosty cold milk, fighting over who got to control the touchpad and keyboard. You see where this is going.

I still remember my wife standing at the desk, holding up the Yoga Pro 2 by one corner, milk pouring out of it. There were tears in her eyes. “Can you fix it?” asked my son Archer, not understanding what had happened. It was obvious the dairy-flooded machine’s chances were not good. I’m getting a little choked up writing about it.

The Yoga Pro 2 never powered up again. We let it dry for a month, plugged it in, and nothing.

Because my wife and I are horrible pack rats, we let it dry for another six months inside its faux leather pouch. When we pulled it out, it looked like something out of The Last of Us, once-gleaming technology overrun with green mould. I think she threw it out. I really hope she threw it out.

“Don’t drink around your laptop.” I’ve heard that advice many times in the weeks since the first spill. Like I said, my circumstances are complicated.

When I do get to spend time in my wheelchair at my desk in my office, I keep my drinks on a separate table from my beautiful keyboard babies. I keep my keys and my trackball on an elevated mat with a waterproof rubber bottom.

When I am in bed, however, I need my caffeine or I will fall asleep in the middle of writing lengthy articles about spilling things, possibly spilling more things in the process.

Now that I’ve had my triple Kickstart scare, perhaps there is more I can do. Perhaps I’ll get a cupholder I can clip onto the bed table, keeping drinks safe and secure. Or fashion a splash guard around my laptop out of laminated cardboard.

Since the Lenovo incident, my children have firm knowledge of what completer equipment they can and cannot touch and know never to drink around it.

Maybe I should get rid of Jack.

Or start buying cheaper laptops and keeping my fingers crossed.

Have you spilled something into a laptop computer? Coffee? Tea? Soft drink? Soup? Hot wax? Share your horror stories in the comments.